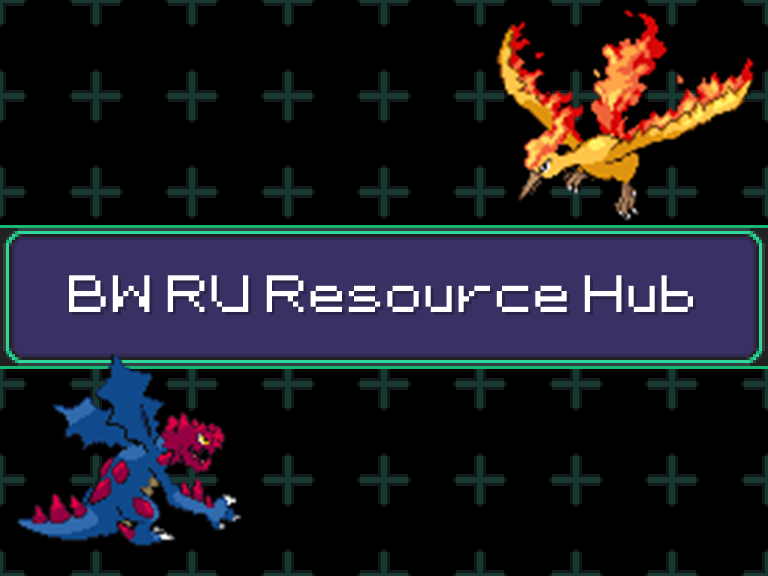 So while I usually play RBY, I do play other RoA formats quite frequently (GSC usually). I was working on a project with some friends (Molk and some BW oldheads) designed to dispel misconceptions about BW RU at one point, but due to various problems, it never got finished. However, I didn't really want to let all these resources go to waste, so I'm taking matters into my own hands to get it all out there. So here we are with the BW RU Resource Hub!

Unfortunately, BW RU is one of the most misunderstood tiers of all time. Quite frankly though, I don't blame it for turning out that way. It was a very new idea, and often seen as the awkward kid in the corner of your primary school classroom (me!). Hell, people didn't even know what to call it: LU or RU. As a result of this and now-archaic tiering philosophy, it definitely got the short end of the stick. However, despite everything, it's actually a fun metagame.

Before I get into the data I've sorted out among the people helping me out, here's a table with all the resources (that I could find) that were ever released for BW RU. I also included forum post mirrors in case they're taken down. It also serves as a nice way to look into the old QC process, as well as the exchange of ideas at the time.

This table compiles most, if not all, of the BW RU Ladder Usage Stats over the years. There's a lot of history in here, from bans to tier shifts and whatnot. It's really interesting. There are also two lots of RUPL usage stats I found in recent times here and here. You can likely grab moveset usage for the RoA Rotational Ladders if you go to the index of /stats/.

You may need to highlight the text or something to move around the table, as XenForo sucks for this kind of thing. I converted it from a Google Sheet, so if you want to view it that way, go here.

With the help of Molk and a few other oldheads, I've been able to produce a Speed Tier table representative of the current BW RU Metagame. This considers everything from stat boosts to Unburden and Hidden Power IVs. It was a bloody nightmare to convert from my Google Sheet, but it's worth it. Hidden Powers that lower Speed to 30 include HP Fire, Rock, Psychic and Fighting I believe. Normally you're seeing HP Fire or Rock, the latter of which is commonly used to out Moltres.

This doesn't consider stat debuffs which I really didn't have the time to do at the time. Speed Creep EVs, such as what Druddigon often runs for the Base-50s, are also omitted for the sake of not devolving into semantics. Ergo, it also doesn't consider attempts to underspeed for Trick Room, but Speed dropped for Gyro Ball is (for Escavalier and Steelix).
There may be better ways to arrange this, but I just spent an hour and a bit to convert this from an even worse-handled Google Sheet.
Last edited: Nov 5, 2020

This is a heavy WIP, so bear with me! All Pokemon in the Speed Tiers above is being included in this.

My knowledge of the tier is a bit limited on its own, so there's a lot that can be added. I encourage criticism, suggestions and other ideas to improve this!

Alright, that's everything for now. Just spent like an hour converting the Usage Stats Repo and Speed Tiers into a forum format. A ton of work went into this, with help from many old BW RU players, and I'm satisfied to see it all actually reach the forums now. Hopefully this'll help some people get into the tier, as it's probably one of the most underrated out there. At the same time, it's one of the most misunderstood by a long shot, so this will likely help a lot. I really enjoy playing this tier and am totally down for games with people who're interested.

There were other details on the sheet, but it was mostly banlist history and we never got to "testing" how these Pokemon actually worked in practice in the format. Ergo, a lot of it is theory and war flashbacks that don't really amount to much.

On a side note, I also did this RMT a while ago while doing research on the metagame. It's sort of similar to DragMag, I guess?

I went and added a bare-bones Role Compendium to that last reserved post, as well as a threatlist I generated from the Speed Tiers for assistance. There is a lot of potential to improve and refine it, so if anyone wants to suggest stuff, go ahead and ask! My knowledge of BW RU is a bit limited on its own, so it's an opportunity for me to learn more as well.

On a side note, the Speed Tiers and Usage Stats now have a proper table header for aesthetic purposes.
Last edited: Nov 5, 2020
You must log in or register to reply here.
Share:
Reddit Pinterest Tumblr WhatsApp Email Link