Moderator
Here we are: CAP 26's process is coming to a close. Though it was a bit more normal of a process after the multi mon framework of the CAP 25 starters, Equilibra stands out among the gallery of CAPs all the same. From concept on, this set of scales forced us to think differently than most of us normally do with this game, be it considering the pros of delayed moves, figuring out what we can "checkmate" when, or replacing Dragon Dance as "DD" with Doom Desire in at least 75% of the Discord's minds. When it came to height and weight, with some help I figured it should be about .8 meters tall, or about 2.6 feet tall, based off of how the Scales of Justice are often held by larger statues of Lady Justice. Weight wise, I looked to another justice inspired value: 113 pounds (or 51.3 Kg), the number of US Supreme Court Justices in history. I'd like to thank the community at large for such an enjoyable process, the moderation team for their guidance as we moved through it, and the real heroes of the project to me: the TLT of GMars, Jho, Jordy and G-Luke who were by far the best team I could have asked to work with. Equilibra has arrived, and justice demands retribution! 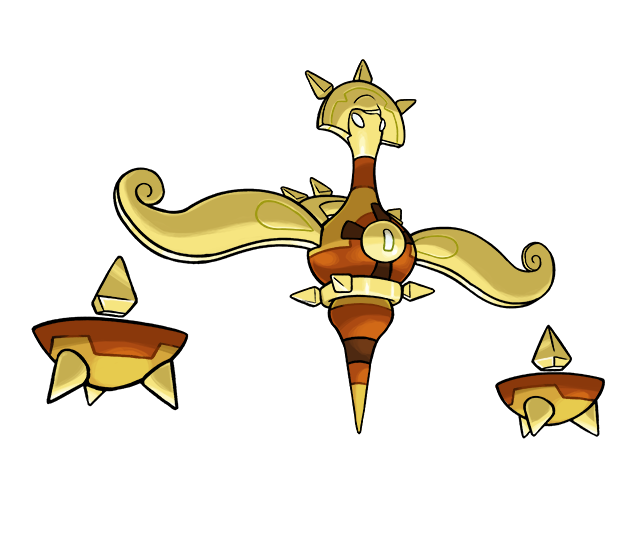 Justification - Given we're attempting to create a Pokemon that uses one of two specific moves, this is an Actualisation concept. Future Sight and Doom Desire are incredibly unique moves, which see limited usage in spite of their high base power, and ability to have a target Pokemon struck twice in the same turn. In using CAP26, the aim is to create a Pokemon that inspires a feeling of being able to trap opponents, to establish win-win situations.

Questions To Be Answered -
One Pokemon which has been seen to fairly reliably use Future Sight is Slowking. What can we learn from Slowking about what makes a viable user of Future Sight? On the same token, what has led Jirachi to not be effective at using Doom Desire, and other Pokemon to not effectively use Future Sight?
What is the optimum usage of Future Sight/Doom Desire, both on the turn immediately after using the move, and the turn on which the move will land?
Should the user of Future Sight/Doom Desire be primarily helping itself, or other teammates. If helping itself, what is the aim? If helping teammates, then what types of teammate?
Are Z-Future Sight and Z-Doom Desire mandatory, or just useful tools?
Explantion - Doom Desire is almost one we've done before, as people from the era of Cawmodore probably remember. Whilst little has changed since then, we have seen Future Sight get another power level increase since then.

This isn't a case of using a move which we know can't be used - we can look to Slowking (Future Sight) or Dialga (Balanced Hackmons, Doom Desire) for inspiration on what makes these moves workable. At the same time, we know that they're not automatic locks in spite of their high base power, allowing us room to explore what makes these moves often fall flat.

The beauty of Future Sight and Doom Desire as concept leads is that they don't massively restrict our ability to choose a direction right from the gate - focussing on these moves for their ability to strike twice in a single turn likely produces a Pokemon that is very different from focussing on these moves for their ability to force specific Pokemon out for a teammate to switch in. Whether we create a Pokemon that breaks walls, or pivots around, or supports a very specific partner, or something else entirely, these moves make for a concept that should be both interesting to implement, and with many avenues to explore.
Click to expand...

Changes: As of this post, Equilibra no longer learns Toxic, Dragon Tail or Whirlwind

Enjoy the inaugural battle here, where G-Luke lures my Equilibra and I CC his! Unfortunate it couldn't show off much but funny all the same.

Congrats on another strong addition to the CAP collection

Congrats on the completion of CAP's 28th design. It was fun while it lasted.

Equilibra in the replay, oh dear. Congratulations everyone!

Oh this was a fun one after the utter chaos of the framework. Very nice work and congrats!

When the meta is teched against you from the inaugural battle.

A fantastic process everyone! I'm so glad to have been a part of it. Thanks to the excellent TLT!

-Voltage- said:
This mon is going to change the meta and I am very much looking forward to its nerfing process later using it in CAPTTV
Click to expand...

Equilibra starting off strong from its first battle!!!

I'm excited to see how the meta develops around it! However, due to that replay of 2 Equils being sacked doesn't show much hope, lol.

yeet em with that delay

Well it was rather interesting to see Equilibra turn out the way it did.

Edit: Thanks Dogfish44 for the wonderful concept. More importantly, thanks for lending me the opportunity to involve myself, even if it wasn't all that much.
Last edited: Jun 21, 2019

Behold the greatness of Bamboo

Congrats to everyone, that was a great process and an awesome mon, I'm pretty glad to be part of this.
You must log in or register to reply here.
Share:
Reddit Pinterest Tumblr WhatsApp Email Link