Hey everyone, it's finally here! Thanks for being patient with the wait, but CAPTT IV sign ups are now live! I will be returning as the host of CAPTT again and this time EpicUmbreon29 will be joining me as my co-host.

Welcome to the CAP Team Tournament (CAPTT) Signups! This season we are switching it up and will be having six teams duke it out in the following five formats: Gen 7 /Gen 7/ Gen 7/Cap LC/ Gen 6. Cawdet is positively banned in CAPLC. Signups will conclude on around July 5th or 6th, which is when the draft will begin.

For those of you unfamiliar with CAPTT, but interested in participating; CAPTT is a team tournament similar to that of SPL, in which our CAPtains bid on players who have signed up to assemble a team of some of the best players possible in order to win the tournament. During the auction the CAPtain who has bid the highest on a player will then add that player to their team. Teams will face-off and select one player to fill each of the five battling slots. If a team wins at least 3 matches against their opponent, then that team wins the week. The two teams who have the best weekly winning ratio will then compete in the finals, in which the winner will be crowned. If there is a tie to get into the finals, then the overall win-loss ratio of all matches within the previous weeks will then determine who makes it into the finals.

The CAPtains (listed first) and their assistant managers (listed second) have been selected and are listed below, as well as their team names. Assistant managers will be able to play in the tournament and we will be deciding on their prices over the coming weeks. The prices of each assistant manager will be subtracted from their team's 100k for the auction. By the end an auction, each team must have purchased enough players to be able to fill all 5 slots and have 2 substitute slots filled.

Rat With Wings and Frat Dude will lead the Reject Reverbells

Name: HeaLnDeaL and SteaLnDeaL on PS
Tiers Played/Interested In: SM, CAPLC
Non-player roles: I'd also like to express interest in being a Team Artist
Any foreseeable inactivity: no
Click to expand...

Name: SpheaLnDeaL
Tiers Played/Interested In: All of 'em
Any foreseeable inactivity: The second week of August I will be away on a school trip, but I'll be free every week except that one.
Click to expand...

On non-player roles: non-player roles are optional in an application and can include a variety of roles not related to playing, including Team Artist, Team Cheerleader, etc. CAPtains and their teams have no obligation to fill non-player role slots.

IF YOU ARE LIKELY TO BE GOING INACTIVE AND ARE UNMOTIVATED DO NOT SIGN UP, WHILE ABSENCES ARE UNPREVENTABLE WE WANT TO AVOID AS MANY OF THEM AS POSSIBLE. IF YOU ARE NOTORIOUSLY INACTIVE DURING TOURS AND DISPLAY THIS DURING THE TOURNAMENT YOU WILL BE BANNED FROM FUTURE CAPTTS.

UNSPORTSMANLIKE BEHAVIOR WILL NOT BE ACCEPTABLE AND WILL HAVE ACTION HAD AGAINST THEM ON ANY OFFENCES, WHETHER THIS BE A WARNING, INFRACTION, OR DISQUALIFICATION. There is a fine line between joking around for fun and being disrespectful.

Below is the tentative weekly schedule for the tournament:

Nice, I was wondering when this was going to start.

Oh boy, a time to get slaughtered

Name: Granny Pie on Smogon and on PS
Tiers Played/Interested In: ORAS, USUM, CAPLC
Non-player roles: I'm a good writer, dunno what that's worth, but hey. I'll right y'all a mean pep talk or hype you up to the crowd. Team Testing is always fun to do, as well.
Can be a Discount Snorly, if need be.
Any foreseeable inactivity: No.
Last edited: Jul 16, 2018

Name: Snorlax in the way
Tiers played: Bro I can swing all these tiers they call me PREPARED
Non-player roles: I make a mean apple pie
Any foreseeable inactivity: yo yall took so long to start might just be in college at the end of it, so might have to skedaddle unfortunately

Tiers Played/Interested In: NO
Non-player roles: NO
Any foreseeable inactivity: NO

Name: againa
Tiers played / interested in: gen 7 cap lc
non player roles: moral support
Any foreseeable inactivity: at the moment not really but ill be gone for a few days about when signups close

Moderator
Name: G-Luke
Tiers Played: USM CAP and CAP LC if a team is provided
Non player roles: Eat all your food
Any forseeable inactivity: Unless I magically get a job over the summer no

Name: on discord its legend slayer with a weird font but here ill likely be using my slurpuff priest ps, also my yaboilegendslayer or rainmeister alts depending on what im doing ladder wise 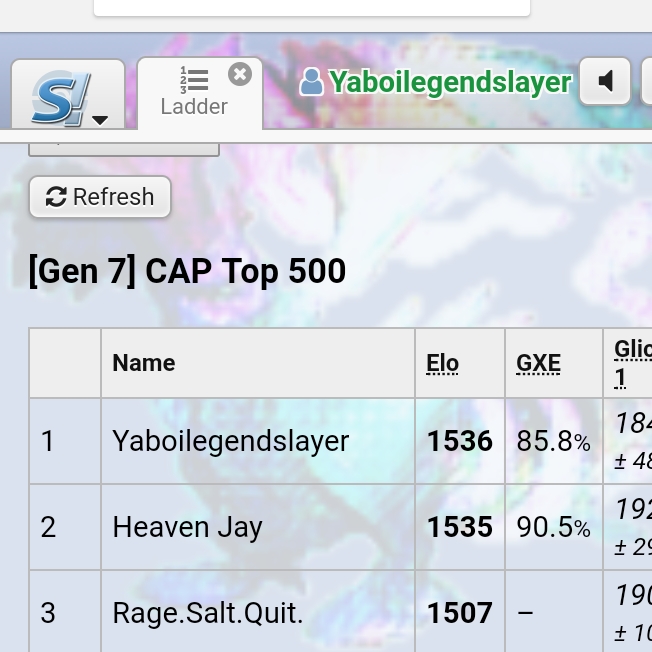 Tiers Played/Interested In: USUM
Non-player roles: Tester
Any foreseeable inactivity: I have graduation tonoght but that should be it

Name: Rage.Spam.Quit.
Tiers Played/Interested In: USUM
Non-player roles: builder and tester
Any foreseeable inactivity: maybe like all/most of the morning over the summer, but afternoons and evenings I’m free

Not super comfortable building CAP, but am more than willing to pilot if needed.

Name: Izuku M
Tiers Played/Interested In: USUM CAP
Non-player roles: Love to help people test their teams. Also I want to crack up jokes at least to help people cheer up and make sure they aren't stressed when battling.
Any foreseeable inactivity: I'll notify you when I become unavailable, but for now no.