DPP Ubers - The Arceus Experience (Round 1)

Welcome to the first round of the first DPP Ubers tournament that includes Farceus. This tournament, like other tournaments that compose this year's circuit, will award points towards a general Ubers leaderboard which will ultimately award the 2020 Ubers Ribbon (if you have any doubts over the ribbon system, check out this thread)! Little reminder that good performance in this tournament will likely be used as a means of getting Arceus's voting requirements,.

I know that was a lot to read, but it is all necessary for me to have posted here so everyone can see it in the case of a dispute. I don't want any confusion or any problems.
Pairings:

You are expected to know and follow all general tournament rules. Also check out this thread.
VMs are the only thing that matter for activity. Use this guide to ensure you don't lose via activity or coinflip.

Won 2-1. Choked G2 and haxed to win in G3. Sorry mate.
Could have blown up Gengar on Latios and killed Steelceus with HP Fire in G2 but I'm an idiot and wasn't paying attention. 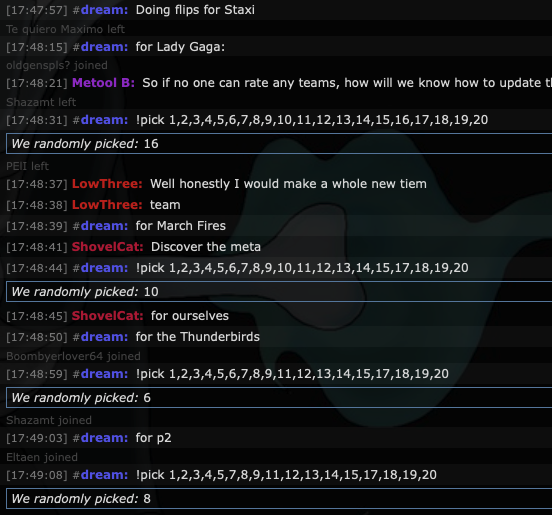 uhh in as sub

My opponent game me the win today

god decided on me winning 2-1 in one of the haxiest last games I've played lmao
https://replay.pokemonshowdown.com/gen4ubers-1062919110

i won 2-0thanks arceus

Opp give me the w

Maitre rock gave me the win on PM:

SiTuM VS The Thunderbirds
Looks like The thunderbirds missed the schedule.

mamawebos rodriguez VS dream
No answer from dream's opponent.

SOMALIA VS Roxiee
Somalia did not answer to Roxiee VM.

G-O-D BASTI VS Cynara
Basti did not answer to Cynara's last VM and looks like this game wasn't played.