if you post in this i will hurt you n.n

Arena: The Sinnoh Underground! Being underground, weather, aside from Sandstorm, is obviously not a factor and aquatic Pokemon will have trouble moving. However, you can dig through the floor, walls and ceilings. Items may fall out of the walls.

I'll lead of with the witchdoctor, Doctor the Duskull! 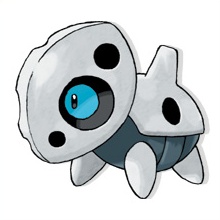 Aron[the rock of doom](M)
Nature: Brave
+1 atk -15% speed
Type:
Rock: Rock STAB; Take 2 less damage from all special attacks during Sandstorm, Earthquake and Magnitude have Energy Cost reduced by one (1).
Steel: Steel STAB; Immune to Sandstorm, highly insusceptible to toxic attacks, can be corroded specifically by Acid and Acid Bomb, can be magnetized.

Abilities:
Sturdy: (Innate) This Pokemon’s body is solidly constructed, reducing damage from an opponents attacks by one (1) damage. The effect is amplified on OHKO Moves, which are reduced by ten (10) damage.
Rock Head: (Innate) This Pokemon’s hard body prevents it from taking recoil damage from moves such as Double-Edge, Flare Blitz, and Head Smash.
Heavy Metal (DW): (Innate) The Pokemon's body structure is immensely dense, doubling its weight. When it uses a full-body attack or a weight-based attack it will do more damage, and it will be much harder to lift, throw, or knock back.

Aron is gonna dig unda yo ass and hit you with an iron head, making you flinch, then i'm gonna use head smash.
Dig-Iron Head-Head Smash

Underground, both the rock of doom, who is going to be referred as the rock from now on, and Doctor enjoy being in the spacious room provided to them. Starting things off quickly as the rock digs straight into the ground below him! Doctor really doesn't give a shit though as he floats just a little bit higher, out of reach of the 132 pound iron monster. Doctor then creates a tiny blue flame that starts spinning around the ghostly form, it seems as though he has created a flaming shield to scare off the rock! Unfortunately for both of them, the rock, brave by nature rises to the occasion and leaps into the shield protecting Doctor who is just sitting around controlling the counter shield. The rock's leap, leading with his iron head goes straight through the shield, burning him and hitting Doctor for solid damage. Hurting from the burn, but feeling ballsy, the rock stays on the offense and charges at Doctor, smashing him with his head, in the collision a rare bone becomes loose and falls onto the floor. Now at close range, Doctor files his latest prescription, a confuse ray that hits the rock directly.

Being the fact that Duskull's face is, well, a skull, Doctor should benefit somehow from the rare bone. So, go pick up that bone and hang onto it for a while if you can. Now, let's attack with Disable and follow that up with a Night Shade! To finish it off, try to scare the Aron with Astonish!

Don't let that noob scare you! You are a frickin brave ARON!

The next round starts off with a bang as the rock takes a creative approach to deal with Doctor's Levitate as he changes the route of his dig to go into the ceiling! Doctor really doesn't like that style at all and tries to avoid the dig by getting the Rare Bone on the ground, but fails as the rock hits him head on. Unhappy about that last action, Doctor attempts to disable the attack, but failed and negated Head Smash instead. Keeping momentum on his side, the rock follows up the dig with an iron head that landed for a critical hit. Doctor smiles evily, despite the crit, and uses night shade in order to give the rock hallucinations that end up hurting his very thoughts. In a fit of panic, the rock charges at Doctor yet again, hitting him with iron head, while Doctor keeps the situation under his control and continues to play mind games with the rock by attacking him with astonish.

Pro Aron gonna harden up his head and use iron head for bonus damage! Then gonna dodge duskull with dig into the left wall.
Harden-Iron Head-Dig

Man, I'm getting my ass kicked.

Okay Doctor, use Foresight to lock onto Aron's energy so you can see him while he Digs! When he Digs out of the wall to attack, hit him like you would with a baseball bat! While Aron is knocked down, freeze the walls with Blizzard so he can't Dig through them again!

Welcome to Dracoyoshi8 vs BlisseyOfDoom, now with creativity! The round starts off with the rock using the force of a newly hardened skull to increase the power of his already iron head. The force of the hit pushes Doctor back into the wall and loosens a Red Orb! Suddenly, Doctor's eyes become an even deeper red and lock onto the rock who begins to feel very, very vulnerable. Searching for some way to feel safe, some way to escape from the piercing eyes of Doctor, the rock comes up with an idea; Doctor can't possibly see him in the wall. Unfortunately for the rock, this idea fails miserably. As soon as he makes his exist none other than Doctor, with his eyes still an evilly piercing red , ready's his Rare Bone and lands a devastating hit. The hit and the energy lost from the first action's combination force the rock to lay stunned as Doctor fires a chilling Blizzard onto the walls of the tunnel.

Note: Everything in the tunnel was frozen for 3 rounds, moving around or getting through the ice will use more energy than it would regularly due to the already cold temperatures brought from simply being underground.

Now we're cooking! Alright, let's start off with a Pain Split, follow up with a Confuse Ray and finish it with a Shadow Sneak! We got this in the bag now!

Alright Aron we just need another Hardened Iron Head!
Follow it up with another Iron head!
Harden-Iron Head-Iron Head

The fourth round of this death-match between Doctor and the rock gets started much like it did in the third; the rock takes the time to combine the strength of hardening his head with the force of iron head to nail Doctor head on. Unfortunately, the concentration on the combination made the rock lose focus on landing and lies there stunned. Now with very low health, Doctor does what he does best, heal. Two glowing orbs come out of both Pokemon and the rock seems noticeably weaker than before! Taking advantage of the stunned Aron, Doctor lets out a sinister energy that confuses the rock. Taking even further advantage of the situation, Doctor vanishes into one of the many shadows in the tunnel and reappears after sneaking around in the shadows, hitting the rock. The rock looks around for the floating ghost, but is unable, the frustration gets to him and he starts hitting himself in confusion.

That is so BS...
Whatever, Harden and then Head Smash twice.
Harden-Head Smash-Head Smash

Man, confusion doesn't last long enough. If only I could...

Time some creativity bullshit! Drop the Rare Bone and pick up the Red Orb. Now, roll the Red Orb over to where Aron is standing and use Confuse Ray on it to create an "Orb of Confusion"! Finish the turn up by chilling.

http://www.youtube.com/watch?v=DpflEPzZoN8
YOU CANNOT DEFEAT IT

Attempting some sort of record, the rock hardens his body for the third round in a row! Soon after, chants waft into the participant's mind of dread and boredom. Doctor, however, begins the round with a bang by... playing catch with the rock? We're not sure what we plans, but the Red Orb loosened from a couple rounds ago is now directly in-between the rock and Doctor. The rock tries to care, he evens tries to stare at the orb, but even he cannot figure out what's going on, so he uses Head Smash as a means to bully the Duskull out of information. This works like a charm as Doctor regretfully uses Confuse Ray on it, creating the fabled Orb Of Confusion. What neither expect is a voice from the heaves saying "fuck this bullshit" and, as soon as the voice is gone, the Red Orb is found in pieces, leaving both Pokemon confused for two actions! The event leaves the rock especially confused who can't help but hit himself in confusion while Doctor questions the morality behind the move and chills out. This contemplation only brings another question to Doctor, "will the rock ever not hit itself to end a round while confused?"

Okay, that didn't work out as planned. Let's use Torment, Leer followed by another Leer and let's finish it up with a ShadowSneak! We got this!

Going back to similar tactics, the rock hardens its already tough skull and launches a powerful head smash at Doctor who's becomes quickly flabbergasted at the fact that so many Head Smashes have hit consecutively. Really, he was so confused by how this could possibly happen that he started hitting himself in confusion. After a single hit, however, Doctor regained composure and set off a cold, cruel leer, going without a single blink while the rock just sits around after having to deal with throwing yet another harsh combination of attacks. He regains his composure quickly, however and launches another head smash... or at least tries to as Doctor's question was answered. The rock finally slipped on the ice that he had so skillfully cracked all this time before due to his weight. Taking advantage of the slip, Doctor flew in and shadow sneaked the poor little monster.

One more Head Smash and Doctor's down. Time to play our trump card! Use Destiny Bond! If you somehow survive, use Leer, then ShadowSneak again!

The rock, wanting to end this as quickly as possible hardens his head again and follows up with another head smash that sends Doctor back to the grave

Time to enact our revenge! Go get em', Bandit! Bandit's ability will be Moxie.

Sandile(*) Bandit (M)
Nature: Quirky
Type: Ground / Dark
Ground: Ground STAB; Immune to all electrical attacks, Evasive Digging reduced from 3 per action Energy Cost to 2 per action, superior senses in darkened cave surroundings. Knock Down, Rock Slide, Sandstorm, and Stealth Rock have Energy Cost reduced by one (1).
Dark: Dark STAB; Immunity to all telepathic and telekinetic attacks, better performance in all darkened and especially twilight conditions. Can use more devious Dark-type attacks while attracted. Revenge and Vengeance have Energy Cost reduced by one (1).

Abilities:
Intimidate: (Can be Activated) When this Pokemon initially goes out into the battlefield, it generates an intimidating roar or war cry that shakes all opponents on the battlefield, reducing thier Attack stage by one (1). The attack drop is maintained at the end of each round. If an opponent switches in a new Pokemon, Intimidate can be activated again.
Moxie: (Innate) This Pokemon gets psyched after it earns a KO on an opposing Pokemon, increasing its attack by one (1) stage.
Anger Point (DW): (Innate) When struck with a critical hit, this Pokemon becomes enraged and its Attack rises to maximum (Stage 6). However, its Attack will drop up to two (2) stages at the end of each round instead of one (1) stage until it reaches stage zero (0).