Dad: Nerf
Ability now transforms the foe into this Pokemon without changing their movepool or ability.
Its ability is still amazing, but it can't totally neuter foes any more and switch in freely. Now it can only mostly neuter them.

Glakiss: Buff
New Ability: Mood Swing (Moody + Hustle): Hustle effects + Every turn either raises Attack by 2 and lowers Accuracy by 1 or vice versa.
Reason: Glakiss just sucks right now, even the mega does. It's still gimmicky, but hey, it's better than nothing.

Reason: As one of my own submissions, I realized that I went too overboard with the downsides of it's ability. With its current abilty, Sunflorrim's raw stats (with 252 SpA/4 SpD/252 Spe Modest) become 305/42/45/85/54/58, which is obviously very bad. My proposed buff would increase the nerfed stats to 305/85/90/171/109/116, which while still not ideal, make up for the boosts given by sun. Even then, this nerf would only come against opposing weather teams, so it is very situational.

Moderator
Not the end of the slate or anything, but the council has stepped in with some decissions

The following buffs were approved:

When the user switches in, it immediately transforms into the opponent, but with the moves being at double PP.


The council has also come up with the following changes:

2x Speed under either Sun or Electric Terrain, 4x if both are active

Heals 1/8 when Burned, Frozen or Poisoned, ignoring the effects of these status. Takes half damage from Poison, Ice and Fire.

Boosts Sp. Attack by 50% under Hail

At the end of each turn, gains one boost to its Crit ratio

Name changed to Gyarapedo, lowers foe's attack and boosts speed by one stage at the end of every turn

Combines effects of No Guard and Natural Cure

Immune to status moves. Status moves used by this fusion have +1 priority but do not affect Dark-types.

Please do note that the slate is not over yet. You can still submit your own buff suggestions
Last edited: May 8, 2019

Name changed to Gyarapedo, lowers foe's attack and boosts speed by one stage at the end of every turn
Click to expand... 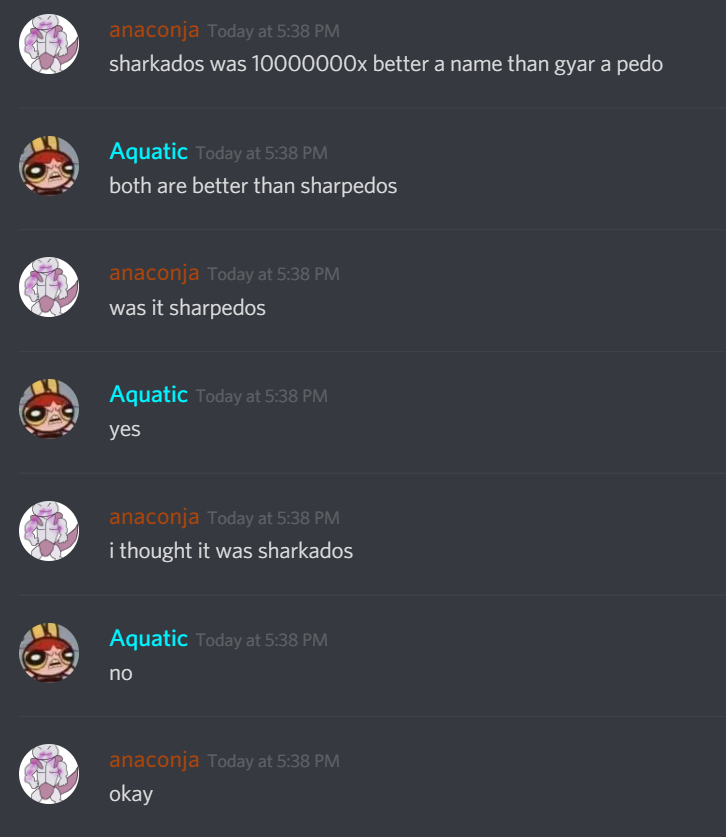 Change: remove negative effects
(idk where this comes from between the two abilities)

Changes: Rock/Dark
(make it so it can actually pursuit trap)

Changes: Distracted (Oblivious + Unaware): This Pokemon ignores other Pokemon's stat stages when taking or doing damage. If hit by a boosted attack, taunts and attracts the attacker regardless of gender.
(hard to justify originally over another fat water-type)

Changes: Star Burst (Natural Cure + Super Luck): This Pokemon's attacks crit if the target has a status condition.
(gives it the merciless-esque niche)

Changes: Grass/Poison
(look half its body is a flower)

Changes: Ground/Normal
(without tarrows stab, its a wonder what it does)

Changes: Mirage (Big Pecks + Overgrow) - When hit by a Grass-type attack, this Pokemon's Defense is raised 2 stages
(no more contact immunity, but does gain a pseudo-resistance)

It really isn't. Tapu Loom doesn't need to hold Toxic Orb. It can get 25% recovery per turn with Lefties + Grassy Heal + Grassy Terrain, or run a more bulky offense set that keeps the heal and hits harder. The difference is that, besides Poison immunity, it can be statused with the other conditions and it needs to switch out every 5 turns because Grassy Terrain runs out. The current ability is higher risk higher reward with more versatility, not a downgrade.

Lampara-De-Noche: Nerf
Dark Light is now made from Volt Absorb and Prism Armor and simply combines component effects.
Reason: If mons with abilities that grant immunity to moves with secondary effects or moves that make contact are deemed uncompetitive and banned, then I fail to see how unignorable immunity that heals a quarter of the user's health to all super-effective moves on a decently bulky mon with 5 of them along with a good amount of resistances is any different. I get FE is starved of defensive presence as is, but a mon that invalidates ~50% of the type chart is not the way to go.

AquaticPanic said:
View attachment 174412Immune to status moves. Status moves used by this fusion have +1 priority but do not affect Dark-types.
Click to expand...

Out of curiosity, what's the new ability called? The old one was called "Late Bloomer", but I don't think that fits the new one.

Blumenwitz said:
Out of curiosity, what's the new ability called? The old one was called "Late Bloomer", but I don't think that fits the new one.
Click to expand...

We didn't really think of that. I suppose we're open for suggestions