lost in 5, ggs and gl in future rounds

s/o b2 for being my go-to help when it came to finishing teams lax Bouff Chill Shadow Bushtush.
s/o TDK for looking over my uu team and Luthier and Xiri for the lc and pu teams respectively

I also want to thank the lab, brotherhood and cobras for the constant support. You guys mean the world to me and I wouldn't had made it this far w/o you all

Won vs arce9 ggs. keep going my dude you did great!

Lost in 5 against Roseybear, ggs. Good luck in the future rounds bro.

Very happy that I got this far on my first slam run. Only regret I have is the RU game.
Shoutouts to RaJ.Shoot, kythr, Acselsior13, Plas and Mikaav for help with lc, Skipkan for pu and nu, Mac3 for team ideas in RU and 100%GXE for the UU team and all of you for cheering me on. Had a great time prepping and playing.

Hopefully I'll be back next year

Deadline: 20/09/2020 at 23:59 GMT -4
The schedule sheet can be found here​
ps: for those unaware, I've underwent myopia surgery this past Thursday. My vision is very blurry atm and it's bound to be like this at least through Friday, so bear with me if the OP is looking ugly or outdated. GL to the remaining 8!

kjedit: Replays have been added. Just waiting on the art atm.
Last edited by a moderator: Sep 15, 2020 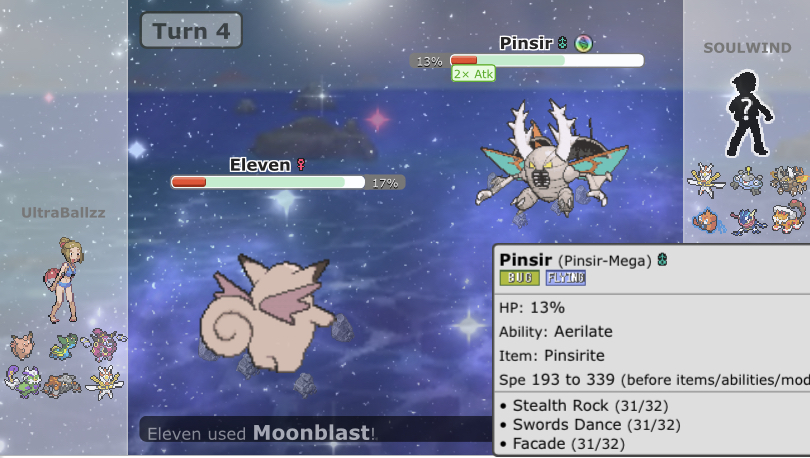 Hey soulwind, gentleman’s agreement for you to bring sets like this again??

BW Circuit Champion
16. Santu vs 8. Dominatio - Closer than it may seem because Dominato has been putting in work recently, but Santu is great. He shows that he can adapt from one tier to another. I think Santu is the favorite overall alongside SoulWind and I believe he will take this in 3-4 so long as he puts in the work in prepping for the few tiers he is less familiar with.

2. Roseybear vs 7. PinkDragonTamer - Hardest series to predict. I view both as good, but not super proven. Roseybear has beaten a lot of great players over different tournaments, but PDT is on fire and perhaps the trendy pick. I think that PDT beating Lopunny Kicks was one of the most impressive things to me recently and that is enough for me to side with him. This one is close to 50/50 though and I think whoever manages to take LC could end up favored overall.

4. UltraBallz vs 5. SoulWind - SoulWind is the favorite here. Be it through connections or his own hard work, he seems to bring solid teams. In terms of gameplay, he is the best in the field and may be able to bring home his second individual because of that. Excited to see what UltraBallz comes up with to try to get SoulWind's way, but I think he is in over his head if SoulWind puts his best foot forward. Santu-SoulWind will be a treat next round.

3. Confide vs 6. Moutemoute - Confide is a really strong player. I think he has a tendency to bring "ratchet" teams that may have holes, but he plays very aggressively and I think we are past the point of underrating him now that he is in the final 8. Moutemoute is the more conventional player and it seems like his foundation in tiers like UU and NU are great. I feel like his series vs Snaga could have went either way, but he was able to pull through and that is impressive. I favor Confide here, but this one should go 4-5 games and may come down to team choices.

Keep Calm And Don't Fuck Up Everything

Moderator
Lost in 3 agains't Confide, ngl pretty disappointed with my performance, I could play those games way better. Good luck to you Confide in future rounds. Also massive shoutout to my french guys who supported me from the beginning and helped me by building / providing teams in tiers where I don't build. So yeah thanks to you guys and sorry for having play that poorly today : Pepeduce, zS, basaninho, HaxxSel, Hurtadoo, Xizaaa and all those I forget who encouraged me, I'm hoping I'll be able to come back next year, better than ever. Good luck to all the remaining players !
Last edited: Sep 20, 2020

lost in 4, ggs. could've played a couple key turns better but Santu you played well and won a clean series. thanks to everyone who supported me and special thanks to TSR Enzo Gorlami Forsendi Alpha Rabbit Juno and LilyAC for providing the teams I used to play and learn the tiers. good luck to everyone remaining and I hope to watch some fire semis matches

won vs dominatio in 4, ggs

For me, I hadn't been playing much mons since like snake last year and I was planning on coming back to play one more world cup and then hang it up for good. Decided to give slam a go because I have always had fun with it and I am so happy I did. I had no expectations of making it this far since I didn't put near the effort into lower tiers as I had in the past, but some good fortune and clicking random buttons can get you pretty far I guess.

This site has a bunch of good new players, and outside of the handful of idiots, is a great community and I'm happy to have found it. Thanks to OG Den of Thieves, team midwest, and all my friends who really got me into the game and helped make the last few years very enjoyable. You all were great and I look forward to just arm chairing games from now on. Good luck to the top 4 :]

Personally rooting for Soulwind to get his 2nd ring, but wouldn’t be opposed to santu getting his 1st either. Winner of that pairing takes it home imo