Make your own personalized Trainer Card! Whether it's by travelling through regions with a packed team, watching the anime, playing side games, collecting cards, reading books, or playing competitive, each of us have had Pokémon in our lives. Most of us who've experienced the media franchise have found Pokémon to connect to more than any other. Those Pokémon became stored in some of our most precious memories. If you've clicked on this thread, I'm sure you have a team of Pokémon you find personal value in the most; whether because they are your favorites or just because they mean the most to your experience interacting with the media franchise. I encourage you to make your own personal Trainer Card with the six Pokémon you would have in your main team if Pokémon were real and just as friendly to the world as they are in theirs.​
Rules:
1) The Pokémon you should have in your Trainer Card are those who mean the most to you and your experiences. They are the ones you cherish the most for whatever reason.
2) Any Pokémon can go on your Trainer Card. This includes Legendary Pokémon, Mythical Pokémon, Ultra Beasts, and Smogon's CAP.
3) If you add a CAP, you can either post an image of the Pokémon next to your Trainer Card (while having the respective empty slots on your card) or you can edit your card with https://pixlr.com/x/ and add in your desired Pokémon.
4) Any amount of Pokémon can be in your card, as long as it's not above six. You can also have as many of the same Pokémon as you want up to six.
5) Follow National Dex mechanics (No more than one Mega Evolution or Gigantamax Pokémon. Indicate if you want to alternate between Pokémon).
6) You don't have to explain why your Pokémon are on your Trainer Card, but you can if you wish.

I think you're compensating for something 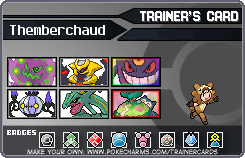 I'd normally put Suicune, but I never usually use Legendary / Mythical Pokémon on playthroughs so here's my top 2-7 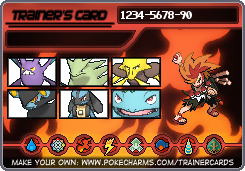 please add me into this game. im begging you. my son he is very sick 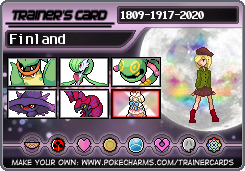 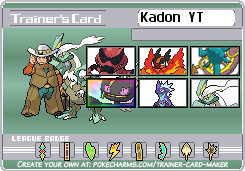 Here are the Pokemon I chose

I love how it turned out

wow very epic cards every1 btw i am starting a clan called the black charizards so if you want to join let me know but you need to beat me first and must use a black charizard on your team rules: single lv 100 no ubers legends hacks name:BRANDON fc:3050 5081 4330

My first mainline game was Emerald, so the first team I made for ORAS was a collection of pokemon I had milestones with as a pokemon player. This is that team. Unsurprisingly, after looking at what my history was, I went into monotype in a big way.

Aggron: what I consider to be the first mon I chose for myself. I actually had PMD Blue before Emerald, and due to having charmander as the player character on my first file, aron was available from the first point at which obtaining random wilds was possible. I never got all that attached to other early mons (magnemite possibly excepted) or even the starter and partner themselves, but I remember Aron.

Skarmory: Half of the pair that got me to first think of an actual strategy, along with Rhyperior. Earthquake+Flying isn't that much, but this was coming off someone who brute-forced the Diamond e4 with just infernape.

Heatran: My first, and still one of very few mons I've had an in-person trade for that wasn't just for evolution

Excadrill: The main one of the first set of mons I raised for the purpose of being on a team, instead of just using whatever I had lying around postgame.

Ferrothorn: The mon that clued me in that not running a 4 attacks set is occasionally a good idea

Aegislash: First mon I put thought into their EVs, and, though it might be a bit embarrasing to admit for someone who started with Emerald, it was the star of team for my first pvp win against someone other than my sister. 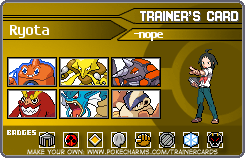 no eventful story about why I like any of those. I generally like strong Pokemon and those are ones that I consistently enjoy using in any game, if I can
use them. Rotom is also my favorite Pokemon as a whole.

Selected Johto badges, as HGSS is one of my favorite games and I think the badges look cool. 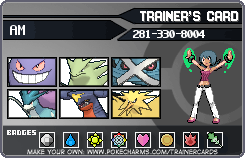 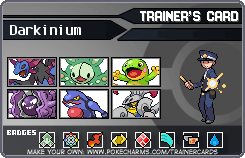 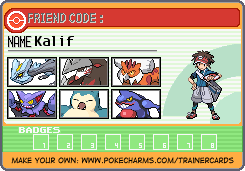 Kyurem because Kyurem is probably my favorite mon ever lmao.
Excadrill because if Kyurem isn't my favorite, Excadrill is.
Lando-T because I love building in SM OU, and Lando-T is good like nothing else is in that tier, so much versatility.
Gliscor because it's my favorite mon to use in competitive, specifically Swords Dance sets, in ORAS, and SM OU.
Snorlax because it represents how much I eat. (i'm not actually fat lmao)
Toxicroak because 9 times out of 10, I be having that Dry Skin.

I should lotion more ngl

Finland said:
you clearly must be if you got two megas through the validator
Click to expand...

Three, I think chomp is mega too, and possibly ttar as well lmao

This could of been I am the Impostor ’s rom 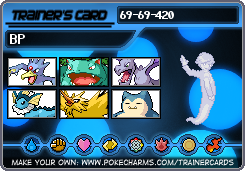 Golduck is my favorite pokemon. I chose the ghost because there was no professor oak sprite. can you tell im a FRLG fan?

As above, so below 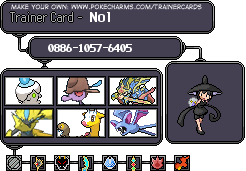 The Lampent cosplay girl was too adorable to pass up!
Litwick - My favorite.
Skrelp - My favorite small, underappreciated kelp dragon boi, and second favorite overall.
Zacian - My favorite legendary.
Zeraora - This Pokémon is directly responsible for me getting voice in the Wi-Fi room and everything that has followed since then.
Girafarig - It's a giraffe, what's not to love.
Zubat - My first ever shiny Pokémon. 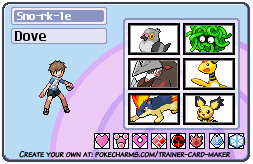 Pokemon:
1) Pidove is my favourite Pokémon Obviously
2) Tangela was the first ever shiny I got which I received in ORAS at just around 12 am on 29th of December 2 years ago.
3) Excadrill was the first Pokémon that I recall getting into competitive and understanding it with. This was on my second play through of Pokémon White 2 and my overall favourite play through of any game I've done, giving him a rightful spot on my card.
4) Ampharos has been on many of my teams having had one HGSS play through and 2 crystal play throughs meaning its been on my team 3 times. I've always loved it as a Pokemon and found it to be one of my favourites being the reasons I chose it.
5) Quilava is my favourite starter Pokemon of all the possible evolutions, Megas, and other starter Pokemon's lines etc. Additionally to Ampharos its always been the starter I've selected in gen 2 play throughs which is why its ended up on my list.
6) Pichu is my main in smash bros and well pretty much all I use and what I love to use.

Finland said:
you clearly must be if you got two megas through the validator
Click to expand... 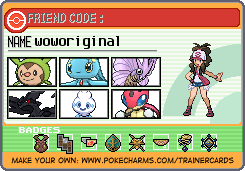