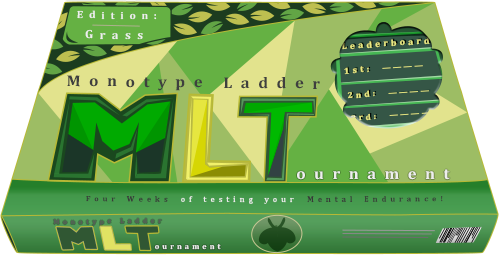 This tournament will consist of two stages:

1. The first is the actual laddering portion of the tournament, which will last an entire month. The eight participants with the highest ELO at the end of each week will be entered into the playoffs. If a player "won" for multiple weeks, the next highest rated person will be admitted into the playoffs.
Tiebreak Ruling: If two players were to have the same ELO for 8th and 9th place, the player that progresses will be the user with the highest GXE for example:
#8: MLT5B1 Havens - 1949 - 85%
#9: MLT5B1 Decem - 1949 - 84%
Tiebreak rules will declare MLT5B1 Havens as the 8th place user of the cycle.

If two players are tied in both ELO and GXE, then a best of three of SM Monotype will serve as the tiebreaker.

2. At the end of the laddering stage (stage one), the playoffs will start with the 32 top ladder players of the month. Pairings will be randomized. More information on format and rules are listed below. Since there is a possibility we will need substitutes for the tournament, we'll take the 9th and 10th people in each period and randomize them as subs if needed. If you qualify as #9 or #10, you are still able to participate in other cycles and try to qualify for the top 8 of a given cycle.
Cycle 4 Tag: MLTG6H

Example nick: MLTG6H Havens
Your rank on the ladder "resets" at the end of each cycle. You must ladder with a new alt each cycle and post it on this thread before you start laddering.
Cycle 4 ends at Sunday September 8th at 1 PM EST