More uploads for today (sorry for clogging thread) got the first-ever PLAYER interview for MPL, and covered Trich vs Arifeen. I hope you guys enjoy :)

Another upload, this time covering the lycan vs azelea bo3. Listen to me gamer rage over the result of game 1! I hope you all enjoy :) 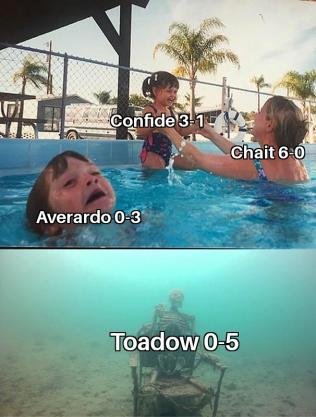 I already regret agreeing to do this based on how close the standing are but here we go.

So to start off I want to explain to everyone how the record actually work and what the numbers on the spreadsheet actually represent and mean. I thought most people knew this but actually a lot of players were asking questions about it the other day so lets just give a quick recap.


So if you take a look at the spreadsheet you will see a column that reads Record (Points). We are going to use the Gengars for our example. Their record reads 4-1-1 (9) | 4 ... So what does that mean? The first 3 numbers stand for wins - losses - ties. So in the Gengars case, it's 4 wins - 1 loss - 1 tie. That part is pretty easy to understand.

Now the number in the () is how many points they have. This is the importiant number because these points are how the standings are measured. The higher number you have in the () the better your team is doing. So the Gengars are in first with (9) but how do we calculate this number? Its actually pretty simple, its calculated using the team record, so the 4-1-1 in this case. Each win counts for 2 points, ties count for 1 point, losses are 0. So for the Gengars they have 4 wins so 4 wins at 2 points each is 4x2=8. Now ties count as one point and they have 1 tie so 1x1=1. 8+1 =9 and that is how the points are calculated.

The last number is the match differential. Basically if you win a week 5 matches to 3, so you win 5 and your opponent wins 3. That would give you a +2 boost to your differential and a -2 to your opponent. So if you are winning weeks your differential is going up and if you are losing its going down. If you tie both teams get +0. The reason that this matters is because if two teams end up with the same amount of points at the end of all the weeks, the differential is used to break the tie.
Okay so with that out of the way lets get into the teams.

| Scenario 1 | Miniors lose and end up with a lower match differential than the Treekos (Minors are currently at +8, Treekos are at +2)

So if all of the scenarios happen the Treekos will end up 2nd. If 2 of them happen they will end up 3rd and if just one happens they will end up 4th (of course only if they win).
The Milotics and Bucks are currently tied for 5th with 6 points and a match differential of - 4. I will be doing them together since they are playing each other so their path to playoffs is the same. So since 7 is the magic number they need to at least tie to make it in but unfortunately neither of these teams decided their own fate, even a win will not guarantee them a playoff spot. Best they can place is 2nd and worse they can place is 7th. So -

So if just one scenario happens the winner of Bucks/Milotics will be 4th seed. If 2 of them happen Bucks/Milos are 3rd seed and if all 3 happen they will be 2nd seed.
The Houndooms are currently in 4th with 6 points and a differential of +2. This is the first team we have that actually controls their own destiny. If they can win their game 6-2 or better they are in. Best they can finish is 2nd and the worst they can finish is 7th.

If one of those happens they will be 4th seed, if 2 happen they are 3rd and if all 3 happen they would be 2nd.

Win this week - Make playoffs IF

Same as normal, if they all happen 2nd. 2 happen 3rd seed, 1 happens 4th seed.
The Krows are currently in 3rd with 6 points and a match differential of +4. They have it easy, if they win they are in. But if they dont win it gets more complicated. 2nd is highest for them, 7th is worst.

Win this week - Make the playoffs no matter what. Depending on Minior and Doom results they will get 2nd-4th seed. I am tired of typing so I wont write those out.
Miniors are in 2nd with 7 points and a differential of +8. They have a really easy path and a win OR a tie puts them in playoffs. They can even make it with a loss. Best they can do is 1st, worst is 5th.

Lose this week - Make playoffs IF TWO OF THE FOLLOWING HAPPEN

It is so sad to see that our season has come to a close, we definitely had the tools to win this tournament. Our semifinals was ugly with hax and match up, but that's Pokémon for you. I give my thanks to the people mentioned below.


Zar I give you a hard time a lot (mostly as jokes), but I'm glad you drafted me. I was surprised to see that you were super active in the discord and supporting the Bucks throughout the tournament. You definitely played an important role in our success throughout the tournament. I have a lot of laughs with you which is something I value a lot. Glad to have you as a fren.

Sentimental shit aside, this guy really calling me aids in his post? Just take a look at these... Zarat

How I beat Gondra? I beat him confidently ;w;

Havens You were definitely the SS workhorse for us, a lot of big, key wins from you which helped us make playoffs. You're a great guy, love playing mafia with you.

kythr Glad I was able to team with you man. You were a great teammate who played super well which was instrumental towards our success. Hopefully we keep in touch after MPL.

Its Choco Bitch I've known you for awhile, great friend and great player, was a pleasure teaming with you as always.

Catalystic I teamed with you in mwcop for central, you always have unique teams that I don't understand sometimes in SM but they tend to work out. Was happy I was able to team with you again.

SirSkit I know you didn't get to shine your light in this tournament, but in my eyes you are one of the best ORAS around. Thanks for being on the squad.

Azelea Never seen you play mons before this tour, nice win vs 1 true snake. You're another guy that I always have a good time with when you come on. Work on that English for me!

Jyph I don't even know where to start with Jyph, one of my favorite guys on this site. Was glad we ran into each other on central and got along super well there. You're a super nice guy and super funny. Couldn't ask for a better teammate and fren.

Sae Same as above, you're a really nice guy who is enjoyable to be around. You're super motivated to help your teammates succeed and put your best for our team. Play mafia with us more often!

tko Super glad we got you a game this tour (bring my ice team next time). We didn't get to see a lot of you on the battle scene, but your presence in the discord was positive energy our team needed. If anyone ever needs a motivational speech, tko is the guy.

lax was sad to see you left our team's discord. We definitely could have used your knowledge in other tiers, but I'm familiar with the concept of being unmotivated so I understand. Thanks for playing with us.

Thimo where'd you go?
I would also like to give my thanks to other people on this site who I consider to be frens, help me go through the ranks in mono, and people who shaped me as a person on this site. I will categorize you guys by how I see fit.


Chaitanya I think there was like 3 months straight where we would talk everyday lol. Nothing but the most respect for you as a person (other than you're a Giants fan but look how that's turning out for you right now LOOOOOOOOOOOOOOOOOOOOOL). The more I talked with you, the more I saw that we have a lot alike and we share similar personalities. I'm glad we crossed paths, keep doing you.

Prosaic Super glad I can call you a fren, you are easy to talk to and my main rand bats/sm games guy. You're the second smartest guy I know on this site (we both know who the first is). I love our talks and your presence on this site. I could keep talking but I have like 20-30 more people so I'm gonna keep it short, like your height LOL!

Feitan the steam iKioi Aparctias I know you guys might not see this for a bit, but you guys know I appreciate you guys a lot. Positive guys to be around and great friends.

Vodoom I know everyone thinks you're aids (you are), but you're a funny, smart, and rich guy. Always a fun time being around you.

Kev While we may not see eye to eye on a lot of things, you are definitely someone I give my gratitude to. You are not afraid to call me out when I say something dumb which I appreciate. What's important is we have moments where we do get along and is not always toxic.

Zap Never seen someone go from Pokemon main to brawl stars main. I know you don't come on a lot anymore but we gotta talk more!

Attribute Thanks for always being a fren on this site, love our laughs and talks on anything. Also get gud at brawlstars.

Ridley It's always fun talking with you, glad I have you as a fren

Conflux Ice tray the gang, you're always fun to talk to and crack jokes with. Appreciate you big fella.

Thorn I love our chess and poker games, glad we have been talking more as of recent.

Wyn From hangman, to rand bats, to talking about whatever the hell is on our minds, its always enjoyable to see you around.

1 True Lycan Nailec zugubu royale Llama love you guys, I don't talk to you guys a lot but when we do it's always a pleasure.
There are too many people here to do individually so I'm just going to tag you all so you don't complain. I want to thank all of you for making my time on this site enjoyable. It has been so much fun to grow and mature with these guys. I wouldn't be taking the time out of my day to do this if I didn't mean it.

I am entering a phase of my life where my focus will have to be away from video games. I have accumulated too many hours on this site for my liking so I plan to slowly drift away. While it is possible that I could play this game in the future, this is my last major tournament I foresee myself playing in so I felt the need to give my thanks and my goodbyes to monotype. I am thankful that I am a part of such a wonderful community with such great people. My discord @Brisked#2399 is always available if you want to talk or catch up. Thank you all once again.