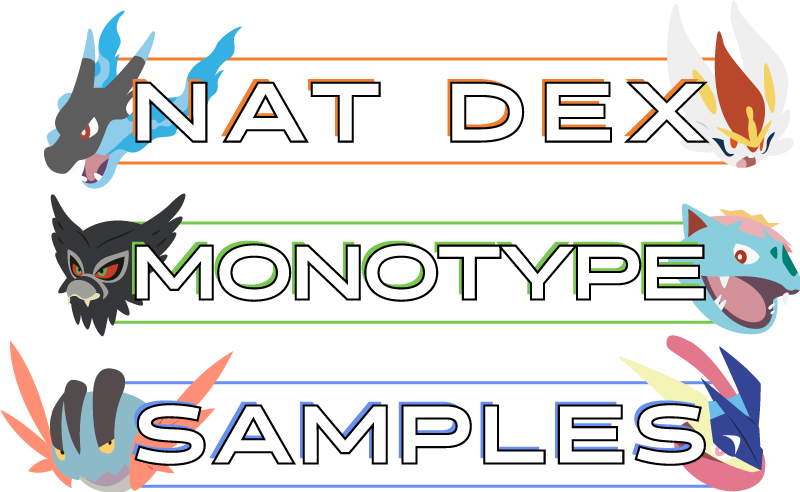 The purpose of this resource will be to provide teams that are easy to use and represent the type fairly well for newer players to learn the metagame with. These teams can also be used as a base in order to try out new options in teambuilding. As such, sample teams will be held up to a high standard.

If you're thinking of contributing, great! Please take a moment to read the following.

We will exercise very high standards over which teams are approved. We will not feature teams using sub-optimal archetypes, such as Stall Fairy. While niche tech sets and non-conventional builds (like those seen in RMTs) are not forbidden, submitted teams must be broadly effective and viable in the meta.

The teams showcased in this thread should be representative of the various, viable, relevant play-styles and archetypes present in the Monotype metagame.

Here are the guidelines for submissions:

1. Make sure submissions are in the [Gen 8 National Dex Monotype] format.
2. Provide an importable for your team. Don't use nicknames for your Pokemon.
3. Accompanying sprites and art are appreciated, but not mandatory. All of the sprites can be found here.
4. Replays are highly encouraged and are a great way to demonstrate that the team is effective in the metagame. Make sure your teams are tested.
5. This is not the RMT forum; this thread is not the place to seek feedback on undeveloped teams and concepts.
6. Don't Post Memes. They will be deleted.
7. Finally, if you edit your submission based on feedback (or any reason), please make a note of it at the bottom of the post so I know to re-evaluate. You can also PM me here, on Discord as maroon#1999 or on Pokemon Showdown!.

Here is a sample submission, courtesy of Decem:

This is a pretty standard Ghost team that I think works well. Swords Dance Aegislash is a setup sweeper that can punch holes in opposing teams with its two STAB moves and coverage in Close Combat, while it becomes powerful if boosted by Weakness Policy. Gengar is the team's speed control, and can revenge kill faster Pokemon such as Dragapult, Choice Scarf Excadrill, Choice Scarf Gardevoir, and setup sweepers like Kommo-o after a boost. Mimikyu is another Swords Dance sweeper alongside Aegislash that can blanket check various threats in the metagame with Disguise. Since this team was a bit Ground weak, I decided to add Wood Hammer in order to soften up the matchup. Choice Specs Dragapult is one of the best offensive Pokemon available to Ghost teams, and can take advantage of its speed along with its coverage to put major with in many matchups such as Steel, Water, Flying, Dragon, Grass, and Ground. Infiltrator is preferred to handle Substitute users such as Hydreigon and Whimsicott but Clear Body can be used too for Sticky Web. Sableye is a stallbreaker that has priority Will-O-Wisp, and is good for blocking hazard setters too. I chose Sableye as a Taunt user for this team, seeing as its very good against Ground and the Knock Off utility is great, but Jellicent can work over it too. Galarian Corsola is the Stealth Rock setter. I picked it over Runerigus, seeing as it can comfortably set Stealth Rock up against Water for Dragapult to break, making the hazard crucial.

Note: Since there are a ton of viable sample teams already, please make sure you only submit teams that are not similar to existing samples. You may use this thread to suggest improvements to existing samples!
Last edited by a moderator: Jan 6, 2022

(click on the sprites to get each team's importable!)​

Mandibuzz @ Heavy-Duty Boots
Ability: Overcoat
EVs: 248 HP / 244 Def / 16 Spe
Impish Nature
- Foul Play
- Roost
- Defog
- U-turn
I left on the defensive core of the team, mandibuzz and Tyranitar-mega. Mandibuzz is the physical defensive wall of the team, especially to check the fight types, remove entry hazards and threaten potential physical sweeper with foul play, like dragonite. Tyranitar-mega is the special defensive wall thanks to sand stream, lay traps of stealth rock and can trap some threats thanks to pursuit. Hydrei specs is an excellent wallbreaker that can threaten most teams thanks to its boosted attacks, the team having two u-turn abusers, so it's very easy for him to get on the terrain. I later opted for the recommended greninja set on smogon, namely toxic-spikes and grassium z. This set has the advantage of threatening water and grass, while pressurizing the team in front thanks to the row of t-spikes. To reinforce the offensive core, bisharp seemed ideal to me, dissuading defog users. It can also deal with slow fairys, and has an interesting priority. In the end, Urshifu seemed to me to be the best possible scarf. With his excellent speed, his talent in preventing the protect and his signature attack. With a u-turn access for momentum and poison jab for the fairys.
https://replay.pokemonshowdown.com/...-1276258249-hlouxi1zmm8dswnwfh6w4cqptzxcgzrpw (vs Fight)

Latios (M) @ Dragonium Z/Choice Specs
Ability: Levitate
EVs: 4 Def / 252 SpA / 252 Spe
Timid Nature
IVs: 0 Atk
- Draco Meteor
- Psychic
- Mystical Fire
- Defog
Mega Gallade is an all around fantastic wallbreaker, being able to OHKO or 2HKO most of the common walls in the metagame after a SD. It is also an answer to threatening dark types such as Bisharp, Hydreigon, and non-scarfed Urshifu-S, and what the team is built around. Latios is a potent special wallbreaker that can take care of walls that Gallade struggles with such as Foul Play Mandibuzz and Dragonite, can OHKO some variants of Mega Scizor (specs OHKOs every variant of it), chip other steel and bug types with mystical fire, and defog hazards that wear the team down. Slowbro is the team's physical wall, being able to threaten pokemon out with future sight, and safely switch with teleport, making the jobs of the team's wallbreakers a lot easier. Jirachi's job is to sponge the moonblasts and ice beams that threaten Gallade and Latios, while also setting rocks, spreading t-waves, and pivoting out. Victini is a tremendous offensive pivot, and is another answer to steel, bug, and flying threats such as Celesteela, Volcarona, Mantine, and Melmetal. Tapu Lele serves as the team's primary speed control who is another threat to dark and dragon types, outspeeding non-scarfed Greninja, Weavile, Garchomp, Zarude, Hydreigon, and opposing Lati@s, in addition to dealing with Mega Sableye and priority.

Big thanks to Mateeus for assisting me with the editing of this team and this description.

Edit: also why is that poor Charizard-Mega-Y modest on the ho flying team
Last edited: Jun 18, 2021

I also noticed the water sample is outdated and their isn't an balanced water sample so I am submitting these.

Choice Scarf Tapu Fini acts as a good revenge killer with its STAB moves, Trick cripples walls while Defog remove entry hazards. Toxapex, Swampert and Slowking make this team defensive core, covering Water's weakness. Substitute + Bulk Up Urshifu-R is the team setup sweeper, being able to set Substitute up on forced switches and using Bulk Up to wallbreak. Grassium Z Greninja has the coverage to deal with Flying-, Ground- and Water-types, improving the matchups against these types, Z-Grass Knot can be use to defeat walls like Rotom-W.
Manaphy Rain Water

Choice Specs Pelipper and Swampert-Mega make the rain core on this team, hitting very hard with their STAB attacks and providing team support with Defog and Stealth Rock. Wacan Berry Toxapex can tank a Electric-type attack if needed and Sludge Bomb deals with Fairy-types like Tapu Bulu. Substitute + Bulk Up Urshifu-R hits very hard and can set Substitute up to wallbreak safely. Waterium Z Manaphy helps the team with Rain Dance support, it can setup with Tail Glow to hit very hard and sweep with Z-Rain Dance to boost its Speed or break walls with Z-Surf.

Tapu Koko @ Choice Specs / Expert belt
Ability: Electric Surge
EVs: 4 Atk / 252 SpA / 252 Spe
Naive Nature
IVs: 30 Atk
- Volt Switch
- Hidden Power [Ice]
- Brave Bird / Thunderbolt
- Dazzling Gleam
Belly Drum Azumarill is such an amazing mon and plows through a lot of types (namely flying with no mantine, steel with a weakened ferrothorn, electric with a weakened rotom wash), aside from the types weak to water. Due to Normalium boosted Belly Drum healing you to full before cutting your HP, you can quite setup in front of anything that doesnt overly oneshot you but would leave you unable to belly drum (eg. Thundurus if you are behind screens). Waterfall is there to kill Melm and Mega Steelix which is actually very scary to go against. Lele is scarfed as an emergency sweeper and helps in a lot of mus and Cinderace. It also gives you the option of killing Steel's scarfed excadrill offensively if you trust focus blast. You can opt for shadow ball over thunderbolt if you want to hit Aegislash, but I havent really had that situation yet. Substitute Bulu helps in the ground, normal and electric (most volt switches wont break a sub behind screens) mus. Mega Diancie has Ground-Fire coverage for steel and is the better mega for Fairy. Choice specs Koko is needed to get a strong volt switcher, a bolt-beam-er and a decent dazzling gleam. Brave bird is there to ease the Grass and Poison MU (M.Ven gets 3KO'ed), though you can run expert belt to get better results. Take note though that Expert belt Tapu koko misses out on a lot of KO'es including Kyurem and Garchomp. Klefki is there because screens are needed to help Azumarill and Tapu Bulu set up. it also acts as the poison immunity of the team to help you avoid a possible sweep from Lando I, Nihilego, etc. Big thanks to Ashbala99 and Petele for helping with the team.
https://replay.pokemonshowdown.com/...-1371002376-g79fbzuyvhqnefh6ala6fpv1eo74ncdpw vs. steel

We have updated samples!

Since doing them is kind of a grueling work, I currently made a team of each type. Feel free to continue submitting your teams you may seem fit; we plan on expanding to more samples per type in the near future!
Last edited: Sep 4, 2021

i made this mega aerodactyl rock team, it had good results i got ladder 1 in the tier. https://pokepast.es/b10ed72321ec7d5b Tapu Fini @ Choice Specs
Ability: Misty Surge
EVs: 252 SpA / 4 SpD / 252 Spe
Timid Nature
IVs: 0 Atk
- Trick
- Scald
- Hydro Pump
- Moonblast
first I needed to find a drizzle mon there are 2 options toad or peliper I pickedtoad it can do cool things like land a hypnosus z and belydrum and take out most of their team and send smth like swampert to clean.swampert is mainly used to clean up after toad puts in some work also can setup on walls like pex to sweep.Toxepex is used to beat grass types
it can toxic spikes and spam recover lol and I like the regen core.greninja just comes in click z hydro canon and try to do much work as possible.slowbro is also part of the regen core calm mind stalls and burn anoys physical mons w scald.tapu fini cover dark types that beat slowbro and trick for stallers like oponent slowbros,pex and maybe ferro but 99% they click gyro/power whip
Last edited: Apr 8, 2022