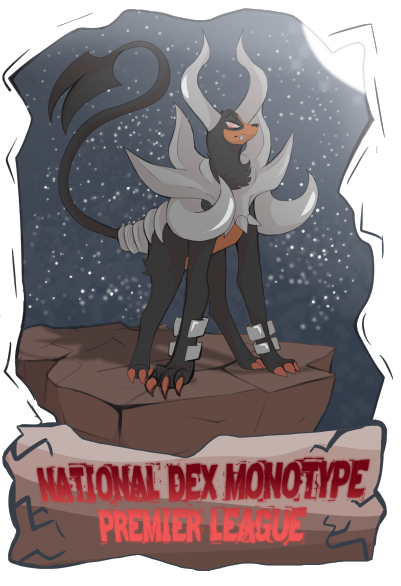 Banner by ausma | Hosted by Nol & pannuracotta ​
Welcome to National Dex Monotype Premier League II. The tour will span the summer, so make sure you will be available for a majority of the duration before signing up. A player's duty involves more than bringing wins to the team; a player should be a positive chat presence, help with teambuilding and testing when able and cheer on their teammates through the highs and lows. Players that behave in such a way are more likely to get drafted than somebody who may bring wins but has a poor attitude. If you cannot be active for a majority of the tournament's duration, reconsider whether or not you want to sign up.

Only sign up for formats you are willing to play. If you do not want to play a metagame but sign up to play said metagame, you have no right to complain later if your manager wants to play you there.

Saying "Any but Threat" will make the sheet we'll use to parse through signups believe you only want Threat so please be careful or else a mod will edit your post for you.

Please use this provided format for your signup:

Code:
Players will only be allowed to play the tiers they signed up for during the first 3 weeks. 3k players are allowed to play anything. A warning to managers to no exceptions will be made if you fail to draft anyone for a slot.

You have until Saturday, June 25th to sign up if you haven't already. The thread will be locked after that date and you can not signup thereafter.

Do not post in this thread if you are not signing up.

Name:Jase duken
Metagames: NDM,Bo3,and ubers
Timezone: gmt -7
Act issues: weekdays i am busy in mornings and afternoon but in the evening im mostly free. Weekends I am free

amberr
all
-3
dunno
signing up for likes if you draft me youre a clown but ill play
Last edited: Jun 11, 2022

tier
all
-4
Probs
RT : signing up for likes if you draft me youre a clown but ill play

name: pinorska
metagames played: all
timezone: est
activity issues: none
I topped this ladder and am good at building it, have lots of other pl experiences and i'm super active