my opponent didn't show up, i even waited an hour for him. calling activity

My opponent, LolBron James, missed our scheduled time and said afterward I could take the win. Check my VM wall for confirmation.

Opp missed scheduled time and I really have some problems with scheduling. Check my vm wall

Jabba and I were looking to play today (Sunday) but I couldn't find him this evening, the only time I was available today, and he said that fit in his timeframe.

Not trying to request (slime) activity, just a heads up, will try to play sometime b4 deadline although our schedules are pretty tight.

I am withdrawing from the tournament, please give the win to my opponent.

Um, we scheduled for a time and you didn't show up(11:45pm my time), and it was getting until 1am my time and I have school, so I need my sleep. So no, I did not john lol

Final Activity Request
I did an activity post some days ago but i also kinda waited for my opponent to show up and i responded once more on my wall where the initial converstation actually took place. However, my opponent did not respond at all despite being online on smogon frequently as i noticed by checking on his profile. Therefore, I have to request activity or a substitution mainly because of his attitude which clearly indicates that he is not planning to get the battle done.

posting for activity, cant get quick responses from my opponent or any times to schedule in his replies.
Last edited: Feb 13, 2017

Can't play due to exams and shit, Giving the win to rob, gl m8

Asking for a act win, because my opp simply does not answer me

No vm from my opponent for quite a long time, and didnt answer when asking if he could play last week-end. Still waiting for him.

activity, my opponent hasn't logged in for a long time

The Kingpin won 2-0, ggbl. Shoutouts to poke67 and thethornadus for the teams. "Shoutout" to blundy for cheering for me l0l.

My opponent, Galih2612, missed three scheduled days and has since made no effort to contact me or reschedule.

If you're not first you're last

I'm gonna ask for an activity win request here. My opponent's activity has been inconsistent and he/she stopped responding to the posts on my wall before a time was even scheduled. I even asked him if a specific time and day was good and got no response(also waited for him on smog tours at that time just in case, but he/she obviously never came). I doubled posted in the conversation that we needed to get this scheduled because the deadline was approaching and, again, got no response.

Edit: oppo is Jason Genova, if that makes it any easier on the TD's when dealing with all this round 1 shit

I sent a VM to my opponent ages ago and he's ignored me since the first week. I've been active and waiting for an answer but I guess there's nothing else I can do when he doesn't want to play.

Moderator
Won 2-1 against Yarti. Forgot to save the replay of the game I lost, but I used stall and choked very hard. Anyways, shoutouts to LJDarkrai for the team that won me both games:

My opp no respond ,act2

SableyeMyBae said:
So we scheduled to play today at night or on the afternoon, I've been online on the spanish room pretty much all day and if you were also there (which I ignore) you didn't even try to contact me.

We scheduled to play a week before this, you were busy and I told you that we could reschedule for another day. So after being flexible with this you come here to request an activity win when the time you told me to play hasn't even finished yet.

Edit: you also posted that at 2pm gmt +1 which was before the time we agreed to play LOL
Click to expand...

Even you say you were all day with your eyes on the screen waiting for my pm to play, I could say exactly the same, I were all evening and part of the night at the spanish room and I you didn't try to contact me neither. So that's kinda 8 year old apology bro...

Anyway, yesterday we coudn't battle due to certain reasons, but I'm still totally decided to play my opponent, so a few minutes ago I contacted him with this purpose: 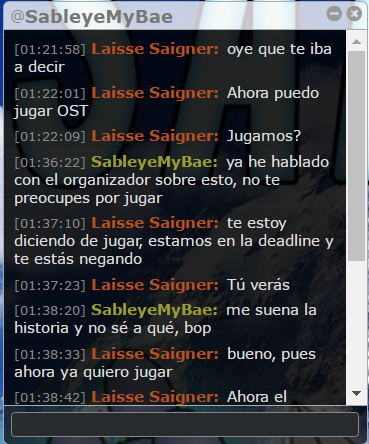 If you can't undersand these logs, basically I'm asking SableyeMyBae for playing our OST battles, and he answered me with a remarkable rude behaviour, saying that he's no more interested on our battle, and his intenttion is not to play, he preffers winning by unsporting and obscure methods. I had an idea of this tournament like an event where we could have fun and show our competitive abilities and knowledges at the same time, but I find ironic that my opponent has a Sableye on its nick, with diamonds in its eyes, when his actions and behaviours just makes us understand he's completely focused on the tournament's prize.

I think this is a very bad lack of respect to me, to people who really wanted to play and enjoy this tournament and they coudn't join because vacancies were full, and especially to players who are wasting their time on contacting their opponents and playing their battles.

My only wish is that, if OST admins have to make a decision about our pairing, then I would like that my intention of playing these battles prevail before all else.