Cyan Sea and Cyan Sky
Not memey, I just genuinely like these titles

Honestly sounds like something Game Freak might do. A bit boring though imo just gonna ignore the reference to bedroom positions

How tf would you design a Pokémon around these?

Look, people give food Pokémon enough flack as is, I don't think naming games after food is a good idea.

Bug Maniac Aydon said:
Cyan Sea and Cyan Sky
Not memey, I just genuinely like these titles
Click to expand...

Change one of them to a color other than cyan and you're good.

Mega-Pokebattlerz said:
How tf would you design a Pokémon around these?
Click to expand...

pokemon i couldn't care less and pokemon i just thought it was funny dude :/

I don't want to be that guy, but "Pokémon Old Dog" may be the dumbest possible name so far. I get the reference, but as game titles they just don't work.

Sorry dude, that ship has long since sailed.

What's the other version? Pokémon Cart?

Yeah, youre definitely the kind of guy who would buy Pokemon Old Dog

Im much more of a New Tricks type player

Depends on whether we did make another Smogoff CAP...
If we didn't, then it's going to be a stand-alone game.

New proposal: Type something in to NeuralBlender, give it stats, type, and moves of its own. 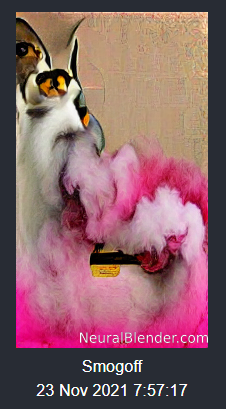 Example, if we type in Smogoff we get this uh... dog? Which is puffing pink smoke out of its... nose?
Type: Poison (smoke)
Moveset includes gas/cloud-based moves like Smog, Poison Gas, etc.
Last edited: Nov 23, 2021

Rlly good names, 100% gonna be added in a future

Releasing the two different versions on different platforms is certainly an interesting idea. The only thing is "Pokémon Console" is needlessly boring, and "Pokémon Switch" sounds awkward with 3 pairs of main series games already on Switch.

Cool idea, but I'm concerned about a potential lawsuit from Nickelodeon.

No. Let's not drag Pokémon into real-life wars please. (I know Pokémon Conquest was based off the Sengoku period of Japan, but that was an alternate retelling of a single country's history rather than a global, highly politicized war.)

If I could ban you from posting in this thread, believe me, I would do it right now.

Rlly good names, 100% gonna be added in a future
Click to expand...

Was gonna make a joke about these games being banned in the US but Orange Head's not the President anymore lol.

Seriously though, naming Pokémon games after names commonly given to actual people is fucking stupid.

Pokemon And and Pokemon Pokemon

Not everyone has seen the Simpsons, so not everyone will get that reference.

Not everyone frequents Smogon Forums, so not everyone will get that reference.

Game Freak has explicitly forbidden showing the killing and eating of Pokémon. Vetoed.

HydrogenHydreigon said:
Pokemon And and Pokemon Pokemon
Click to expand...