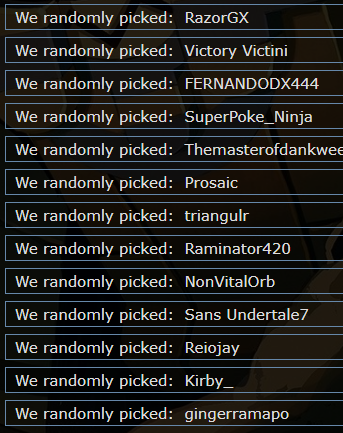 Matches will be best of three except for semis and finals which will be best of five. This is how the three formats for the best of three will be chosen (in a helpful step by step guide):
1. Contact your opponent and each of you lock one format. Example: Irpachuza locks gen7BF, and Rage locks gen8bssf.
2. Each player then bans one tier. Example: Rage bans Hackmons Cup, and Irpachuza then bans Super Staff Bros 4.
3. The remaining tier (Monotype Random Battle) will be played as the third format.
4. Battle each other. The format not chosen by either player is played first (i.e Monotype in the above mentioned example), and the loser of game 1 picks the second tier played.

Note: Whoever locks first bans second. So if A locks Battle Factory, and B locks SSB4, the next step is for B to ban a tier, and then A will ban a tier. That way the same person doesn't lock/ban first both times.
Please note that all scheduling attempts must be done publicly on Smogon Walls. No other proof will count for act calls regarding scheduling attempts.

If you have any other question, don't hesitate to contact me on Smogon or Discord.

IMPORTANT EDIT: The rule of thumb for who locks first is the one at the LEFT of the bracket
ROUND 2

Deadline will be Sunday April 18th 2020!
Also, we'd like the replays to be mandatory for statistical reasons.
Last edited: Apr 20, 2021

Pujo me and ppodd played yesterday and i won ftr

Micaiah said:
Pujo me and ppodd played yesterday and i won ftr
Click to expand...

Must have missed it, thanks!

sorry for the bad mus won vs sprinto in 2 ! sorry very much !

teresbahji said:
sorry for the bad mus won vs sprinto in 2 ! sorry very much !
Click to expand...

Won vs Fakee in 3 ggs

Ideal and the Real

sorry for the spanish (hope that's not a problem lol)