https://pokepast.es/80dadb7b25e4b9ad
i wanted to post this because i think its a heat team thats actually good.
vaniluxxe sets hail for the team. It doesn't need to do anything else but ice stabs are nice and flash cannon hits diancie, a screen can also been useful even if it is only for a few turns. Xatu denies hazards and acts a solid pivot which is nice for an offensive team thats sorta weak to hazards like this one. Rhydon gets chipped p easy but if you make progress fast enough it shouldnt matter. Acts as a salazzle check/fake steel type and phases out snorlax with dtail. Jolteon in hail has boltbeam coverage and its actually pretty strong. Protect is good for scouting mowtom, but the moveslot is really just filler. Life orb does a lot of damage but it means it dies real fast unfortunately. Sandslash is the best hail abuser and ice + knock is good enough coverage to hit like everything in the tier. Spikes are nice because no defogger really comes in on it and you can get one up on the vap switch. Protective pads let you own talon and rocky helmet/effect spore stuff, if you dont wanna run that you can put heal bell on jolteon tho. On hail teams you generally see dragalge and not this dude

but this dude is good :). he fills the slot better than drag on this team because he threatens steels with flamethrower which drag doesnt do. Drag can of course flip turn out but this team would struggle to switch to something non passive after the flip turn. Teleport gives you pivoting so its not like its completely worse in that aspect. Teleporting on sylv switches into sandslash to get up a spike can be real good. Sitrus and harvest give you longetivity and the ability to stay in on stuff to get hits off multiple times throughout a game. He can pretty consistantly switch into/just take silvally-ground and passimian uturns throughout a game although you cant be too careless. The harvest berry also lets you switch into vaporeon easier than dragalge can especially in hail. dragalge has no recovery or anything so if you get a burn while in hail opposing vaps can stall you pretty easily. Can also function as a psuedo-itemless mon sometimes and hail can help get in range of berry. Moves aside from teleport are what you would expect flamethrower to hurt steels, giga as a stab to heal and do decent damage to stuff, draco as another stab good for some bonker yonkers gonkers damage.

https://pokepast.es/a3852803872aac5ei posted this to ask if this team is decent because im new at NU and competetive so i want to know if i have to make few changes to this team

Glicht said:
https://pokepast.es/a3852803872aac5ei posted this to ask if this team is decent because im new at NU and competetive so i want to know if i have to make few changes to this team
Click to expand...

There wasn't a clear direction with this team but the idea is to weaken, lure, or kill the bulky Ground-types for Silvally-Ghost or Heliolisk to clean. Guzzlord does this okay, kind of relies on a flinch on Gastrodon but you can usually beat it since they don't expect a mixed set. Everything else is pretty standard, magnet is chosen on Heliolisk for the better Vaporeon matchup, and in general being able to switch up moves is really crucial with this team. No speed control is questionable but Quagsire can usually offset hyper offense structures, and things like Passimian/Indeedee cna usually be handled pretty okay. Mowtom is trickier but is still perfectly beatable. Overall though some require tricky play, such as vs a Fighting-type, Ghost, or things like Grimmsnarl, but overall has been pretty consistent so far (maintained overall 88~ gxe, over 1640)

Jellicent specs! Wanted to build with Jellicent again because honestly why wouldn't you? Anyways Sandaconda/Togedemaru form a decent defensive backbone, covering most physical breakers along with the Electric types that would otherwise abuse Jellicent. Toxicroak helps to aleviate the Vaporeon/Sylveon weakness, with Xatu and Mowtom providing a Ground check. Overall has worked pretty nicely so far.

Cheese hyper offense but with... Vikavolt! Not much to say beyond this, pretty cookie cutter hyper offense structure. Originally wanted to go with a Zap Cannon set but turns out that it's still pretty weak without a throat spray boost (also just forgot agility existed lol). Got inspired after getting owned by a Vikavolt on ladder. Helps to kill ground types or lure in something like a Sylveon for Salazzle, and overall decent sweeper.
https://replay.pokemonshowdown.com/gen8nu-1618914277

Not much to say here, pivot with Scyther and hopefully bring in Exeggutor on a Diancie/Mudsdale/Stakataka.

Paste​
Made this today. Nothing ground breaking, just wincon on wincon. We all know those monsters that sometimes you just win with on preview, so I’m stacking a few. Only thing noteworthy is the terrain extender on FDD because I found those extra few turns more valuable. I find when facing FDD I’m usually pivoting around with some protect mons/resists stalling out the terrain. Gives me a little bit more to work with.

pictured: why I preface the replays as “vs competent players”

I hope to see a revival of this thread because I think its been correlated with simply put, bad teams. Less competitive teams are of course recommended for this thread, but even if a team isn't meant for a tournament environment, that doesn't mean its bad, and nobody wants to put their solid team in the "haha bad" list.

Regardless I've been laddering with some fun stuff that I think is worth sharing :)

Choice Specs Manectric is EV'd to live a Rotom-Mow Leaf Storm (it needs so much investment why did we not ban Rotom) and Specs Overheat paired with Xatu allows Manectric to actually threaten damage on Ground-types and straight up nuke Togedemaru. Manectric is not fast, or strong, or bulky, and its coverage is average at best. Very cool mon though. You may notice Earth Power on Copperajah, because I've found its better on ladder where Arcanine is more common, although you can also hit Talonflame as it Roosts even while burned, and Stakataka with defense boosts. This Copperajah spread also lives 2 Modest Specs Mystical Fires from Indeedee-F.

Another Choice Specs Pokemon, although a fair bit better, I feel Starmie is often held back by Life Orb and having to pick its coverage, so I figured I'd ditch both issues and just land my moves.

Psyshock also nukes a ton of otherwise fine Starmie midgrounds like Snorlax, Eldegoss, Sylveon, although any coverage move or Flip Turn or Trick could be used.

This team is pretty standard but I wanted to use Golurk since meta trends show that when it falls off, it comes back HARD due to the lack of prep for it. This was not the case. Every attack Golurk wants to click has common resistances and/or low PP. This wouldn't be as terrible if Golurk had any ounce of defensive utility, but Golurk is quite literally a worse breaker than most in every way right now. It relies super hard on pivot-central teams, but it can't even ensure OHKO's once it gets in and is easily forced out. I think it could be better with Healing Wish and some bulk, but CB Golurk is just not good right now.

i am a new of nu and teambuild, just want to share something i build in a chinese team tour.

Want to build around Lapras. It is a good water immune and spd tank. Vileplume and Stunfisk-Galar are used to block Rotom-Mow. No item Xatu for bounce hazard and prevention Poltergeist. Starmie is the second hazard control of the team, also as a psychic resistance with Stunfisk-Galar. CB Tyrantrum is used to tear the opponent's defense line and help teammates better defend.

Want to build around Curse Snorlax. Rocky Helmet Weezing is a very good fighting resistance and can set Toxic Spikes to help Snorlax/Silvally-Ground sweep. Diancie and Rotom-Mow complement each other in resistance, which are respectively the hazard setting and control of the team, while Heal Bell treats the abnormal state of the teammates. SD Silvery-ground is a strong wallbreaker to help Snorlax sweep at the end of game, it also is a Electric immunity. Escavalier is a psychic/grass resistance and knock off opponents' hbd to help toxic spikes work.

This is a stall team i build for others to play. There's nothing to say but I want to talk about this Guzzlord. It effectively alleviates the prediction pressure in the face of choice Tyrantrum, Starmie, etc. Well prevented Salazzle (not nasty plot) and Arcanine.

Thanks for reading, plz pm me if u have any suggestions. 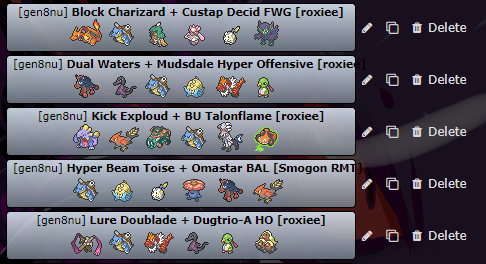 its strong
you don't wanna fight against these mons
who you gonna trick a scarf to in an effort to invalidate them and stall the slow march of death? plume? lax? maybe a little cheeky with the kingdra?
the sets are for the most part generic from pressing the set button on the builder with very minor tweaks when the button gives you the hot garbage

i haven't been dilligent with saving any replays with this team but assuming the presence of three (3) brain cells you can see why its effective+pilot it yourself
You must log in or register to reply here.
Share:
Reddit Pinterest Tumblr WhatsApp Email Link