Side servers generally don't support HTTPS, try HTTP (which worked for me on chrome) http://sports.psim.us/

Also as a note this is for technical support with the main server, not side servers.

Also as a note this is for technical support with the main server, not side servers.
Click to expand...

I'm using Edge for now, but it feels like a temporary solution.

As stated in my original post, removing the S from HTTPS manually does nothing and it automatically boots in HTTPS regardless.

Regardless, thank you for the feedback.

cad.furion said:
I'm using Edge for now, but it feels like a temporary solution.

As stated in my original post, removing the S from HTTPS manually does nothing and it automatically boots in HTTPS regardless.

Regardless, thank you for the feedback.
Click to expand...

Firefox is doing that yes, were looking into a fix.

I'm having the exact same problem. Using a Chromebook and ever since around noon yesterday, it's been saying that it couldn't connect to server. I haven't tested this on any other web browsers, but does anybody have any tips besides what's already been said - nothing has been working.

I'm getting invasive pop up ads on Showdown whenever I click anywhere on the site. There were a few others that I found encountered the same problem, so I decided I needed to report this problem. Has there been a breach on the site? I don't know what's going on

Admin Edit: No we have NOT been breached, we get our ads through google and sometimes google lets bad ads through.
Last edited by a moderator: Feb 10, 2022

Op edit: What, are you going to blacklist the specific website? The website I was sent to changed each time, and I quickly closed the tab each time when it was clear that I was getting sent to windows-secureit or mcafee something or other. Sorry, but I don't feel comfortable purposely visiting a malicious website. Hopefully somebody else can do that I guess :/
Last edited: Feb 15, 2022 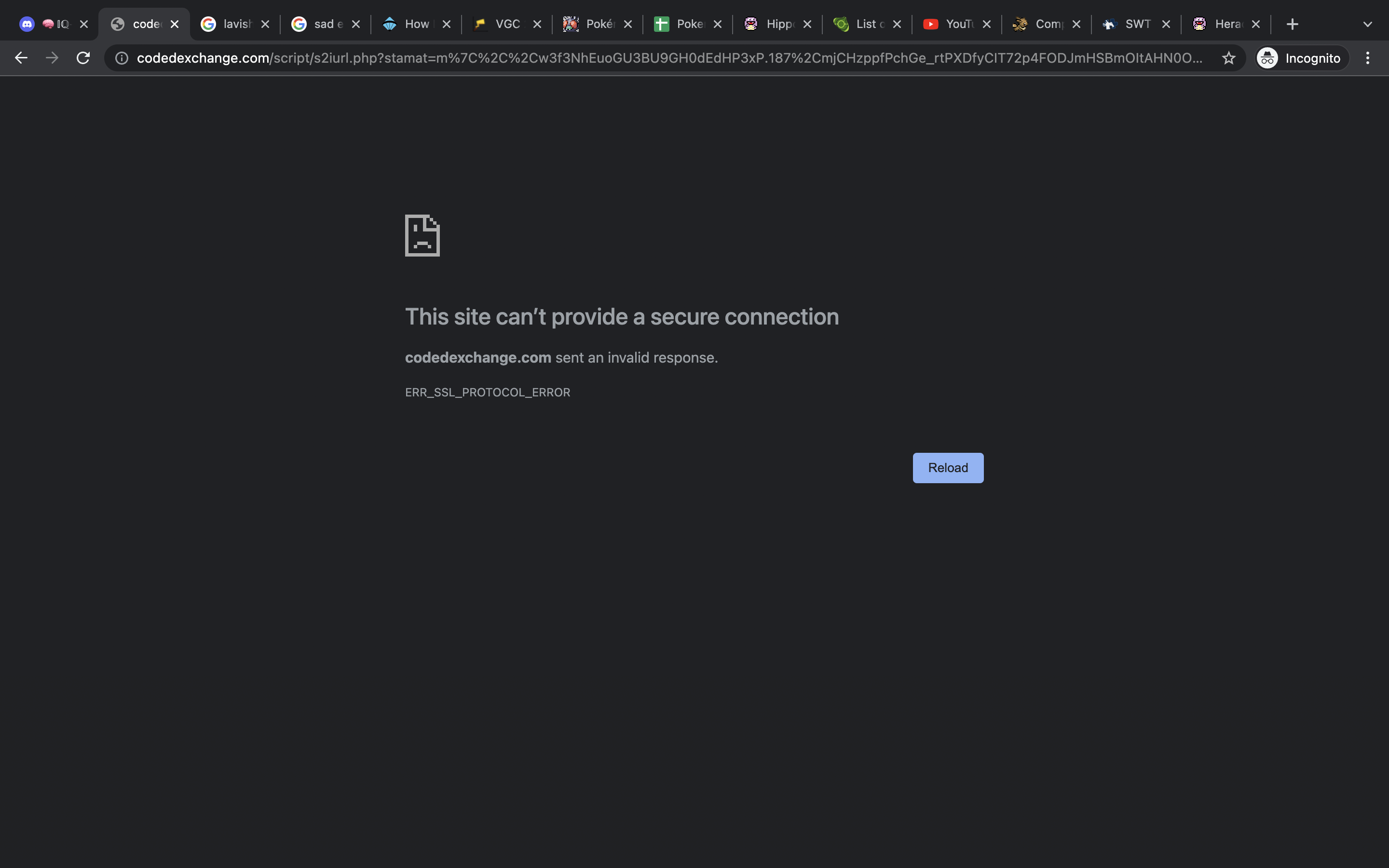 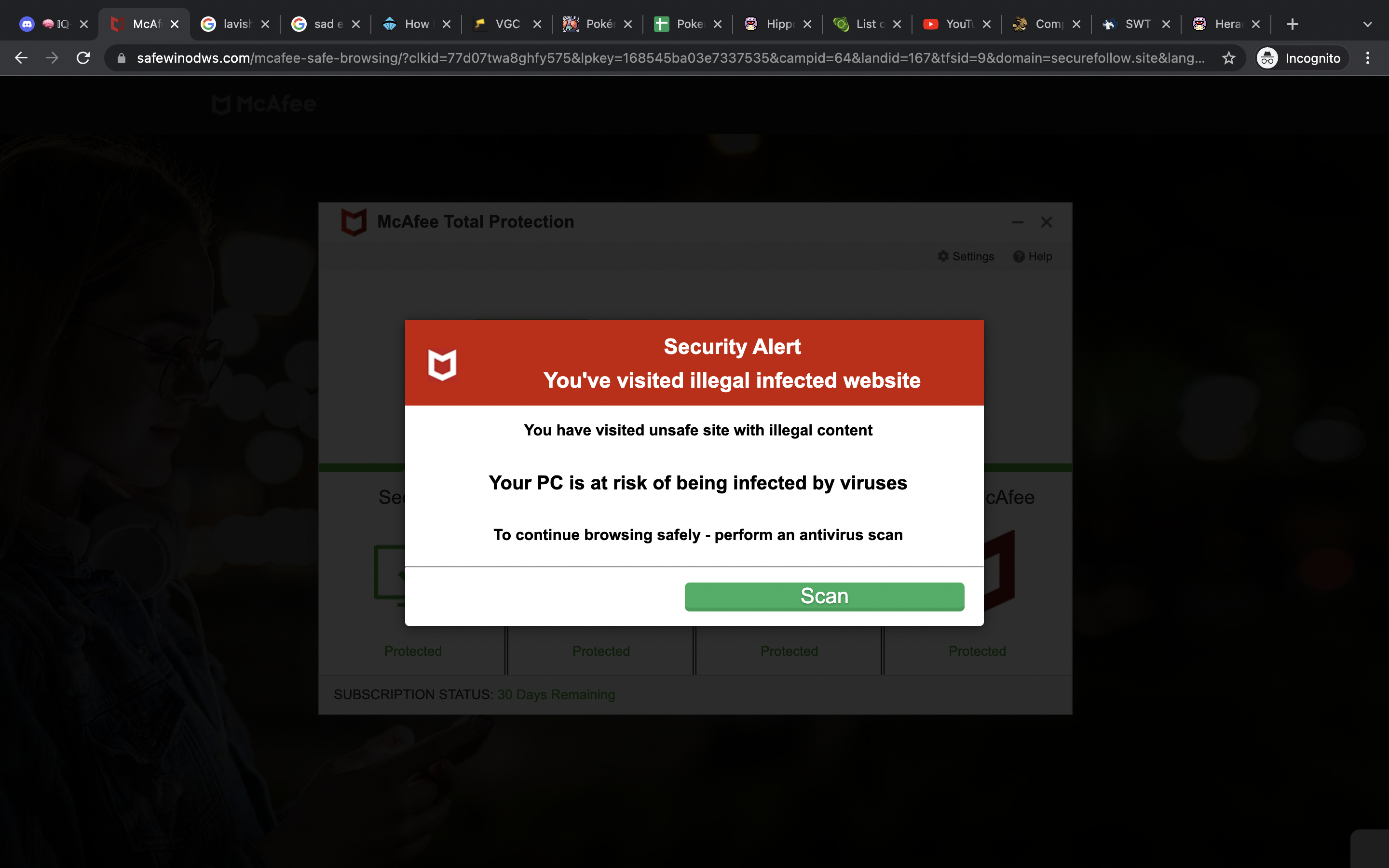 The screenshots are in Incognito mode, but this has happened in both Incognito and Regular Mode.

It seems as if I get redirected to the malicious sites if I leave pokemon showdown idle for too long, as if its replacing the little "you went offline possibly because of the server restarting" window, is it possible someone found an exploit using this?
I read this off of the help thread from that site, to post them here.

if you want screenshots of the sites specifically i can send the links to them :))) im not going to open them again sorry

hello so basically i have a bug. it started like this. i was on teambuilder, making a team. im on mobile btw. and basically i disconnected. when i reconnected, all the selections for moves and items were gone. it was just the background. stats were fine tho. and so i tried to restart the website, still wasnt there. restarted my phone. still wasnt there. and no one has the same problem as me. so yeah im worried this will be permanent. maybe a server restart or smth might fix it. but yeah. i can do moves and items manually but its kinda annoying that they dont appear and i cant see my selections.

Showdown gets stuck on "Loading ..." on phone regardless of browser or wifi/cellular data, issue persists even on other servers that are not the main, cannot even access rooms or login

1. Tried with no luck deleting cache/cookies, clearing website data, changing to other wifi, resetting to factory settings
2. Going incognito mode doesn't help, https://sim3.psim.us/showdown/ gives the "Welcome to SockJS!" as it should
3. Relevant to note that occurs only on mobile, on computer PS works just fine

I’m trying to choose my username to login on Pokémon showdown and when I put it my password it says it’s incorrect. Then I come back to the forum to change my password (successfully) and go back to PS and it doesn’t work again??? I am confusion

1. Windows 10
2. Opera GX
3. Chrome and Microsoft Edge
4. February 20/21 i can't pinpoint the day but i believe it was yesterday night
5. KazzyTojoChairman
6. Whenever i try to play showdown i receive this message

tried basically everything already, retry/retry with HTTP do nothing

also i went into this link

edit: i also get this one message when i try to change names 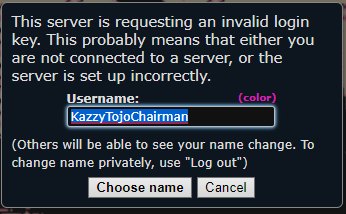 so maybe i was banned? but i doubt it since i barely even talk in battles :/ and i've never typed a thing in the other chats

edit 2: i tried using a VPN which now lets me play but now my account is permalocked? wtf? how can i get my account back to normal? also when i try to make a ticket is says that my ip is the same as "simplechimp"?

I cannot connect to main ps server or smogtours. I tried connecting to side servers like https://sports.psim.us/ and it works.
If I'm using my mobile data instead of the Wi-fi, it connects just fine.
I also tried connecting using a VPN and then it works. So it looks like something IP related.

iPadOS 15.3.1
safari
So this like alkassab’s situation started like 2 weeks ago it’s the same problem they’re currently having where I can access the site but nothing loads only team builder which all I can do is create new teams and boxes cant do anything else I don’t know what the problem is but it wont load it says loading... on everything but nothing is loading can somebpdy help? FIX THIS PLEASE. 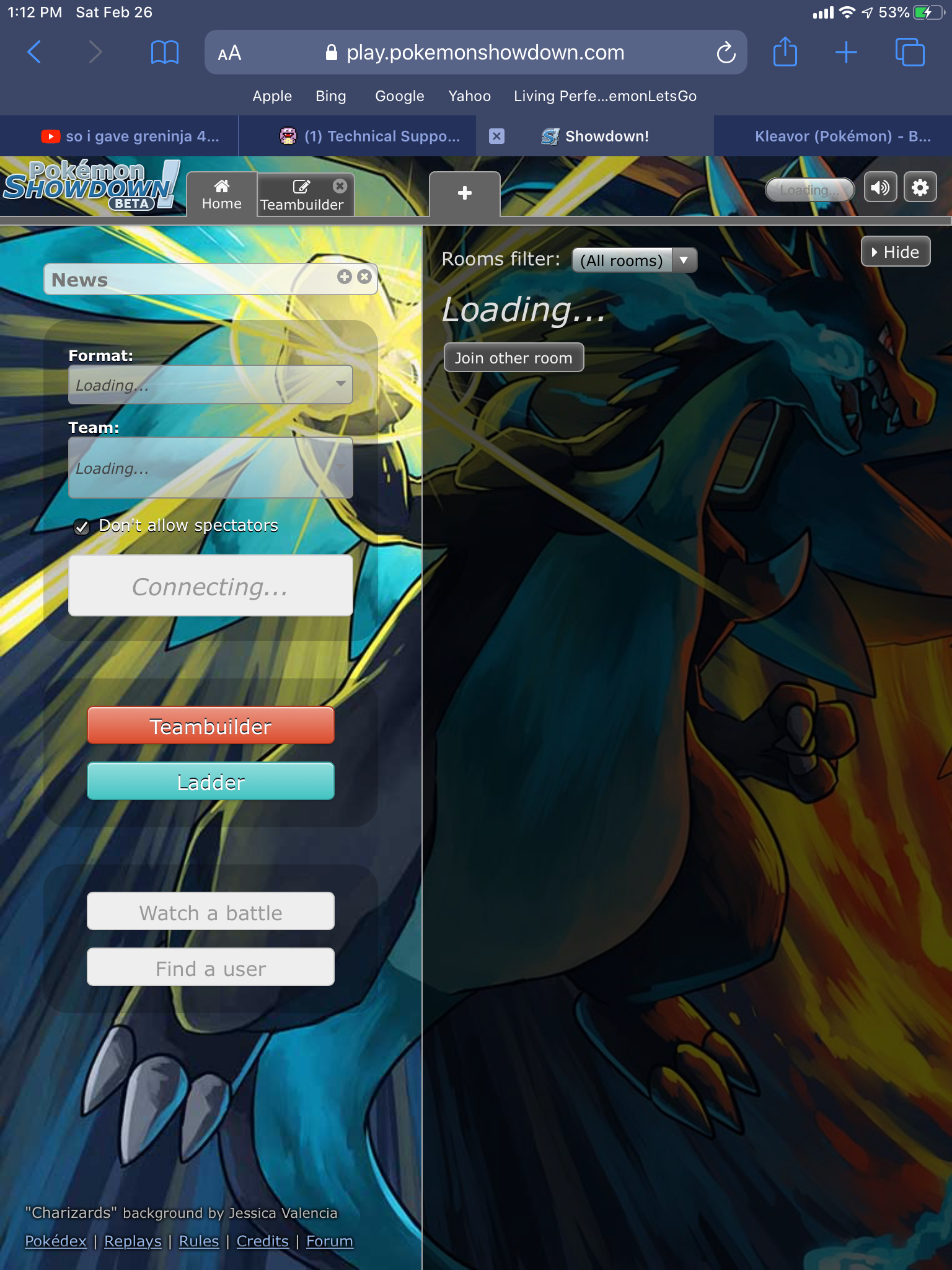 1. Windows 10
2. Chrome
3. Microsoft edge, still didnt work.
4.Today
5.Synrex_(Bruh)
6. Whenever i try to play showdown it just does this. I've tried restarting my router countless times and my pc, tried it on mobile even on the showdown application problem still persists 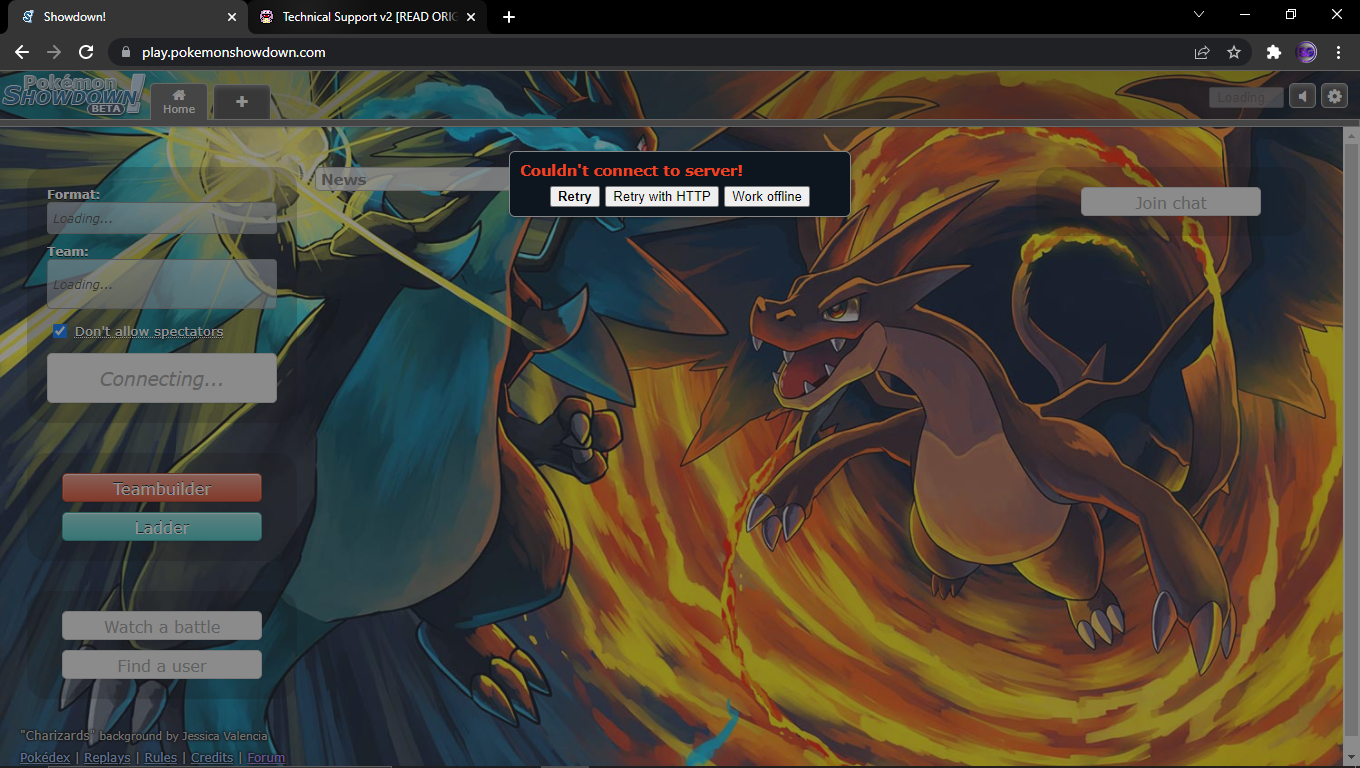 Nol said:
Hi all, the devs are aware of the fact that there's a problem, no need to keep posting about the same issue

Mia edit: I've found the bug and am working to fix it. Patience, thanks!
Click to expand...

Hi thanks for working on this! Any update so far? I still have no succes yet trying to connect with my phone.

April Fools Day sprites are still loading for me by default.

doing /afd off or /afd disable only fixes the problem until my next reload.

How do I permanently fix this?

I've tried clearing my cookies but the problem still persists.

This is only on mobile though (Android, Google Chrome) and when I use a regular window. It loads regular sprites when I open an Incognito window

There seems to be an issue with afd sprites still being in effect for some users on the server. Everytime I log onto PS, the default sprites are afd sprites and I have to use /afd off to remove them. I have been informed other users on the site are experiencing this same problem. I have also made sure that I am using the main server, that doesn't seem to be the issue.

In PS teambuilder, the list of available Pokémon to add to your team is disappeared, same happens with moves and items, but not abilities

I've been having similar problems. My old Chromebook literally broke while I was playing Pokemon Showdown, and the new Chromebook I got can't connect to PS at all. The main server and the Smogtours server are both inaccessible to me, but other servers such as sports seem to work just fine. My phone is able to connect no problem even without the help of HTTP, but my Chromebook won't connect with either option.