32 Sp Def. EVs allows Hydreigon to live 2 Hydro Pumps after rocks and OHKO with Draco Meteor or Z-Move. Hydreigon can also switch in on EQ and Fire Blast from Garchomp and threaten it back. It must be regarded that Garchomp must megaevolve in order to be outspeed by it.
Last edited: Apr 5, 2019

Moderator
sry Mannat I’ll give it to you next week

Greninja can’t switch on anything aside from predicted Rocks / Spikes from these two, but once its in, it just clicks U-turn for AshGren or Ice Beam for MegaChomp. While U-turn doesn’t OHKO AshGren, it does do enough that the potential priority in the back will ensure the kill. Or you could just use U-turn twice.
Last edited: Apr 5, 2019

M-Venusaur can eat up hits from both the mixed-specially based Garchomp and Ash-Gren and can reliably recover off on them with Synthesis and/or Giga Drain. Chomp and Gren have no recovery so M-Venu can easily outlive their attacks and neither members of the core have a super-effective move on their sets vs Thick Fat M-Venu. Players could run Leech Seed over HP Fire for even more recovery, even though it's not really needed.

: Tapu Fini is really good right now and one of the biggest worries when using this core.

: Draco Meteor / Dragon Pulse are unviable but it can pressure this core regardless.

Magearna is not 3HKO'd by any of these targets (unless Tapu Fini runs Nature's Madness) and proceeds to use the two Pokemon as setup fodder. Against Mega Venusaur, Wiki Berry helps more to set up due to repeated Leech Seed + Hidden Power Fire chip which may wear this Pokemon down quickly. On the other hand, Fairium Z can be run for Tapu Fini if an immediate nuke is needed.

Tapu Fini is a fairly safe setup fodder for Kartana. Then, a +2 ZNormal OHKOes M-Venusaur. However, Kartana shouldn't set up on M-Venusaur because of HP Fire, and be careful of not wasting a Z-Move on the wrong target.
Last edited: Apr 12, 2019

Salazzle-Totem (F) @ Black Sludge
Ability: Corrosion
EVs: 252 HP / 40 SpD / 216 Spe
Timid Nature
IVs: 0 Atk
- Substitute
- Disable
- Flamethrower
- Toxic
Salazzale is able to set up substuites against Mega-Venusaur its ability also allows it to toxic Mega Venusaur which will never miss.
Salazzale manages to outspeed Tapu Fini. It can toxic the Fini while its sub is up disable its scald then set up a substuite and heal its hp back from its black sludge. It may struggle if Tapu Fini taunts it but Salazzale can still take a scald from Tapu Fini.
12 SpA Tapu Fini Scald vs. 252 HP / 40 SpD Salazzle-Totem: 236-282 (69.4 - 82.9%) -- guaranteed 2HKO after Black Sludge recovery

Tornadus-T can switch into Leech Seed and 2HKO Mega Venusaur with Hurricane, and it's not bothered too much with the residual damage because it can recover thanks to Regenerator, Sludge Bomb can give it some problems though, so it needs to be quite careful, having to predict Leech Seed, Synthesis to enter with safety.

Despite not having super effective coverage, can remove Fini's Leftovers with Knock Off and SSSS can damage it seriously, at the point that SSSS + Hurricane can KO it with some minor damage

Despite being lock, this monster can still prove to be an issue for this core as tapu fini doesn't appreciate switching on it while being the dark resist.
Well, Hoopa-U is basically a fat core destructor so nothing surprising. But the fact that if it's bring on venusaur allow him to do a huge amount of dammage to almost anything is really helping it here. Despite only having 75% to hoko venu with rocks, venu is a mon that is hard to keep a full, plus venu isn't doing much back. Moreover since fini is 2hko by zen headbutt and ohko by gunk shot, it can't switch in either.

PS2: If I may, with that salazzle you may succeed to sub against venu thanks to disable but you basically won't toxic tapu fini, misty terrain is a thing.
More over, salazzle is underwhelming so anyway this won't achieve much.
Finally, as it stated in the OP this thread is for OU viable threats, I know I'm no one to tell you this but you've done it twice now.
Last edited: Apr 11, 2019

Psychics in general are a hassle for this core to deal with, but Lele's the one that sprung to mind here. While you obviously don't want to switch lele in on a sludge bomb, it will just annihilate venusaur with +1 terrain boosted psyshock. Fini also has issues dealing with Lele even if it wins the terrain war by switching in, as +1 shattered psyche OHKOs after basically any chip damage.

And of course, this entire scenario is pointless if Rocks are up, however, the core doesn't involve that and if you're using Zard Y to beat this core, you definitely don't let Rocks stay up anyways

*Adamant turns many of the rolls into actual KOes, letting you take less damage, however I still prefer Jolly because Exca is slow outside of Sand

Between Sand chip and a well timed SD + 2 Earthquakes, Excadrill dismantles Venusaur. It can then use Corkscrew Crash to remove Tapu Fini as well. It should try to avoid setting up on Fini, as a Scald means its doom due to its damage output.
Last edited: Apr 13, 2019

The definition of OU Pokemon, Lando-T. Lando-T can get to +2 easily vs M-Venusaur and only fears switching into a Scald from Tapu Fini. Lando doesn't need to blow it's Z-move on Mega Venu, as +2 Fly is easily able to OHKO the fat dinosaur, saving it to smash through Tapu Fini. But even without an SD up it has a good chance to 2HKO Fini after rocks/chip damage with EQ on the switch. 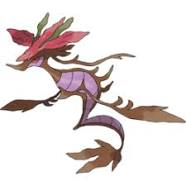 I belive that dragalge isn't just a Tapu Fini hardwall. He can wall many other special Attackers in the tier, and can phase setup sweepers with Dragon Tail, and can TKO the two bulky fairies (Fini and Clef) as well as AV Tang. He can safely switch into Heatran, being able to tank Earth Power Pretty well, and phase him. Same Goes for Volc. He can also get free burns with scald if you predict the switch on many mons, but this is especially important with Lando-T and Garchomp. Dragalge in my opinion is a super underrated mon.

: Where Mega Venusaur is supposed to be a check to Kartana, Swords Dance variants can overwhelm it very easily.

Excadrill can threaten both Magearna and Toxapex with a +2 Earthquake, which OHKO's both. While it cannot use Toxapex as fodder due to Scald, This specific Magearna is complete fodder for Excadrill.
Last edited: Apr 17, 2019

Ok so apparently Pex can still take a +1 Psychic after Rocks even with that much Defense investment, so catch it with the Z-Move. Busted bug easily takes care of Magearna, unless of course they make the pro-predict and Heart Swap as you QD....and they still can’t do anything.
Last edited: Apr 17, 2019