This was my first post on the matter. The discussion that follows speaks for itself. Compare it to the reactions on dodmen's post. Hypocrisy much?
Click to expand...

if I walked into the capitol building while Congress was in session and said the government should grant free ice cream as a constitutional right, I'd get thrown out

if Obama walked in and said the government should grant free ice cream as a constitutional right, he'd probably still get thrown out because sadly the US government is anti ice cream, but people would take him more seriously

people who have proven themselves to be good at things tend to be given the time of day over people who aren't, even if they have the same ideas. basically, git gud and people will listen to you. that's how the world works

also people have been criticizing usage-based tiering for years. you're not the first

Wouldn’t it only be hypocrisy if the exact same people who shot you down are the ones discussing and promoting it in that thread? Just because the different groups of people who are promoting the idea in that thread and the people who shot you down can be lumped under the category of smogon users doesn’t automatically make everyone hypocrites, especially when you consider the majority of people don’t check these usage threads very often outside of omg what changed?? On the other hand if it is the exact same people then you’re absolutely correct to call them that. I’d also like to point out that the discussion there seems to have moved to a much less drastic change compared to the original proposal, but yes your proposal and the original were very similar, although I don’t think there was ever a chance that would get implemented.

pokeisfun said:
A lot of people agree with you that tiering by usage as it is has some problems (like losing Serperior) so they are discussing ways to fix it here https://www.smogon.com/forums/threads/lower-tier-shifts.3638656/#post-7851255
Click to expand...

Unfortunately I don't have a fancy thing under my name to talk there so I'll leave my thoughts on the matter here:

- Using the stats of the last 3 months isn't relevant when a tier has had major changes during that time (like bans following suspect tests), so the interesting timespan to look at is "x months since the last major change in the metagame". The drawback of this method is having shifts for all the tiers happening at different months (is this even really a drawback ?).

- The 20-3-1 weighting appears to be a problem when trends cause rises so it might be a good idea to adjust it or remove it completely. The original post about it (almost 10 year old !) mentions it's based on how previous months predict the usage of the following one, I'd like to know if anyone can confirm these numbers, it's likely that they don't fit anymore, especially when a tier hasn't changed in a long time.

This was my first post on the matter. The discussion that follows speaks for itself. Compare it to the reactions on dodmen's post. Hypocrisy much?
Click to expand...

A bunch of people pointed me here so I figured I'd explain something. dodmen's original proposal in that thread had just as much of a chance being taken at face value (none), but unlike the discussion that happened here that talk very quickly moved on to something that could realistically happen (changing how rises works). Sam even repeated what I said here that getting rid of rises isn't happening. If you had proposed the latter then that would have been hypocrisy, but I wouldn't have shut down such a discussion in the first place because it would have been a much more realistic proposal.

WE DID IT BOYS

Gastrodon moved from PU to OU

What even is this thing(not literally I know it’s a sea slug)? Like it’s literally only been in NU and OU throughout its entire experience as of now and it just amazes me.

All right, here are the quick-changes for August.

Threshold for quick drop in the first month is 1.71%

what percentage is needed for a mon to rise?

Inferno Monferno said:
what percentage is needed for a mon to rise?
Click to expand...

That's literally the only shift for August, the rest now resides in BL. 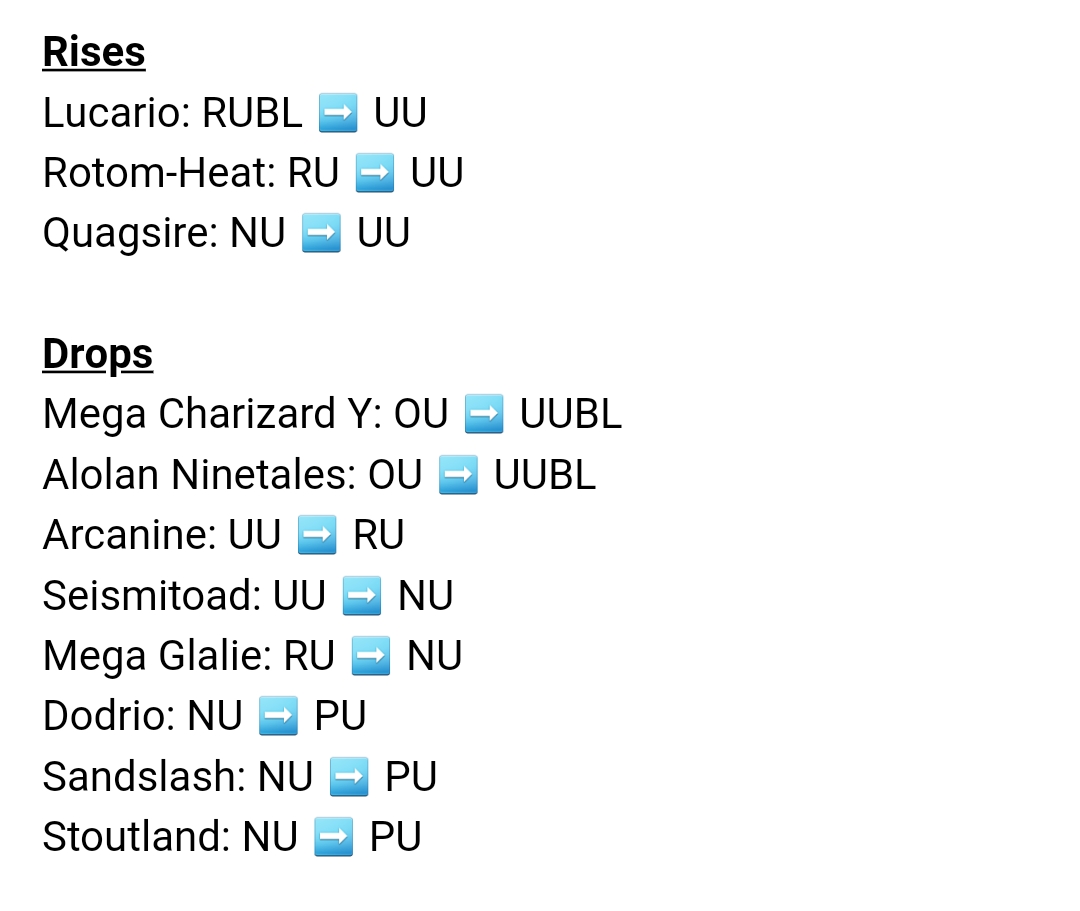 MaahirMomtaz12 said:
How it would look like with 3.41% usage

Seismitoad would fall to NU because it rose from NU to UU.

Tuthur1 said:
Seismitoad would fall to NU because it rose from NU to UU.
Click to expand...

It's been UU for half the year now. I feel it'd just drop one tier

so Arcanine eludes dropping just because its quickdrops month once again

this happened sometime in the spring too

MaahirMomtaz12 said:
It's been UU for half the year now. I feel it'd just drop one tier
Click to expand...

It doesn't change anything, it was the same for Kingdra.

Why do the pokemon that rose tiers (Toxicroak, Ferroseed, Moltres, Gastrodon etc) have usage in their former tiers?

Yasuo said:
Why do the pokemon that rose tiers (Toxicroak, Ferroseed, Moltres, Gastrodon etc) have usage in their former tiers?
Click to expand...

Because they didn't rise on the first day of the month. The stats take a few days to come out, then there was an issue with the June stats, then it takes a few hours for them to implement the bans on Showdown. For example, the July stats just came out today, so Stoutland will have usage in NU for next month's stats since people had a week to use it in August
Last edited: Aug 7, 2018

Yikes, Mega Glailie would be terrifying in NU. Maybe it will pick up a bit now that Entei's gone. Don't imagine Dodrio would last long in PU either

Did I miss the decision to make quick drops happen because of 1 month usage instead of a 3 months average or was it always like that ?