duck said:
Guys, I just want to say this game is getting a bit ridiculous. It takes TOO much time overall. At this rate we will end in 2021. I am considering leaving the game, I cannot drag this game for like a year...
Click to expand...

We have found another cohost due to both hosts at the moment being quite busy - hopefully the game will speed up significantly. Apologies for the delay.

Round 2 has ended for the Fruit Stand.

Deadline for round 3 for the Fruit Stand will be in 72 hours due to holidays in various parts of the world.

There were some issues regarding the compiling of actions - it has been dealt with.

Your fruit will not be counted unless you have provided prices for both of your fruit.

Gimm1ck said:
Round 3 is over.

You mean round 4 right?

in response to your complaint that the game was going too long, the hosts have decided to retaliate by keeping the game in an infinite loop

duck said:
You mean round 4 right?
Click to expand...

Yes, I did; thanks

Hey guys, will be PMing individual players at once.

These are the final results for Round 4.

Gimm1ck said:
These are the final results for Round 4.

In addition, we'd like to remind our players that there is a bonus garnet for every $10 garnet earned.

I send a token of life to meeps! 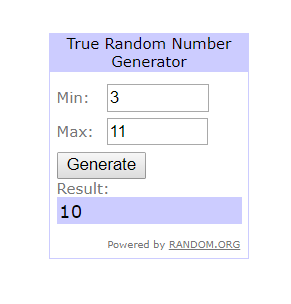 
In this game, you will need to use clever predictions and mental maneuvers to outplay your opponent by placing down higher numbers.

Rules:
In case of a tie in the end of the game, the game will be re-run.
Ivy, fart, please schedule a time you can play this.
Last edited by a moderator: Dec 7, 2019

After a thrilling match of Black and White, the first game ended in a tie - and in the second, Ivy prevailed over fart, taking the lobby owner's garnets.

The next game is Today's Menu, which the next post will discuss.

I hope the survivors didn't eat too much of their fruit they sold, because now it's dinner time.

The next game is Today's Menu.


In Today’s Menu, you will guess how many players placed the same order as you to earn points.

Today’s Menu will be played over 4 rounds of 48 hours each. During each round, you may choose one of three different items to order: Chicken, Steak, or Salmon. You will also guess how many people submitted the same order as you (one of five tiers as listed below: you do not necessarily need to guess the exact number). Once you submit your order for a round, you cannot change it, however you are allowed to change your guess for the number of people who submit the same order as you up to once per round.

At the end of each round, every order and guess will be publicly revealed, as well as the score up to that point. Players who guessed correctly will earn points based on the number of orders received according to the following system:

Oh, one more thing. Every four points nets you a garnet, and every point beyond the sixteenth grants you another garnet.
Last edited: Dec 8, 2019

Announcement of when the game will begin coming soon, likely today.

Hey guys, VigVig here. For people that dont check the ps room, I'm gonna be cohosting from this main match onwards, so don't be alarmed when u see me in ur host PMs. Good luck all :D

Please use this time to communicate and strategize with each other.

Please use this time to communicate and strategize with each other.
Click to expand...

The game is now underway.

sorry for the delay. Here are the orders for round 1 of Todays Menu! 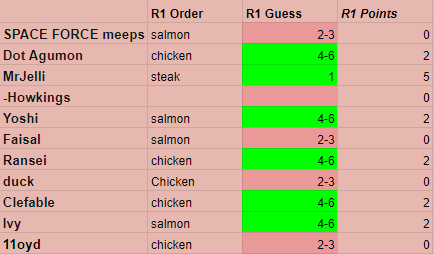 Here are the standings after 1 Round

Hey, everyone. We're delighted that everyone submitted before the deadline.

Here are the orders and guesses for Round 2 of Today's Menu! 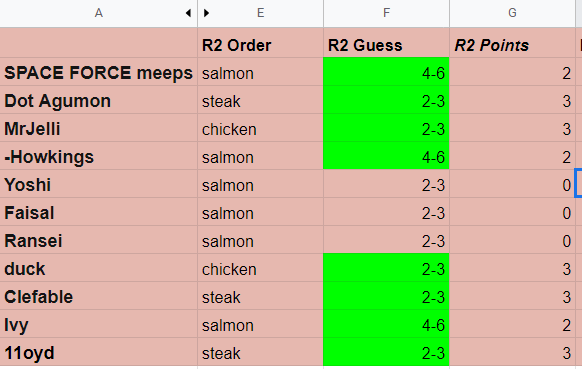 Here are the standings of the game so far after Round 2!

If there are any math errors or ordering errors, please let us know and we will correct them.

Round 3 results are going to be delayed as due to PS being down for myself and SE yday we were unable to reach out to people and remind them to submit.
You must log in or register to reply here.
Share:
Reddit Pinterest Tumblr WhatsApp Email Link