If Ditto transforms into Eiscue, its Ice Face does not work
https://play.pokemonshowdown.com/battle-gen8ou-1022449642

Normally you cannot Dynamax when Struggle is your only move, with PS showing an error saying "Struggle needs a target". On turn 10 I am Imprisoned, but PS still shows a Metronome option/the Fight menu instead of Struggle (normal due to lack of info + no undoing) and thus I can still activate Dynamax. 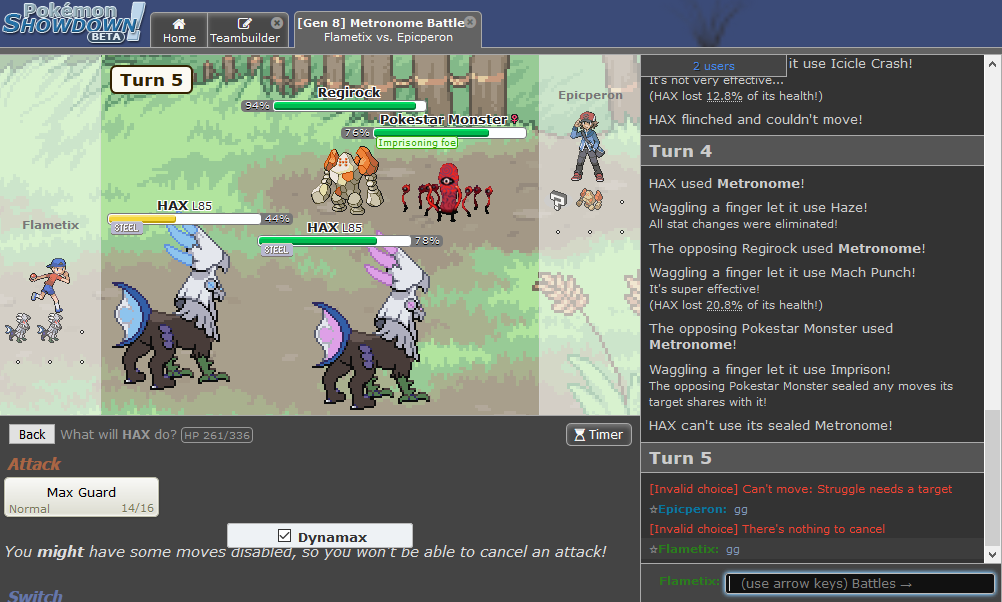 Bug Summary:
When switching out, Eternamax's HP is not getting reset to regular non-Dynamax levels, and every time it switches in, Eternatus's HP is doubled again thanks to dynamax. This allows it to reach ludicrous amounts of HP simply by switching out and in repeatedly.

https://replay.pokemonshowdown.com/gen8customgame-1022500642 (24 Pokemon, 24 moves/mon, level 9999)
Key points:
Turn 10-14: Regenerator progressively getting less effective on Eternamax
Turn 15: Grassy Terrain heals for practically nothing for same Eternamax (was set by Max Overgrowth)
Turn 17+: Regenerator Eternamax takes practically nothing from all attacks for the rest of the battle
Turn 49: +2 Huge Power Mewtwo Mega X OHKOes enemy Eternamax after Stealth Rock and Stonesurge with Light That Burns the Sky (working properly here; in my experience that attack does 90+ to fully invested Eternamax)
Turn 51: Same Mewtwo uses Photon Geyser against Unaware Eternamax, dealing 25% damage instead of ~50%. In the replay I chalked this up to Photon Geyser being bugged, but it's more likely that the Eternamax switched in once before and had double HP.

You can also notice that as the replay progresses, eternamaxes are in general taking significantly less damage than they should across the board thanks to this phenomenon.

edit: rewrote to say exactly what the problem is instead of just giving a replay.
Last edited: Dec 4, 2019

I encountered a bug where pain split was acting oddly. At turn 22, pain split just healed both pokemon without one losing any health.
https://replay.pokemonshowdown.com/gen8randombattle-1022518424

Edit: Sorry all, didn't notice this was already resolved.

For example, let's say a Pokemon has 120HP. It Dynamaxes and the HP becomes 180. On Showdown, it would take 18HP of Life Orb damage, but it would take 12HP of damage in the games.

Here is a video I just recorded about this happening in the Battle Tower. Notice my Barraskewda has 137, which becomes 205 after Dynamax, and it takes 13 from Life Orb. I noticed this a week or so ago but I just now had the time to get proof.

What? Showdown fixed this a long time ago, they are doing it based on base HP.

The filter for 'Quash' in the teambuilder displays it's legal on pokémon that used to learn it via TM in USM (Kingler, Mew, Pyukumuku, Vespiquen)
When putting the move in the moveset/ Validate the team it correctly displays as illegal. 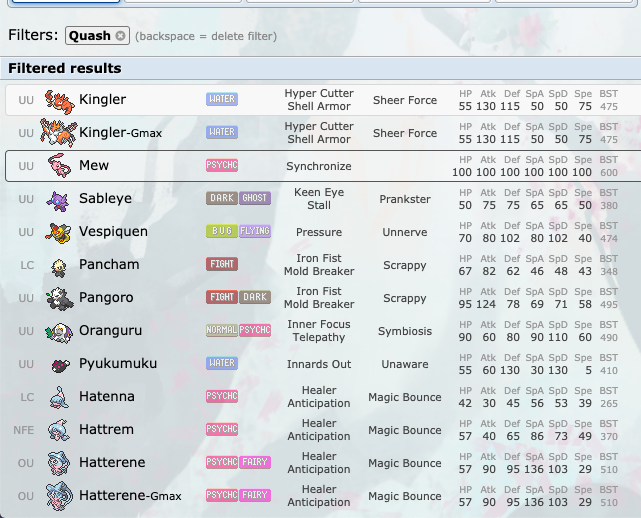 https://replay.pokemonshowdown.com/gen8doublesou-1022576859
On turn 7 my opponent dynamaxes hitmontop and switches out, and then brings it back in and gets to stay dynamaxed

I dont think Pain Split is working correctly, as you can see on turn 15, when my opponent uses pain split, i dont lose HP even if he clearly has less HP than me and regains from his attack, and on turn 16, the pain split drops me to 12% hp, which represents 45hp which is impossible since i have 394HP and since his gengar has roughly around 170HP at minimum

Not sure if this has already been pointed out, but in Gen8 AG I just had a solosis use pain split on my golurk resulting in NO damage to Golurk, but a 100% heal to the Solosis. Unless something about pain split changed this gen, I suspect this is a bug. Happens on turn 4 here... https://replay.pokemonshowdown.com/gen8nationaldexag-1022610288

it's a billion lions

gmax moves are marked as "[check] Max Move" in /dt, but dont show up in /ms max, all. /ms gmax, all works though even though it isnt in /dt

For some reason the whole Pikachu line isn't legal with Volt Tackle when it should be for SwSh. When will this be fixed?

AldrichYan said:
For some reason the whole Pikachu line isn't legal with Volt Tackle when it should be for SwSh. When will this be fixed? View attachment 209750
Click to expand...

couple of bugs
1) Pain splitting gives hp but doesnt reduces the opponents
2) jolteon for some reason not taking damage by spikes despite it being LO
Click to expand...

1. pain split has been reported 5 times already.
2. it has taken damage. the damage was healed thanks to volt absorb

Dawn of ares said:
1. pain split has been reported 5 times already.
2. it has taken damage. the damage was healed thanks to volt absorb
Click to expand...

dont skip turns people it will make you look dumb

I'm aware Pain Split has been reported already, but Neutralizing Gas seemed to not work after Pain Split's use. I'm not sure if that was known information or if it is a separate bug altogether, but I figured I'd post the replay anyway.

This is also a Pain Split one. But I figured, let's post it just in case. On turn 4, my opponent's 30% Weezing used Pain Split on my full health Doublade and it brought it down to 2%

Dragon Darts does not target a single pokemon twice in doubles, if the other pokemon is unaffected
https://replay.pokemonshowdown.com/gen8battlestadiumdoubles-1023089465

it should have hit the braviary twice since grimmsnarl is immune. Also tested with protect and it is not working as intended there either

Not sure what happened here, so after my opponent's Hawlucha got the Dmax and unburden boost and I sent in my own Hawlucha to revenge kill it (it got the electric seed unburden boost too), his hawlucha was still faster. I was wondering if this was a speed tie, but apparently it wasn't as we both posted pics of our spread in the battle [I was 335 Speed and he was 325]. Pretty sure this is a bug as I can't think of anything to explain this...