Welcome lords and ladies to Week 3 of CAPPL VI! Your deadline is Monday, August 3rd, so get your matches done before then and get in contact ASAP!

Furthermore, based on certain events that occurred last week, I felt it necessary to amend some rules, so please read through the rules sections for those changes or read the New Rule Changes below.


- Unless you are playing in SS Bo3, all matches will default to Bo1.

-All matches played must have a replay saved. It is the winner of the match who has responsibility to post the replay for match, though the loser is definitely allowed to confirm the loss with a reply as well, and teammates are allowed to post replays as well; the main point is that replays have to be presented. It is unfair to NOT have your match's replay shared because if every replay is available then it presents an equal access to the proof of the players' skills in the context of this tournament. Not sharing replays makes it harder for a particular player to be studied, which is unfair to the players that do put themselves in the public eye via this tournament and their replays.

-Matches must be played in their corresponding format. Do not play in Custom Battles.

-Try to contact your opponent immediately and VM them/post a message on their Smogon wall. Keep scheduling public so that your scheduling attempts can be verified. NEW: If you are having trouble contacting your opponent for match scheduling, contact the opposing team to help notify your opponent or get a substitution for them if necessary. If you opponent agrees on a scheduled time but does not show up for the match, then record proof of this via a screenshot, video, etc and post it in this thread or PM it to LucarioOfLegends. If your opponent misses a scheduled match on a Saturday or Sunday, you may use your screenshot as proof for an activity victory. If you opponent misses a scheduled match before a Saturday, it is expected that some sort of serious rescheduling effort is made by both parties unless you specifically stated earlier that you would not be available Saturday/Sunday and your opponent acknowledged this. If there is a serious time conflict between players, then at the earliest available opportunity a substitution should be made. Captains and Co-Captains are the only ones allowed to make substitutions, and they can do so by replying to this thread by stating which of their two subs are subbing in for which starting player. More often than not if an opponent misses a scheduled time during the beginning of a week, it is expected that serious rescheduling efforts will take place and no immediate activity win will be given. If you scheduled a match and then realize you can't make it, it is 100% in your best interest to let your opponent know ASAP so that rescheduling or subbing can be done.

If a team is 1 vs 1 (or 0 vs 0) and all remaining matches have questionable activity calls, then the CAPPL Johning Clause will activate and both teams will end up losing the week. It should be every team's top interest to avoid a draw situation by having at the bare minimum 3 matches played each week, though obviously having all 6 matches played is preferable. This clause exists because it's flat out ridiculous if a team can't play more than half of their matches every week. [This rule is making it's return from CAPTT I. It's never had to be activated before and let's keep it that way. Note that this clause do NOT impact a matchup where it is clear that one team deserves multiple activity wins. This clause is reserved for when there's no appropriate contact between multiple sets of opponents between two teams. Again, the clause has never had to be activated in the past and this is more of a harsh deterrent against lack of scheduling.]

-Ghosting is not allowed, nor is any form of psuedo ghosting. Giving advice to a teammate or friend while they are playing a CAPPL match is not allowed. Planning any sort of schedule to ghost is not allowed. Any ghosting or planned ghosting that is found out will result in the offending team automatically losing the week. If a team is found to have ghosted in at least 2 weeks, they will be disqualified from the tournament and the offending captain and/or players might face bans from future CAP meta tournaments. "Public Ghosting" is not allowed either and any offenders will meet immediate and harsh punishment.

-In the event of a disconnect/timeout, the offending player should show proof that the disconnect was genuine. Acceptable proof would include a photographic picture of your computer's disconnect message or blue screen or whatnot with enough external variation to assume you just didn't google the image or whatever. If the proof of the disconnect is determined to be valid and both players have submitted their teams in a spot the hosts have access to prior to their match, then the match should try to be recreated as close as humanly possible to the way it was at the point of the disconnect (this is the most preferable method-- using server leaders/admins might help in this if they are available and willing). Having neutral parties start with the original teams and giving the original players player status at the start of the match should be done if the same teams are used, since this prevents team changes from being made. In such a case, LucarioOfLegends should retrieve the teams from the team conversation if available, since a good team has them posted before each match for review anyway. If the player that disconnects does not have a valid copy of their team submitted, then that player does not have the ability to recreate the match and they will lose the matchup if their opponent wishes. In extra-ordinary situations that do not follow the above "best practices" then LucarioOfLegends will decide how to best move forward and may consult other Smogon tournament leaders as applicable.
- NEW: If you are having trouble contacting your opponent for match scheduling, contact the opposing team to help notify your opponent or get a substitution for them if necessary. There wasn't an exact ruling regarding what to do in the situation that you are unable to get into contact with your opponent to actually schedule the match, so a guideline in this case I believe is important so misunderstandings and discourse can be reduced in the future. Contacting the opposing team is also greatly important for activity rulings, so hopefully this will help players take the initiative in these cases and help make sure each match gets played during the week.
-Changed the "Friday/Saturday" to "Saturday/Sunday" in the activity section. This more seems like an archaic piece of previous rules than an actual change. The Friday/Saturday was a relic from CAPTT1, when battle deadlines were Sunday instead of Monday. This most likely equates to 48 hours before the deadline as the intention, but Saturday/Sunday make it more clear in the context of CAPPL VI, although I encourage future hosts to adapt these days of the week to whatever deadline is necessary. It really hasn't had that much of an effect since most matches have proven to happen on Saturday/Sunday, but I would rather clean this up now so it is clear going ahead.
Week 1:
Perilous Pinecos vs. Choice Band Revenankhs
Punny Privatykes vs. Surging Snaelstroms
Galactic Astrolotls vs Jumbo Jumbaos

won vs terra in 3 games. ggs

SS Bo3: Jrdn vs Terracotta - Jrdn already won this one so that's a safe pick for me.
SS1: Rabia vs Aetherl - I don't believe aetherl is a good player so I'll bold rabia. Let's see if he can prove me wrong.
SS2: 85percent vs Nalei - Not a huge fan of how Nalei played thus far and 85% is a good player (I believe).
SS3: quziel vs MrDollSteak - Quziel's very solid and I believe he can win against anyone as long as he brings solid teams (not like in a certain bo3 against stresh).
SM1: Finchinator vs Felucia - I love Felucia for a lot of reasons but not for her battling abilities. On the other hand Finch has played great so far.
SM2: SunMYSER vs Airwind - Pretty close players skill- and profile-wise. Trusting my guts here, minuscule edge.

SS Bo3: xavgb vs DetroitLolcat - Stresh is stresh and I'm still mad at dlc for haxing me.
SS1: aesf vs Heaven Jay - Oof this one is pretty tough to predict. Aesf has been very impressive until now where Jay wasn't at his peak. I'll bold aesf but I'm not that confident here.
SS2: Andyboy vs Mx - Another game where I bold the OM player over the CAP player sadly. I believe Andyboy is more likely to bring a solid team and win this one.
SS3: pinkdragontamer vs KilluaKillingIt - Killua looked quite solid in his w2 game but I trust pdt more.
SM1: Jordy vs G-Luke - Jordy's probably better skill-wise. Unless he keeps bringing sand and gets counterteamed he has an edge.
SM2: Jho vs Maple - Jho's good, upset's possible I'd say. Sorry I don't feel confident enough to give a win to the revs here.

Wow just figured I predicted a 6-0... I'll definetly be supporting the revs here because they're actual CAP players but they're gonna need to work for this one.

i want you around

won gg thanks arceus for not missing a single fire blast

Won vs Nalei, gg and thanks for putting up with my re-scheduling!

need to call act on Max since it has been a half hour and it is nearing the end of the window i told him i'd be available for. 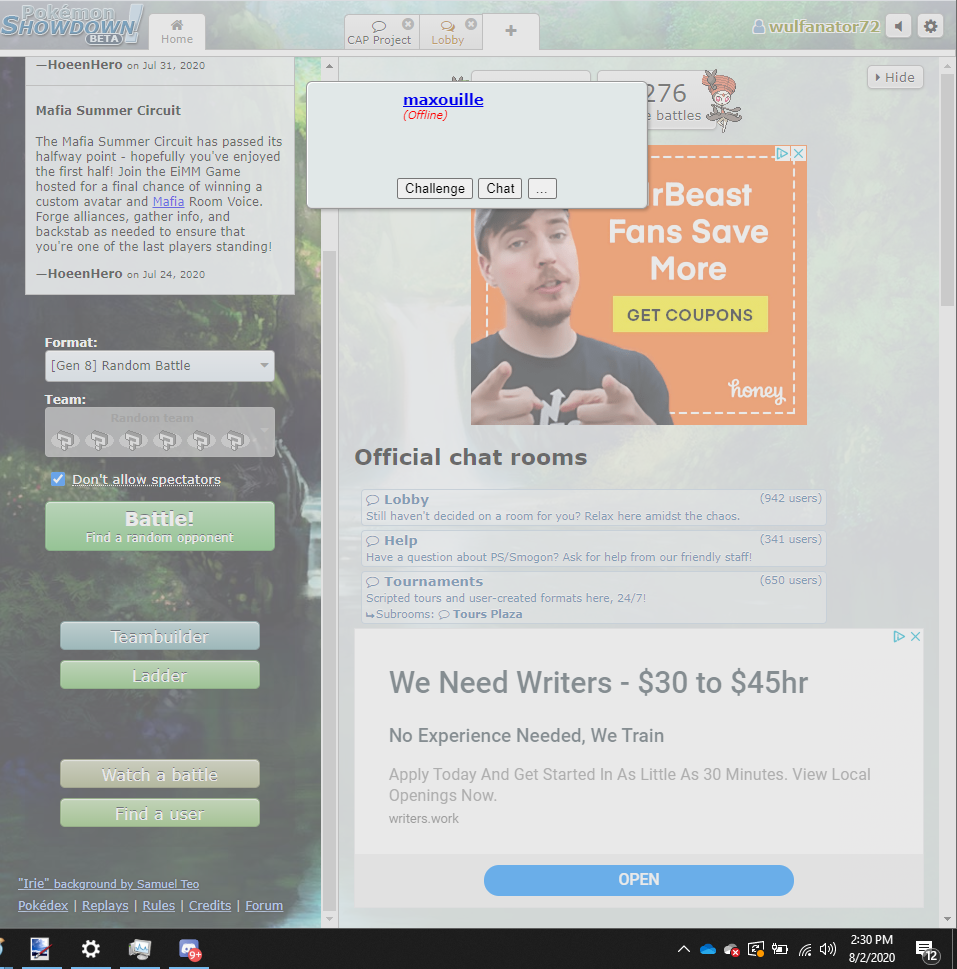 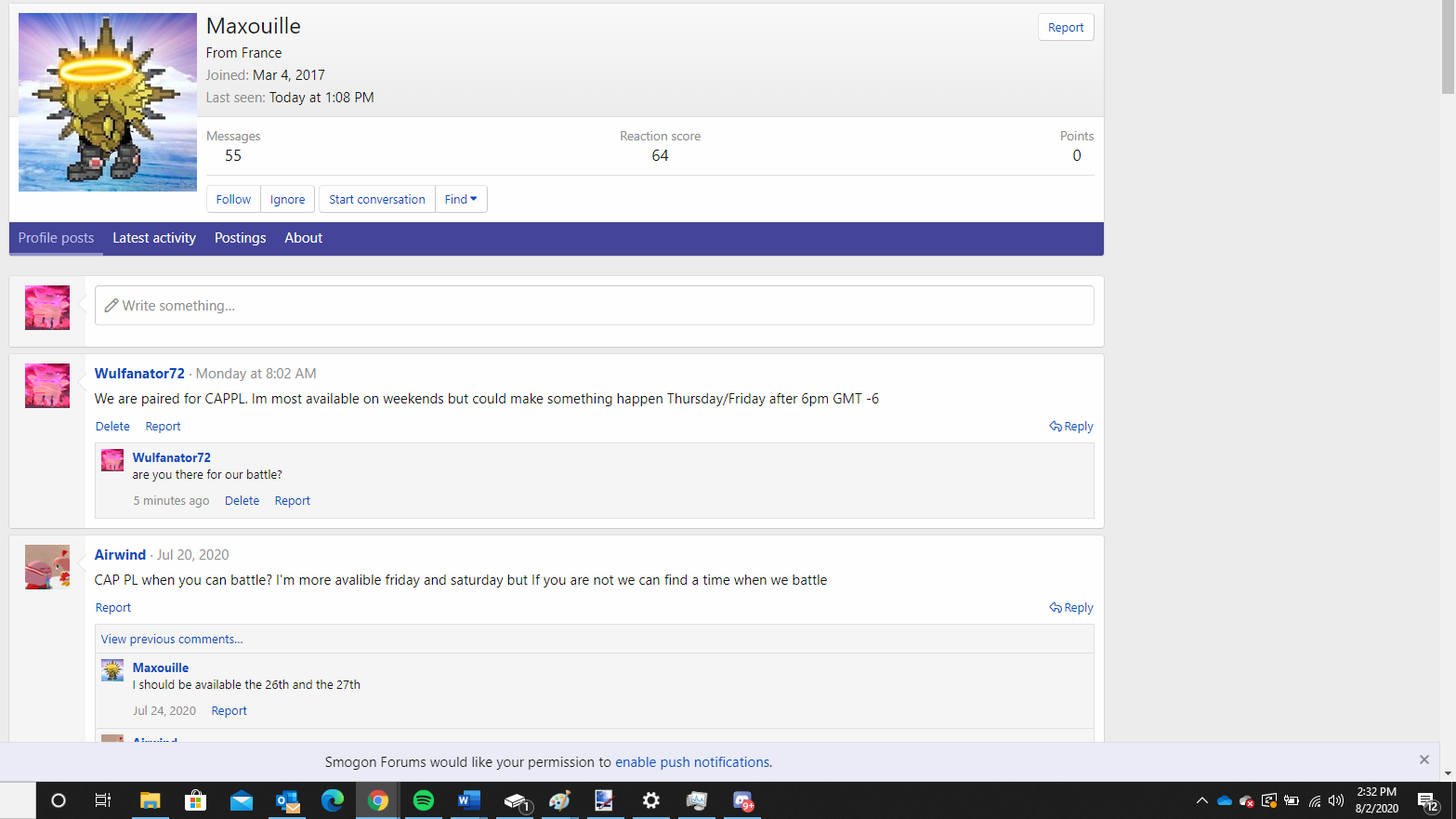 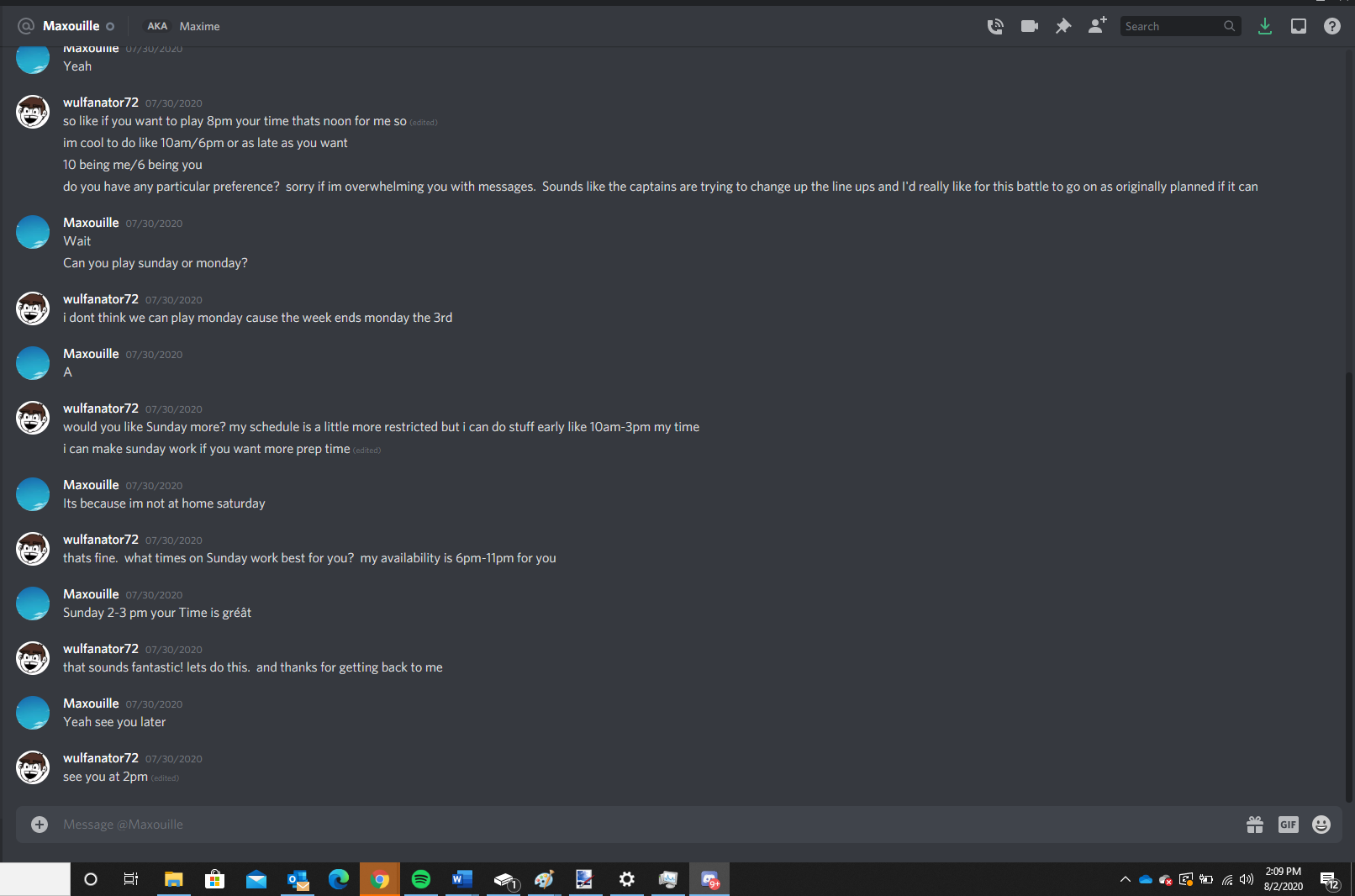 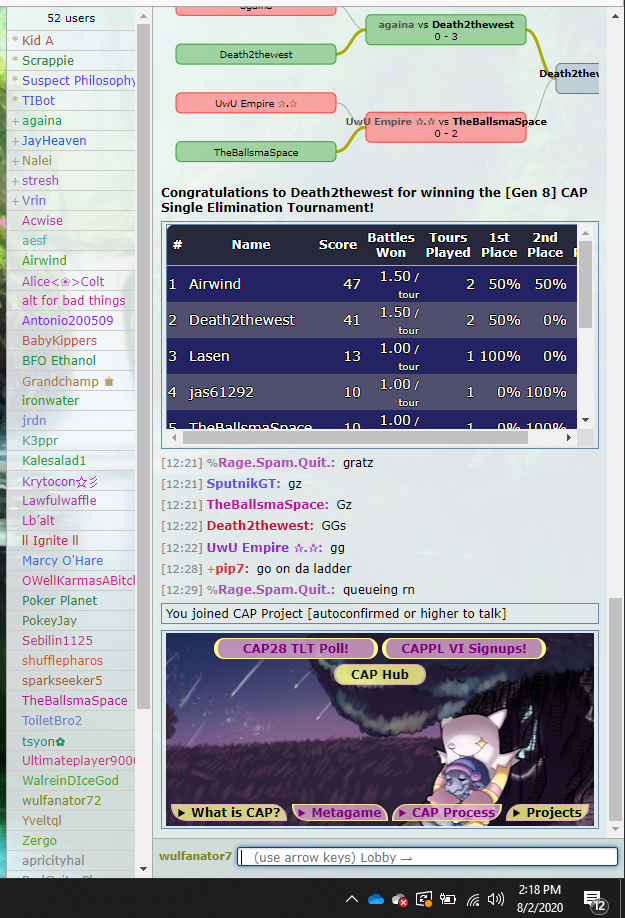 both of you are on so play the game ?