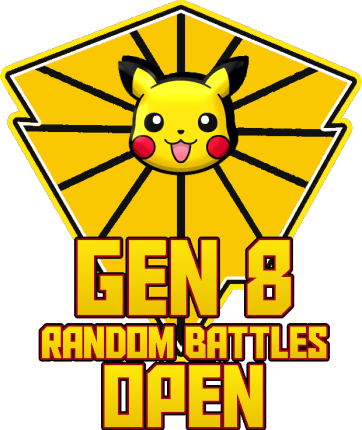 logo by Pujo based on Dybala jr's work.​
Welcome to the first ever Gen 8 Random Battles Open! This tournament is your chance to showcase your skills in the current generation of Random Battles in a Single Elimination best-of-3 series (best-of-5 in Quarterfinals onward).

1. All scheduling attempts MUST be done publicly on Smogon Walls. No other proof of communication will count for act calls regarding scheduling attempts.
2. If you participated in the Random Battles Multi-Format Open or Random Battles Classic Open and have since changed your Smogon name, LET US KNOW in your signup post.
3. You, and I cannot stress this enough, MUST post replays of your wins. Any battles without replays will need to be replayed.

We strongly recommend familiarizing yourself with the Smogon Tournament Rules and General Guidelines, if you haven’t already. If you have further questions, don’t hesitate to contact the tour hosts, lvl100blaziken and myself, here on Smogon.

Oh hi, you've made it to the bottom.

We will be taking subs until Friday July 2nd at 12 pm GMT -4, if you want to sign up as a sub, just comment down in the thread below saying "In as a sub". Not responding to your opponent by this time will risk you being subbed as well.

“In as a sub” on the round one thread

aura to the rescue again, blade can't be trusted with the simplest of things!

rose from the ashes and steered my chariot to victory in this randomized generation of pocket monsters clash.

ngl i hard team matchup'd the guy im so sorry. thank you fillygrifon for playing early and best of luck

A year in waiting

Sefat1307 said:
roman Which timezone you in?
Click to expand...

Go on your opponents profile by clicking on their name and write a message to them on their wall for scheduling (not private message). No need to do it here