Sunrose, YoBuddy, and I are joining as The Hydro Homies. 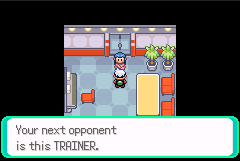 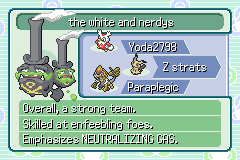 With the timing of this tour, the ones who will get the most mileage out of their signup posts are those who will most efficiently adapt to and engineer the new metagame. On that note, the white and nerdys are a promising combination helmed by strong SS player Paraplegic. Known far and wide for his unprecedented, cruel abuse of Weezing right out of the gates of gen 8, he is a player who can undoubtedly adapt to the new Isle of Armor metagame with ease. Looking at the rest of the team, we see longtime doubles titan Yoda2798 running in. Steam hissing off his body, he crushes the stadium floor beneath his feet proceeding his victory against the legendary emforbes in DPL. In the last slot, we have Z Strats. Still riding the high of his immense Drop An Uber Tour victory, it seems like he's looking for more tours to add to his collection. 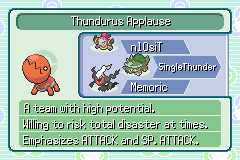 While not having as many tier leaders as Two Ms and a Tree, Thundurus Applause's own Memoric pressures the bracket with his unabated doubles prowess. With a seasonal and a DPL under his belt, we shall see how he fares in the hallowed grounds of the girafarig if instead of a line it split off in a triangular formation cup two. n10siT is another strong contender, known mostly for his work bringing a semblance of order to the otherwise chaotic Doubles UU. His quick thinking and smarts which lead into his ability to excavate and cultivate an unexplored metagame should prove valuable in this tournament. SingleThunder beat me in a game once.


That's all for now! Signups are still open! I'll see you later for Round One!

Team I have no idea what I am doing or what this metagame is
Members :
Bread Sandwich
Kaitlyn
Shivam3299 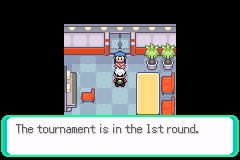 the white and nerdys vs The Hydro Homies

Paraplegic vs Sunrose
Yoda2798 vs KennyJ
Z strats vs YoBuddy

n1n1 vs LLiama
Homosexual Mother vs sawamura
Hashtag vs Mishimono 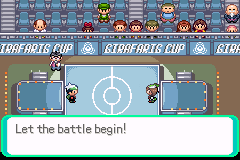 Just so I don't make any mistakes, could you explain exactly how we're supposed to go about challenging our opponents?

AceTycoon said:
Just so I don't make any mistakes, could you explain exactly how we're supposed to go about challenging our opponents?
Click to expand...

Are we allowed to change teams, or is it one team for the whole tourney?

When xzern writes a sentence about you

DukeOfKings said:
Are we allowed to change teams, or is it one team for the whole tourney?
Click to expand...

You can change teams for each round

2-1 game in my favor. I forgot to save the replay of our first game, but he should have it

https://replay.pokemonshowdown.com/gen8doublesou-1139708825
This was the first game

EDIT
We made a timezone mistake and are in the process of rescheduling
Last edited: Jun 26, 2020

Won vs Mizu in 3 ggs

monkey is strongth and im bad at ss ggs