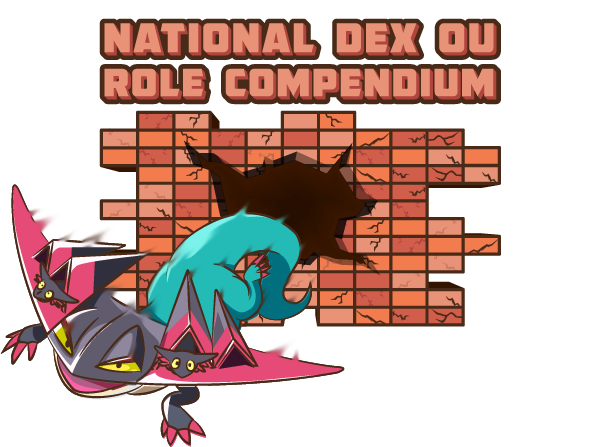 Art by Blazenix​
The purpose of this thread is to provide a visual list organized by roles to see what Pokémon do what. This will help new and experienced players alike in finding Pokémon that fit their teams when looking for specific roles. Each Pokemon that is here is viable in the OU metagame, and as such, it will change as the viability rankings get updated. If you feel there is a Pokemon viable for the roles mentioned below and it hasn't been added to the group, then recommend it in your post with solid explanations. The order of roles will be organized in the following way:
Note that Pokemon listed to the right of a | are considered niche options in that given role, or niche options in general.
1. Utility

(Note that Sun is considered a niche playstyle, and therefore all of its setters and abusers are considered niche options)
Trick Room:
Setters:

(note that Trick Room is considered a niche playstyle, and therefore all of its setters and abusers are considered niche options)

Please remain civil and provide valid reasoning when nomming to include / remove a pokemon from the list. Happy posting!

Genesect should be added to Shift Gear section. Although the set is a little bit nicher than a lot of its other sets. It can sweep late game under the right conditions.

Mega Metagross should be added as a Pursuit trapper and Dracovish as a TR abuser. Good job otherwise!

Great overall, I'd put Blacephalon as a Beast Boost user (and Choice Scarfer honestly its a great cleaner in the metagame) and Victini as a Sun Abuser but this looks great overall.

Just saying, if you're going to put Beast Boost and Soul-Heart together, you should also include Moxie.

First thing is first, good job on taking the time to compile the list. And also to everyone who contributed.

While it may not be the best in this role I believe ZardX should be included as a Dragon dancer, also as a defogger on fatter teams.

Porygon2 in the trick room section as its bulk, and unique typing amongst trick room setters provides ample of opportunities. And it has great support options in the form of magic coat. Phys defensive variants may pray upon hammer arm less Mega-Meta. It can discourages some physical threats w/ foul play, like the aforementioned metagross. Lures in Heatran with hp Ground. May successfully trap and remove zone, and duggy w/ trace. Or if invested in special defenses it could take on Ash-Greninja. The point I am making is that it's last two moveslots, role in the team, as well as stats, are customisable depending on the needs of your team.

Also I notice that there's a section specifically for kommo-o - can we re-name that to Omni boosts, so that we can include Porygon-Z. I get that it struggles to find set up opportunities, and is overly reliant on alot support, however once DMax receives the boot; this set will become a bit more viable.

My last nom is perhaps the most controversial. Especially, considering how much this Mon is outclassed in almost every role. However, I believe there a glimmer of hope for Mega-Altaria as a defogger.

How about Stakataka as a TR setter and abuser? He snowballs well and hits hard

Bisharp should be added as a Pursuit trapper

Btw there should be a Stallbreaker section. Going against Stall without one is a death sentence basically.

Moderator
Arena Trap should be removed and Dugtrio removed from Pursuit and Stealth Rock because of the Arena Trap ban.

edit: and Sucker Punch. Remove Duggy from there too. Duggy suck now.

Kind of nitpicky but I think all the mons listed that are unranked on the VR should be removed because I believe this Resource should only include the mons that are consider viable. This is how gen 7 did it and I think it works the best because it gives new players a glimpse of the entire metagame and not outclassed things like Drednaw and Polteageist.

Charizard gets Belly Drum this gen as an egg move, so MegaZard-X should be added to the Belly Drum users

The moves Magic Coat and Taunt should be part of Hazard Control.
Araquanid is a great user of Magic Coat, and tons of Pokemon use Taunt.

Also I know you gonna remove Genesect but theres still some unranks in here I'll point them out for you.

Also I would just nuke the Trick Room section since all of its setters bar Magearna are unranked.
Last edited: Feb 24, 2020

Btw there should be a Stallbreaker section. Going against Stall without one is a death sentence basically.
Click to expand...

Heyy, I don't understand, what do you mean about ''Hp ground used'' in a Ditto? Can you explain to me? Thank you

CHORUME said:
Heyy, I don't understand, what do you mean about ''Hp ground used'' in a Ditto? Can you explain to me? Thank you
Click to expand...

Ohhh sure, awesome! Thank you!
And what IV's set I have to put? Have some order?

CHORUME said:
Ohhh sure, awesome! Thank you!
And what IV's set I have to put? Have some order?

Volcarona should be added to the Setup Sweepers section (Quiver Dance)

Bobsican said:
Volcarona should be added to the Setup Sweepers section (Quiver Dance)
Click to expand...

Seconding this because little info is provided, but Volcarona is 20th in usage in 1760+ at 9.41%. Boots make it much more pasteable on a team as it can easily setup without rocks as a deterrent. A Quiver now keeps it out of range of scald from bulkier pokemon whereas with rocks damage it otherwise would not.

Sorry for double post but i went through the entire set compendium and updated it. Plz let me know if i missed anything ( i removed all UR mons)
in addition i removed all mention of mons that technically have the move but don't use it ( for example, greninja using toxic spikes or hydreigon using defog)
I tried to be conservative as possible but there were some that technically could be useful but simply have no usage atm like chansey using healing wish which is technically something worth looking into but it has seen very little usage and probably for good reason. There was some I wasn't completely sure so i left it there ( for example dracozolt under choice band I wasn't sure or not whether it utilized band or not though i was relatively sure its viable set was sub + drag z ). Finally, sorry for the format for added mons i couldn't make it match with the size of other mons.
(plz let me know if its not allowed to do this as well)

as a final thing, plz let me know if it not allowed to do something like this and if it is plz let if i missed anything
You must log in or register to reply here.
Share:
Reddit Pinterest Tumblr WhatsApp Email Link