Moderator
The damage calculator says that in Gen 2, Hydro Pump from a level 50 Starmie is a guranteed OHKO against a full health level 50 Marowak, displaying the roll like this: Starmie Hydro Pump vs. Marowak: 158-186 (95.1 - 112%) -- guaranteed OHKO
Interestingly enough, if you take off Hidden Power from Marowak (which only adjusted the attack and physical defense DVs), it shows more accurate odds: Starmie Hydro Pump vs. Marowak: 158-186 (95.1 - 112%) -- 71.8% chance to OHKO 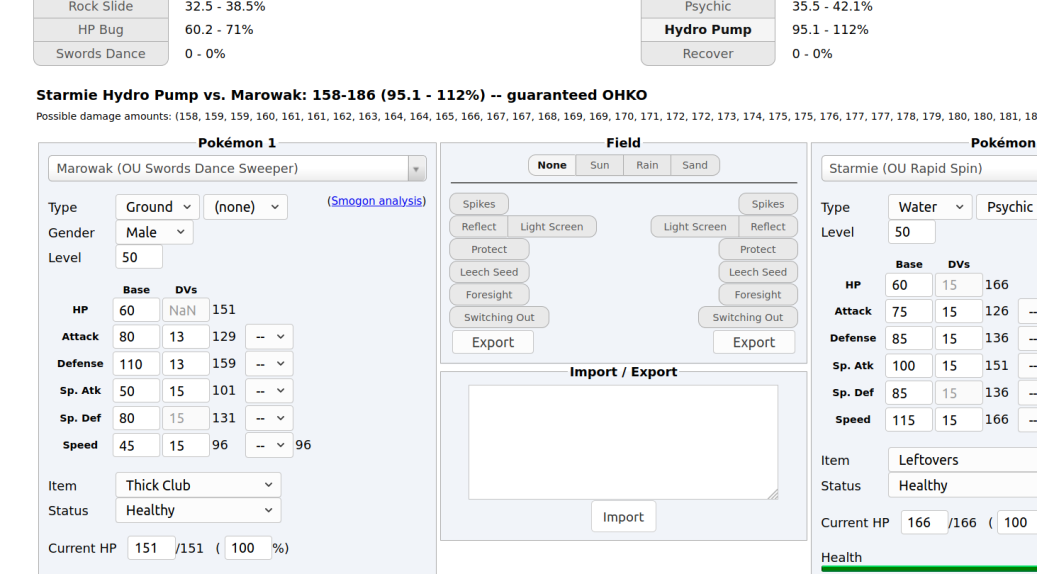 FriendOfMrGolem120 said:
The damage calculator says that in Gen 2, Hydro Pump from a level 50 Starmie is a guranteed OHKO against a full health level 50 Marowak, displaying the roll like this: Starmie Hydro Pump vs. Marowak: 158-186 (95.1 - 112%) -- guaranteed OHKO
Interestingly enough, if you take off Hidden Power from Marowak (which only adjusted the attack and physical defense DVs), it shows more accurate odds: Starmie Hydro Pump vs. Marowak: 158-186 (95.1 - 112%) -- 71.8% chance to OHKO

I noticed this with other calcs as well, though I don't recall which ones. I may provide examples in the future of the percentage of KO threshold misrepresenting the amount of a pokemon's health a certain attack depletes

Moderator
You may have given a reason for why the calculator does this instead of calculating correctly in the past that I can't find, in which case I apologise, but the way multi-hit moves interact with Multiscale/Shadow Shield on the calculator is currently incorrect. This was reported twice in 2019, first by DaWoblefet in July as part of a big Parental Bond fix and then later by DrPumpkinz in November in relation to Icicle Spear in a report that appears to have been buried. I also checked the old thread in IS and there wasn't anything about it in there.

I was doing some calcs of Double Iron Bash vs Multiscale Dragonite and thought the numbers looked wrong, so I checked each hit independently using a modified Iron Head and it was doing what I thought: if the Pokémon's HP is at 100%, Multiscale/Shadow Shield will weaken both hits of the move instead of only weakening the first, resulting in an output which is 3/5 of the correct value:

After checking this, I checked a few other multi-hit moves and got the following results:

As you can see, while this was corrected on Parental Bond following DaWob's bug report, no other multi-hit moves that I tested work correctly, resulting in large inaccuracies with the damage outputs. Especially considering that both Melmetal and Dragonite currently reside in the same tier, this issue needs fixing with regards to both the Multiscale interaction and how Triple Axel and Triple Kick have their damage calculated. I haven't tested any other generations, but I'm going to presume that the code was ported forward and that the bug, therefore, persists backwards.

Also, while I'm still thinking about it, it'd be nice if, after fixing Triple Axel/Triple Kick, you could to add the option to check how much damage they would do if they only hit once or twice, as each hit has that trolly independent accuracy check that cancels any subsequent attacks when it fails.
Last edited: Feb 18, 2021

The damage calculator completely ignores metronomes. (yes I did click the dropdown menu under each move)

sumwun said:
The damage calculator completely ignores metronomes. (yes I did click the dropdown menu under each move)
Click to expand...

It works fine for me, damage seems accurate as well so idk

Colteor said:
View attachment 317360
It works fine for me, damage seems accurate as well so idk
Click to expand...

Maybe this is a problem only in old generations. I found the bug when I was using the gen 4 calculator.

sumwun said:
Maybe this is a problem only in old generations. I found the bug when I was using the gen 4 calculator.
Click to expand...

yeah that's it, tried it myself and the damage didn't change at all, works in every other gen. Probably related to how it's a smaller damage modifier in gen 4 than every other gen. (I believe 10% boost per attack in gen 4 and 20% in the rest)

It's not a bug from Showdown! exactly, more like a bug I discovered onto the damage calculator, about the Utility Umbrella mechanics. It's supposed to ignore effects from rain/sun, especially damage boosts/nerfs, and that's where it's broken : the calculator don't count it. Playing Ubers, rain is especially important and an important calc is broken so :

The calculator behaves incorrectly for some pokemon with damage-boosting abilities (e.g. Iron Fist, Adaptability). It seems to be that if the pokemon has an ability like this in its first slot, the calculator will apply that ability if "(other)" is selected (including from selecting a blank set). See screenshots: 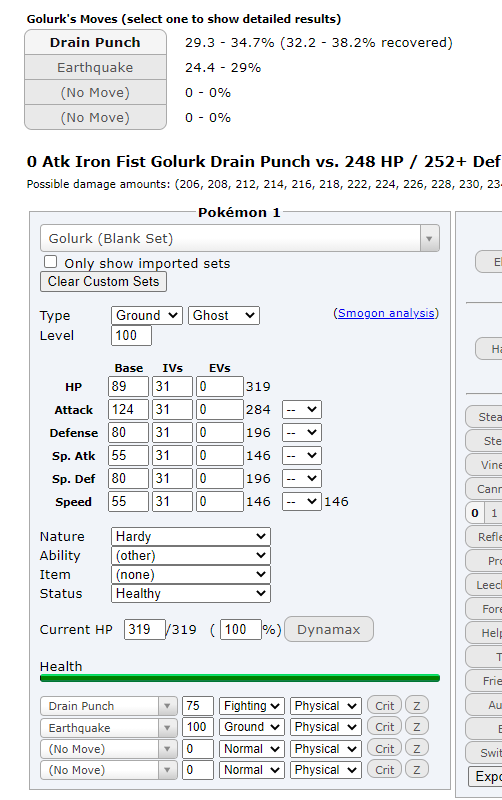 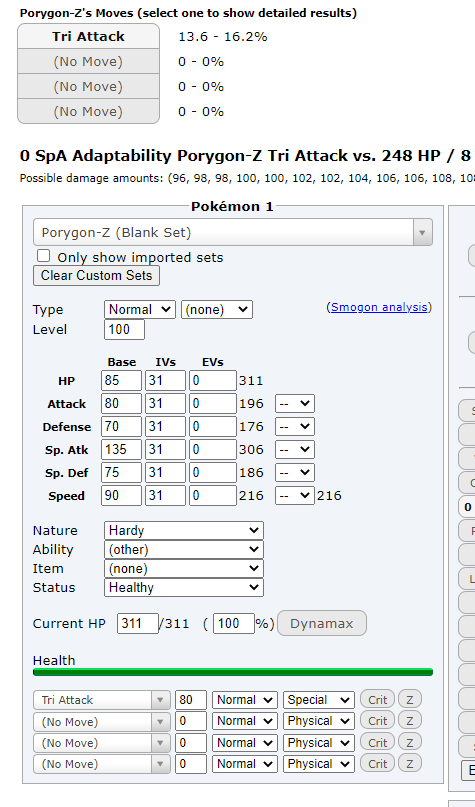 sons of a battlecry

Moderator
any chance you could add a feature to add a turn of Protect as an option to accumulate extra Leftovers / Black Sludge / Poison Heal recovery? for example it may have a 10% chance to 2HKO but if you Protect in the middle it would drop to 0

Moderator
idk if this is the place for randbats as well, but please add aegi-shielf form to the calc

A button in damage calc to deactivate all special conditions. Instead of unselecting rain+light screen+2 spikes etc, just a button to put all of those back to default. I suggest including dynamax, crits, z moves, and the number of hits for multi hit moves in this as well.

There doesn't appear to be any info regarding the interaction with MG on the Showdown/Smogon dexes, but MG users seem to be immune in battles on Showdown and Bulbapedia says that it is ignored by Magic Guard, so I figure it's just an unintended omission.

To check whether this was just a bug that arises when removing the ability, I manually edited Cobalion's stats to match those of Zamazenta-C and had the two use Close Combat on each other and non-DS Zama-C had the same damage calc as Cobalion:

I then checked against a blank set Zama-C and it appears the +1 is still said "vs +1 Zamazenta-Crowned" even when Dauntless Shield wasn't on it in the first place:

I tried going to Aboma and then back to Zama in case it was just a bug going from one Zac set to another and it persisted.

I then removed Dauntless Shield from the Cobalion and checked the Zama CC calc again. The +1 vanished from the text but the damage stayed the same:

I then manually applied +1 Def and the damage decreased as expected:

Finally, I checked regular Zamazenta and, like Zama-C, the +1 text without any real boost was automatically applied regardless of whether it had Dauntless Shield or not.

TL;DR:
I've not done a comparison with a fake Zacian/Zacian-C for Intreped Sword, but I assume it's been implemented in the same way considering the same text bug appears for both Zacs regardless of whether they have Intreped Sword or not. The damage seems to work correctly for these though.
Last edited: Mar 6, 2021

Multiscale and Shadow Shield currently do not reduce damage if the "Stealth Rock" button is selected, even if Heavy Duty Boots are worn. The same is true for Spikes, provided the pokemon in question is not immune to them (i.e. not a Flying-type).
On a side note could these abilities get a checkbox like Intimidate has?

The Calculator doesn't seem to take into account the effects of the Utility Umbrella, and how it both negates sun/rain boosted moves against the holder and makes Weather Ball a 50bp normal move against the holder.

On a similar note, a dynamaxed weather ball is supposed to turn into a max move of the corresponding weather type, however it stays as max strike on dynamaxed pokemon.

Request, is it possible to add to the all vs one and one vs all calc a way to calculate only custom sets? to make it easier to calc for formats like BSS factory, 1v1, and OM?

Forgive me if I'm not using the exactly correct technical terms here:

For the random battles damage calculator, the calculator will not work over certain connections. This is because it appears some content is not served entirely via https, and certain connections/VPNs (including the one I use) block requests that don't use https. You can see a screenshot attached from the Chrome developer console demonstrating with the issue.

I'm aware there are ways to get around this issue on my end, but they are fairly inconvenient, and was hoping if this isn't too difficult of a fix that something could be done here. Thanks.

Can someone verify whether the halving nature of strong winds is calculated before or after wonder guard? I have the feeling that it is before, considering that this custom game (where corviknight had both a wacan berry and wonder guard) did not get affected by thunderbolt under strong winds, but the damage calc says otherwise. This is because the damage calc currently puts the strong winds check after the wonder guard check. 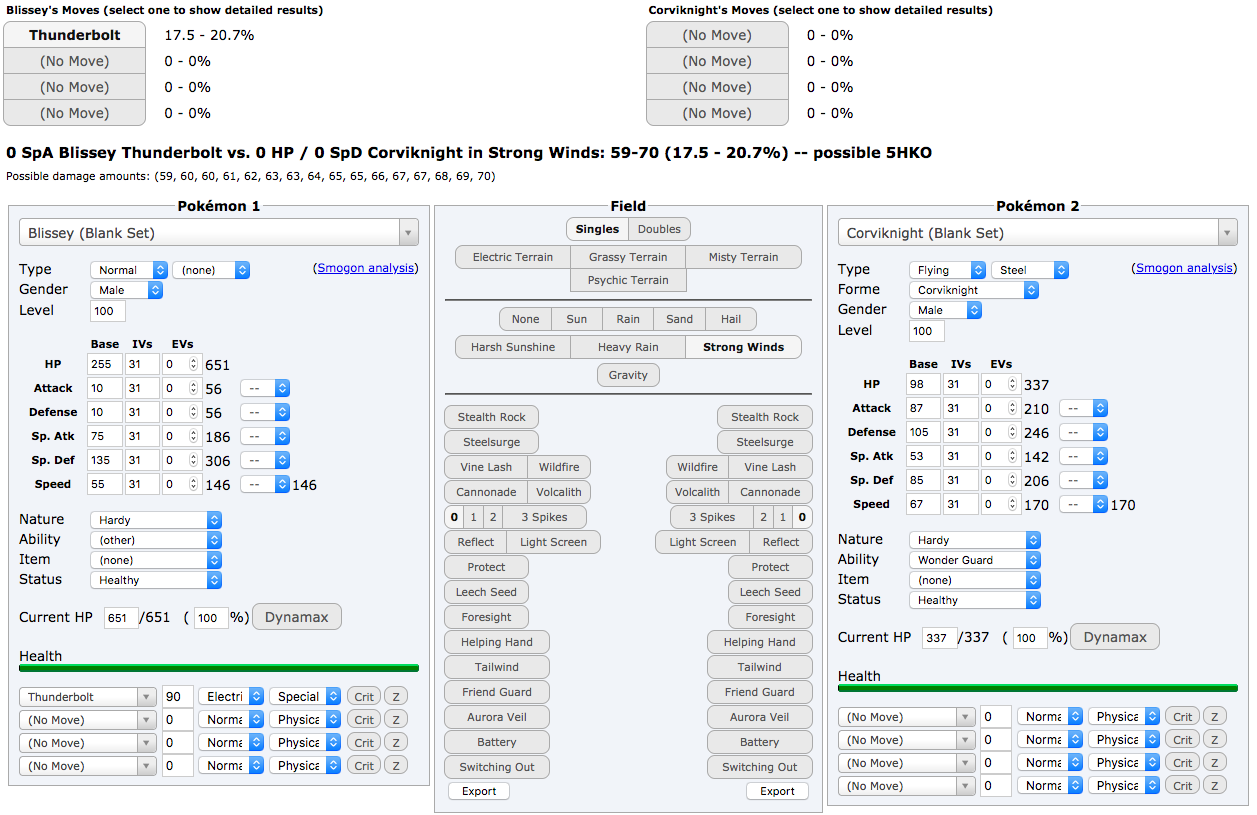 I patched this a few months ago, but it looks like the site hasn't updated its code in a while.

Hello, I'd like to ask if there are any guidelines for pull requests. I could implement some of the features on this issue page, but am not sure about the submission process.

Normalize is making Struggle act like a Normal move when it probably shouldn't.

While having a discussion in the BS room i decided to go check some Rivalry calcs and it looks they're bugged this gen? Whereas they look right in XY. (didn't check SM) 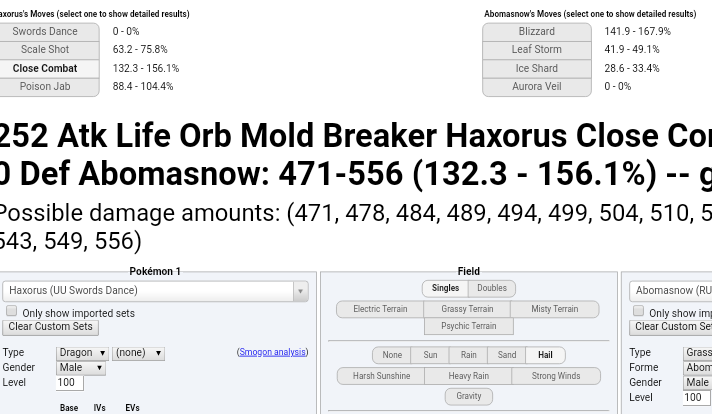 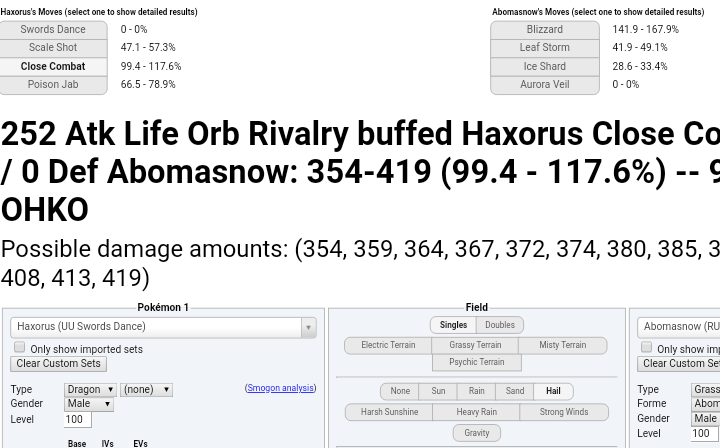 hey, is it possible to add "+1 all Stats" feature in gen 8 calc? it is useful when one is playing NatDex and makes calc easier

it is a thing in SM calc: