Zaphybi said:
Silver Powder appears not to be working (not boosting bug type moves). I tested this on heracross, yanma and yanmega in gens 3, 4, and 8; none seem to be working.
Click to expand...

Looking at the code on GitHub (I hope I have the right to do so '_'), this has been fixed but maybe they are waiting to fix more things before pushing it to the live version

Dauntless Shield doesn't affect damage at all in the calculator
Last edited: Dec 12, 2020

Triple Kick isn't getting calc'd properly with Technician. This is against a Corviknight, so the attacks are neutral.
Triple Kick and Thundurus Kick should deal the same damage if I'm not mistaken.

GrandSmasher said:
Triple Kick isn't getting calc'd properly with Technician. This is against a Corviknight, so the attacks are neutral.
Triple Kick and Thundurus Kick should deal the same damage if I'm not mistaken.

The problem is not about Triple Kick + Technician, it's just Triple Kick alone.
It seems to be computed like a move that does 3 hits where each hit uses the input base power (which defaults to 10).
So by default, it's similar to a 30bp move.
On the other hand, its counterpart Triple Axel seems to be hard coded as a 40bp move so it's computed like a move that does 3 hits of 40bp each.
So neither move is really computed exactly like it should.
To mimic Triple Axel, Triple Kick should have a hardcoded base power of 20 though. 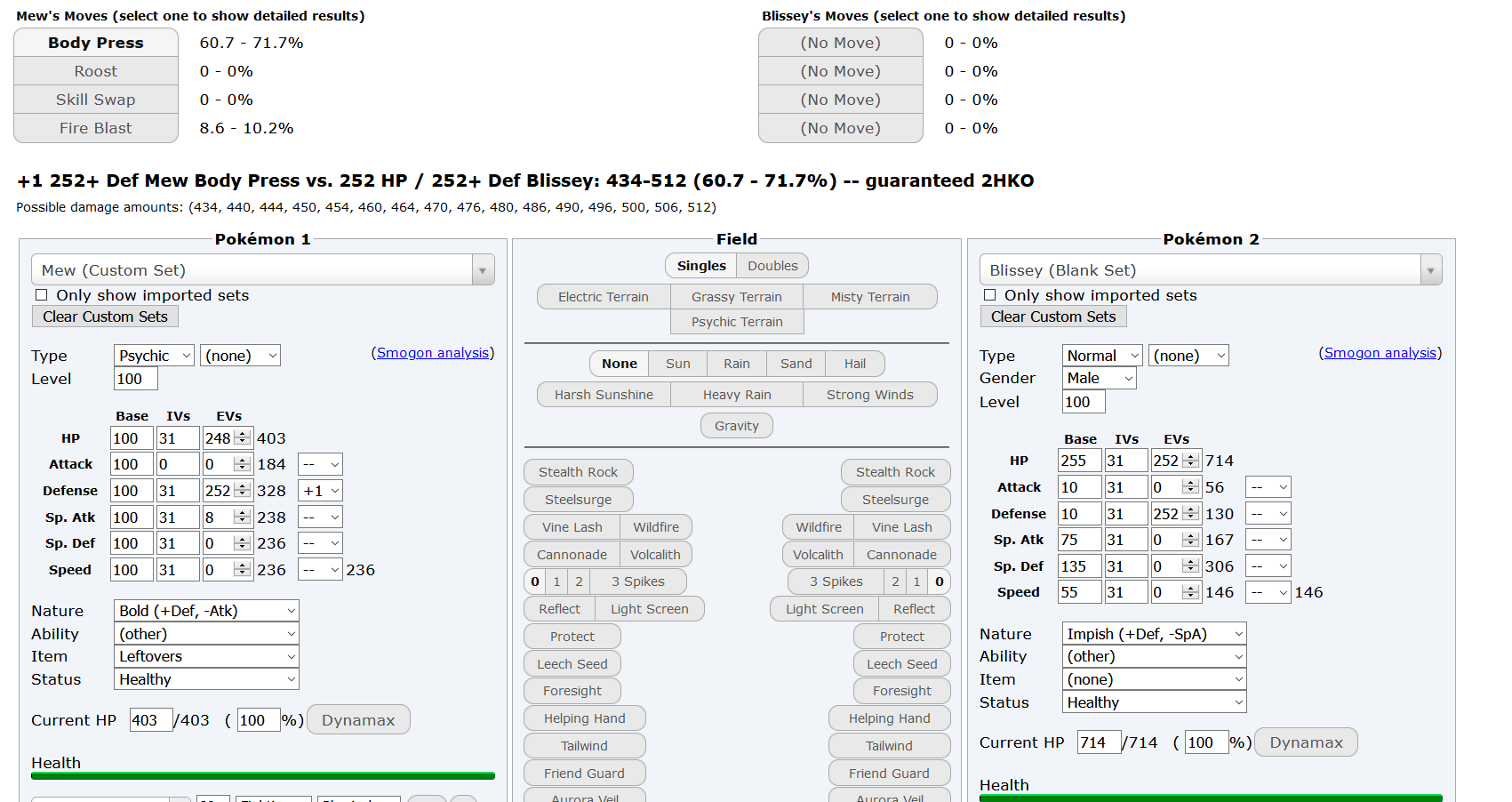 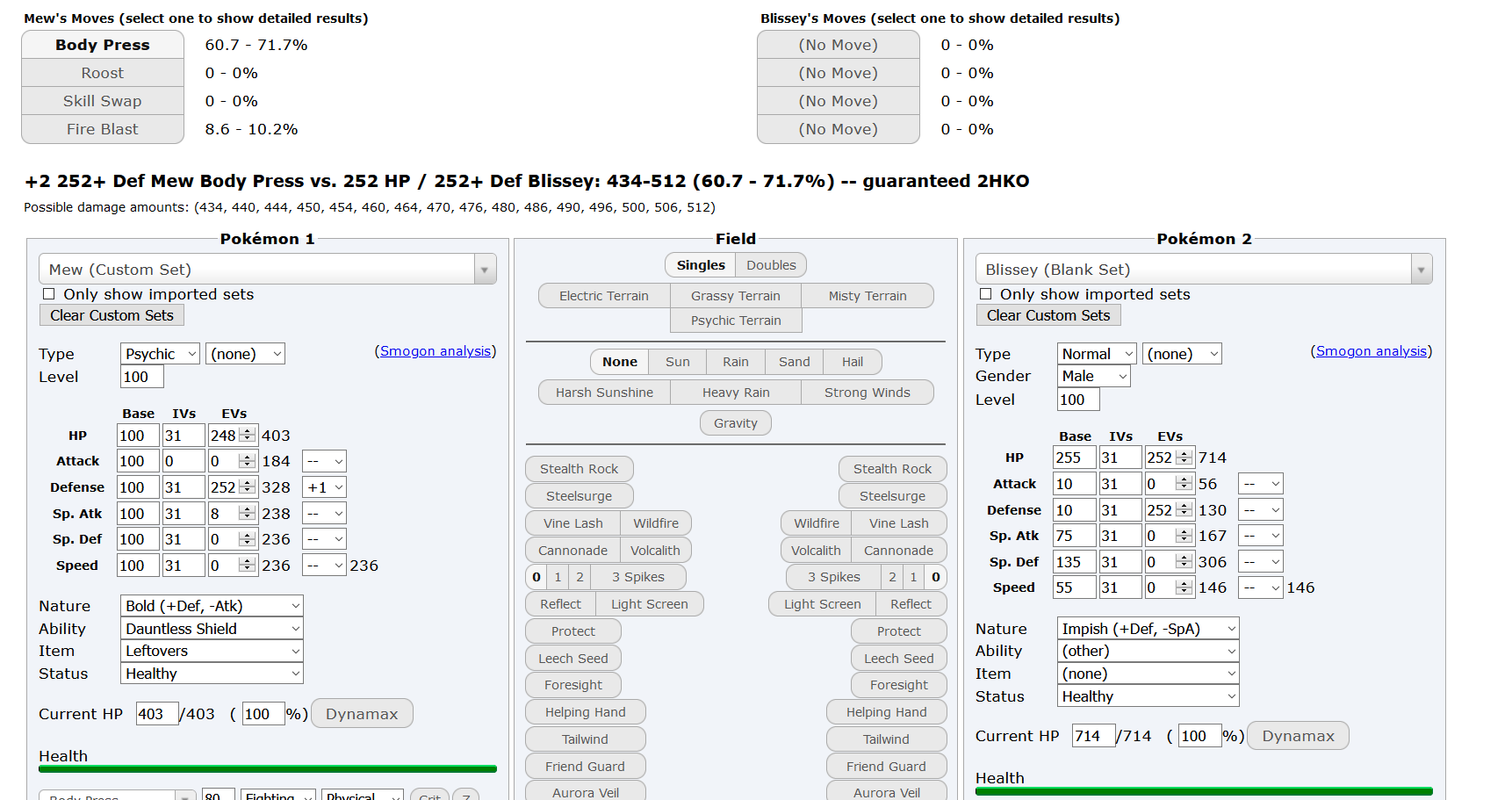 I don't know if this has been brought up before, but IMO its slightly inconvenient that the four default moves for the calc can include status moves.
AFAIK the sets are ripped from analyses, but when you're calcing, status moves don't do anything. For example, the doubles Diancie set is

Code:
Time entering moves could potentially be saved if it was instead

Code:
Its not a big deal, but it could really matter in a time sensitive game. Another big thing is that scrolling through the list of moves is extremely painful on mobile.

My proposed solution is to allow all new analyses written to include a 'four most common offensive moves' set specifically used for the calc and update older analyses to include it. This will be hidden on the analysis page, just directly submitted to the calc. This is the best solution, but it could be unfeasible to update all existing sets. An automatic solution is to include 2 slashed (alternate) moves over status moves where possible (executed by whatever program in charge of ripping the analyses sets for use in the calculator). This doesn't seem too difficult to implement in my head.
Last edited: Jan 5, 2021 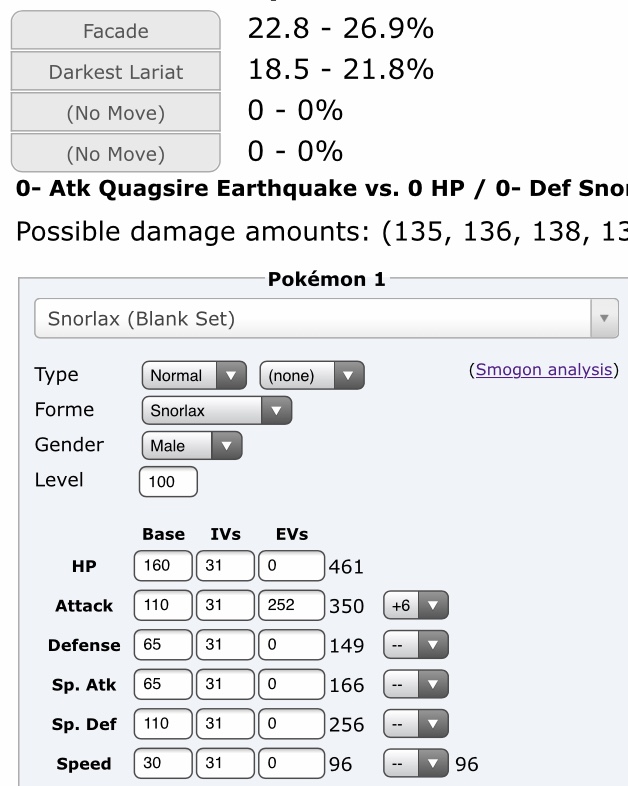 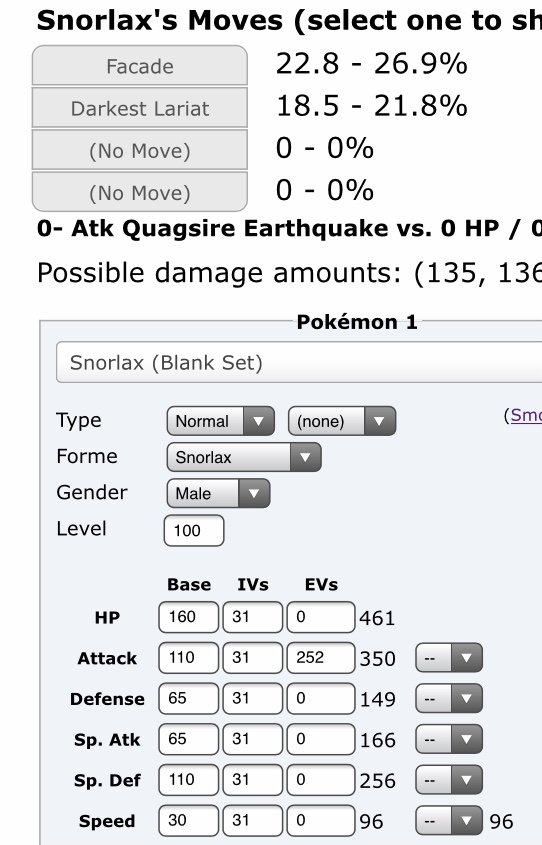 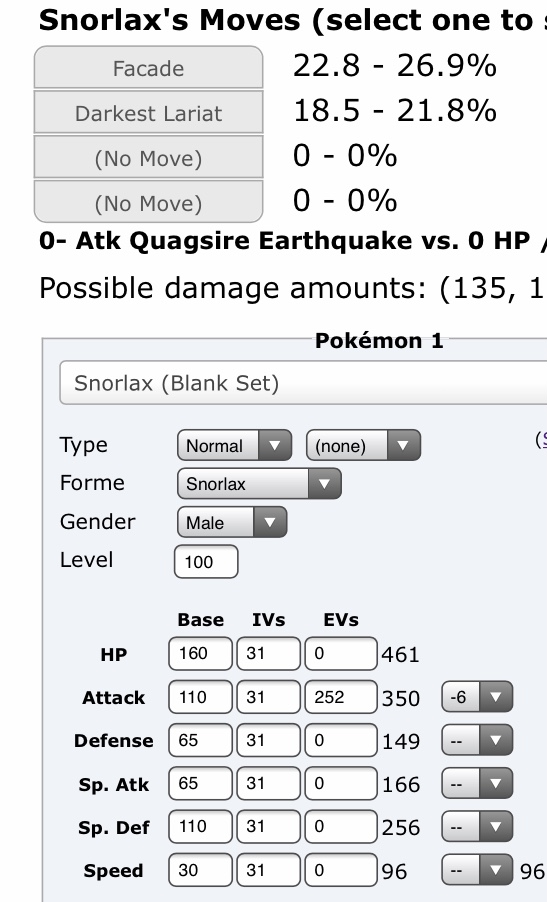 Quagsire has the Unaware ability, which means it ignores the opponent's stat changes.

I'm new to the forums but have been using the calculator for a few weeks now in my personal offline gaming challenge runs.

I'm not very knowledgeable in Pokémon calculations and mechanics but I noticed a few minor UI bugs that I could fix, so I've registered a few issues on the GitHub page and also created the pull requests with the fixes for them.

Hopefully, you guys can review the changes and approve them if they don't interfere with anything else. 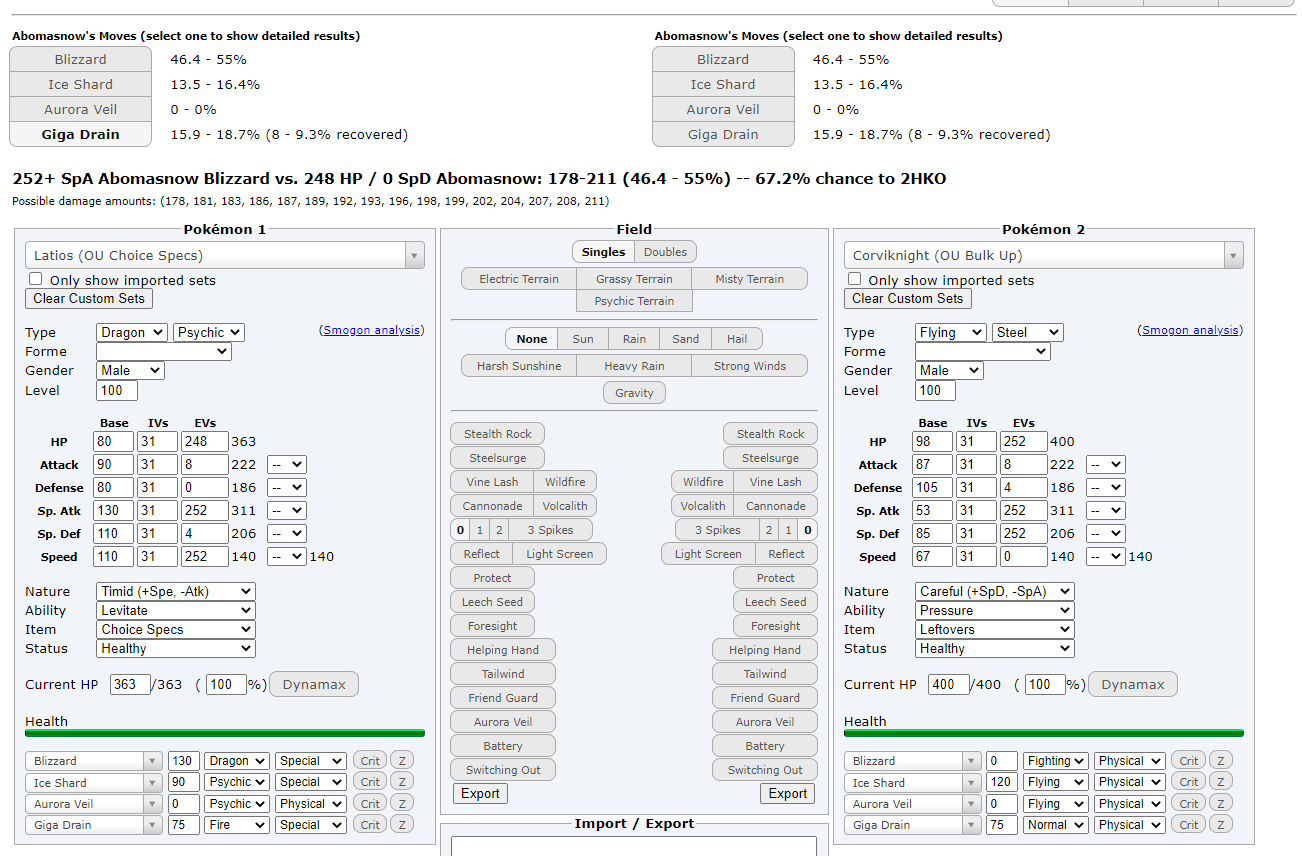 Hello!
I've noticed that reflect prevents a different amount of damage in singles than in doubles.

penguiturtle said:
Hello!
I've noticed that reflect prevents a different amount of damage in singles than in doubles.
Click to expand...

That is the intended behavior. From Bulbapedia:

Instead of doubling the Defense of affected Pokémon, Reflect now technically halves the damage done to them by physical moves; it still does not reduce damage done by moves that deal direct damage.

If multiple Pokémon are present on the user's side of the field, all of them are protected by Reflect, but physical damage is only reduced by a third rather than half.
Click to expand...

D'oh... I looked and couldn't find that info. Looks like I need to take another spin at Smogon University :)

wait what
am i mising a joke what is Sp. Computing

edit: alright i come back and now its Sp Atk. again

I noticed that Rivalry doesn't seem to calculate properly. According to Bulbapedia's description:

However, when input with Rivalry, it doesn't seem to calculate properly. Rather, it says same-gender is weaker than opposite genders. This doesn't seem like intended behavior. Screenies below.