Semi-serious post about DA ROCK himself (no, NOT Dwayne Johnson)! 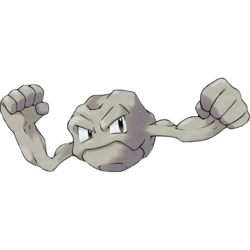 See this Pokemon? He's named GEODUDE, and you will remember his name. It should be in S tier! This thing trivializes so much of the game it's not even funny.

Going off memory, he cleanly deals with the first three gyms fine. Rock Throw missing and Roost can be annoying, but it's minimal as Pidgeotto does like nothing to you (watch out from Sand-Attack from Pidgey tho, might need to use a starter for that). This is huge for the 'dude (or gal), as only Cyndaquil can boast comparable credentials with the early leaders (Onix is SCREECH CITY).

Next is Bugsy, where Scyther crumples from a swift glare from Geodude (if he doesn't U-Turn out). Geodude is also a fantastic counter to Whitney if you don't mind getting a female (not hard at all, 50/50 gender ratio). You can either wear her down gradually or just Selfdestruct to nuke the cow all over the Goldenrod Gym walls in udder destructiuon (might not OHKO but it will definitely hurt due to Gen 4 booms halving Defense).

Morty and Chuck are a little shaky, though you should definitely have Golem around this time, whose superior stats stomp pretty much all mooks easily. You can maybe take some of Morty out with Rollout, and you MIGHT be able to take Chuck's Primeape if you can 360 no scope past Double Team trolliness. You completely laugh at Jasmine as you eat her CLANG Pokemon for breakfast. At level 33 (or level 29 if you hold off Geodude from evolving 4 levels, which could be feasible considering just how weak Team Rocket HQ is) you get Earthquake. Now you have dat sexy 110 base Attack Earthquake which is amazing!

Pryce is annoying for Golem, but Earthquake should definitely sting, and luckily his mons do NOT have Water moves. Golem should at least dent Seel and Dewgong very well at the worst (insert GONG! cries from The First Movie here). Granted, you might not have Earthquake now if you go ahead and evolve at 25 (and because this list advises doing Pryce first) but Rollout could still maybe make some decent progress if you could pick off Seel at low health (watch out for Icy Wind - not a COOL PARTEH as Arnold Schwarzenegger would say).

Clair is annoying for Golem, but you can still roflstomp Dragonair with Earthquake (watch out for the one with Aqua Tail, unfortunately both are female so you can't quite tell easily). Also, Gyarados doesn't have a Water move, so if you soak the Intimidate elsewhere Golem could maybe do some work on it. The Kimono Girls lean average, but you can easily take Jolteon and Flareon (you know, the one who sucks in most games)

Now for the Elite 4, and here's where it gets fun. Rock Polish is pretty useful on some of the fights. You can probably pick off an Xatu or two on Will, and Koga is just fodder for Golem as long as you cross your fingers, place your hands on your Lucky Charms cereal that is magically delicious and get through his evasion chicanery of cheapness: 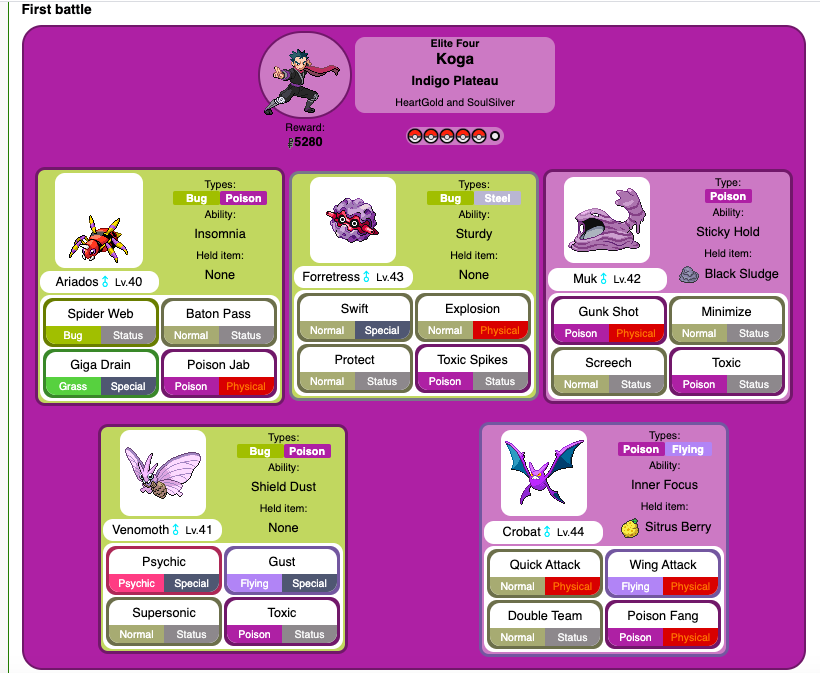 Above: cancer (also watch out for Ariados Giga Drain rofl)

Next is Bruno, which might SEEM bad until you check his team. 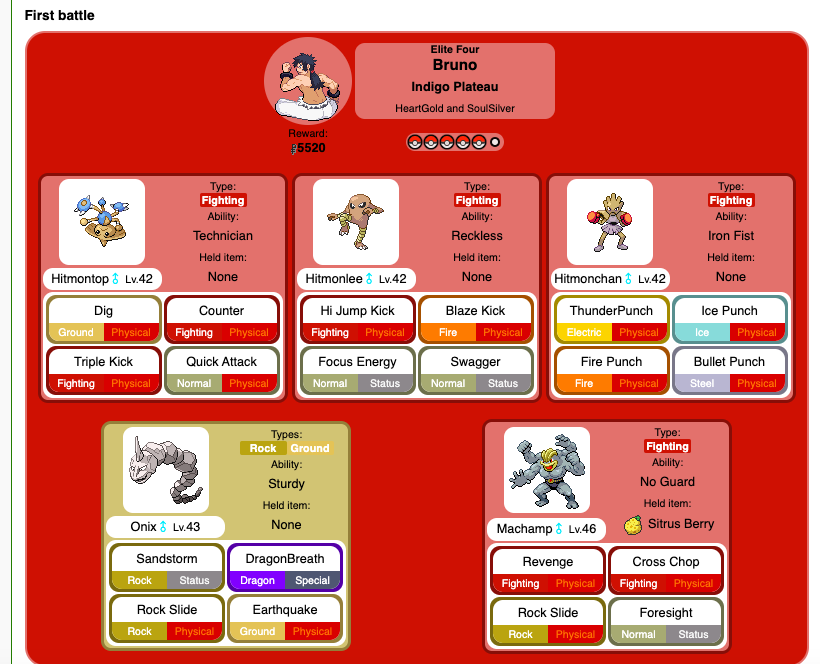 All you gotta do is wait for Hitmontop to derp with Dig, then EQ his face off (you can use Rock Polish to accomplish this turn 1, assuming he outpaces you, then CRUMBLE his face off turn 2). Golem definitely outmuscles Onix, and Chan likely won't have the firepower to break through Golem's Defense most likely (though Ice Punch can sting, it shouldn't OHKO you so you can get a decent hit off). You SHOULD fear Lee and Machamp though.

Next is Karen whose Umbreon is a travesty of game design, and Gengar has Focus Blast and Vileplume has Petal Dance so it's kinda shaky. On the other hand, you easily take Murkrow and as long as Houndoom goes for Nasty Plot or doesn't roll the 20% flinch chance of awful you should OHKO it (notable, as Houndoom is a pretty big threat, and seems to go for Nasty Plot turn 1).

Finally, DRACULA I mean Lance! Gyarados sucks, but if you can get in on Aerodactyl or Charizard, you can Rock Polish up, Rollout (or Rock Blast) and then hopefully use him as a footstool or a table to play Scrabble on and tie him up and beat him up and throw him out the Pokemon League (with some luck).

above: Incompetent nincompoops that Golem eats alive with a side of rice balls

TLDR: Geodude is amazing mon that should deserve S tier. While it's dominance gradually falls off after Whitney, it should never be completely useless in almost any regard and should be considered for every serious playthrough of HGSS. Without a trade, Graveler is definitely A, but Golem definitely has a shot at S.

Logs of my current run.


Rattata (12): My first attempt I crit ohko’d the pidgey with bite, avoiding any sand attack shenanigans, and 1v1’d Pidgeotto with repeated tail whips and potion usage. Going through it again the Pidgey got off a sand attack before getting 2hko’d with bite, causing to not land a single tail whip before getting crit killed by tackle. Matchup is unreliable but with item support and some luck is doable.

Geodude (11): Set up 2 rock polishes to outspeed Pidgeotto, got sand attack’d twice, but luckily landed all my rock throws anyways. It’d be most optimal to let something else kill Pidgey just so you don’t have to deal with (as many) misses against Pidgeotto and just set up the rock polishes on that. Strong matchup nonetheless.
Rattata (14): 2hkos Zubat with Bite, only concern is Supersonic. Koffing gets 4-5hko’d, so Tail Whips are necessary. Just two turned Bite into a 2hko. Will likely need item usage as poison + Tackles wear you down fast. Overall good matchup

Geodude (14): Sets up Rock Polish on Zubat, didn’t Supersonic for some reason but it’s a minor annoyance for Geodude anyways. Ohkos Zubat with Rock Throw and 4hko’s Koffing. Confusion and poison are annoying, but the mons themselves can’t actually touch Geodude so you can heal away as necessary and slug them out. Overall good matchup
Rattata (16): Scyther outspeeds and always goes for U-Turn, which kills due to my defense-lowering nature. 2hko’s the cocoons with Hyper Fang but that doesn’t say very much. Referencing other logs Rattata doesn’t beat Scyther anyways so I’m inclined to call this a bad matchup, as Rattata fails to beat the only threatening mon on Bugsy’s team.

Geodude (15): For some reason Scyther stays in to Leer turn 1 instead of U-Turning (maybe due to my defense-boosting nature idk) so it gets ko’d by Rock Throw. Cocoons are shat on. Impeccable matchup.
Rattata (16): Outspeeds and ohkos Gastly, Barely 2hko’s Zubat (p sure my rat has bad attack ivs monkaS), hit level 17. Hyper Fang 4hkos Bayleef, and between Razor Leaf, Poison Powder, and Reflect, you lose hard. Overall good matchup.

Geodude (17): Outspeed everything after a Rock Polish, barely miss the ohko on Gastly and ohko Zubat. Bayleef is sent in right after Gastly, but goes for Poison Powder turn 1 for some reason. Gets Razor Leaf’d turn 2 but a lucky crit with Rock Throw allows Rat to come in and get the ko (would’ve been stuck on this fight otherwise lol). Good matchup, can even kinda make progress against the worst starter to match up against.
Raticate (20): Hyper Fang puts Clefairy in range to waste a Super Potion, and 4hko’s Miltank. You fail to beat Miltank due to recovery + attract. Decent matchup

Geodude (18): Great matchup if ur Geodude’s a female. If it isn’t, you’ll have to be talked off a ledge. FUCK WHITNEY

(It is worth noting that you could obtain Venonat as early as the National Park bug contest and have it for this fight, but it wouldn’t have done shit for this fight besides spread poison so I didn’t bother)
Raticate (21): Ohkos Gastly and Zubat. Magnemite is ohko’d by Dig but if you prefer to save it for a different mon can still 3hko with Hyper Fang, will have to deal with confusion and para tho. Loses to Bayleef lol. Overall good matchup.

Venonat (20): 2hkos Zubat and Gastly, though will have to deal with confusion hax. Stonewalls Bayleef and wins the war of attrition with poison and confusion (it’s worth noting that the AI once switched Bayleef out during testing, but it’s only happened the one time, most of the time it just sits there and takes the beating). Outhaxed by Magnemite. Impressively good matchup.

Chinchou (20): Ohkos Gastly and Zubat with magnet Thunder (Surf ohkos gastly after Curse), 2hkos Magnemite with Surf. Loses to Bayleef but at least you can Confuse Ray it, I guess. Good matchup.
Thoughts so far:

Pretty strong, Hyper Fang is a pretty good nuke for early game and Bite is solid coverage alongside it. It does well enough in major fights, however I find it lacking the power to stand up to many of the aces so far. Feeling B/A, will be decided based on whether its endgame is as good as others have claimed.

PLEASE FOR THE LOVE OF GOD CAPTURE A FEMALE FUCKING GEODUDE JESUS CHRIST. With that aside, fantastic early-game as expected. Will hold off on evolving Geodude til it learns EQ just to see how the midgame treats him at his worst. That and Golem's endgame performance will tell me whether he's S or not.

It's, well, it's a Venonat, but defeating Bayleef by the death of a thousand cuts is a godsend considering that mon beats the rest of my team, whoops. Expecting it to put in at least some work vs Morty and the Rocket Warehouse thanks to Confusion, but its stats are just so shit I wouldn't be surprised if it let me down. I would currently place it at D but if Venomoth pulls its weight as hard as I'm hoping it will I don't think C is out of the question.

Barely got to play with it yet but the good matchup against Silver made me feel good about doing that crazy detour to get it so early. I just wish it came with Thunder Wave but other than that it's serviceable. My previous experiences with Chinchou factored with the detour have me thinking it'll be at B, but Ryota's run with it gives me hope.
You must log in or register to reply here.
Share:
Reddit Pinterest Tumblr WhatsApp Email Link