jackgraves said:
Finally, Power-Up Punch has been replaced, meaning that (barring any changes to its Egg Moves or an Event) PUP Mega Kang will not be allowed in VGC 2018. Combine that with the Parental Bond nerf, and it is looking a lot less OP this time around.
Click to expand...

I get Power-up Punch, but what Parental Bond nerf?

Confusion Self hit nerfed to 30% and Thunder Wave nerfed to 90 accuracy. I guess Swagplay will be legal again. Kappa


stage7_4 said:
I get Power-up Punch, but what Parental Bond nerf?
Click to expand...

Was in the recent Japanese trailer. Damage of 2nd hit is reduced to 1/4.

Now , the full alola dex is leaked ? Will there be any new mons in the main game which wasnt in the datamined list of mons ?

Dark_Raven said:
Now , the full alola dex is leaked ? Will there be any new mons in the main game which wasnt in the datamined list of mons ?
Click to expand...

Possibly but don't bet on it.

The only one I'd truly consider are mythics (Hoopa, Mew, Diancie, those guys) at this point, but Marshadow might be covering that hole.

Others have countered with a lack of fossil pokemon, but the more scientific minded double countered that volcanic hotspots would lack fossils anyway (due to their geological "baby" status). And since the item data leaked without ANY fossils (even old ones) period...

I was looking at the demo text data dumps that were released, this stood out to me:

So we can make an educated guess that there's a move (or an ability, but that seems unlikely) that switches your speed with your foe's. Seems interesting.

What is this fusion? Is it for Kyurem?

eworm said:
Scizor has Bug Bite. It gets maximum Technician boost and is physical.
Click to expand...

If Leech Life gets a boost of 40 in power (60), then Leech Life surpases Bug Bite.

Technician Leech Life Scizor is an exciting thought, but is it assumed that it could then learn the TM in Gen VII? As far as I know, Scizor doesn't get it at the moment (checked Bulbapedia for this).

I'm not sure if this has been said already, but one of the UB designs reminds me of Guzma from its hair (the one below UB-02 Absorption). Also, UBs presumably being catchable seems weird to me, although I'd assume that they would only be usable in-game and not WiFi.

On another note, the entering animation for their Pokeball does look pretty nice.

The best solution, IMO, would be to make UBs catchable only with the new Ball - and then give us ONE of those. Choose your Ultra, but choose wisely - cause the rest you'll have to hack trade for. Or, y'know, play the game through again several times.

What is this fusion? Is it for Kyurem?
Click to expand...

Made a quick Google search and they do seem to be the DNA Splicer messages. So nothing new. This + the UB that looks like Guzma make me feel kinda even more icky about UB being catchable. It's like catching a half human or not really Pokemon thingy

A lot of interesting developments (pre-evos for legends, wtf?), but I'm also kinda disappointed in the size of new Pokemon. The pre-release info of ORAS didn't bother me too much since there weren't really any new Pokemon besides M-evos, but showing off nearly all the new Gen VII Pokemon in official pre-release info seems a little bit strange. Considering the geography of Alola, I was also kinda expecting more variety in oceanic water types in the regional dex. The new Water types are cool, but the previous-gen waters seem kinda lacking. No Horsea/Skrelp, Mantine, Remoraid, etc. Lack of Mantine (and Remoraid by extension) seems especially weird since its a parallel of Skarmory, which is in the dex.

Two pairs of fossils + Aerodactyl is pretty interesting though, especially for a region that, as many have already pointed out, isn't too ancient; two fossil pairs in one game is a first afaik. Considering Hawaii has a decent sea turtle population, I wonder if Tirtouga and possibly Archen will be our first "living fossil" Pokemon that you can catch in the wild, while Aero and the Sinnoh Fossils remain as traditional fossils that you have to restore?

QuickBH said:
Where is this list of TM moves in S&M?

lol I'm not gonna pretend this matters at all. Look at Scald and tell me if it really does matter.
Still RNG that can and most likely will fuck you up at some point. I'd have much prefered if they had tweaked the damage formula instead.

After the confirmation of UBs being catchable with a special ball, they really give me Shadow Pokémon vibes (Pokémon Colosseum/XD for Gamecube), like an extreme version of XD001 (Shadow Lugia). If Shadow Pokémon had to be captured with special methods and then "purified" to be used as normal pokémon, it wouldn't be that much of a stretch to think about an "updated" analogue for UBs, were you can catch them but not for using them as Pokémons. What if you have to catch them to make them turn back to humans? Or send them back to their dimension? Or whatever will the plotline be. Overall, in my opinion it's still likely that they'll remain a 7th gen gimmick as Shadow mons were a Colosseum/XD gimmick, instead of being a new category of usable creatures available for future games.

As I look over A-Persian again, I think I know why I dislike it so much. It isn't that the head is an odd shape, because heck, it had potential to be a good design! It's that the rest of the body is still relatively lean, which gives it a horrible bobble-head appearance. If they took the time to maybe even out the design, and maybe give the head more feeling instead of a round ball (someone on another forum did some art of how it could of looked, which is immensely better. See it in the hide tag.) and give it the appearance of an actually cat by giving it lots of fluffiness, I would of liked A-Persian. But alas, it's a wasted design from what could of been a great Pokemon. Saw this in the text file, wonder what this could be

Jibaku said:
Saw this in the text file, wonder what this could be

Um... you can transfer one with PuP using Pokebank?

Wimpod's evo I can definitely see getting Intimidate (as a "reverse" Ability to Wimp Out), but it might also receive something new.

Apparently (I'm not gonna claim 100%, I don't think even the dataminers would) the Alolan Dex (and thus VGC2017 roster, by the way) looks as follows: 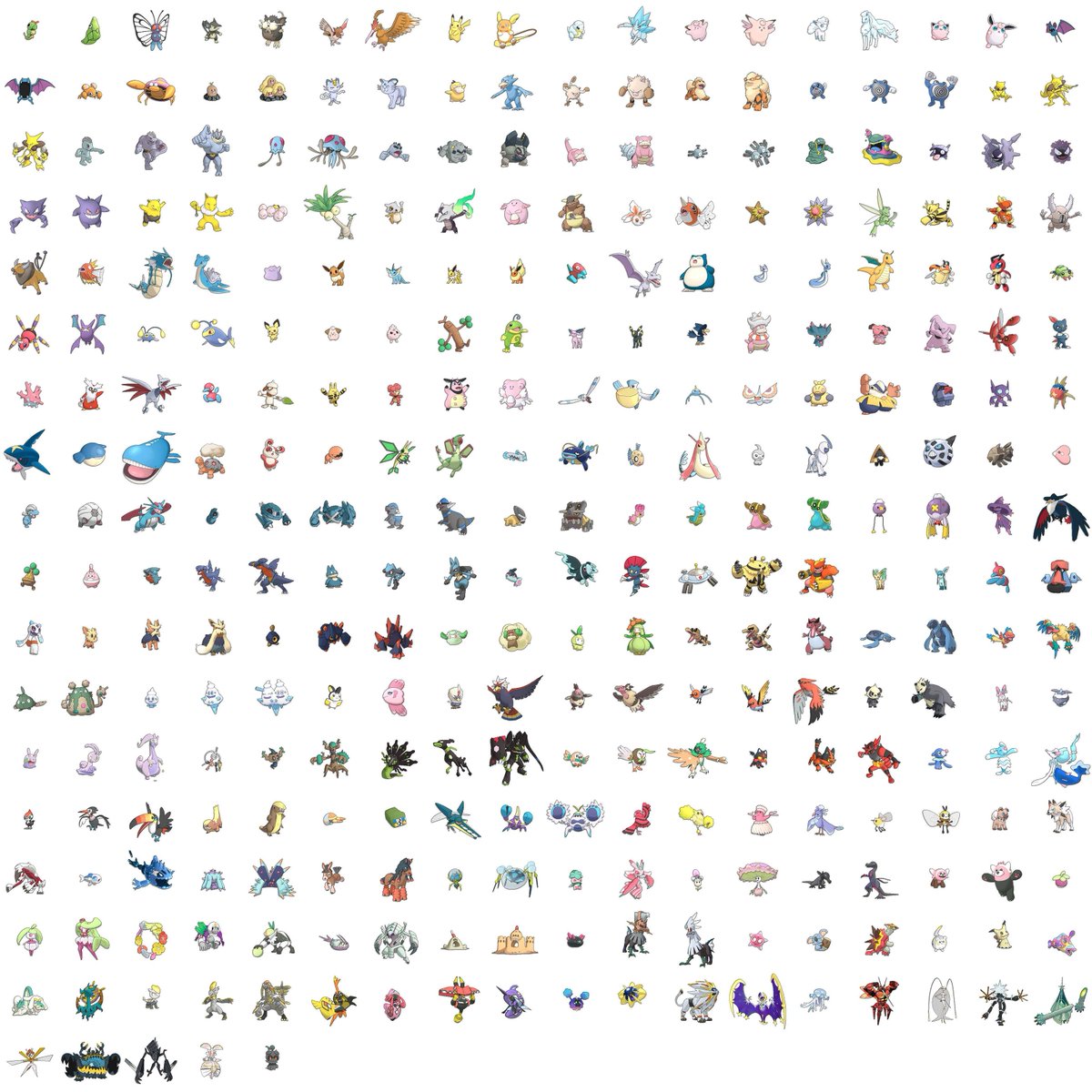 ​
​
Wigglytuff is here. All is well.
Also, all pseudos except for the two Dark type ones, because Dark-type in Alola is apparently 90% Gen I ^^
Talonflame still present, but between Psychic Terrain, Queenly Majesty and Dazzling and speedy Lycanrock, I'm guessing it won't be nearly as useful as it used to be.
Parasect, Moremorelull and Smeargle (why) are the only Spore users.
Expecting Terrain Wars if the Tapus are allowed in the format.


Do You think the seven remaining exclusive Z-Moves are all gonna go to Pokémon from this list? I think it's likely and my bet would be on Machamp and Lapras, perhaps Flygon and Milotic...

Philos said:
Um... you can transfer one with PuP using Pokebank?
Click to expand...

It won't be VGC applicable for this year (2017) at minimum. It won't have the "Alola Plus" sign on it which is what denotes it as being Alolan and therefore legal. Maybe next season it will change, but right now Kanga has some pretty solid nerfs.

DHR-107 said:
It won't be VGC applicable for this year (2017) at minimum. It won't have the "Alola Plus" sign on it which is what denotes it as being Alolan and therefore legal. Maybe next season it will change, but right now Kanga has some pretty solid nerfs.
Click to expand...

I wonder if there will be a Burning Terrain to go with Electric and now Psychic ones to go with the Fire/Fairy Tapu Pokemon.

What would it prevent?

DHR-107 said:
It won't be VGC applicable for this year (2017) at minimum. It won't have the "Alola Plus" sign on it which is what denotes it as being Alolan and therefore legal. Maybe next season it will change, but right now Kanga has some pretty solid nerfs.
Click to expand...

Do we know if that Zygarde item switches between 10% and 50% forms or whether there's a way to start the battle with Complete Zygarde?