Moderator
Currently all logos were done by 0Nl thanks friend!​
⏮ RoAPL 5 | Discord | Spreadsheet Coming after the draft!!!

Chronological
regex search (Notepad++) on Auction Log and remove lines not with .*Scrappie.*has bought.*\!$ using mark all; and then do search -> bookmark -> remove unmarked lines.
Additional Steps for Sorted by price:
Delete .*Scrappie:\s, has bought\s, and !
Replace \*\* with [
Replace \[\s?\[ with ]\t
Replace \[\sfor\s with \t
Copy to Excel and reverse Column order, Sort by Price.
Copy back to Notepad++ and Replace \t with
Change FALSE to false if need be.
Sorted by price per teams:
copy from .pricelist, arrange alphabetically and swap columns.
The auction occured on Sunday March 29th at 02:00PM EDT / 08:00 PM CEST​
Last edited by a moderator: Yesterday at 12:49 PM Arbitrations
​
March 15th: ICBB players are allowed to join, whereas tournament and circuit banned players are not.


Ruleset Changes / Clarifications
​
March 15th: Entry into the playoffs is decided by the top 4 according to Most Team Points > Most Individual Wins > Least Individual Fail Points (2 points for an adjudged loss and 1 point for a dead game). If a tie persists, head-to-head will be evaluated, and a 3-on-3 tiebreaker will be scheduled if the head-to-head was a tie.

March 15th: A team week win is worth 2 points. A team tie is worth 1 point. A team loss is worth 0 points. All gens matches are FT1W, except RBY which is FT2W. All match results give individual wins and losses. Dead games and ties give neither a win or loss.

March 15th: Retains were accepted, because half of the teams are returning teams from last year. However, teams can retain a max of 3 players and cannot trade retain rights. The retain rules follow the same format as the SPL ones. If a manager wants to retain a player, managers must do a forum or discord PM with all the host, HSOWA, vanisherrr, and kjdaas, and tell which player they want to retain and what their correct retain price is (last year's price plus 3k, but 10k minimum).

March 15th: Like last year there will be no midseason at all, but managers will be able to trade and/or sellback players from the start of the Week 2 until the end of Week 4. Sellback replacements consist of any valid unbought player. Players traded or bought as a sellback replacement will not be able to play until the following week. Sellback replacement order will be determined by highest value of the player being sold back. In the event of a tie, the first manager to send a valid PM is prioritized. For a sellback to be valid, managers must do a forum PM with all the hosts: HSOWA, vanisherrr, and kjdaas. The deadline will be on Saturday 23:59PM EDT each week (2-4) and we will announce the sellbacks on the Sunday, and let you know earlier if there are any sellback replacement request clashes.

March 15th: Both Players involved within a match whose replays are missing (not saved or publicly available) will have a counter incremented. In the case of RBY, because of FT2W, every missing replay will increment the counter by 1, while in all other gens, the counter will be incremented by 2. When the counter reaches 4, a player cannot play for the following 2 weeks. Should they return and then further increase the counter to 6 (counter not reset), they cannot play the following 3 weeks. To prevent missing replays and allow battles to potentially be reloaded, we require every player to play their matches on https://smogtours.psim.us.

March 17th: The Canalave Crobats have retained Insult for 11k, so their total auction credit is now 120k-11k=109k.

March 18th: The Asperia Arcanines have retained Kebab mlml for 10k, so their total auction credit is now 120-10=110k

Feel like I be runnin' a race I'm not winnin'

So, I was managing Iki Igglybuffs for that mock. I have builded my draftplan 5 min before the beggining of the auction with 2 phones (1 for the spreadsheet, 1 for notes) and a PC.

My English isn't perfect so I hope you will understand.

My first buy was Diophantine who's good at GSC and other tiers so I said to myself: "this guy is sub for GSC 100% + he's flexible + he worked already with frenchies". Then Roro nom popped up. I was like: "WTF, Roro signed in? OMG, I'm putting 30k max, he's worth all my money". I bought him for 28k (thx guys for upbidding, but I won in the end). I was happy and then I had to think about a teambuilding core who can work with Roro. The answer was: BIHI. Roro for GSC + ADV and BIHI for DPP + BW (RBY doesn't need teambuilding, just put a good player and pray for luck). I see a good French core so I'm like: "let's go with good frenchies core". So I bought Zokuru for GSC and Emeral for DPP. For RBY, I putted Vileman because someone stole Metalgro$$ + I played with Vileman in a team tour and he's really good at RBY, just unlucky but karma has an end. Then I saw that I have no BW so I took Caasi (good BWer and knows French so only good things). Then KJ said: "Alumn, it's not WCoP. You don't have to buy all French guys". Pfff, shut up you morron. Then I had to secure gen1-3 with a good player so I wanted We Three Kings (winner of RoA Tour) but I got robbed. Same with Void for BW and Marshall.Law for BW + teambuilding (this guy builds hot teams in BW like corckscrew in ORAS, so ngl).

Then I had to go and Alkione took the management. Taking Rokhan is ok to fill gen1-3 and BW. Lucix and Sageau is ok but that was wasting 3k when you have Emeral as player and BIHI as teambuilder (but it's mock so who cares). Idk Vulpix03 and col49 so I can't say much but he took players in tiers we were lacking subs so it's ok.

The lineup in general:

The draft plan worked out in 75% so it's ok. Thx KJ for upbidding my players :). 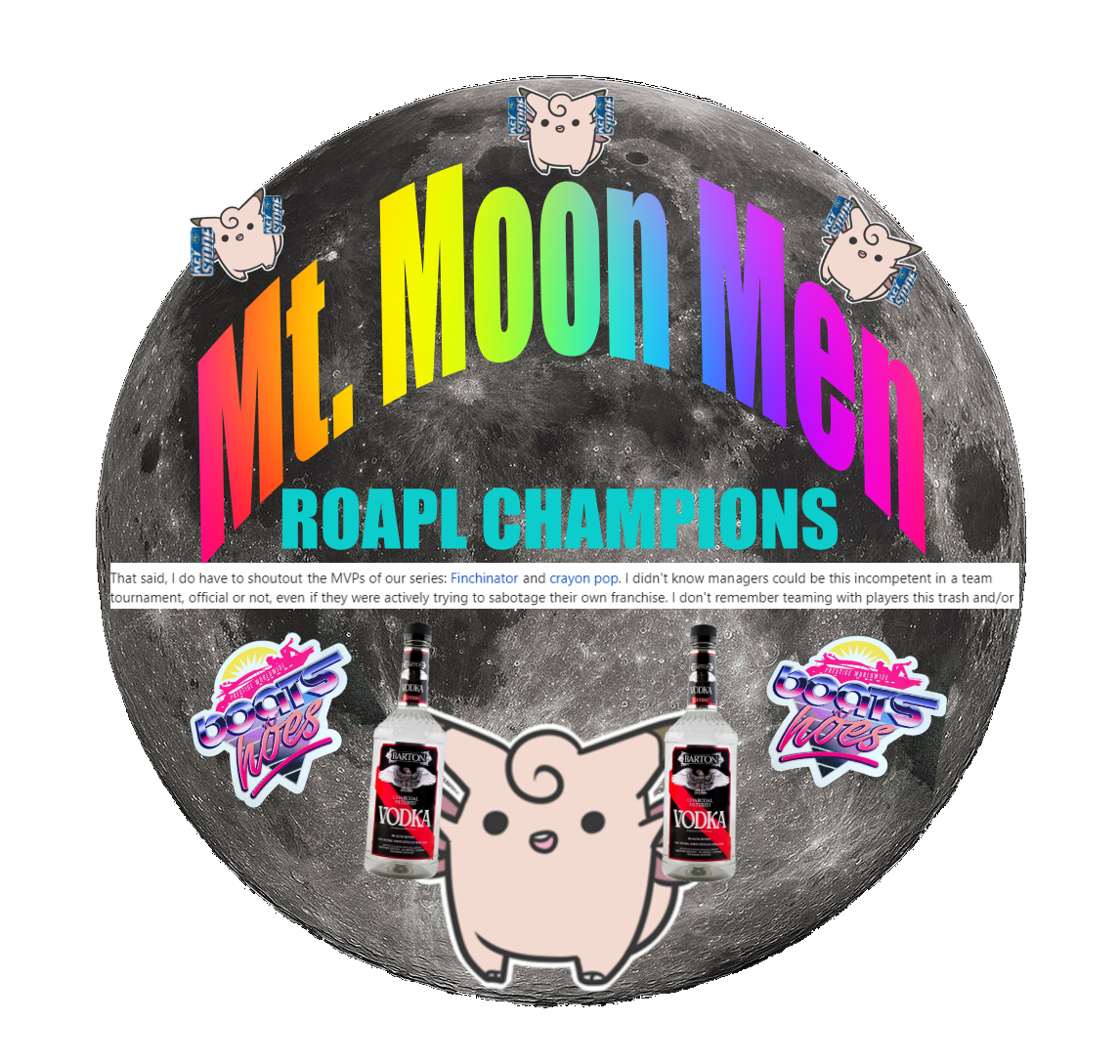 
Draft plan: Get TDK and M Drag for leading the team and overall decent picks to fill the team. Also relied hardly on spanish players that I trust and I think they have a good level. As I think teamwork and creating a group is also very important, I trusted a lot of friends and people that I have worked with many times like, roy, ranshiin, oibaf, Bratva, FV13, Luis, eeveeto, Thiago...

Don't take to serious who its in the initial LU, because I think starters and subs have almost the same level and will be rotating every week.

RBY: Ranshiin is a contrasted player and main in the tier, and will be playing alongside TDK, who is a world-class player.
GSC: Picked Oibaf who I have known for a long time, and has done great records in a lot of teams that we have been together, plus he alongside M DraGOD, who is one of the best players of all times. RealFV13 can also enter in MDragon slot, if I see we're losing too much games in DPP/BW.
ADV: Picked 2 personal bets and 2 great friends. They both main the tier, and are very consistent picks, as far as I see it. They won't end up 7-0 but will manage to end up 4-3 or 5-2 without any problem. Also Melle and Eeveeto can enter here, and MDrag will be helping with teams and prep.
DPP: Kebabmlml was retained by the team, i don't know too much about him, but they told me he was good on DPP, so there he goes. Alongside him is Luispako the goat, AKA UNSETS LORD (say hello to EXPERT BELT RACHI) that's a pick I really like.
BW: Bought Asuya cause he's WCOP level and I lost Raiza and put myself because I have to feed my ego.

My lineup (with help from CALLOUS):

^ see The Sprinkler's screenshot above.

See the OP for other kinds of logs.