Soft-resetted a nice little bacon birb earlier today for the VGC season. Sync failed (was initially going for Timid), but the end result was Jolly, which is still a nice nature right now in the Sun Series. 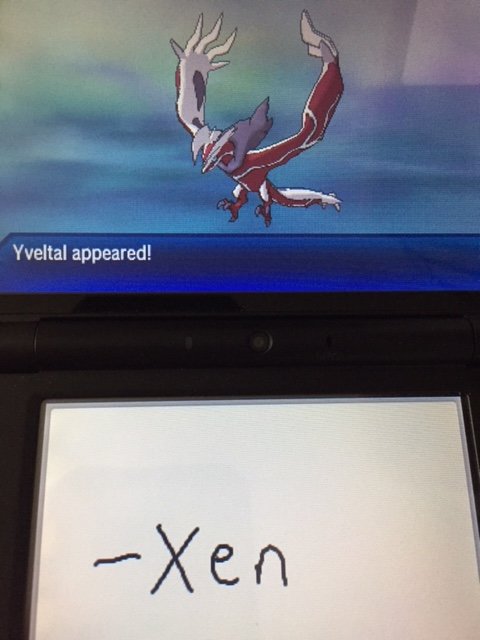 What's really cool about it though is that not only was it a quick hunt (didn't keep tabs, but it was around 50ish SR's), but the IVs ended up being extremely good too. The IV spread ended up being 28/31/31/4/30/31, which is just one HP IV away from being essentially flawless at lv 50 w/ a Life Orb HP value. Definitely going into my trophy case. 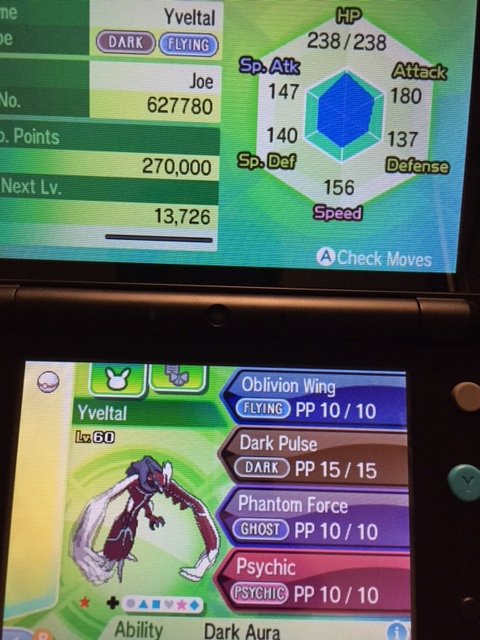 Currently Safari hunting in HGSS and randomly ran into a shiny Ditto (only the 2nd wild shiny I've encountered in this game).

Found and caught a shiny Inkay while leveling the last couple thousand exp points a mon needed to reach lv 50. Unlike all the previous shinies I've encountered, I hardly cared about it. After finding ~20 of them in Gens 6 & 7, I've become desensitized :(

I have had pretty poor luck regarding shinies.

Back when G/S was the new thing, I encountered a shiny Pidgey and successfully caught it.

Throughout the years, I did not find any shinies despite playing every generation that was released. My friend on the other hand found multiple shinies in Emerald and beyond, including Torchic, Latios, and a Rhyhorn.

A few months ago, I was searching for a Wooper/Quagsire to play with on an Crystal ROM. I found a shiny Quagsire, but accidentally killed it.

And that is the extent of my shiny encounters throughout the past 15+ years!!

I've caught quite a lot of them, relatively. I never did shiny hunts but had several games in which I encountered one. But I have to say, I've (re)played countless times, especially Gold/Crystal and Ruby/Emerald over the course of 15 years.

What I remember as my first shiny Pokémon was a Noctowl in Pokémon Gold (matches the colour palette ^^). It looked really awesome! I also remember a shiny Tangela I had accidentally beaten when I was training during the night and didn't notice the yellow sheen it had. In Ruby/Emerald I had several Pokémon (mostly common ones) as shinies. I still could find Grimer, Aron and Wurmple. I think I've caught Poochyena and Marill too, but I wasn't particularly interested in shinies and didn't trade them all. In Platinum I definitely had a shiny Zubat, which looks really sweet too.

Of course, like the others, I had some bad luck too. I encountered a shiny Wurmple in Ruby before I could get Poké Balls, for example. ^^

Never did shiny hunts but caught more than one. From what I recall my first shiny was a Drowzee in FR. In the same game I caught a Caterpie, a Nidorino, a Phanpy, a Growlithe and a Clefairy. Then got nothing for some generation but found and catched several shinies in BW. To be more specific, Altaria, Mienshao, Jigglypuff, Drifblim, Tangela, Clefairy, Golduck, Litwick, Sandile and a newborn Spheal from an egg.
The most important shiny I found was a Metang but I couldnt catch it because of some bad luck. Basically, I was hatching eggs so I only had 5 eggs and Volcarona in the team. I found the Shiny Metang and he attacked me and got burned by Flame Body. Metang chances to get caught are extremely poor so I literally saw him dieing turn after turn in front of me.

Moderator
Guess I might as well put this here. Came across this in my current Vega LP. I've been fighting a massive amount of wild Pokemon for grinding but it was still unexpected to say the least. Modest nature too. It's a shame that it's kind of a terrible mon, wish it was good enough to be worth using.

It outsped my Prinplup so I had to risk the 50/50 to even get a shot at catching it, but it targeted it first turn... Worse part is that my first thought when I ran out of repels was "Man, it would suck to run into a shiny now." I'll have to reclaim it when I get the pokeradar. That'll teach me to help little girls lost in dark caves...

UninspiredLunch said:
Replaying Platinum today and that little girl with a Kadabra you escort through Wayward Cave killed a shiny Geodude

It outsped my Prinplup so I had to risk the 50/50 to even get a shot at catching it, but it targeted it first turn...
Click to expand...

Oh, that's soooo frustrating! Also, the message you'll get in those double battles makes me want do defenestrate my console: "there are two Pokémon, it's impossible to aim!" When one of those Pokémon is shiny, and your other half is uncontrollable... I feel you. :(

Miss Cottonee said:
Oh, that's soooo frustrating! Also, the message you'll get in those double battles makes me want do defenestrate my console: "there are two Pokémon, it's impossible to aim!" When one of those Pokémon is shiny, and your other half is uncontrollable... I feel you. :(
Click to expand...

And the shiny is a Geodude/Graveler and is happy to Self-Destruct...

I have a Shiny Pidgey. No, really.

My cycle is ending here, thanks for everything.

I remember the first shiny Pokémon that I found was Taillow at Pokémon Emerald, unfortunately I killed the Taillow because I did not know about shiny Pokémon before.

I SOS chained a shiny inlay the other day. It is my first SOS shiny and got it cloned, and trained that clone into a BR Malamar for a giveaway later on, to celebrate my first ever successful SOS chained shiny hunt.
Last edited: Nov 28, 2018

My first shiny was a Hariyama on victory road.


it whirlwinded out of battle first turn

My first shiny (outside of lake of rage Gyarados and me playing around with an AR (relax all those are gone)) was a random encounter Magnemite in moon, and it only happened because I turned off my game because I thought the last time I saved was later than it actually was. lol

Okay so I was catching junkmon for a trade and bam, random encounter shiny.
Not telling you what as that ruins the surprise for the potential giveaway.
Last edited: Dec 23, 2018

So yeah I was making my way through victory road in let's go pikachu, and all of the sudden a green Golbat pops up (naturally I knew that wasn't the normal color and realized it was a shiny)
So I go after it and use a gold razz berry, pop a dual ultra balls at it and Wala I caught it.

In BW I was hatching eggs in that place where Kyurem is, and you can find Metang there. Metang has a bitterly hard catch rate (same as mewtwo) and I found it shiny. Unfortunately, my only pokèmon was a Flame Body Volcarona (and 5 eggs) that couldn't touch Metang without ohkoing it. Worst came when Metang touched me and got burned. I literally saw that shiny Metang in front of me while I couldn't catch it.

Oh, and once, the Poochyena threatning Professor Birch in emerald (or was it Sapphire?) was shiny.

Here's Mandrake for you
The thumbnail is the chain info 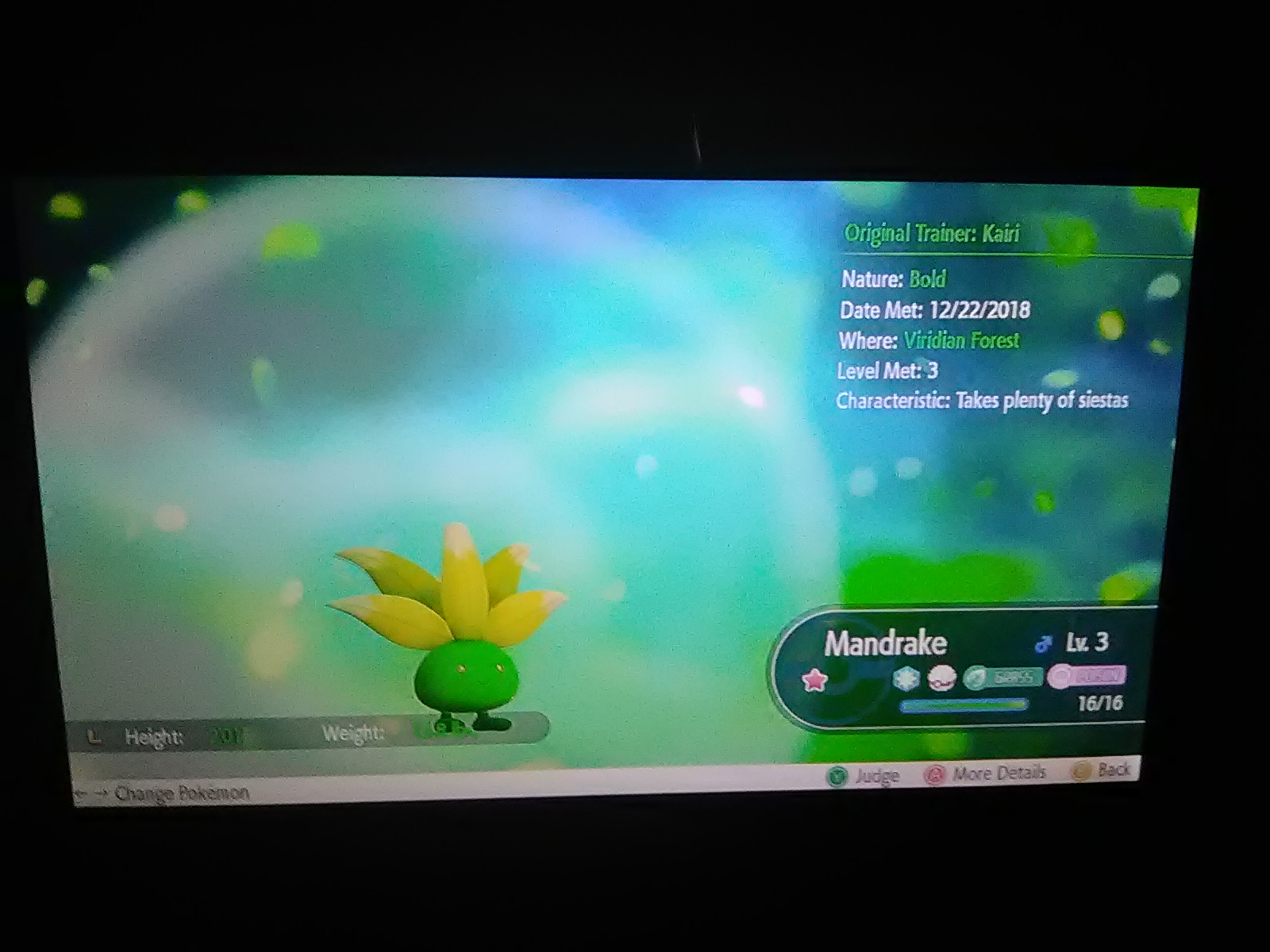 After years of trying, I finally found my Xmas shiny! 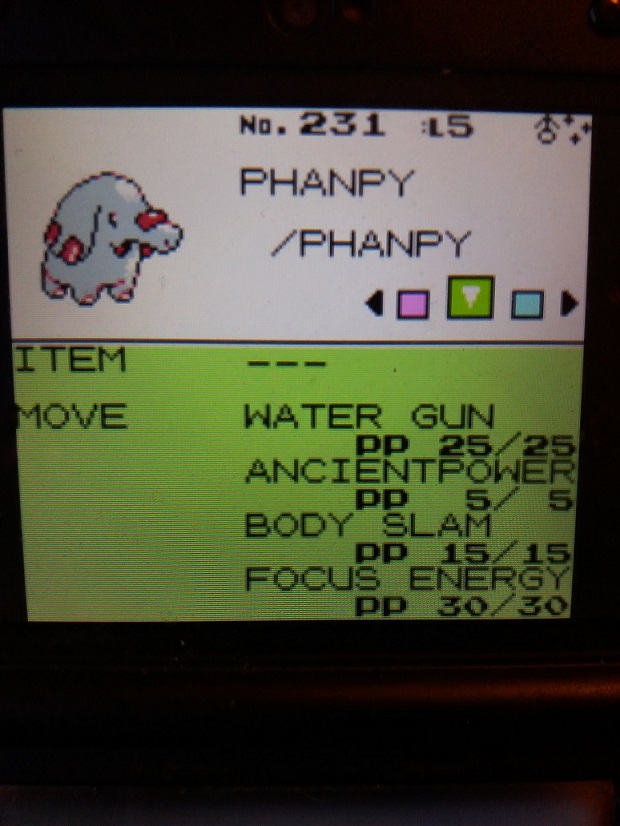 It was breeding project that lasted several months in my VC Crystal. My original intention was to get just Phanpy with Water Gun egg move (Crystal exclusive), but when I looked at his gen 2 egg moves, I found out that he can learn exactly 4 egg moves. So why not make the ultimate Phanpy? Well, there is a catch. Several, in fact. First is, in gen 2 only males pass egg moves. There is a solution, tough. Phanpy belongs to the same egg group as Smeargle, so theoretically I just have to get Smeargle and Sketch all four moves. Catch two: Ancient Power is learned by leveling up only by fossil pokemon (which I don´t have acces to as I don´t have 2 DS system, and therefore can´t transfer between VC gen 1 and 2) and Corsola at level 43. Luckily you can catch Corsola with Super Rod at level 40. Great, Corsola caught.
Now the harder part - how to get Ancient Power on Smeargle, when double battles aren´t a thing yet and Ancient Power at level 43 kills every wild Smeargle in one hit? Other moves are learned by wild pokemon and easily accesible - Water Gun by Wooper and Poliwag family, Focus Energy by Machop family among several others. Oh, and let´s not forget, the Smeargle must be male. So in the end I was forced to breed said Corsola (which had to be male, and Corsola has 25/75 male/female ratio) with Wooper, to get Wooper with Ancient Power. Now to level that Wooper up, so he can outspeed Smeargle, but not kill it. And Wooper (and Quagsire) aren´t exactly the fastest thing alive. Finally at level 25 it was enough to get the job done. Male Smeargle with Ancient Power secured. Now to the tedious job of leveling it up by 30 levels, so he can learn Sketch 3 more times. And each time let him Sketch the desired move. After long time, it was done.
And here comes another part. Getting female Phanpy with Shiny genes. For start, I have the obligatory red Gyarados. Pokemon belonging to the same egg group as both Phanpy and Gyarados is Ekans. So I caught female Ekans and bred her with Gyarados to get male Ekans. This male Ekans I then bred with freshly-caught female Donphan, to get male Phanpy. Then I bred this Phanpy with another Donphan, this time male, to get a female.
And finally, I bred this female Phanpy with Smeargle. But the troubles weren´t over. As Pokemon in the Day Care level up, they learn new moves and forget the old ones, so I had to carefully monitor how much has Smeargle grow and every 10 levels get him out and level him up manually. And let´s not forget, that they were pokemon with same trainer ID, but different species, so the odds of finding an egg wasn´t exactly the best. The odds of getting shiny were 1/128, taking into accout Phanpys 50/50 gender ratio. But it took loooong time. Smeargle leveled to 100, Phanpy got from lvl 5 to 88.
This was my longest and hardest shiny hunting project, and I am happy that it came into fruition on Christmas.

Well that definitely wasn't planned. Been breeding some fossil mons for a trade and have literally just hatched a shiny female HA Omanyte.

Only 4 perfect iv's but a great surprise none the less as I was just repetitive hatching and not watching the screen.

The first time I tried capture combos in LGE I went after Caterpie in Viridian Forest and found my first shiny since Friend Safari (Mankey). Turned out to be Modest as well, so that's awesome. Surprisingly it came after a combo of ~26.

My only other shinies besides the two mentioned above are a random Snover in the snowy areas of northern Sinnoh (nicknamed Bluepom, wow what a great name) and a Gen 2 Poliwag (gone forever