Community Leader
IDK, if you need to do something super precise consistently, uninterrupted in a match (if Olimar dies or uses a smash attack he loses the effect) in a match missing once or having to take more time to set up could cost you the game. If it turns out to be feasible, then I think that Zelda would also be a good option, since she's really good at pressure and can stock tank. Villager does those things too but idk if you can pocket the Pikmin.

verbatim said:
IDK, if you need to do something super precise consistently, uninterrupted in a match (if Olimar dies or uses a smash attack he loses the effect) in a match missing once or having to take more time to set up could cost you the game. If it turns out to be feasible, then I think that Zelda would also be a good option, since she's really good at pressure and can stock tank. Villager does those things too but idk if you can pocket the Pikmin.
Click to expand...

You can pocket Pikmin thrown with side-B, but not smashes or throws. They're not counted as projectiles for some reason.
Last edited: Feb 19, 2015

Community Leader
The combo in specific utilizes Olimar's Order Tackle (a down-b custom). I'd wager that since it can be reflected, it can be pocketed, but I could be wrong.

Aye, I haven't tested Order Tackle with my friend's Villager. Just going off of current experience, and I would agree that since it's a B move it likely can be pocketed. I can test tonight.

Customs allowed at EVO for the time being.

There has been no change. Customs are allowed for the time being, unless shown a reason to have them banned.
Click to expand...

I'm not sure if we have any R.O.B. players here, but I wrote a guide on some of his more useful ATs

I dabble in ROB, that looks bretty fun, TheMantyke

i don't even use robot and that's p gud mantyke

Anyone else get a lot of new hats after the 3DS Amiibo update? I just got 3 in the last hour, bringing my count up to 40, which gives me a rekindled hope of actually completing all of the challenges without using any hammers...


Also, I am enamored with the new 3DS. Extra shoulder buttons just makes inputs more flexible, and c-stick uairs are a godsend. Home menu buffering is lightning fast, too.

During a Smash Tour run for some custom items, I used Rosalina's Down B...and then THIS happened: 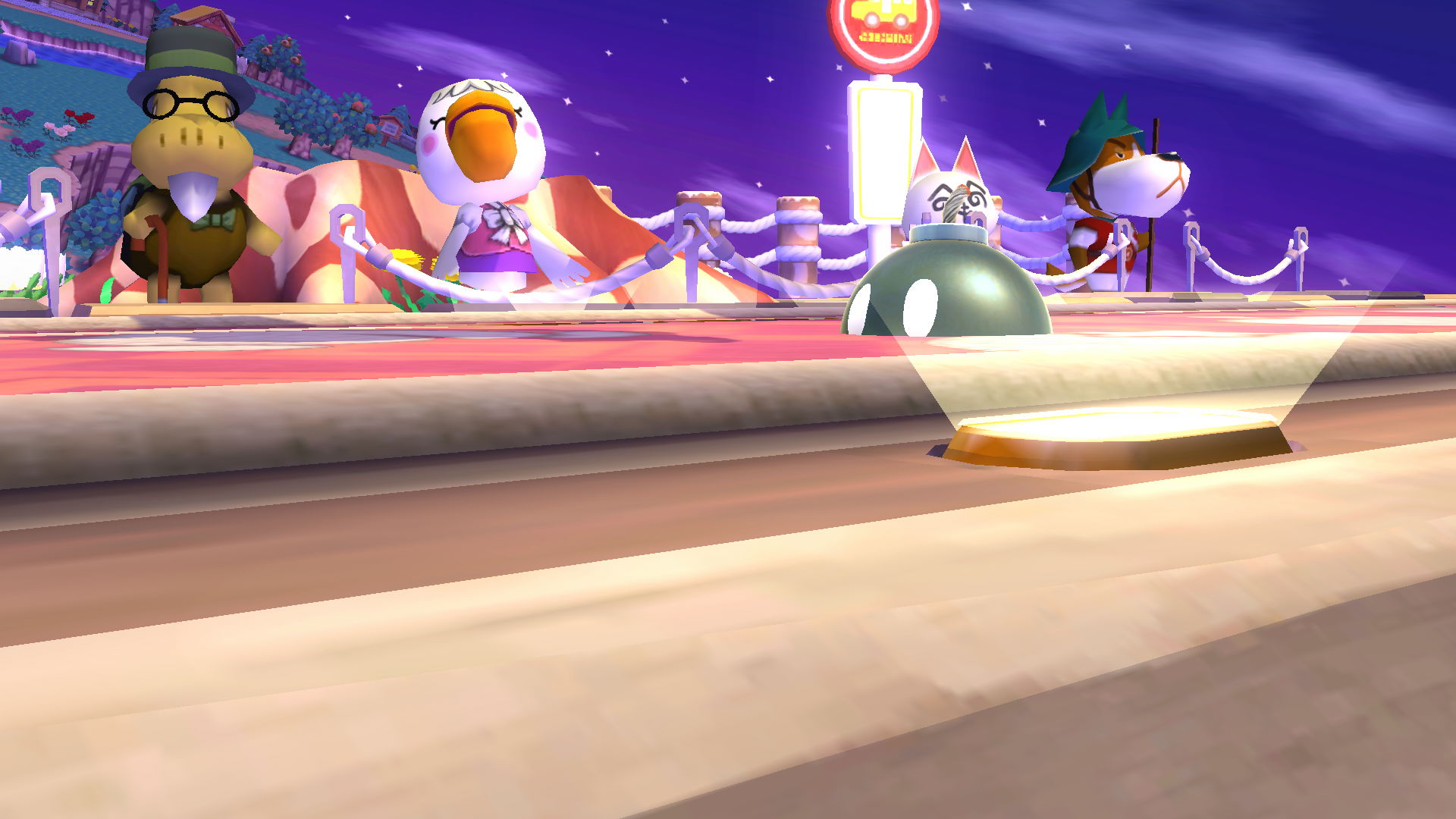 Yes folks, you are seeing it correctly. That is a Bob-Omb walking UNDER the stage. GG Smash 4. GG.

Just beat classic mode on 9.0 for the first time without playing smash 3ds in a few months. Doesn't mean anything of course, but I am surprised how easy it was. The AI sucks.

Just got the most ridiculous/amazing kill I've ever managed to pull off lol: https://gfycat.com/OilySpottedArieltoucan

Arikado said:
Just got the most ridiculous/amazing kill I've ever managed to pull off lol: https://gfycat.com/OilySpottedArieltoucan
Click to expand...

LizardMan said:
Just beat classic mode on 9.0 for the first time without playing smash 3ds in a few months. Doesn't mean anything of course, but I am surprised how easy it was. The AI sucks.
Click to expand...

Either I'm bad or the Wii U AI is much harder. Probably both.

Talpr0ne said:
Either I'm bad or the Wii U AI is much harder. Probably both.
Click to expand...

Even though I said it sucks, it is more that it is exploitable due to a linear play pattern. 9.0 can be tedious and tilt inducing if gone into without the proper mindset or strategy. I think the AI is relatively the same in both versions. I beat it with Mario, Lucina, Bowser, and Captain Falcon thus far. Generally I think defensive play and punishing the AI up to master core is the best strategy. You can use items and adapt to the stages better than the AI can.

The AI is better at shielding, grabbing, and dodging than it is at playing offensively since they have good reflexes, lack combo knowledge, approach knowledge, threat evaluation, and because they put themselves into vulnerable positions after using a move which has a long animation time. Then once you get to master core, you need to play aggressively since he has a lot more health than you do. You generally should fast fall and grab the ledge so you aren't as vulnerable after you use your recovery move if you get launched into the air. That is a common mistake which allows people to get juggled by real players, the AI, or master core.

I usually fast fall and abuse hitboxes. Bowser for example, can hit master core 3-4 times with his down B due to master core's hitbox being huge. It is also important because since master core is huge, your smash attacks can reach him if he is above you. Memorizing master core's ko moves are key, and memorizing what moves do damage. The reason for this is because some moves of his you need to dodge and some you need to shield. It is also important because you can play more aggressively when he is using a move to do damage to you instead of to KO you. He can be beaten without custom itemizations, but customs help a little bit. I play aggressively since you can get like 2-4 hits in between each time master core pauses.

You want to kill master core's first form as fast as you can, since he generally weakens you quite a bit. The scorpion form, you generally should play more defensive since he is easier to avoid and punish. Shielding and using smash attacks with any character usually works since he is on the ground. As for the swords, you generally want to move around a lot since you can dodge a lot of his attacks. His sword form can break shields too, so you want to kill him pretty fast.

Once you fight your clone, play defensive and treat him like any standard AI. The AI will probably misposition or waste a smash attack, and you can use those opportunities to punish him. I generally think it is easier to waste the clones health rather than trying to smash him out of the arena. I used speed heavy customizations, but I know other players have tried heavily defensive ones too.

Hope it helps! I am a mediocre smash player vs real opponents, but this information is what I used to defeat the AI on classic and all star mode on the hardest difficulty.
Last edited: Feb 23, 2015

this is the trailer of a local tournament i'm going to soon haha.

this is the trailer of a local tournament i'm going to soon haha.
Click to expand...

where did you find this hahaha

Photo said:
where did you find this hahaha
Click to expand...

it's a local tour happening on parnell street on saturday

I go to school in virginia and my roommate can probably walk there from his house, but because it's in august I probably won't be there. (Then again, neither will PM.)

look at my hat

-In Classic Mode, what kind of Custom parts you recieve from the lotto or from defeating custom-carrying characters is definitely influenced in some way by the stage you're fighting on (e.g.: more likely to get a Wario Custom move, or gloves, etc etc when fighting on Gamer).

-For some reason, Villager's custom move Timber Counter's tree-phase will activate its counter when in contact with Master Beast. Because Master Beast doesn't receive knockback, if you manage to plant and water the tree in the spot where Master Beast spawns, you'll be able to get in a large number of hits during Master Beast's initial spawning animation due to the Timber Counter's counter activating constantly (plus a few smash attacks if you're lucky). This technique might actually work with the other Timbers as well, but so far I've only been trying it with Timber Counter (because the sprout helps me with Master Shadow).

Not sure if any of these things have been brought up before but just thought I'd bring them up. I actually have a question (s): does anyone know if the laser beams of the turret-enemy in Master Fortress can be absorbed? And does anyone have any tips for defeating the Stalfos-type enemies (preferably from a distance)? I always seem to find myself in a tough spot when I rush in to attack only to have their shields nullify my moves, then get rushed by lasers and Stalfos and get launched into the Danger Zones.
You must log in or register to reply here.
Share:
Reddit Pinterest Tumblr WhatsApp Email Link