MZ said:
No you misunderstand. I mean in what way does getting this vaccination program rolled out take up all of Biden's resources and attention. Like he's assigned a coronavirus czar, he probably had some part to do in planning the rollout and negotiating buying vaccines, and then what? Like what does that still require that he has to be focusing all of his resources on? Your argument is that we should not expect more than just this for the time being but I do not understand why you cannot delegate multiple tasks at once here. You've just listed other things Biden can do and is doing right now, why is pushing for a minimum wage increase not also one of those things he can do? I don't understand the functional difference between that and, say, foreign policy re-evaluation.

If the minimum wage increase is not enough to make the difference to give people a livable wage then I don't understand how this isn't being concerned about the actual product being delivered. Like replace "progressives are only concerned with the intellectual debate" with "progressives are only concerned more people in poverty". That doesn't sound like a purity test to me. You're just framing it as sounding more trivial than it actually is. But even if progressives eventually cannot get the minimum wage increase passed, why not fight for better things now rather than immediately handicapping what you might get? Push for the $15, if you can't get it take the $11. I think we both conceptually agree there but you're saying that just pushing for the $15 is already complete suicide and virtue signaling or whatever buzzword and that's just kind of confusing. I still can't figure out where you get that from. Like, you might not get the votes because of Joe Manchin but you might be able to pressure him into voting for it or use the fact that he and other Republicans are voting against a popular measure in the future against them before taking the smaller $11 increase anyway. Hell, voting against the covid bill until you get the minimum wage is not something I've heard of before now but it doesn't sound like the dumbest thing in the world to like, actually fight for less people in poverty (although I admit that does seem like it gets much closer to sacrificing the safe $11 for a shot at the $15). e: to be more clear here it doesn't sound crazy that Dems should have to capitulate to more progressive members instead of Joe Manchin, there's more of them than him. We can try to get a better increase but also deliver the increase, yes? And if not, why?

I'm really just asking two questions here because I do not understand why we have to give up on getting people out of poverty so fast. $11 might be all we get in the end but it's important to remember that it's a huge compromise that doesn't go nearly far enough in helping people. It is not a living wage. I will absolutely take it if it's all we can get but you're taking that assumption as fact and that's where you're losing me.
Click to expand...

I support $15 minimum wage, along with about 47-48 Democratic Senators. I believe Biden supports it as well. Problem is we don’t currently have the votes and it does not take precedence over dealing with COVID. The house as on fire but we are having intellectual debate on the best hose to use.

My point about the states also stands. Most Americans live under jurisdictions with higher minimum wage than the Federal. That’s not the ideal situation, but makes torpedoing an urgent covid rescue package for a Federal increase an insane proposition.

Yeah, it says a lot that they think comparing Biden unfavorably to Trump is praising him lol, more than one thing can be bad!

There's just nothing to say to these people tbh, their brains were broken by Trump too much to view the Democratic Party as anything less but wise, noble heroes and not just the other side of the same coin as Republicans. They'll never accept criticism of Biden or any other Dem because "it could be worse!!!!" but of course, it could never be better.

At this point, "it's not the right time" is just an old Dem proverb. It's okay though, I'm sure economic collapse, environmental disaster, etc. will respect the process.

the thing about this bullshit incrementalism stuff is that it's essentially a non-falsifiable position. no matter what happens, the outcome can and will be used to support incrementalism and/or the 'american system.'

Please explain why wanting a viable Conservative party makes for a “lost cause.”

This is nothing but strawman arguments. It is not clear what you’re actually arguing against. “Progressives” want “big structural change” yet don’t have the votes for it. As for the Democrats, the progressive primary candidates lost to Biden. If that is what the people wanted, a “progressive” would have been the nominee.

Why would anybody want a conservative party?

Please explain why wanting a viable Conservative party makes for a “lost cause.”
Click to expand...

the only reason i'm engaging with you in the first place is to reveal how toxic your ideology is/hurt your credibility in the eyes of any onlookers who might still believe that you're 'reasonable.' you're really good at coming off as 'pragmatic' and 'reasonable,' so all I can really say is, thank you for actually willingly admitting that you want a strong conservative party. it truly does destroy any credibility you might have had with anyone except for probably mrhands.

Here, enjoy the third response in a row. I'd strongly recommend giving this a watch, because it cites a lot of info on why this has kind of been a lost cause from the start.

GatoDelFuego said:
Why would anybody want a conservative party?
Click to expand...

Opposing views can lead to introspection. None of our ideologies are perfect.


lilyhollow said:
the only reason i'm engaging with you in the first place is to reveal how toxic your ideology is/hurt your credibility in the eyes of any onlookers who might still believe that you're 'reasonable.' you're really good at coming off as 'pragmatic' and 'reasonable,' so all I can really say is, thank you for actually willingly admitting that you want a strong conservative party. it truly does destroy any credibility you might have had with anyone except for probably mrhands.
Click to expand...

Great non-answer to the question. How does wanting a viable Conservative party make one a lost cause? Be specific.

RaikouLover said:
Opposing views can lead to introspection. None of our ideologies are perfect.
Click to expand... 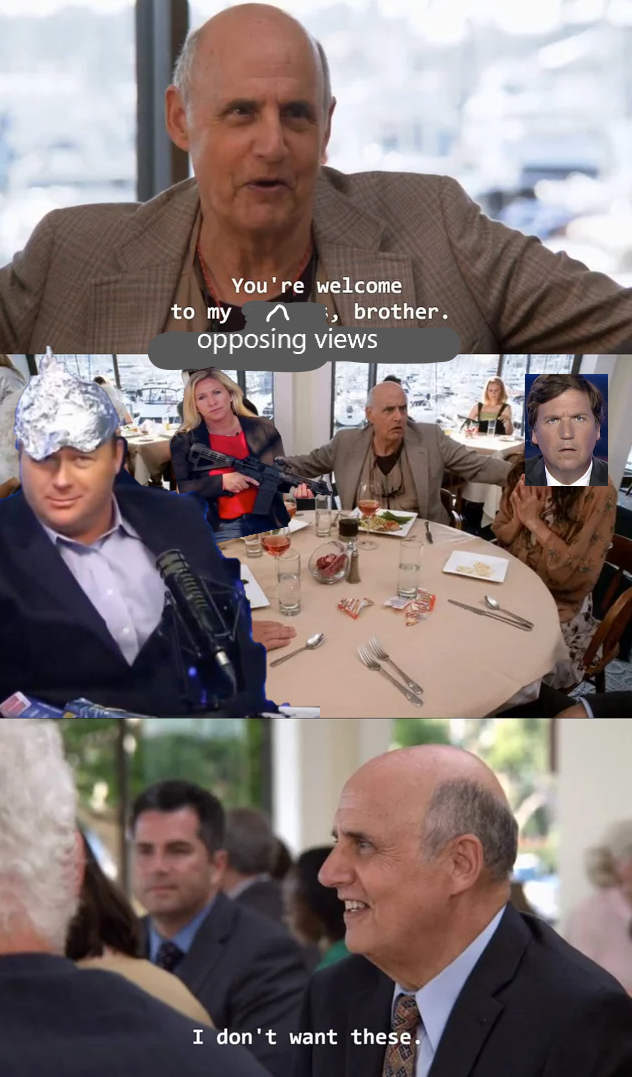 ^ youre about to get hit with the raikoulover classic: "that's a strawman. no idea what you could possibly be arguing against there"

it's pretty funny though. if you see the amount of infighting within leftist circles, the idea that we need nazis in the mix in order for there to be healthy conflict/discourse is laughable

not really related but since the title of this thread has become more general:

Edit: Or maybe the cult is true conservatism, and "moderate democrats" are too embarrassed/ashamed to be associated with them.

Conservatism is bad. Hope this helps!


lilyhollow said:
not really related but since the title of this thread has become more general:

Administrator
If you would have told me 12 months ago that we'd have complete control over the WH, senate, and house and somehow we'd still get nothing done i would have told you to go fuck off. We're literally negotiating with ourselves, Republicans don't have to do anything when these "moderate" democrats are doing it for them. Shits insane man, bare minimum and can't even do that. These are the kinds of things that stop people for voting in elections because you promise these things to working families that depend on these changes and you don't do it.

2021 is shaping up to be a great year. First we officially got rid of the Orange Turd, then Oreo™ said trans people exist, and most recently, Twitch launched a tremendous marketing campaign celebrating Womxn's History Month. It's wonderful seeing how inclusive we are becoming as a society under Joe Biden. And don't even get me started on Kamala! The representation she is bringing as a Latinx womxn is outstanding. Little brown boys and girls are going to remember her for decades when they look at their destroyed cities. I know not everyone is happy about these two not fulfilling their campaign promises, but let's just reflect for a moment and think about where we were just last year. Remember when kids were being separated from their families and being locked in cages? Now we've moved them to Child Migrant Facilities! And it's only been 2 months! Just think of how much we can accomplish in 4 years. Anyways, just wanted to share my thoughts. I'm off to help my wife with her dialysis treatment. Geez, this $1400 stimulus can't come soon enough!

Progress is slow. The smallest steps forward towards basic features every other first world country has don’t happen overnight. Surely we can eventually turn the country around if we keep the same facsimiles of progress going strong so even more people retreat from the liberalized non-commitment on pressing issues into the honest hate of the modern Republican Party, using QAnon as an outlet to make sense of why the world sucks, or numb themselves thoroughly through irony poisoning until they’re unabashed nazis.
Last edited: Mar 7, 2021

Progress historically is quite literally sudden, immediate, and usually violent.

Ya the political reality of Manchin being unwilling to vote for the stimulus if it included a 15$ minimum wage increase meant the only possible option forward was to cut that from the bill.

You do more good by passing an ok stimulus bill than by getting voted down on one you think is slightly better. You don’t torpedo urgently needed aid to politically grandstand. If the left doesn’t like that then organize in 2022 and elect more Democrats who would support a 15$ minimum wage increase.

It’s also kind of sad that the notion of wanting a reasonable / viable opposition party is treated as traitorous by...a community supposedly devoted to political discourse. Shows how far Cong has fallen down the echo chamber rabbit hole tbh.

The left already has a perfect viable opposition party: other leftists

liberalism is defending the oligarchic structure and class solidarity amongst the elite lawmakers, as if you are in cahoots with these rich ass delegates with 50 corporations in their pockets writing their bills. i mean come on. if minimum wage kept pace since 1972 we would be at $23 minimum, and even that's too fucking low!

eyerolling at how we're still caught up in the semantics of "this bill" vs. "that bill" and "this congressman said no because ACTUALLY we're benefitting in the long game" or "incrementalism" or whatever. these institutions will not protect you! these conversations do not serve you! this shit isn't a 'rabbit hole', it is DIALECTICAL MATERIALISM. it is a concrete understanding of material wealth allocation and power. it is a concrete understanding of the empire and exploitation. it is the "radical" nature of grounding our conversations in humanity instead of buying into these institutional logics.
You must log in or register to reply here.
Share:
Reddit Pinterest Tumblr WhatsApp Email Link