"Jack, you have debauched my sloth!" Want to chat more casually about the Battle Maison? Join #battlemaison on synIRC.

Want to talk about the Pokemon Sun and Moon Battle Tree? Go here.

Rules
Just like every thread, the standard Smogon rules also apply to this thread.

"Jack, you have debauched my sloth!"

A list of members who have achieved 50+ wins in every mode, and therefore obtained all trophies. Altissimo - 18/6/2016
Something a little different: A blindfolded doubles run and blindfolded runs in singles, triples, and rotations by AegisCave. And at long last the completed trophy set with blindfolded multis!
** Trophy and header art courtesy of Ssensenh **
Last edited: Jan 27, 2020

Thank you to Eppie for managing this thread for many months. The OI staff appreciates it! - Stellar

I don't think there's a thread about it yet, so here I start ^^.

The battle Maison is a new battle facility similar to the battle tower or the battle subway from the previous gens. It's found in Kiloude town and only accessible after beating the elite 4. The goal is to beat the highest numbers of trainers in a row in single, double, triple, rotation or multi (doubles with 2 players) battles.

The "regular" series lasts 20 battles with a boss at the 20th battle. Beating the boss unlocks the "super" version similar to the subway.

Each win gives battle points and you can save your progress after each battle.

I made a team for the single battles based around Mega Blaziken because it's overpowered as fuck :D. My pokes are EV trained but don't have the perfect nature and EVs because I'm lazy :p. It's not perfect but here's my team :

No matter how much genwunners will complain about this guy, it's a great supporter ! Priority screens allows to give time to put spikes and help Blaziken switch and set up. Spikes are mainly there to break sturdy and sashes and play rough is to hit dragons who may wall Blaziken. It has an adamant nature hence the physical fairy move. 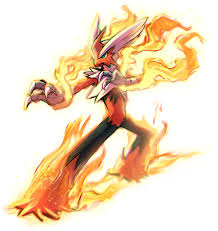 That big dangerous sweeper ! Flare Blitz and High Jump Kick are the super strong STABs, Bulk up is a replacement of Swords Dance because I don't think it can learn it in its game (breeding maybe ?) and shadow claw for coverage against some ghosts or psychic types like Slowbro or Jellicent. T-punch would have been better but there's no move tutor so yeah. 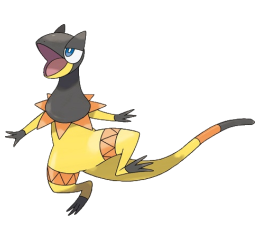 Heliolisk is mainly there for coverage to hit Blaziken counters. It has hyper beam because I don't think it can learn Hyper voice and it's actually not bad in a 3v3 format. It's STAB and very powerful, a specs Hyper beam actually OHKO a Salamance who would cause pbs :D. I changed the item magnet for specs as soon as I got enough BP for it.

As this team is very weak to ground, I'm about to switch Heliolisk for Gogoat : 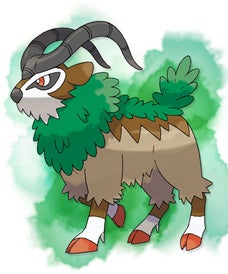 For coverage against water and ground types mainly. However, this guy is also weak to flying, at least, I have wild charge against flying types.

I have already beaten all the normal battles and now I do the super single battles using a pretty good team of (mega) Gyarados, Choice Scarf Garchomp and SD Aegislash. I am now at 34 and earn 5 BP after each battle which is really nice. These three are all flawless. I love the new breeding mechanics!

That's great, my team doesn't work well, got owned at the round 11 of the super singles because of scarfed Torterra. Scarfed Torterra is a beast, underrated in NU lol. I tried the normal double battles with both Helioptile and Gogoat but the boss demolished me :(. Her primeape had EQ and ridiculous luck with crits :(.

just beat Battle Chatelaine Nita. She used Tornadus, Thundurus, Landorus. This is what I know about the movesets etc.

Won easily. Aegislash walled Tornadus hard and could hit it all the time because of Sacred Sword. Landorus came in second and I switched to Gyarados to take the expected ground move. Gyarados set up a Dragon Dance while Nita switched to Thundurus (Probably because she couldn't hit my gyarados, because Landorus was locked into Earth Power with hit Choice Scarf). I Mega-evolved and got a crit on the Thundurus to KO it and then Gyarados took a grass knot for about 75% damage. Destroyed it with Waterfall.

edit: after this battle you earn 7 BP each battle. I don't think it will go up more than that. Still, 7 BP for each battle you win is a lot. That's 49 BP after just 7 Battles. Last gen you got 10 BP for that...

Interrupted the challenge and currently on a 19 win streak in the super singles.

Looks like everyone had the same idea as me with Aegislash. I'm still building my team, but I'm using Aegislash / MoxieMence with Memento support for easy set up. Didn't want to use overused stuff like Dragonite or Durant. Will post results.

I was on a really solid run with Blaziken, Tyrantrum, and Togekiss. Althogh that got ended after over 50 battles because of a scarfed Ramprados with Head Smash, which kinda tore holes in my team.

CBManBearPig said:
Looks like everyone had the same idea as me with Aegislash. I'm still building my team, but I'm using Aegislash / MoxieMence with Memento support for easy set up. Didn't want to use overused stuff like Dragonite or Durant. Will post results.
Click to expand...

I don't think DW durant is even available at the moment. I trained up a normal Greninja, Delphox and imposter ditto. It did ok but not amazing, but i'm happy for how well it did considering it was made pretty quickly and without much thought

je5us said:
I don't think DW durant is even available at the moment. I trained up a normal Greninja, Delphox and imposter ditto. It did ok but not amazing, but i'm happy for how well it did considering it was made pretty quickly and without much thought
Click to expand...

You should be able to get it in Horde battles.
Also, I've been considering using Pangoro with Parting Shot and Aegislash. Don't know what to do for the last one though. Probably Salamence or Dragonite or something.

I got to the first boss using pretty much nothing but an Aegislash. That damn Wigglytuff screwed me over because I forgot it was fairy-type...

I'm actually building a team now, though. So far I'm planning on Aegislash and Mega Kangaskhan, but I have no idea what my third Pokemon will be.

I have a 52 SS streak going with this team:

This set exploits the AI a great deal. I lead with blaziken and destroy everything I can until I have to baton pass out giving my aegislash or hydreigon my speed boosts. Then they take out what is left. I did have a few scares most notably a Lapras which parafusion hacks my blaziken after I missed with High Jump Kick. It took out my blaziken after I hit myself in the face a few times, but luckily my hydreigon swept lapras and his other two pokemon
Last edited: Oct 22, 2013

I'm probably going to try this place once the Pokemon Transfer comes out in December, but I might train some Kalos Pokemon. Will there be Pokecheck or anything like that available for X and Y?

I've been using Vivillon, Aegislash, and Carbink in super singles and it's doing pretty well. Carbink is mainly filler as a fire resist as I don't have anything else good that's EV trained yet. I'll probably replace it some kind of bulky water, probably Rotom-W since I've noticed I'm so Gyarados weak (haven't seen one yet though).

Sashed Vivillon destroys almost everything with compoundeyes sleep powder, quiver dance and hurricane. I rarely even have to use Aegislash unless my opponent gets early wakes and has t-wave or something. It's seriously a monster, you guys should try it out. Only thing that sucks is missing sleep powders (2.5% chance) and hurricanes (9% chance).

Moderator
I started off doing Doubles with a team of my ingame party - Noivern, Chesnaught, Aurorus and MegaBlastoise - and lost after 18 battles when I lost Blastoise to a double target on a switch then proceeded to miss five times in a row against a Shell Smashing Magcargo with Focus Blast...

I'm currently trying to build a bulky singles team with a backup sweeper. Dragalge and Mega Aggron do a nice job of covering each other's weaknesses, but they're both weak to Ground and I need a Ground-immune sweeper. Of course though, I can't find a single fast special sweeper that doesn't share a ton of weaknesses with these Pokémon and doesn't use up my Mega slot. Should I try to find some other fast Ground-immune powerhouse? Or should I switch instead to a bulky Wish passer? (Are there even any Ground-immune Pokémon in XY that get Wish?)

Arcticblast said:
(Are there even any Ground-immune Pokémon in XY that get Wish?)
Click to expand...

Togekiss, Xatu, Chimecho (lol), and Unfezant (also lol). Salamence too, but that's from a gen 3 event so it's unavailable until Pokebank comes around. Togekiss is probably your best bet.

i might post a record thread after class today, what do you guys think the cutoff of a legitimate super singles record should be (and super everything else im assuming)?


Core of Dragon + Aegislash is really starting to show up, Aegislash for #1 Fairy Killer!
-But seriously, this is looking to be a pretty popular core.
-Possible early 6th Gen Meta possibility? DragMag without the 'Mag'...?
Last edited: Oct 21, 2013

I got far enough in the normal singles portion to fight the mansion maiden or whatever the fuck she's called. Went in with an un-EVed Garchomp, Mega Charizard Y, and a Helioptile just so I could rack up enough BP to purchase the power items and actually start making a legitimate team for this thing. Garchomp's as good as ever so far, Charizard Y was alright, but I don't want to stick with Helioptile at all.

If the 5th gen battle subway is anything to go off of, A Naughty Focus Smash Cloyster with Icicle Spear / Rock Blast / Surf / Shell Smash might brutally violate the singles line. I've gotta breed one for it! Mega Blaziken also looks excellent.

I'm thinking of running this now, but I'm kind of curious about how the teams/AI in this compare to those in the Battle Subway & Battle Frontier. Is the hax level about the same or did it get better?
Last edited: Oct 21, 2013

kiddu said:
Is the hax level about the same or did it get better?
Click to expand...

kd24 said:
i might post a record thread after class today, what do you guys think the cutoff of a legitimate super singles record should be (and super everything else im assuming)?
Click to expand...