Zygarde 10% with Aura Break should not have access to gen 6 transfer moves (only three: Strength, Rock Smash, and Secret Power) in Gen 7 formats. The only way to obtain a 10% Zygarde with Aura Break in Gen 7 is assembling it with the Reassembly Unit and Zygarde Cube. You can't downgrade a Zygarde from Gen 6 into the 10% form with Aura Break. Thus, any Gen 6 transfer attacks are incompatible with it.

This doesn't apply to Zygarde 10% with Power Construct since a Power Construct Zygarde in Gen 7 can be freely changed between the 10% and 50% formes. This also doesn't apply at all to Gen 8; the Zygarde cube changed and lets you freely shift Zygarde's formes and abilities so that you can have a 10% Zygarde from Gen 6. Proof below: 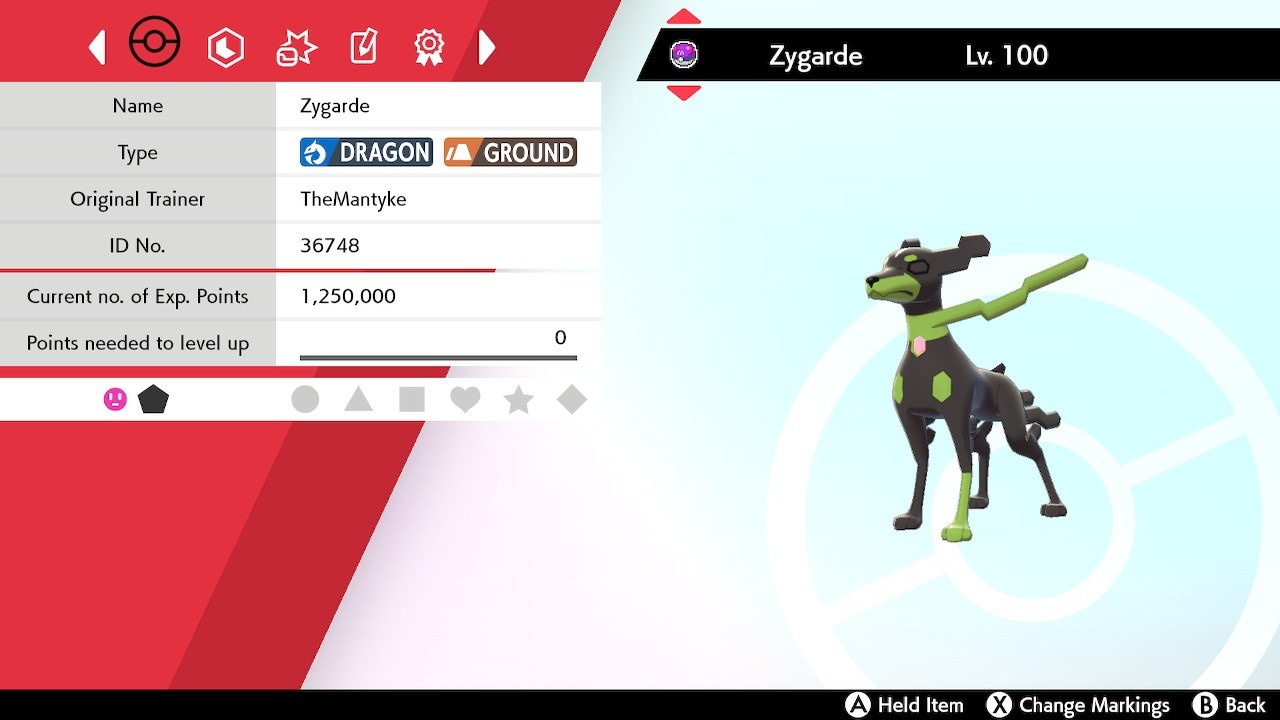 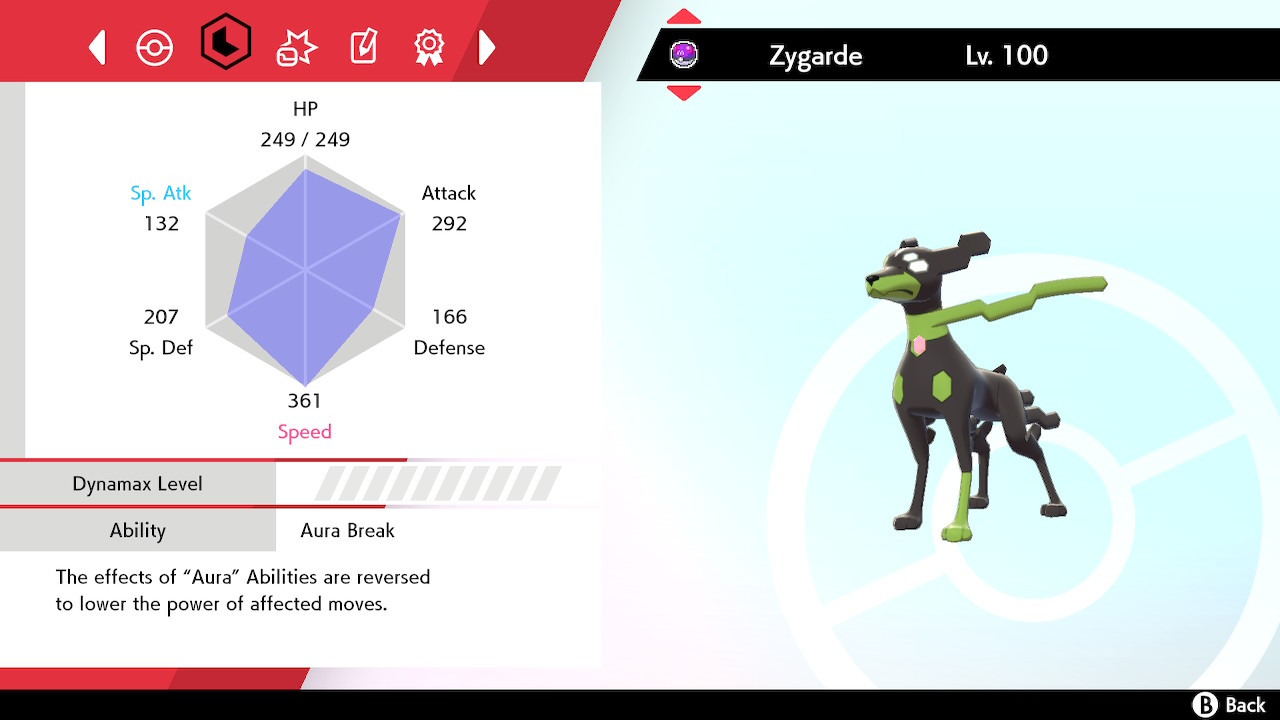 This is obviously insanely low priority, but wanted to bring the movepool error up.

BUG STATUS: FIXED by The Immortal
Last edited by a moderator: Dec 27, 2020

BUG STATUS: NOT A BUG, As said by Ytreza below, You require 404 HP for your substitute to survive a max damage Seismic Toss due to the HP of a Substitute being the user's HP divided by 4, rounding down. (Dawn of Ares)
Last edited by a moderator: Dec 20, 2020

Apologies if this isn't the right place for bugs on phone browsers but whenever I try to enable dark mode while watching replays on chrome on a phone, the battle text automatically shoots upto like 200% font size. This makes it really hard to keep up with what's happening as sometimes the battle text is so big you have to scroll to see what happened. 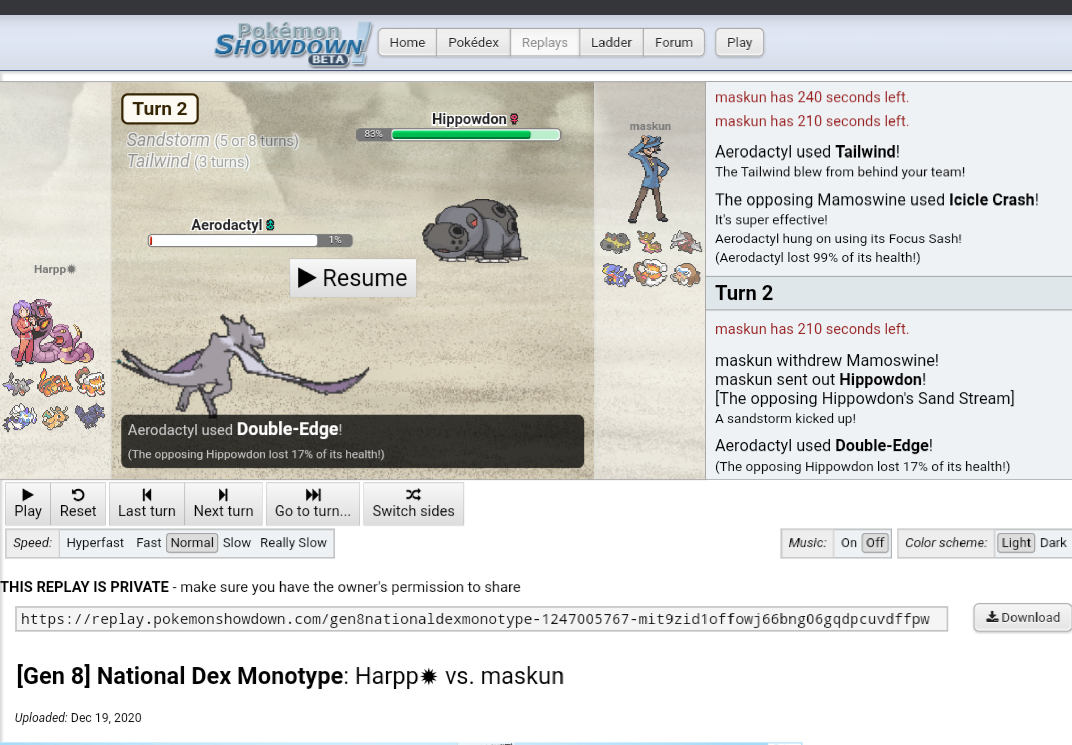 After turning on dark mode: 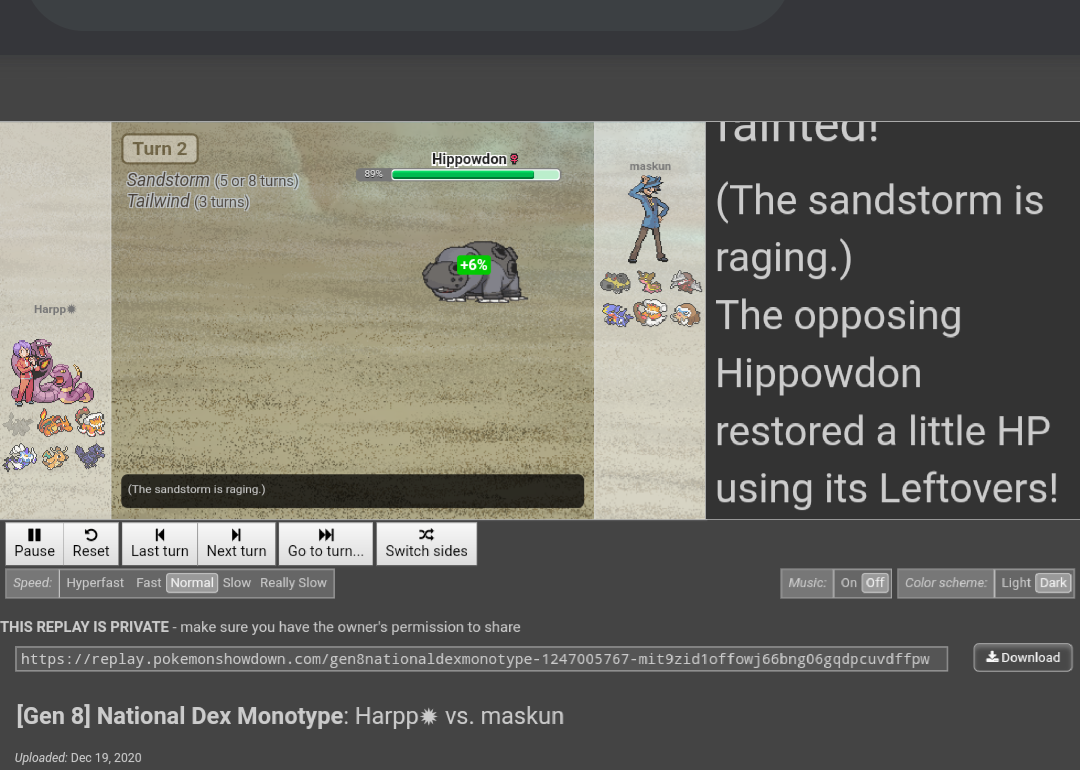 (I'm on android if it makes any difference)

BUG STATUS: CONFIRMED - CHAT (CLIENT) - I can reproduce this on Chrome on Android (DaWoblefet)
Last edited by a moderator: Dec 29, 2020

I thinks this is a bug.
The Calyrex-shadow grim neigh activated while neutralizing gas was in place.

I have the playback here

Battle started between sean66 and hespenrol_01!

The opposing Incineroar used Fake Out!
Weezing protected itself!

The opposing Incineroar used U-turn!
(Yveltal lost 16.5% of its health!)

The opposing Incineroar went back to sean66!
sean66 sent out Urshifu!

The opposing Celesteela restored a little HP using its Leftovers!

The opposing Celesteela restored a little HP using its Leftovers!

The opposing Incineroar used Fake Out!
(Yveltal lost 5.8% of its health!)

Incineroar used Flare Blitz!
It's super effective!
(The opposing Celesteela lost 11% of its health!)
Incineroar was damaged by the recoil!

The opposing Celesteela restored a little HP using its Leftovers!
The opposing Incineroar was hurt by poison!

The opposing Celesteela used Flash Cannon!
It's not very effective...
(Incineroar lost 1.8% of its health!)

sean66 won the battle!
Ladder updating...
BUG STATUS: NOT A BUG, Neutralizing Gas doesn't affect the ability As One, which is a combination of Grim Neigh/Chilling Neigh and Unnerve. (Dawn of Ares)
Last edited by a moderator: Dec 29, 2020

The command does not exist

Coalossal used G-Max Volcalith!
It's not very effective...
(The opposing Urshifu lost 88% of its health!)
The opposing Pokémon became surrounded by rocks!

The opposing Amoonguss used Energy Ball!
It's not very effective...
(Dragapult lost 14.0% of its health!)

The opposing Urshifu fainted!
According to Wolfe the G-Max Volcalith damage should be happening before the Black Sludge recovery.

I was playing a game of SS OU today when I saw an opponent with a shiny Urshifu. Knowing that Kubfu and Urshifu are shiny-locked in-game, I went to the team-builder to see if it counts as legitimate. Sure enough, it says it's valid, even though a legitimate Urshifu can NEVER be obtained shiny as of writing this post. 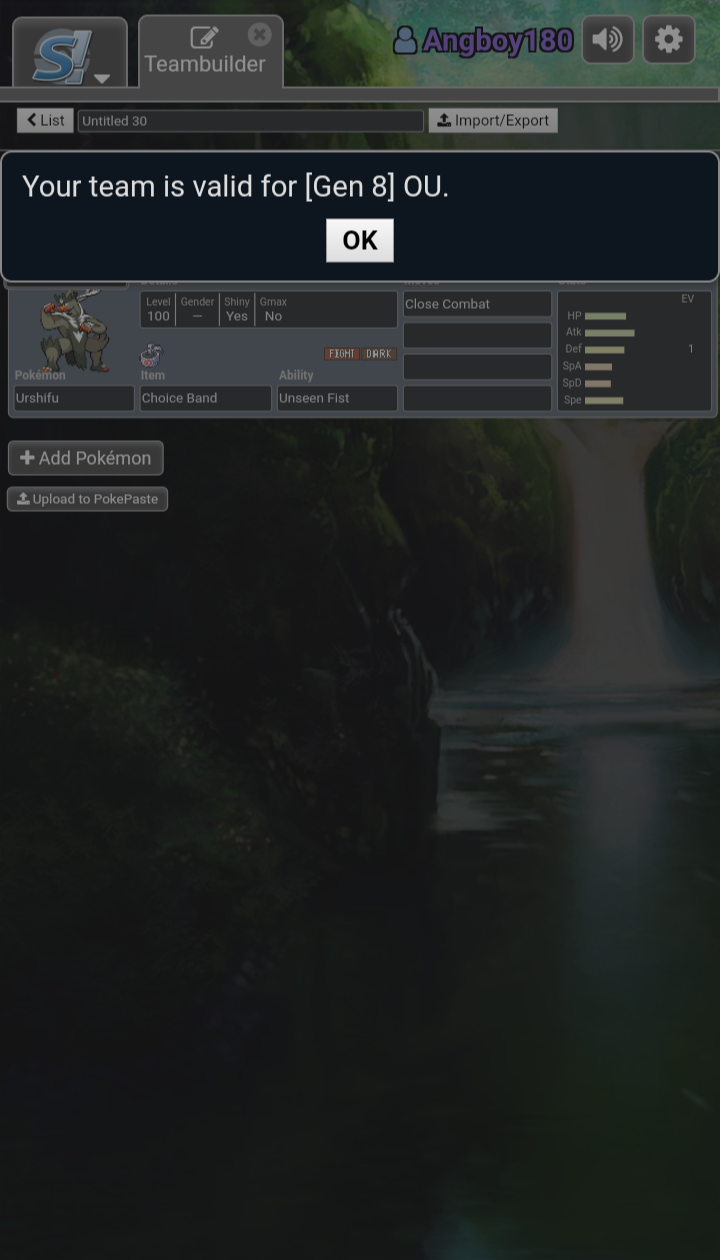 In this battle, on turn 5, Yamask-Galar has already cursed Dusclops.
Yamask-Galar, with 5%HP, uses Curse again against protecting Hatterene.

Should Curse hit Hatterene through Protect, and Yamask-Galar should faint?

EDIT: Is it better to merge new bugs into my original post? Or a new post for each bug?

BUG STATUS: NOT A BUG, As said below by M24, Ghost-type Curse selects a random foe in double battles, which means it can target an already cursed Pokemon, making it fail. (Dawn of Ares)
Last edited by a moderator: Dec 23, 2020

This is the most likely answer to your question from bulbapedia:

Gen 8 Addition:
"Ghost-type Pokémon are no longer able to choose targets for Curse in a Double Battle, and will always attempt to inflict the curse on a random opponent. "

You probably cursed the same pokemon a second time, unless showdown does not implement this new gameplay addition.

M24 said:
This is the most likely answer to your question from bulbapedia:

Gen 8 Addition:
"Ghost-type Pokémon are no longer able to choose targets for Curse in a Double Battle, and will always attempt to inflict the curse on a random opponent. "

You probably cursed the same pokemon a second time, unless showdown does not implement this new gameplay addition.
Click to expand...

Maybe I have been very lucky (or oblivious), but it usually hits the non-cursed pkmn in double battles.
I wonder about this behavior in Gen7 now.

I found a bug in a Linked Metagame battle.
Prankster Dual Screens went before a faster Pokémons priority.

Please have a look.

BUG STATUS: NOT A BUG, Linked isn't supported on the main server anymore (DaWoblefet)
Last edited by a moderator: Jan 1, 2021

Hi, I hv some problem with trapping moves like jaw lock 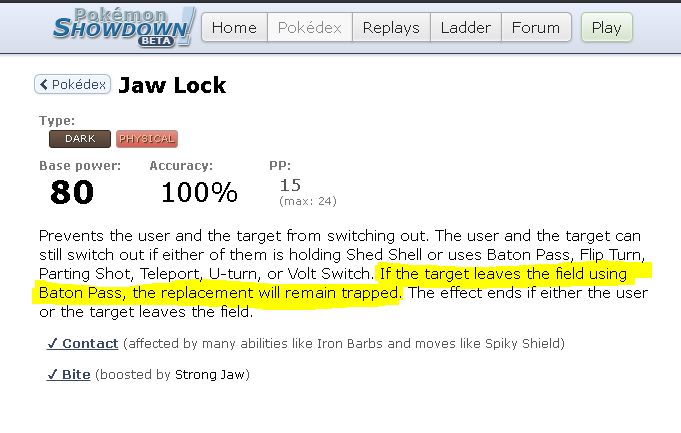 Ok but trying it in PS says otherwise
https://replay.pokemonshowdown.com/gen8nationaldexag-1248986126

1. Is it a bug with battle mechanics or showdown summary of the move?
2. If it is the problem with the battle mechanics and the above summary is correct does that mean if,
smeargle uses jaw lock and baton pass will both the opponent still get trapped? (Ik that my original question was for the target but this is for the user but I think if smeargle baton passes jaw lock the game should think the user is still trapped and so the opponent should also be trapped).
Thanks in advance :)

I was just playing an SS OU game and I went through a weird situation where the enemy Urshifu received a healing wish when the enemy Latias was dead some turns ago, im leaving the link to the replay, this happened turn 19.

BUG STATUS: NOT A BUG, Healing Wish doesn't activate until it can heal a switched in pokemon in gen 8, and stealth rocks damage comes after healing wish. (Dawn of Ares)
Last edited by a moderator: Dec 23, 2020

nachoboro said:
I was just playing an SS OU game and I went through a weird situation where the enemy Urshifu received a healing wish when the enemy Latias was dead some turns ago, im leaving the link to the replay, this happened turn 19.

This is due to the new Healing Wish mechanics in generation 8.

Healing wish will now become "stored" and only activate once a pokemon that is not at full health is switched in, disregarding hazard damage.

Unfortunately, I was not able to save the replay, but at one point my Zoroark was hit by a future sight while disguised as a Regieeleki. I know that Future Sight accounts for type matchups, so I can only imagine that this was a bug.

BUG STATUS: NEEDS MORE INFO, It was possible that the Zoroark had ring target, but a replay is required nonetheless, as Future Sight works fine. (Dawn of Ares)
Last edited by a moderator: Dec 24, 2020

(using clayrex in natdex ag) the reason that you can only have one calyrex does not make sense, you keep the reins of unity and you can if someone else got the other form (your alt or something) just split that one with the reins and then trade both, then you fuse them on the main account and you got 2
i did this in my game so i know it works, for proof, please reply here so i can tell you or pm me on ps, (name: Acces Ark)

https://replay.pokemonshowdown.com/gen8ou-1249549758
Flying Press isnt supposed to be SE against Ferrothorn im pretty sure.

BUG STATUS: NOT A BUG, Flying press does both flying and fighting type damage against a Pokemon. Since Ferrothorn is neutral to Flying and weak to fighting, it will be weak to the move. (Dawn of Ares)
Last edited by a moderator: Dec 24, 2020

Bulbapedia says this for Gen V onward though
It now inflicts damage as a Psychic-type move; therefore, it is affected by type effectiveness (so cannot affect Dark-type Pokémon)

It also says that Electrify (and I guess it includes Plasma Fists) would turn the move into an Electric type move, which can therefore hit Zoroark for neutral damage.
Last edited: Dec 24, 2020

In Metronome Battles, I've been using the abiility Magician and noticed that it always stole the enemy's Weakness Policy before it could activate. Bulbapedia however states that consumables that are triggered by the Magician mon's move are consumed before they can be stolen, so unless Bulbapedia is wrong, Magician is bugged right now.

In addition, I had Magician friendly-fire when my Magician mon used Brutal Swing, hit all other pokemon including its ally, and then stole its ally's item instead of stealing the item from one of the enemy mons, but I don't know if that is a bug.

BUG STATUS: NOT A BUG, allies are evaluated first for things like this (DaWoblefet)
Last edited by a moderator: Dec 29, 2020

This one's a visual bug: I noticed that the back model for shiny Togedemaru is stretched. 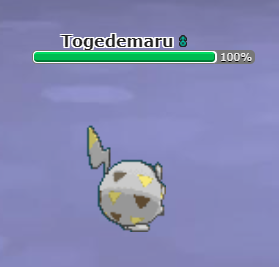 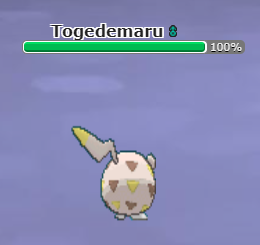 Is it normal that Urshifu has 4 speed and no typing ?

Ps : I can't show my screen idk why

BUG STATUS: NEEDS MORE INFO, A screenshot and replay would be needed. (Dawn of Ares)
Last edited by a moderator: Dec 26, 2020

BUG STATUS: NEEDS MORE INFO, like a screenshot or replay (DaWoblefet)
I have a reaply i dont know how to send a screen shot so the glitch is that if a battle ends and one of the trainer leaves and enters and had automatic timer on automatic timer will be on but it does not affect the game so its not a big problem https://replay.pokemonshowdown.com/gen8randombattle-1252092539-yqtht6kc4bn6tysbo9xwmgn96ozp2xkpw Battle
Last edited: Dec 29, 2020

I was taunted Turn 4, bug out happened turn 6.

Users Who Are Viewing This Thread (Users: 3, Guests: 3)