Rattata shiny male sprite is also incorrect for the same reason. Outside of the ratatta line, the other gendered shiny sprites seem to be correct.

TFP & Tour Head
I don't know if this qualifies as a bug or if this is intentional, but the ladder seems to be sent multiple update requests for every ladder game that ends.

Code:
But checking the rating after the battle shows something entirely different:

BUG STATUS: CONFIRMED - OTHER, this isn't a second request - the first one is just an estimate, because the ladder is so slow anymore that it won't reasonably update before the request timeout. The rank you see in /rank or on the ladder is the only correct rank (DaWoblefet)
Last edited by a moderator: Aug 26, 2022

If this post is in the wrong forum let me know, but I feel it fits best here.

As I recently discovered in a playthrough of Pokemon Pearl, Fury Cutter is not correctly implemented on PS for Gen 4. On console, its power does not reset if the user chooses another move, but on PS, it does.

I've recorded a link battle in Gen 4 (apologies for the potato quality) and a PS replay to demo this discrepancy. The stats of all Pokemon are identical in both of these, Gligar having an Attack of 43, and Slowbro a Defense of 114. 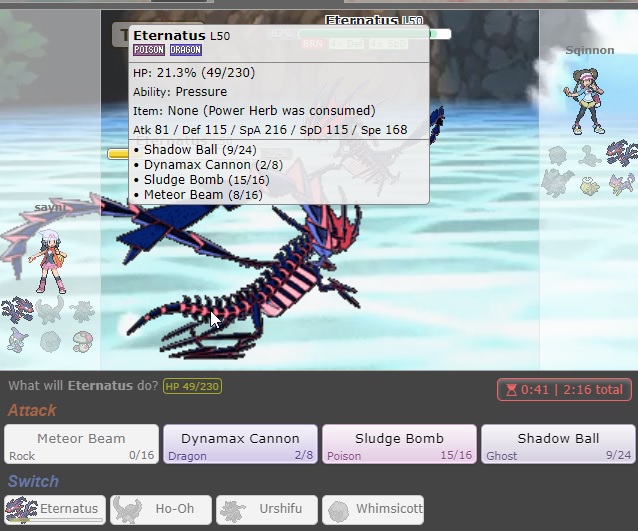 Two turn moves counter is showing incorrect PP number against pressure ability. As you can see meteor beam has no more PP but if i hover over the pokemon, the tooltip tells me it has 8 more PP on that move.

BUG STATUS: NOT A BUG, in doubles, you can't assume what the target of Meteor Beam is on the initial turn, which is when PP is deducted. There's too many edge cases to accurately track this in doubles (DaWoblefet)
Last edited by a moderator: Sep 8, 2022 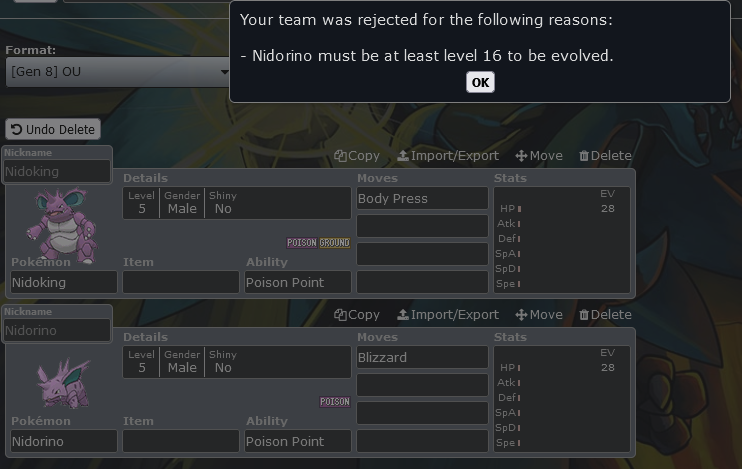 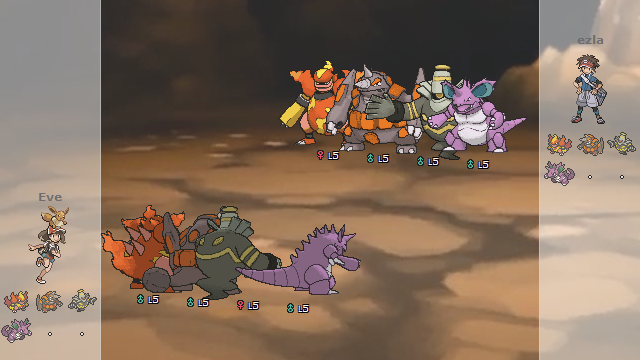 Any third stage Pokémon that evolves by non-standard means (trading, stones, other items, etc) can pass validation at any level, despite the legality of this, as they have no set evolution level to reference in the code. Here you can see Nidoking being supposedly legal at Level 5 while Nidorino is not; this is definitely not accurate to the games (either neither or both should be legal if you allow access to Pokemon Go transfers). A cheap fix to this would be to make the evo levels of these unspecified Pokemon be that of their previous evolution.

In a similar vein, it is currently not possible to validate certain Pokemon at levels below their evolution level, despite the fact that they can be accessed via certain wild encounters. See below, for example: 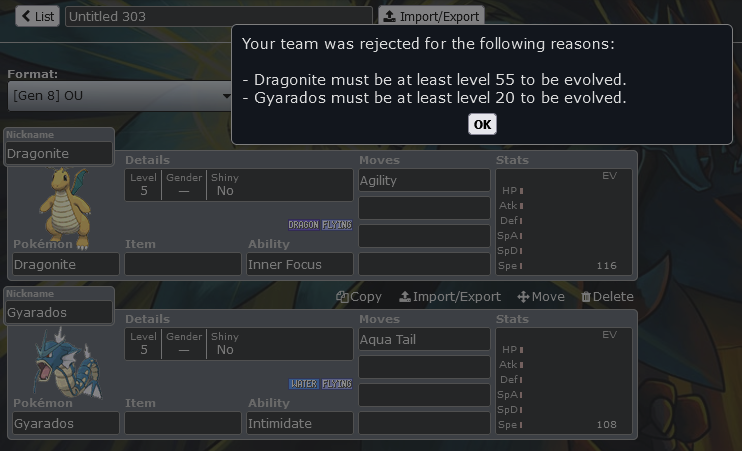 Dragonite can be encountered as low as Level 3 in LGPE Route 1, while Gyarados can be encountered as low as Level 1 in BW2's Nature Reserve. I understand that this issue ties into the one explained here though, as Pokemon Go transfer levels provide a very similar technical challenge. Perhaps linking specific old gen examples like the ones above to "events" from their generation, and then setting up Pokemon with levels only legal through Go to be considered as Gen 8 encounters, could solve this, but there's probably issues with that approach that I'm not thinking of yet.

Totally aware none of this is really relevant to any existing metagame but A) it could be one day maybe? and B) simulation accuracy good

Zoroark when hit from a dynamaxed attack through protect will keep the protect animation in front of zoroark, until it dies/switches
https://replay.pokemonshowdown.com/...-1647778034-2rll5lebai3tne2gwc1bc06ysqog1i3pw

Spider Web should have the 'bypasses Protect' flag.

BUG STATUS: NOT A BUG, it should not in fact have it, it's unlike Block/Mean Look (DaWoblefet)
Last edited by a moderator: Sep 12, 2022

According to bulbapedia " Because the stage numbers in-game have not changed, a Pokémon that uses Psych Up on a target with Simple only copies the stored (not doubled) stat stages." (i.e. psych up that steals stats after 3 calm minds should steal +3SpA +3SpD, even if the target with simple shows as if it was +6/+6). However, when testing, psych up steals +6/+6 rather than +3/+3 after 3 calm minds, most likely as an error of simple's coding. (It stores calm minds as +2/+2 for example, even if it should only be visually +2/+2 but stored as +1/+1)

BUG STATUS: NEEDS MORE INFO, the behavior you're describing is partially from Gen 4; please provide a replay of the incorrect behavior (DaWoblefet)
Last edited by a moderator: Aug 26, 2022 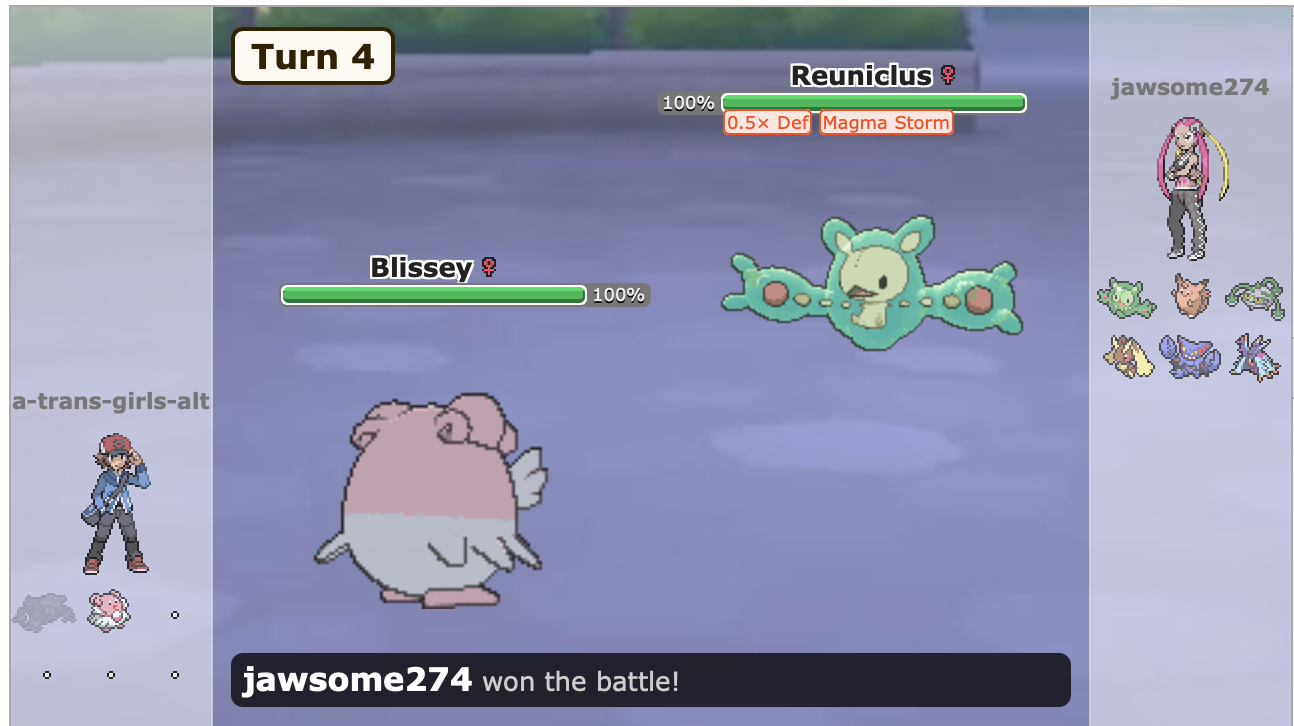 As you can see, heatran is dead however magma storm is still "active." there is still an option to switch. this only happens when heatran dies to sticky barb damage (possibly from other chip damage as well)

Hotaru Tenshi in help room pointed out some inconsistencies in Sinistea-Antique's learnset in Gen 8 Little Cup. Stored Power shows up in both's learnable moves in the teambuilder search, but Sinistea-Antique cannot validate with it. Bulbapedia doesn't seem to express any difference in the two forme's learnsets, unless I am overlooking something. bulbapedia link

this difference is also expressed in the !learn command

BUG STATUS: NOT A BUG As describes and links the next post, that's the cart interaction of selecting a status move while encored on a damaging move against a dark type (Irpachuza)
Last edited by a moderator: Aug 27, 2022

This is not a bug; Klefki selected Spikes on turn 6 and because it was forced to use Play Rough due to Encore, Play Rough was affected by Prankster (since Spikes is affected) and so Liepard was immune. Source: this post.

BUG STATUS: CONFIRMED - MECHANICS (SERVER), not only will using Gastro Acid on these Abilities in Gen 6-7 negate them, but hacked Delta Stream, etc. will be negated by Neutralizing Gas in Sword/Shield (DaWoblefet)
Last edited by a moderator: Sep 12, 2022

One more Mechanic, not sure if its a bug , but wanted to share and know for knowledge.
After using Plasma Fists, if Glare is used, it changes the Glare's normal type into an Electric Type Glare which heals the Zeraora.
However when the same is used on Hippowdon, it still Paralyzes the Hippowdown, in spite of changing into an Electric Type Glare. Showing a dual nature of the move combination. Is this supposed to happen or is this a bug?
Replay for the same: https://replay.pokemonshowdown.com/...-1650195864-ooa3v7dgse1os31k7qw85ongbvfla6dpw
Thank You!

Blimax said:
One more Mechanic, not sure if its a bug , but wanted to share and know for knowledge.
After using Plasma Fists, if Glare is used, it changes the Glare's normal type into an Electric Type Glare which heals the Zeraora.
However when the same is used on Hippowdon, it still Paralyzes the Hippowdown, in spite of changing into an Electric Type Glare. Showing a dual nature of the move combination. Is this supposed to happen or is this a bug?
Replay for the same: https://replay.pokemonshowdown.com/...-1650195864-ooa3v7dgse1os31k7qw85ongbvfla6dpw
Thank You!
Click to expand...

The PP is bugged, at least in GEN 1. Which allows you to spam wrap or any restrictive move indefinetly. It's not the first time it happens to me:

BUG STATUS: NOT A BUG This is cart behavior. See below for details (Irpachuza).
Last edited by a moderator: Aug 29, 2022

Airung said:
The PP is bugged, at least in GEN 1. Which allows you to spam wrap or any restrictive move indefinetly. It's not the first time it happens to me:

This is not a bug, this is a known Glitch from Generation 1.
You can find the article here : https://bulbapedia.bulbagarden.net/wiki/Clamp_(move)
The specific glitch information: If at such a time Clamp has 0 PP, Clamp will still be used against the incoming Pokémon. After that use, the current PP of Clamp will roll over to 63 .
Its called the Switch PP Underflow Glitch: https://glitchcity.wiki/Switch_PP_underflow_glitch

Currently, when a high level ditto transforms into a lower level pokemon it gains the stats that pokemon would have at a higher level. This is visible when L88 Ditto (as Slowbro) attacks the opposing L68 Slowbro in this replay (turn 3): https://replay.pokemonshowdown.com/gen1ou-1333298225-nju8iqn3srze9rg9od27ihcsyt8b4k1pw

Ditto is level 88 in randbats.

This bug still exists. Figured I'd mention it since this last report was over a year ago and another report of this glitch was marked "needs more info/cant reproduce".

I did a test on red to confirm it's working wrong.
https://i.imgur.com/7KjB62T.mp4
I couldnt get link cable to work on the emulator but I really doubt it works differently in a link battle.

On turn 9, i EQed the Aegislash and it said it didn't affected it, i was using gravity in the battle but it ended a couple turns before.
Do someboy can abstract what's happened?

BUG STATUS: NOT A BUG, Air Balloon doesn't announce itself when Gravity is active. Because Gravity ended, the Air Balloon became active again, but didn't announce itself. If you had ever hit the Aegislash, it would have announced the Balloon popped (DaWoblefet)
Last edited by a moderator: Aug 31, 2022

simply a visual bug, it still clears properly in room

Hi I am a driver in the OU room. Whenever there's a roomtour we want to exclude we do the command -exclude

However twice now it happened that the tour wasn't actually excluded

Both times this has happened to me I excluded a couple of times. However this shouldn't be an issue as if the tour is already excluded and you exclude again you get this

We actually tend to exclude multiple times, as not every staff knows if the tour creator remembered to exclude. This isn't a common occurrence either. Also no, no other staff included this tour nor the one it happened in before, I already checked the logs.

Felucia edit I looked into this, it happens when Scrappie disconnects during a tour. I don't have time to dig into the code and fix the root cause but if anyone ever experiences this I'm happy to retroactively exclude any tour this affected but I can't undo sending unintended friend requests while blocking

suwa said:
Hi I am a driver in the OU room. Whenever there's a roomtour we want to exclude we do the command -exclude
Click to expand...

hi I'll forward this to Scrappie's owner, this thread is for PS bug reports
Last edited by a moderator: Sep 14, 2022

I have noticed this a long time ago, but finally decided to test it out. The back sprite of specifically Shiny male Frillish is stretched, making it look bloated. Here's a replay of me testing all Frillish variants: https://replay.pokemonshowdown.com/gen8customgame-1655128203-ts9u5ggpk7igmwdqyonoqu3s21xs82rpw (watch from the Frillish side perspective, the front sprites are normal).

I believe i found a glitch regarding aegislash using sleep talk while in shield form to call an attacking move. Bulbapedia says doing so doesnt change it to blade form, but in nat dex gen 8 uu it does change it to blade form
https://replay.pokemonshowdown.com/gen8nationaldexuu-1655502421
https://bulbapedia.bulbagarden.net/wiki/Stance_Change_(Ability)
(on stance change page) Moves that call other moves, such as Sleep Talk, will not change its Forme, even if they call a damaging move or King's Shield.
https://bulbapedia.bulbagarden.net/wiki/King's_Shield_(move)
(on kings shield page) Stance Change does not change the user's Forme if King's Shield is called by another move, such as Sleep Talk.

BUG STATUS: NOT A BUG, Just tested this myself, and Bulbapedia is wrong. Aegislash went from Blade forme to Shield forme after using King's Shield called by Sleep Talk. (Karthik)
Last edited by a moderator: Sep 3, 2022