i'd like to have the T in eht capitalized, so it is spelled ehT. That is how i have it stylized on ps

i would also like a dob change from 95 to 96 (11 Sep 1996). i was 17 when i made this account and didn't know if there'd be any repercussions for being under 18 aisfldkgiusfdgjk

Hello, I'd like to have my name changed to Twilight Solace. While Mr. Abby did serve me quite well for some time, it's gotten annoying having people call me Mrs. Abby every so often, especially since I'm a male, so I'd please like to avoid that from now on, with the name change.

Please change back to Steve Angello =)

Eien: that name is taken, can you choose another one?
Last edited by a moderator: Jun 28, 2019

Hey, i'd like to change back to my original name, it was "davidTheMaster" is it possible? thank you

Requesting to change the L and first P in my name to capital letters.

Requesting DOB change from 1990 to 12 Jan 2002, was originally trying to avoid age restrictions

May I request a DoB change to 1999. I was an edgy 16 year old who wanted to look like an adult when I made the account...

Hello request a name change to "Winkata" (whitout " ") since it's the name I am using on PS and other pokémon web site so it will be easier for people from Showdown! to recognize me on Smogon and vice versa.

It's been almost 3 months since my name changed, unlock my profile please ;)

Requesting my birthday to be changed to April 23rd, 2001. It currently has the wrong year in my profile

yo i want to change my nick to Yuji, cause i think ''yuji'' is better than ''yujiii''

Eien: that name is taken, can you choose another one?
Click to expand...

Eien: no. No annoying text

x_x I apologize "ElectricityCat" should be right.

Hello sorry to post here again but the T and the W in my nickname should be reversed since the name change requested was Winkata. 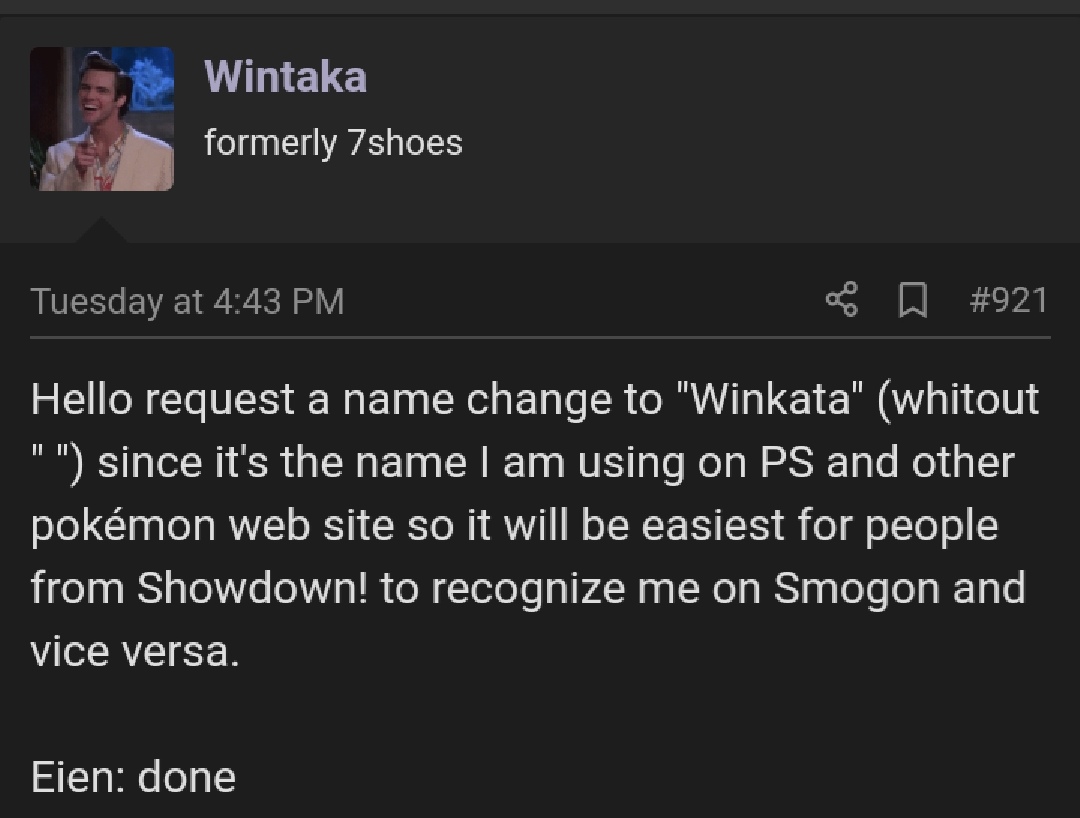 Eien: sorry for the inconvenience. Fixed

I would like to change my name to Onyx Burst

I realize I haven’t hit the post threshold, but I want to more active on the site and I know alt accounts are against the rules. I am asking because it seemed easier to change my name now instead of people getting use to an outdated name then switching real quick.

Lastly, I would like to request a profile change. My birthday should be March 7th, 1996. It currently has the wrong year in it.

this is a valid point and i'll bring it up, gonna leave your name as if for now though to enforce the same rules for everyone
changed your bday--tdp
Last edited by a moderator: Jul 11, 2019

requesting name change to eden95, i think my current name is a bit unwieldy to type out, and would prefer something shorter and more compact; i own the alt eden95 on ps/use it on discord, i realize i've had a couple of name changes before, but i think this is close enough to be fine; if its not allowed at all that's fine too though

are you sure you wouldn't rather have eden? we don't like giving ppl names with numbers because they always end up hating them soon after + eden would actually be a straight abbreviation + it's available to take for badgeholders

edit 2: yo i'm fine w eden95 if you guys are, just eden's a bit plain, i understand if its a policy not to allow numbers tho, dw i won't end up hating it

Requesting to change my name to Hockey1 because its cleaner and just overall what I prefer I own this name on ps.

requesting profile/birthday change, would like to change my birthdate to january 26, 1999. thank u.

requesting change to just "Boat", it's my name on discord and everything other than PS and people call me boat anyway.

does this count as "removal of numbers or other distracting text (eg. tennisace0227 -> tennisace) will not count as a name change" cause if not then I have not hit 100 postings and I apologize.

edit : apologizies, I tried to search for that name but I didn't find anything so I thought I was fine.
Last edited: Jul 13, 2019
You must log in or register to reply here.
Share:
Reddit Pinterest Tumblr WhatsApp Email Link