I don't have any experiences with Mega Diancie yet.
On Paper it looks too much for the UU tier in my eyes. Especially the Calcs, which was brought up by Brandon~ seems to me, that Mega Diancie is a really powerful threat in the UU tier. It has also so many Sets it can Run:
Sub-Endeavour
Offensive Mixed with Diamond Storm
Hidden Power [FIRE] to catch probably his best Counter aka Scizor.
It is kinda a guessing game, which Set you face. Scouting is not that easily either by those offensive Stats Mega Diancie offers.
I would tend to a Ban on it for now.

Mega Venusaur on the other hand is also kind of broken-ish. The offensive Sets didn't get explored yet, but the defensive Sets are rather painful to face.
From Bulky Offense, Balance to Sei-Stall / Hardstall, Mega Venusaur offers those Team Archetypes a very good defensive Slot in this place.
I have a good experience with the Leech Seed, Sythesis, Sludge Bomb and Giga Drain Set so far with the investment concentratet around it's super good bulk, which gets topped by his Ability Thick Fat.
I think as a defensive Factor Venusaur-Mega is a really great mon in the UU-tier.
I would say it is really really good at what it does and is supposed to do.
For me there is def. no doubt, that this PKMN can have a really good presence in the Uu-tier, but as bsu already mentioned it has a broken factor.

Mamoswine and Amoonguss are fine in the tier, they were in the tier before they went to OU and they didn't show a overwhelming presence here in UU.

bsu said:
loved reading this thread so far, probs not the right place to ask but to clarify, the UU open rounds this round is using the tier pre-shift right?
Click to expand...

Yes, the UU Open R2 is using the tier before these shifts (probably a good thing because Diancie is broke). This means no Diancie, Amoonguss, Venusaur, or Mamoswine, and we can use Serperior and Gliscor.

What's the point of talking if nobody ever listens

I have to agree with Brandon. I Honestly like Diancie stall better than Venu stall. On stall teams Venu can be replaced with Amoon to an extent, and that frees up your mega slot. Diancie with its fairy and rock typing provide a lot defensively and offensively for stall. It helps beat the 2 more prominent stallbreakers in workup pidge and np togekiss with diamond storm. It also has access to plenty of support moves in stealth rocks, heal bell, and endeavor if need be. Heal bell frees up a slot on blissey to run something else like wish. Personally I've played with Mvenu And Mdiancie stall and I have to say I found Diancie stall more consistent for me. That's just my anecdotal 2 cents.
Last edited: Jul 20, 2018

While everyone like Brandon~ and Explodingdaisies is bringing up Diancie stall, I'd also like to make a couple points on it.
Diancie's Magic Bounce helps Stall in a major way: Beating Nihilego.
Nihilego is a major problem for stall since none of it's cherished defoggers can really defeat it.
While not a defogger, Diancie is a method of beating it out that can repel it's hazards.
No hit from Nihi is defeating a Diancie in a single hit. Diancie can use this to check Nihilego by running Earth Power or Psyshock (I'm more biased to Earth Power since you can also put a big dent in Lucario, another problematic stallbreaker) while bouncing it's hazards back.
Diancie can also add more depth to stall by making every hazard setting turn a 50/50 when it's mega evo'd, a 50/50 that some of the more ballsy stall players may take in a tight pinch.
Last edited: Jul 20, 2018

I'll start off with some announcements about council: first, Sacri' officially stepped down from council, and has been replaced by Sage. Welcome!

Second, HT requested to abstain from this council vote. In order to keep things at an odd number, we added Adaam as a rotating council member for this vote. Thanks to Adaam for stepping up for this vote.

Alright, time to stop burying the lede. The UU Council has voted on Diancite and Venusaurite, and has reached the following conclusions:

The votes themselves can be seen here: 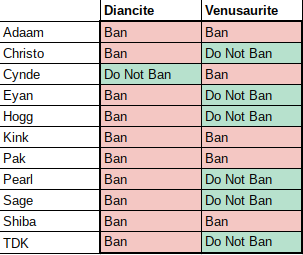 The Immortal and Eyan, please ban Diancie-Mega from the UU ladder.

So what is the next step? After discussing this with Pearl and the council, we believe the best next step is to hold a public suspect test for Venusaurite. Expect some more news about this suspect test in the next couple of days as we hammer out the details.

Thanks to all who have contributed their thoughts on the meta so far.

Congrats Sage and thank you for all of the help that you’ve given me.

Well, it has been fun, Mega Diancie!

This is a bit late but better late than never. I have been trying Mega Diancie on an Aurora Veil-based team I thought I'd share because it can't be used anymore.

Mega Diancie has worked really great for me under Aurora Veil. Thanks to its ability Magic Bounce, opposing Defoggers can't remove Aurora Veil. Furthermore, Aurora Veil in conjunction with Calm Mind and Psychic allows Mega Diancie to set up on Mega Venusaur and Amoonguss and beat them if it sets up on their switch-in.

All in all, I am glad Mega Diancie was banned because it really was too good for the metagame.

As for Mega Venusaur, I don't have much experience with it but as of now, I honestly don't think that it is broken or unhealthy - I see it as just annoying if anything. I think that its best set is the specially offensive set with 3 attacks and Synthesis. As for the defensive set, I honestly don't really like it and I'd just use Amoonguss over it. Amoonguss has Regenerator, access to passive recovery, and most importantly - it does not take up a mega slot. I dislike its physically offensive sets too, especially its Curse set, because for the cost of beating stall teams it is countered by the kinds of Moltres and Latias, both of which normally only hard check it.

Regardless of its set, I found Mega Venusaur actually not that hard to be taken advantage of. VoltTurn, a not unpopular playstyle, uses Mega Venusaur to grant "free" turns to wallbreakers like Moltres, Latias, and Crobat, thanks to Volt Switch and U-turn users that Mega Venusaur normally beats, such as Rotom-Mow and Scizor. Furthermore, Mega Venusaur relies on Synthesis to stay healthy, which can be very easily taken advantage of by offensive teams. As for slower and bulkier teams, Mega Venusaur finds it really hard to break through its staples, including Crobat, Amoonguss, and Blissey.

tl;dr: In my opinion, Mega Diancie indeed was broken and Mega Venusaur has a place here in UU.

Sage it up. And Adaam it up too!
Ty council for being prompt, good bye Sacri' we won't forget your contirbutions >:

Here's to hoping we can ban the Mega Dino too~~~

sorry the picture was too disturbing so i googled another one: 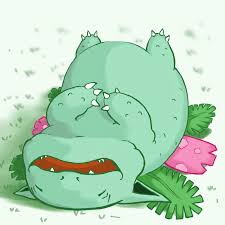 Moderator
The most well deserved addition to council, Sage you didn’t ban Mega Venusaur but you’re still a damn good mons player and an even better friend <3. Congrats to the most handsome man on Smogon Adaam for becoming a tactical council sub.

Mega Venusaur was a tight vote so how about some more difficult reqs to make sure we have the best and brightest deciding the fate of the tier. Thanks Hogg for all your hard work!
Last edited: Jul 22, 2018

itsjustdrew said:
Mega Venusaur was a tight vote so how about some more difficult reqs to make sure we have the best and brightest deciding the fate of the tier. Thanks Hogg for all your hard work!
Click to expand...

Ya know, I always wondered why we don't have a tour to determine this type of stuff. People who make it to the top 16 or top 8 get to vote alongside council. Person who wins the tour gets voice or something (maybe even getting the chance to vote in the next quick ban test if there is one).

At least this way you don't have to time when you should ladder or use multiple alts or whatever. This way, only the best come out on top. Also, I have a feeling ladder tests just allow in people who have odd teams that work against most ladder players to come out on top. In a tour setting, we get to see if those teams really are legit or not. As well as certain odd sets (like curse, amnesia Mega-Venasaur).

tmacbalanced said:
Ya know, I always wondered why we don't have a tour to determine this type of stuff. People who make it to the top 16 or top 8 get to vote alongside council. Person who wins the tour gets voice or something (maybe even getting the chance to vote in the next quick ban test if there is one).

At least this way you don't have to time when you should ladder or use multiple alts or whatever. This way, only the best come out on top. Also, I have a feeling ladder tests just allow in people who have odd teams that work against most ladder players to come out on top. In a tour setting, we get to see if those teams really are legit or not. As well as certain odd sets (like curse, amnesia Mega-Venasaur).
Click to expand...

I mean, a tour gives a person only one shot to get to the top (and vote). Especially in pokemon you can just get lucky and hax out a potentially better voter. With the reqs you can bypass hax with the amount of games you're able to play

Yeah, in general I don't like suspect tours for a couple of reasons. Unless the tour is huge (far larger than suspect tours for lower tiers typically are), it means you can get voting reqs off of winning 4-6 games, which can easily happen because of matchup or luck. I mean, I can point you to times when UU folks got voting reqs in some OU suspect tours despite meming the entire time with a UU team. You also end up with an incredibly small pool of voters at the end (unless you expand it to something like top 8 from each tour votes... but that makes the aforementioned issues even more pronounced). Finally, it makes the suspect process a LOT longer. You need several tours to have a good sample size of voters, and they either need to be live tours (which means you can run at most 2-3 aweek if you expect to have any decent participation) or else be forum tours, which take one week per round to run.

Suspect ladders aren't perfect, but of all the systems I've seen proposed, they strike the best balance of vetting voters while still maintaining community involvement with the suspect process.

Can we get a bit more reasoning on the Diancie ban please? I didn't find it broken.

I posted my thoughts earlier, but most of the reasonings I've seen basically boiled down to two main issues...

The ability to 2HKO a huge chunk of the tier combined with a really good Speed tier, solid defensive typing and non-terrible bulk made Diancie an extremely low-risk, high-reward 'mon, and most of the council felt it was unhealthy for UU.