I've looked over some of the arguments made at the time for an evo mon, and they are solid reasons. I can't claim to be a huge CAP member but I've always been peeking in. However with the introduction of the Mega Stones I do think there is a viable way to keep such a project competitive in nature as per the ideals of CAP. Lets review everything that can be changed in a Mega Evo

Suddenly the fanboyism of upgrading a mon can be put in check, you can only raise stats so high, and the most difficult change is that there can only be one Mega ability. As some players have discovered as well, sometimes the mega form just isn't as useful because they lack those leftovers/choice items they loved so much. So a CAP-mega could go into two routes, one where the normal and mega are both useful (Ttar/Scizor), or one where the mega is meant to bring the mon to OU (Absol/Kanga).

It might be an interesting experiment and I'd be interested to see how a mon that already exists could be upgraded by us.

I can confidently say that the topic of Mega Evolution will be discussed in the upcoming PRC session. Feel free to apply for it if you'd like to put in your 2¢.

Creating a CAP alongside its mega evo could be interesting, though. The response was pretty lukewarm last time the idea came up in #cap as I recall but I kinda like it, even if it does violate the in-game precedent that there are no gen 6 mons with mega evos. In-battle forme changes are something that keeps being proposed for CAP that we've still never done, mostly because all previous ones involved a Pokémon-specific move or ability which we don't do, but now there are a whole bunch of Pokémon that transform in the same way.

Whether either of these are even allowed is a PRC issue, of course, and honestly smart money probably goes towards neither of them being allowed, especially for CAP 1.

I wonder if if a pokemon seems to be similar to another one, you could submit art specifically to make it look like the evo of something.

DHR-107 said:
They will likely never be implemented unless a huge change of heart is taken by both the PRC and the CaP Leadership team.
Click to expand...

Hmm, I wonder how many of them have potential with Eviolite.

Luigifan said:
Hmm, I wonder how many of them have potential with Eviolite.
Click to expand...

I currently know one who might have any potential with Eviolite, and that would be Scratchet (Tomohawk's pre-evo) with Scrappy, in the non-existent CAP RU or NU.

Magical Manticore said:
I currently know one who might have any potential with Eviolite, and that would be Scratchet (Tomohawk's pre-evo) with Scrappy, in the non-existent CAP RU or NU.
Click to expand...

Moderator
A small gift to Kadew and her design. :) Would it be okay to discuss what the 20th CAP will be like, even though we haven't even started Kalos CAP 1 yet? Even though it will most likely end up like any other CAP, I'd like to see a CAP Uber eventually.

Magical Manticore said:
Quanyails your sprite of Kadew's design looks very cute. I'd like to see your interpretation of Ampeater's pre-evo, Snoutlet.

Would it be okay to discuss what the 20th CAP will be like, even though we haven't even started Kalos CAP 1 yet? Even though it will most likely end up like any other CAP, I'd like to see a CAP Uber eventually.
Click to expand...

I actually have an idea for that - an ultimate disruptor 'mon that can allow you to literally take control of an opponent's 'mon. To keep things reasonably fair, the hijacking move would have relatively low accuracy (equal to Hypnosis), but the 'mon would also have a bunch of other disruptive moves. I don't want to go into too much detail here (if only because it would create a massive wall of text), so you can see my idea here. (And, yes, this is a concept I've wanted to submit to the CAP project ever since the days of Diamond and Pearl.)

anyone have favorite CAP ideas? a personal favorite of mine is fast, frail, electric/fire wolf with speed boost.

protean defender iguana would be neat too, like a physically defensive malaconda.

anyone have favorite CAP ideas? a personal favorite of mine is fast, frail, electric/fire wolf with speed boost.

Protean and Speed Boost seem to be on the Ability Banlist if I recall correctly. Canine Fakemon tend to be overused in the flavor department.

My favorite idea was this Water/Fairy Pokemon which resembles a Selkie, and its stats reflect a physical Jellicent with a bit higher HP. It has better Special Attack to utilize Scald, and its Abilities are Natural Cure, Hydration, and Damp.

Even though I've asked about a CAP anime before, would a single 20-30 minute long CAP movie work better than a full anime? I could tell a story about the historical playtests in an animated form, or even write an entirely new story. The problem is that I don't know how to animate to save my life!
Last edited: Jan 21, 2014

It's been almost 3 years since Scratchet was created..... 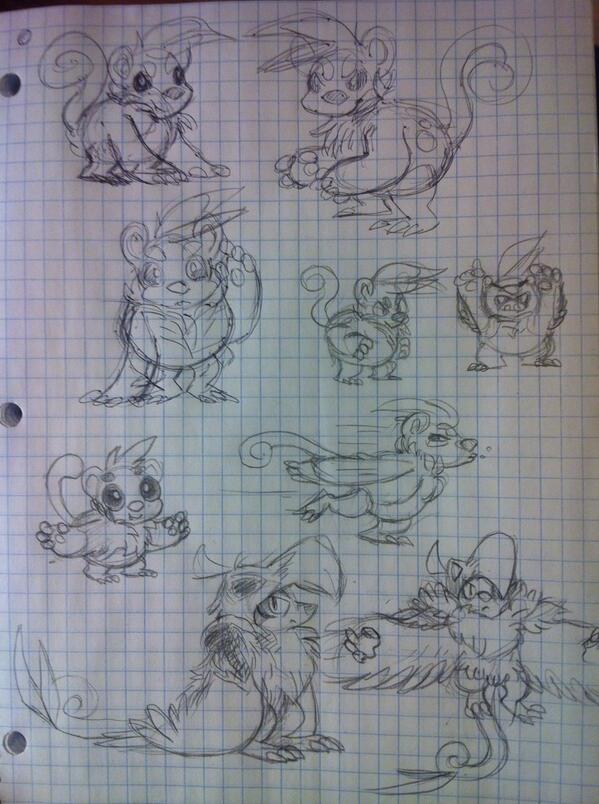 The Scratchet just above the Tomohawk on the left is using Baby-Doll Eyes isn't it.

While I was taking a walk on my way home, I sort of thought up this stupid crossover between CAP and Twitch Plays Pokemon.

Feel free to discuss each character's placement as whatever CAP there is. An original Trainer design to replace Red would be appreciated.

The trainer design could also be useful for my CAP-related fake movie poster. I call it a fake movie because CAP focuses mostly on the video game aspects, even in this flavor thread, but the poster will be a real drawing.
Last edited: Mar 8, 2014

Some people told me I should post this here: water heater cat was super cute duh ;A; why didn't it get to the final poll WHYYYYYYY yilx no that art will make me cry