Welcome to the eighth edition of Ubers Premier League, an all-Ubers team tournament where team managers draft from the pool of players to compete in a now seven-week round-robin battle for Ubers supremacy. The top four teams will advance to the playoffs, where the winning team will be crowned the premier of Ubers battling. This is Uber’s largest team tournament and our premier tournament providing an opportunity for Ubers powerhouses to display their dominance, veteran players to return, and for new talent to emerge.

Hello everyone, my name is Minority and I’ll be your host.


Some of these will be repeated under their respective topics, but in general:

1. Managers are allowed one (1) Assistant Manager.
2. Managers and Assistant Managers may self-purchase prior to auction for 20,000 credits each.
3. Teams are allowed to purchase a maximum of two (2) retained players from last year’s UPL.
4. There will be eight (8) starters and two (2) substitutes: the minimum number of players on a team is ten (10).
5. The maximum number of players on a team is twenty (20).
6. There will be no midseason.
7. Just as with SPL there will be a severe penalty for any team that picks up a known alt of a banned player, or any player masquerading as another person. It is important to establish that both parties will be penalized immediately and appropriately if they are found doing so.

The teams and managers this year are:

The tiers that will be featured this year are:

The intent to retain a player must be communicated to the UPL host prior to auction. Players may only be retained by the team that holds their retention rights (this is usually the team they played for last season). Retention prices will follow current SPL rules: this means the cost of a retention is that player’s last season price + 3,000 credits times the number of years they have been retained, with a minimum cost of 10,000 credits. A manager can purchase a maximum of 2 players through retention. Players must make a signup post and provide consent to the UPL host before being retained.

The intent to trade a player or a player’s retention rights must be communicated to the UPL host prior to the start of Week 1, and in the case of retention rights, prior to auction. Trades will not be effective until the host receives identical confirmation from both managers.

The tournament will have eight teams playing each other in pools to determine seeding. The top four seeds will advance to playoffs. Each week teams will either earn 2, 1, or 0 points based on a win, tie, or loss respectively. Battle difference will be cumulated for the purposes of tiebreaking seed placement when points are equal. If a tie occurs in seeding, or in semifinals or finals, the winning team will be decided by a tiebreaker.

Managers must notify the UPL host in order to make a substitution. A particular slot may not be substituted more than once per week.


We reserve the right to judge any individual match on a case by case basis, regardless of assumed precedence set. If you don't like that, you are welcome to not play. Be aware of this.

To help handle all DC cases you will need to submit your teams to the UPL host before the match. You do not have to submit, but if you do, you protect yourself from the opponent taking a win. It's a simple procedure that removes most subjectivity from a decision regarding a DC. Unlike with the scheduling restrictions, all you have to do is submit the team you are using at anytime before the match takes place. Read this rule and understand this now before you join the tournament. Since I'm stating this now, I'm basically going to ignore you if you DC, didn't submit a team, and "had a guaranteed win." Expect it. Also note that I'm going to let the player (not the team), decide whether he is going to take the win or go another route (replay same moves, replay different teams, etc.).

A replay / log must be saved of your match or it will be considered invalid. No exceptions.

General tournament rules and regulations apply. Pokemon Showdown is the default simulator for all metagames unless both parties agree. If you play on anywhere that isn't PS! you must save a log of the match. All matches are best of one, except for the wild (potentially).

Glory be to the The Burning Red White Kyurems! Long live our proud team!

May the mountains and the seas bow before The Burning Red White Kyurems!

And last, but certainly not least...

GLORY BE TO OUR IMMINENT VICTORY! If you would like to tryout for the Defiant Durians, feel free to dm me/Enzo or our 8 other managers byronthewellwell rozes Alpha Rabbit Kushalos Vileman blarghlfarghl belvin KratosMana for a tryout!

I sadly announce I no longer form part of the managers. Do pm long time uber player and contributor blarghlfarghl though

Also i wont play upl this year. . . have fun everyone! Hoping to see some great replays after the tours done

If you don’t mind being on the squad, just go ahead and angry react this post. Make me proud. And anyone who is hesitant to angry react, let me give you peace of mind by letting you know that this is a Highlord-free environment.

Delta Rayquazas will be doing tryouts, feel free to join and hang around in our server here.

Big thanks to LYD for the logo! 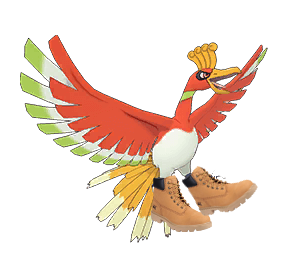 Server for the weeb team!

Tryouts and jerking: https://discord.gg/mXH8Aer - do not ask for games, not doing tryouts until DLC release
Last edited: Jun 14, 2020

STAY AWAY FROM THE WEEBS, they endorse highlord!!

instead, join the dapper Dracovish
https://discord.gg/HvV57v

Ubers Leader
feel free to hangout in the immortal drizzlers server (circa upl 5, rip #drizzlers) - we'll be taking tryouts and all that related good stuff a few days after the dlc releases. If you would like to be a part of the 3-time, undisputed defending champions The Defiant Durians, please message our tryout commitee on Discord:
Skysolo#0891
Enzo Gorlami#5701
Last edited: Jun 16, 2020

Join the Manly Melmetal discord now !
You'll get chances to tryout and impress Alkione and me :)

Totally worth drafting, totally motivated and of course, totally not excommunicated from the worst community on Smogon for a reason. 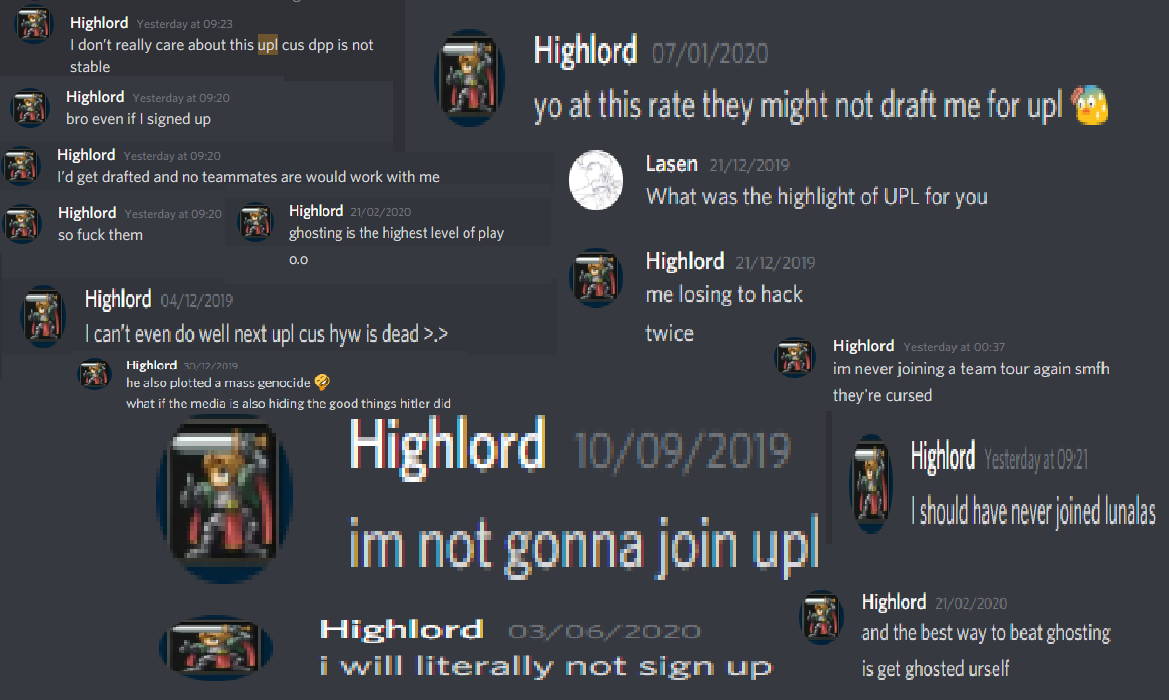 Djokra will be my assistant manager for the tournament.

in the words of Pohjis: BIG NEWS 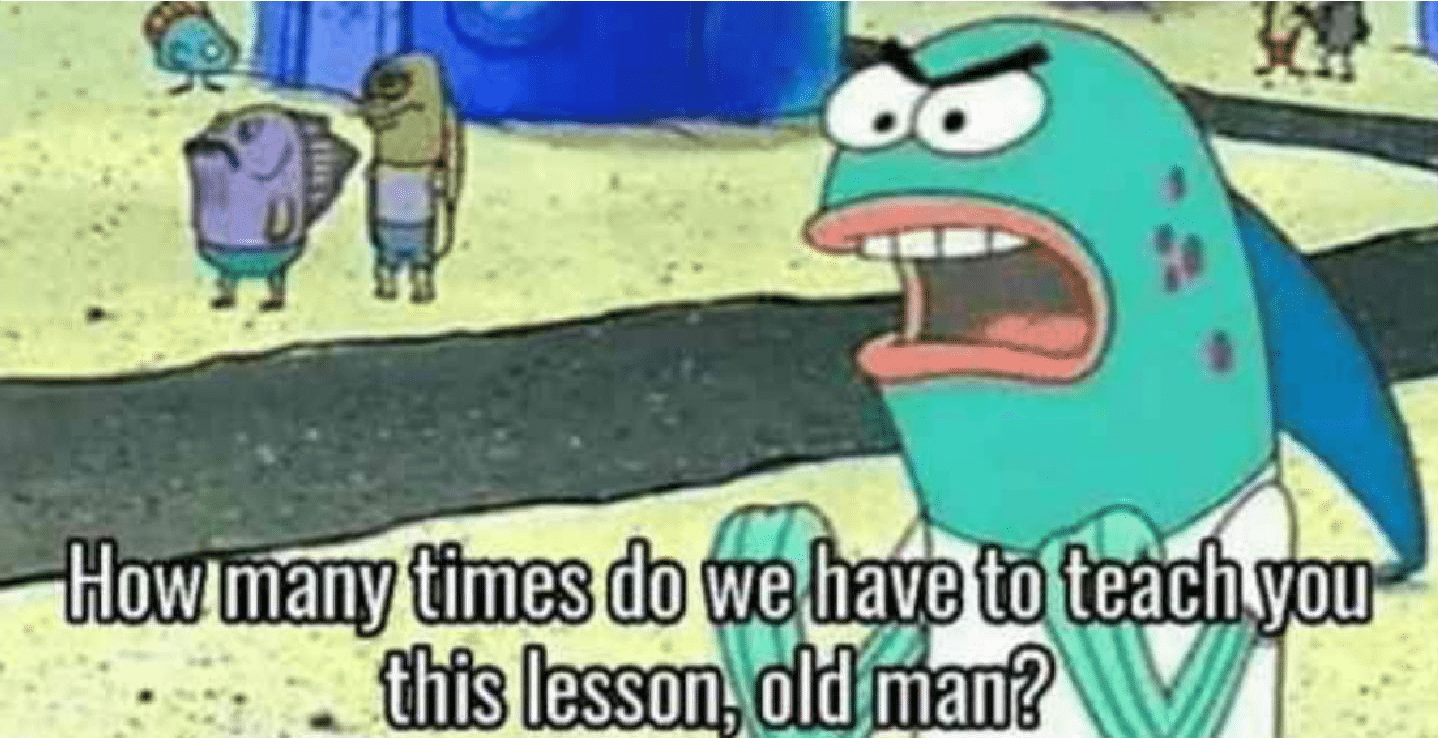 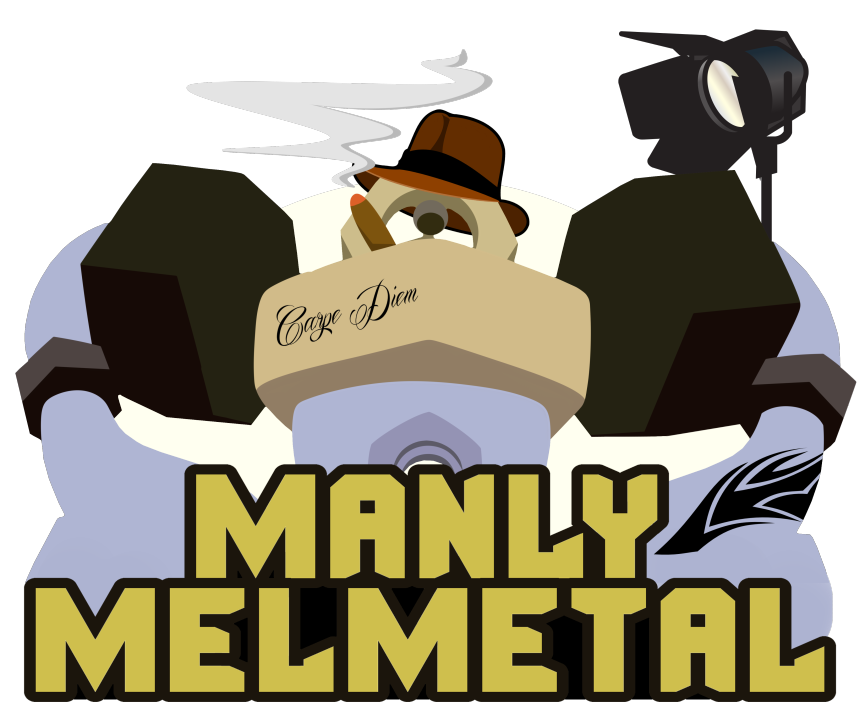 Big thanks to Kei Kikuno for his work !

High-quality TL;DR of week one 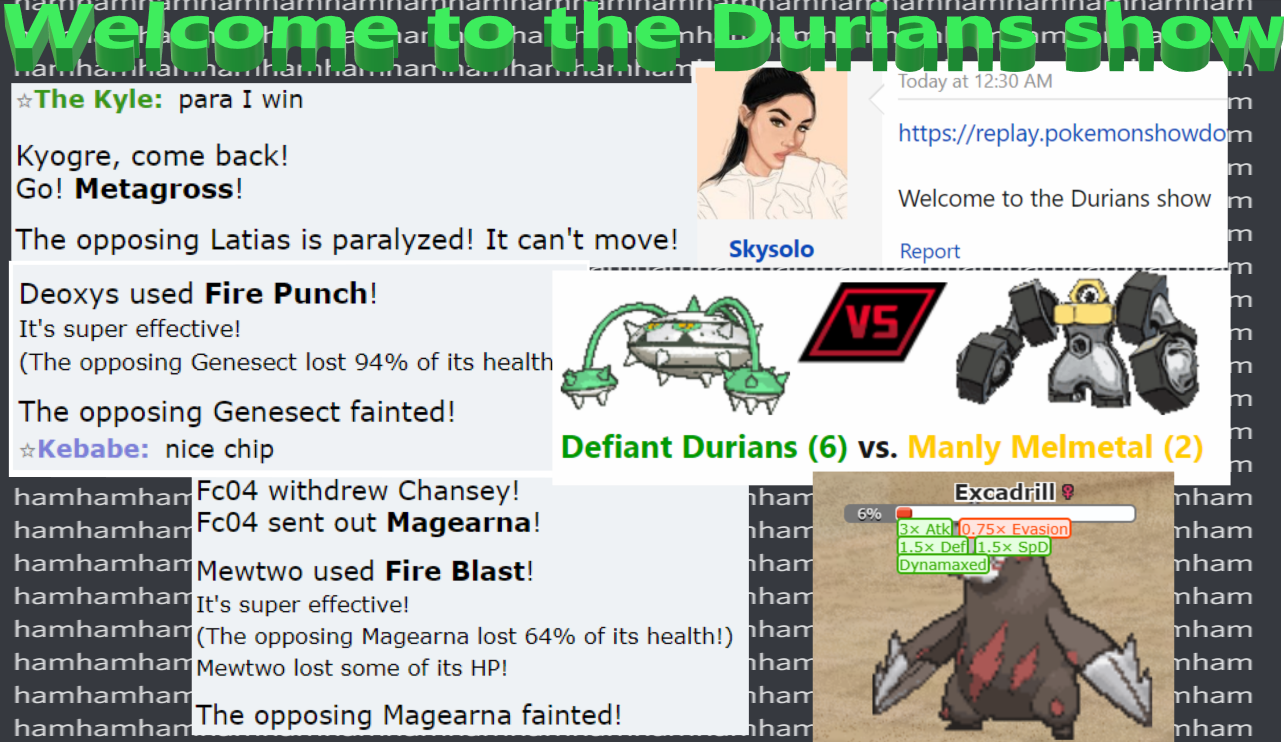 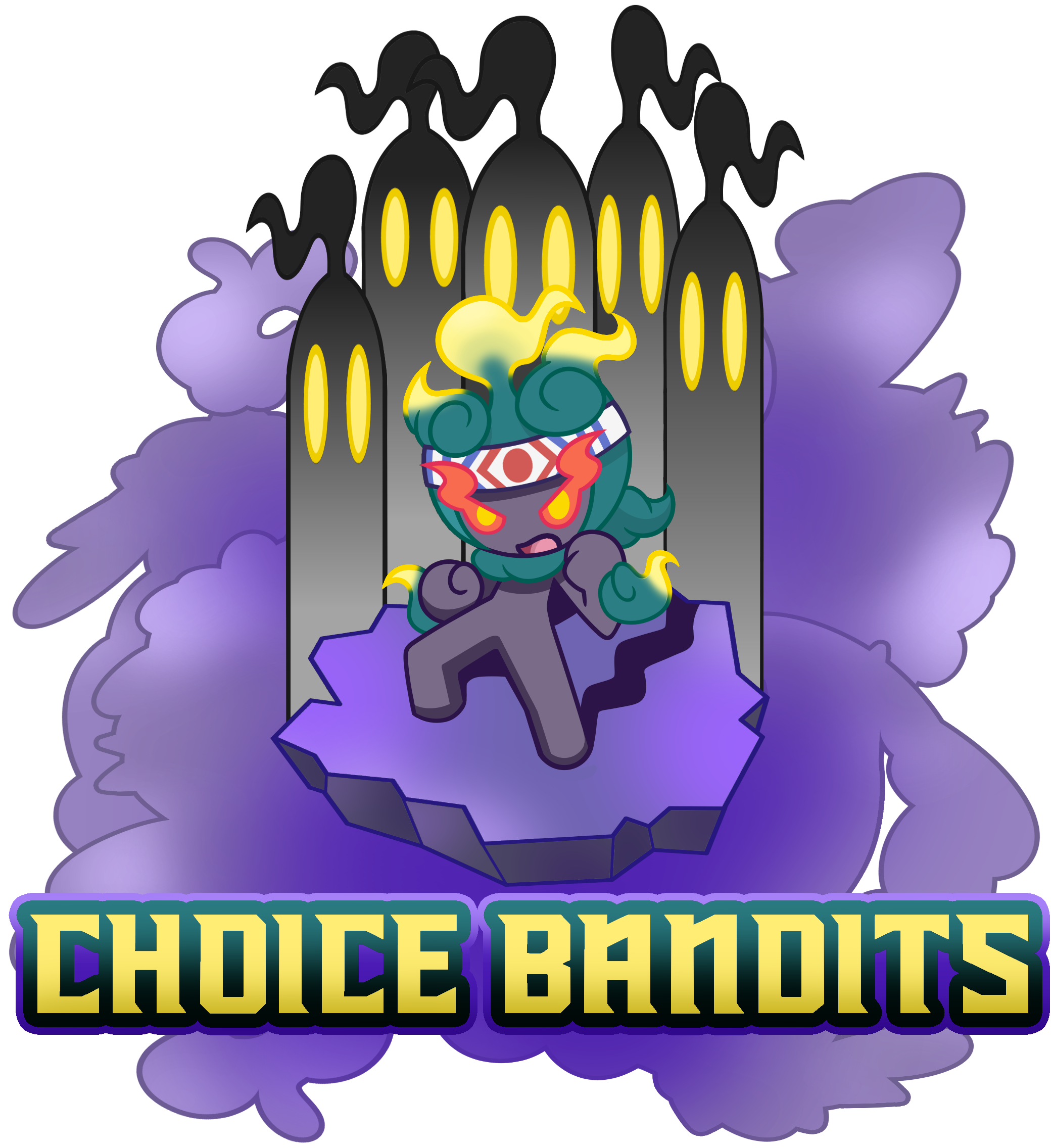 Thanks you so much Brumirage for this awesome logo

Notes:
- There are a few things right now that I am updating or fixing, but if you see a mistake let me know
- It's an xlsx file but you should be able to open it in sheets regardless

The intent to trade a player or a player’s retention rights must be communicated to the UPL host prior to the start of Week 1, and in the case of retention rights, prior to auction. Trades will not be effective until the host receives identical confirmation from both managers.
Click to expand...

Heavy Duty Ho-Ohs have traded Melle2402 to Dapper Dracovish in exchange for hs. Trade will take effect at the start of Week 3.
Click to expand...

Minority can we get an explanation on how the mentioned rule about trades was ignored and we have a player trade at the end of week 2? It's really weird that a rule was ignored/bypassed/forgotten and we have no explanation as to why that was done.

SparksBlade said:
Minority can we get an explanation on how the mentioned rule about trades was ignored and we have a player trade at the end of week 2? It's really weird that a rule was ignored/bypassed/forgotten and we have no explanation as to why that was done.
Click to expand...

As with many other choices that have been made in this tour, from retentions to allowing Dialgas to sellback p2, standards consistent with SPL have been followed. The rule you quote is outdated and all decisions are ultimately up to host discretion regardless.

Minority said:
As with many other choices that have been made in this tour, from retentions to allowing Dialgas to sellback p2, standards consistent with SPL have been followed. The rule you quote is outdated and all decisions are ultimately up to host discretion regardless.
Click to expand...

The retention rule was followed as per the commencement thread, and the p2 sellback is a special case, but I don't see how a mid-tour trade is comparable to the latter. SPL doesn't do mid-tour trades except for when there is midseason, so this trade decision isn't consistent with SPL.

You broke a rule without referring it or explaining why an exception was made, you haven't updated the rules or made an announcement if the same rule still stands or not, and you haven't explained if such trades are still possible in the future or not. And if such trades are possible, what really are the circumstances that allow the rule to be bypassed.