and whitequeen- to make it even more lovely imma rmt it next week :*

he was on vacation for over half the time until deadline when i was available to play, and i accommodated him. now it's germany's turn to accommodate me. TDs feel free to verify this by checking our VM history on my wall

sorry to the specs for this. I really am unable to play. were I able to, I would. this was a recent development because I'm with family older than me and they are controlling the itenerary. the fact that i can make this post at all is a miracle

east can confirm I have a team ready to play and I'm not johning. I'm sure they could find a sub if needed but that would not be an equitable situation and originally there wasn't even a deadline and this is the finals of a trophy tour so -

Subbing in gr8astard over Stathakis.

...so Christ was sacrificed once to take away the sins of many; and he will appear a second time, not to bear sin, but to bring salvation to those who are waiting for him.

So are we waiting for my brother Zamrock to be subbed in?

it's so cute when you think anyone cares marinara dragon :')

I am really pissed by last day matches and forcing extensions by not being available that day..10 days are enough in my eyes.. Its no offense to Louk, I love you bro! Not to IFM as well, RL> Pokemon of course, just in general.

But I am really pissed because of the johning, everybody wants to be the MVP or whatever.

Its just a game, just get online and play..

also i want to know what happened with Fakes- BKC. i have heard, different stories. One told me, that BKC originally intended that he has no time for this game today. so everyone is free not to play a game and ignore the DL without any punishments?

its not like, its always the same team who is johning around matches...The Tournament director should imo take this more serious, also not for this final but also for future events as well. im pissed as well ^^

A little late perhaps, but Germany deserves. You have my support. Good luck.

Stone_Cold said:
Subbing in gr8astard over Stathakis.
Click to expand...

side note: what is with no one posting their replays? and remedy is updating the replay thread at a snails pace.

Hi scofield, we are now in the Showdown age and not NetBattle anymore. To see replays, please click on the following link and type in the user's name, unless that person is a (BAN ME PLEASE) and plays under an alt.

P.S. Every time I see xtra' team or a Crawdaunt in the team preview on the ladder, I'm like:

when u take odds into ur hands n u get it

won against quaggster in a thriller, gg I was recently challenged by a Facebook friend to a post a picture of my cat for the next 9 days and to tag two people who love their cat as much as I do.
I nominate users Pearl and Alastor Law to post their kitty pictures.

Here's Pikachu still trying to squeeze himself inside a shoebox even though he's too big for it now. 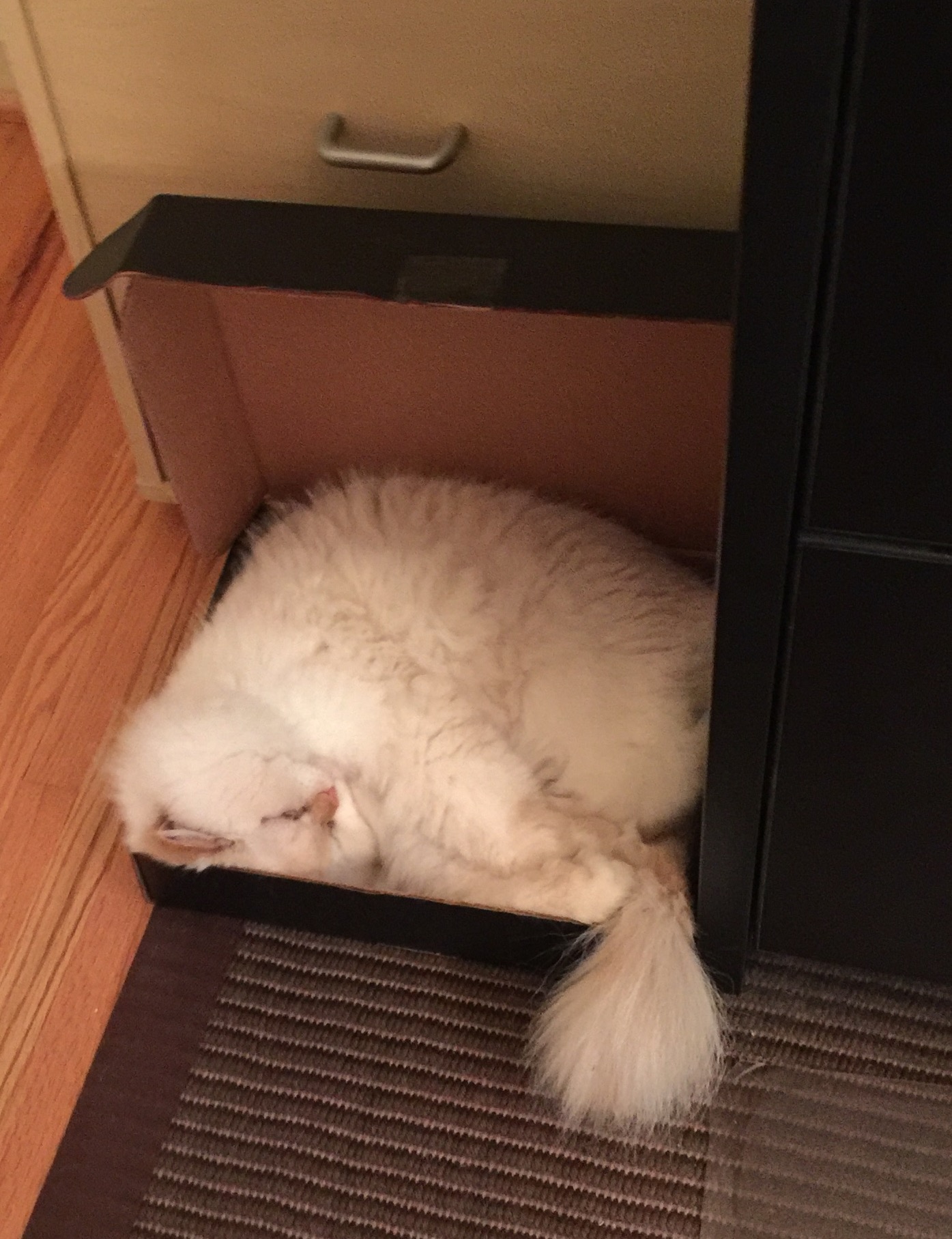 a quality human being

i just watched the game between stathakis and quaggster and i think it was a choke on quaggsters part. quaggster probably ignored the fact that hurricane could hit dragonite even through fly. had he known or had someone told him about it, he would have probably won.

like i said germans oras lineup isnt very strong, i dont think they are even in the top8 of this tournament actually, their builds clearly lack some inventive. because of this and their mediocre plays they are doomed to fail.

and yet they made it this far

WhiteQueen can you please get tele under control

WhiteQueen said:
I was recently challenged by a Facebook friend to a post a picture of my cat for the next 9 days and to tag two people who love their cat as much as I do.
I nominate users Pearl and Alastor Law to post their kitty pictures.
Click to expand...

won't be posting cat pictures for 9 days because I'm a lazy ass, but here's a fresh picture of my cat :D While Tele is completely off the mark regarding the Germans bringing inventive builds (Quaggster's team was pretty cool ngl), he was right on the money regarding who should've won that game. I don't understand how he didn't just win with Dragonite from there, he just had a very good match up in general and didn't capitalize on it.

Despite what had been said before that there would be no more deadlines, we felt the need to make a exception here for a some reasons. First, the TD team was made aware that BKC had missed the scheduled time when Fakes was already about to leave, leaving no time to force East to sub someone else in. Giving out an activity loss without giving the team a chance to sub someone else in would be quite unfair. Secondly, in our conversation Fakes himself insisted on playing BKC today and asked for the extension.

Furthermore, deadlines in Pokémon are to ensure that games get played, allowing a tournament to move along at a steady pace. A deadline doesn't fulfill any inherent purpose beyond that. As such, giving this extension causes no harm to any other party and, especially since both players wanted it, we saw little reason to not do it.

This post should've been made yesterday, so sorry about that. Everyone involved was already aware of the decision though, so I'm mostly just making it official here.

Also, M Dragon is on vacation and with very little internet access, so direct anything related to this to any other TD who's online at the time. He, as the host of this tournament, has been made aware of this decision too.

Good luck to both players, and please just get this game done Fakes and BKC :)

Thats seriously bullshit, the TDs have not the balls to give us the goddamn activity for johning Fakes 3 times.

"Its finals why would you give activity"
Yeah I know my team is to nice, because we play after the rules, whatever hope Fakes wins, everything else would be dumb.

I talked a lot with east players, they know I don't have a problem to lose vs them, but I do have problem with bullshitting us.

For example BKC said he had "internet problems", but he logged on directly after Louk beat Quag. Hello are you kidding me?

Decision is made etc. Extension from thursday to friday to saturday, cool stuff.

Fakes please do it for us, I know if one can save us the finals, its you!