smh Lkjc, Monsareeasy Le Creme Brule and Vrji posting before I even make my post smh...

So the 2v2 Doubles VR council has decided after a voting tie and community favor to revert back to ranks, as it keeps us consistent with our oldgens. As for what we're going to start put in in those tiers, I've decided to take a different approach than what we've done before, inspired by what a few other subforums have been doing: Personal Viability Rankings.

Essentially, what we're going to start with is people giving their takes on which pokemon should be ranked, and where. I've created a tiermaker to help facilitate such a thing, which you can find here. Here's an example that I made in about 5 minutes: 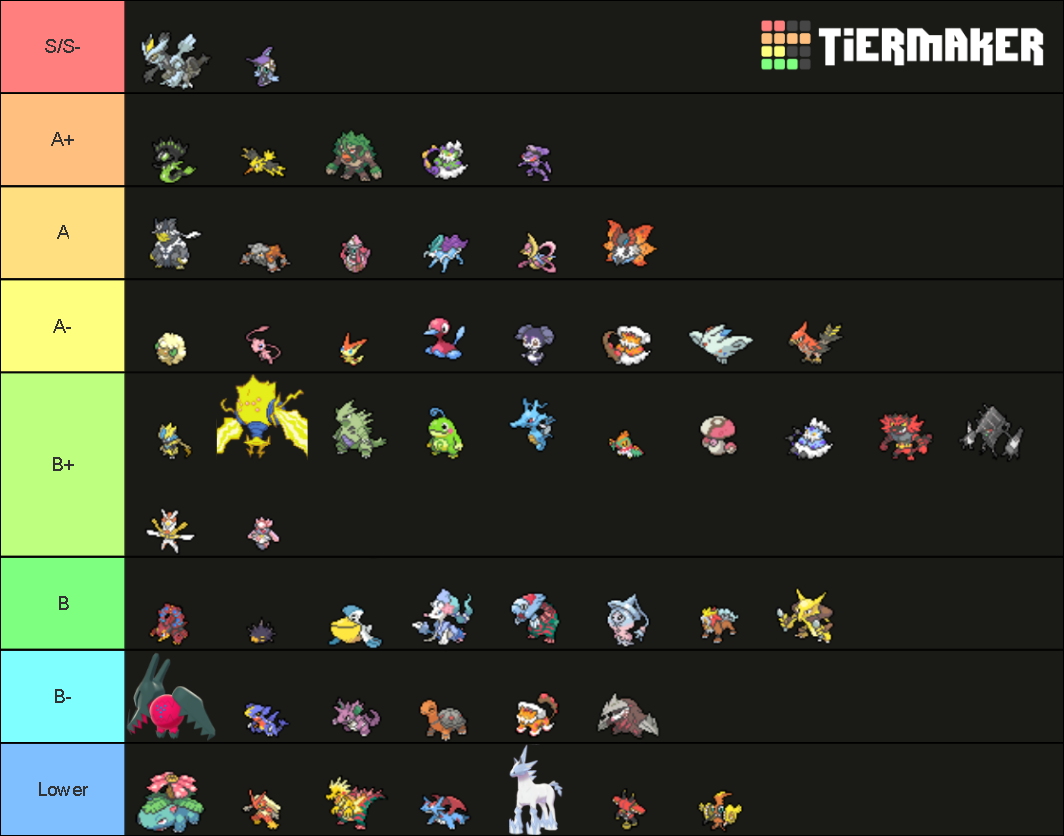 (the pool of pokemon was decided by the initial prelim vr and peoples thoughts on what should initially be added for examination) ​
We will average out the responses that we get on the thread, do a little QC, and make a VR from there.

Why take this approach, some might ask? A particular part of the community has expressed their desire to be more a part of the initial process of the VR's creation, and I hope such a project would appeal to those people. Also, a bit more thread activity never hurts. 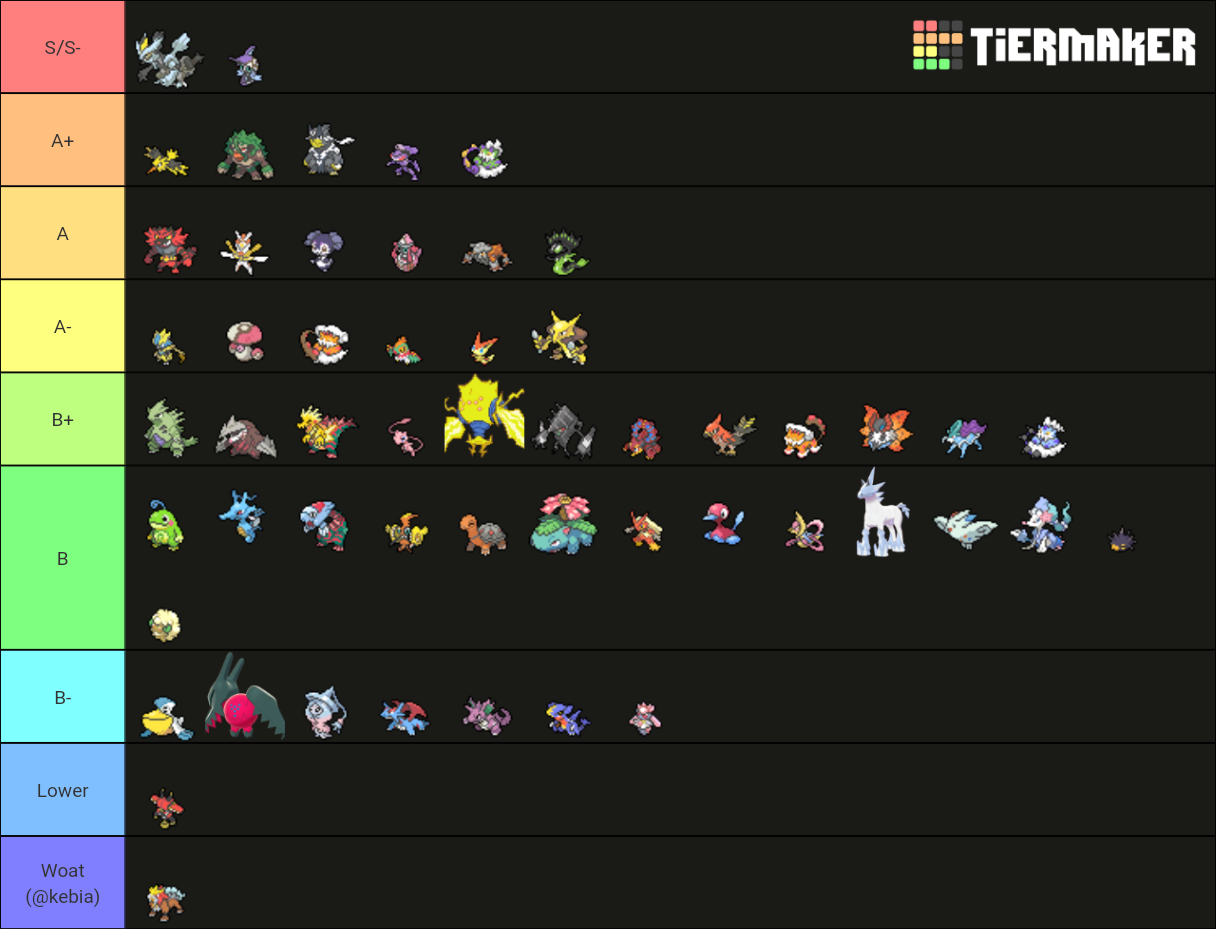 My personal vr, still pretty fluid rn except for the 2 s tiers which I'm pretty confident in for now. The tier is taking shape now but there's a fair few things on there that I could have my mind changed on. There's a few things that were omitted that I'd add in the lower tiers, some fun stuff like Glowking and Kabutops and also Zam is supposed to be in B+ but this shit is fiddly on mobile and I'm not arsed to go back and fix it. I intend to do a more in depth vr breakdown after pl when the meta is better established and when I'm not as busy with uni. 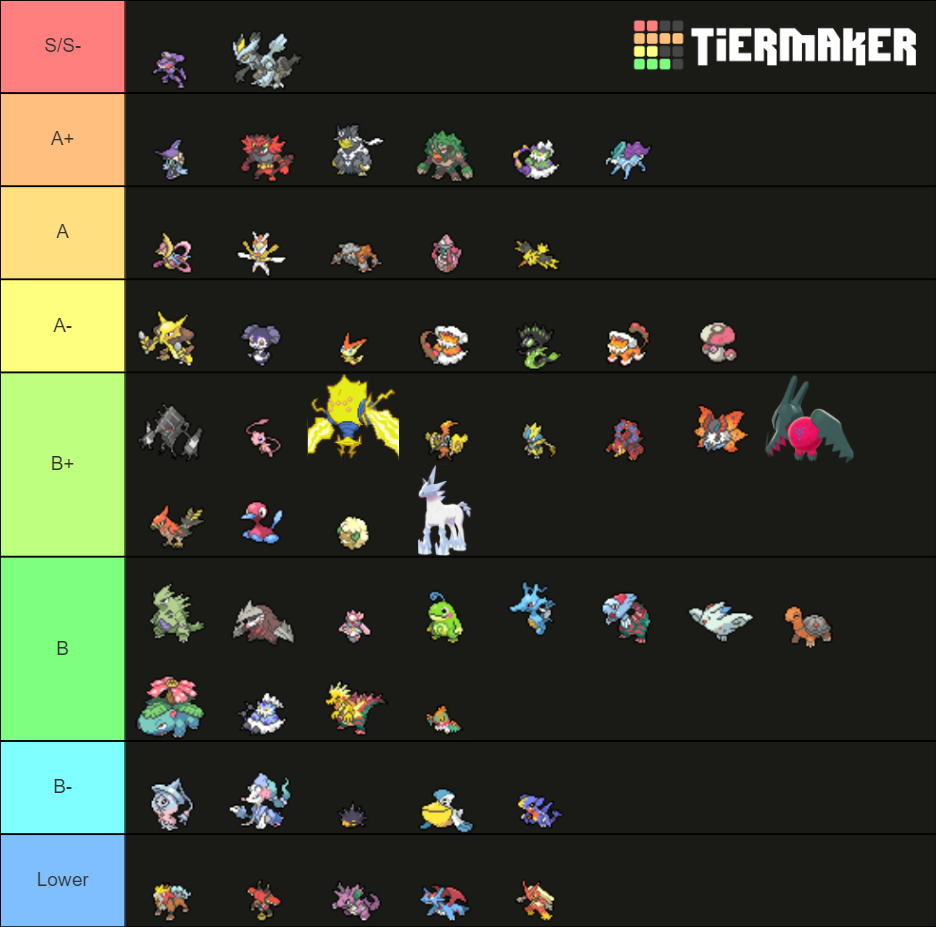 opinions may change throughout 2v2pl '-'

zam should probably be b+

With the results in and averaged, here is our starting VR:

Hey guys, Mubs didn't feel like putting all the mons in for the VR, so I did it for him!

Also because of this, Mubs didn't get a chance to say that Le Creme Brule is the newest member of the SWSH 2v2 VR Council (me)

Surprised no ones made an ally switch callout post here yet so I guess I’ll do it. My PL team is 10-0 in SS as of writing this so I am qualified.

The difference between protect and ally switch in 2v2 is that a protect prediction can correlate to other things in the battle, and there are strategies that can punish a protect. Protect has an exponentially decreasing success rate, so you know if the opponent used protect in the previous turn that it is highly unlikely that they will use protect again. Ally switch does not have a decreasing success rate, it can be used as many times in a row that the user wants with no drawback, which is a huge factor in how unpredictable ally switch is. Protect also has common counters like feint and one of the best mons in the meta, Urshifu. Strategies can also be used to soft punish a protect if you don’t want to hard predict and double attack the Pokémon that doesn’t use protect.

There are extremely few counters to ally switch, I can list all of them right now and explain why they are all flawed ways to counter the move. Fake Out, Taunt, Imprison, spread moves, and hard prediction. Fake out can only be used on turn one, so the opponent can just protect turn 1 and nullify fake out. Taunt can only be used after ally switch, so you have to predict wether they would even use ally switch in order to try to stop them from using it again. Imprison has limited distribution with ally switch, the only relevant mons with access to both are Mew and Necrozma, and the only mon you would realistically run it on is Mew. Spread moves hit only 1 ally switch user super effectively (heat wave on genesect), so you aren’t going to do reliable damage to beat an opposing ally switch user. Hard prediction is a 50/50 every single time so it is fundamentally unreliable. The most reliable way to punish ally switch in doubles is switching into something that can threaten both the ally switch user and it’s partner, but sadly that is not possible in 2v2.

Ally Switch abusers (S to B+)

- Very powerful offensive presence which allows it to use ally switch pretty freely because the opponent probably doesn’t predict it before you use it.

- Same here although there is a little bit of 4 mss because you want pyro, hjk, gunk, tect, switch, and tect, but luckily for you ally switch can be used to win the matchups where any of the other moves are preferred.

- Very powerful with the meteor beam boost, which makes people more likely to target it with moves so it can pull off a switch easier and force mind games.

- Has psychic terrain to block fake out so it can use ally switch freely turn one.

(rip gen 8 mew sprite) - Ally switch abuser that also stops opposing ally switch if it wants, combined with the classic transform to remove a mon from the game.

- Nobody expects the ally switch latios.

With the essential end of the regular season of 2v2 PL II and the additions of both Mishimono and Le Creme Brule to the council, here is our VR shifts!

Drops:
With the end of this year approaching, I'd like to say a few things, along with outlining my plans for the upcoming year.

First of all, I'd like to thank everyone who's put time into this meta. Whether it's contributing to the hubs of discussion, or just signing up for the tournaments we've done this year, it's been greatly appreciated. Although I've planned out a lot of the things I put into action months in advance, I never really thought we'd get this far, especially not in the span of roughly over a year. 2020's been a wacky one, and I'm thankful that you spent a little bit of it with us.

As for what comes in the future, there's a bit planned. For example, our developing tournament schedule, analyses, further oldgens development, and more that I haven't really fleshed out. Hopefully we'll grow some more and become more established.

Well, that's it from me. As always, thanks for reading and have a nice day. Mubs out.
Last edited: Dec 25, 2020
You must log in or register to reply here.
Share:
Reddit Pinterest Tumblr WhatsApp Email Link