If you have a different issue, there is probably another thread somewhere related to that topic:

Want to ask a question and not report a bug? Use the Simple Question Simple Answer thread.
Having trouble connecting to the main server? Use the Technical Support thread.
Want to request a feature? Use the Suggestions thread.
If your bug is about the Damage Calculator, it has its own dedicated thread.
If your issue is with the current-gen sprites, check the Model Fixing thread.
Got a really terrible Random Battle set? Report it in the Singles or Doubles thread.

In all cases, be sure to read the first post of the thread you're posting in!
Rules
Before reporting a bug,
If you are posting a large screenshot, please put HIDE tags around it. [HIDE]a screenshot[/HIDE]

NOT BUGS
- Air Lock and Cloud Nine do not actually end weather or prevent weather from beginning, just stop its effects while the Pokemon is active.
- Hypnosis, Sand Attack, Glare, Eerie Impulse, and Gastro Acid can hit Dark, Flying, Ghost, Ground, and Steel types, respectively. The only Status move that checks type immunity is Thunder Wave.
- Sheer Force prevents the user's Life Orb recoil and Shell Bell recovery, as well as the target's Color Change, Emergency Exit, Pickpocket, Wimp Out, Red Card, Eject Button, Kee Berry, and Maranga Berry from activating only when using moves that have a secondary effect removed by Sheer Force.
- Speed Boost does not activate on the turn you switch in: yes, this is different from most other abilities/items that activate at the end of a turn.
- If Fake Out didn't cause a flinch, your opponent probably had Shield Dust or Inner Focus, or your Pokemon had Sheer Force.
- Wish doesn't take effect if the Pokemon in its place faints the turn it would've healed it.
- Wonder Guard is not an immunity: Shedinja is not immune to Ground: it takes damage from Spikes. Shedinja is not immune to Poison: it is still affected by Toxic
- That Pokemon taking incorrect hazard damage is probably a Zoroark (which is a Dark, not a Bug, lolololol)
- Payback boosts damage for moving second, whether or not damage was taken. Also, since Gen 5, its power is not doubled if the opponent switches.
- Pursuit will deal double damage immediately before any switch-out, as long as Pursuit has not been used at regular priority yet. This includes U-turn and Volt Switch, but not Baton Pass.
- Sucker Punch fails if the target uses a faster priority move.
- Illusion, Air Balloon, Destiny Bond, Wonder Guard, etc only take effect if the damage was from a move, not an indirect effect such as entry hazards, Poison damage, etc.
- Destiny Bond lasts until the move user makes another move (or would've made another move, if not for confusion or Truant or a similar effect).
- Focus Sash and Sturdy affect all move damage (including static damage moves like Final Gambit, Seismic Toss, SonicBoom, and Counter).
- Outrage/Thrash/Petal Dance can be stopped during effect and not cause confusion if Protect/Detect is used on the second turn of a three-turn duration.
- If the user faints from Iron Barbs/Rough Skin/Rocky Helmet damage, Rapid Spin does not remove hazards, and Knock Off does not remove the target's item.
- Since Gen 5, a Flying-type Pokemon holding Iron Ball takes neutral damage from Ground-type moves regardless of its other type(s), unless another effect is also grounding it.
- Roost removes the user's Flying type for the rest of the turn only if the user was successfully healed.
- A status condition remains on a Pokemon even if it later gains a typing that makes it immune to that status condition.
- Doom Desire/Future Sight do not get boosts from the user's item or Ability if the user is not active when the move hits.

ALSO NOT BUGS (XY Mechanics)
- Arceus is affected by Trick or Treat and Forest's Curse.
- The turn a Pokemon Mega Evolves, its place in turn order is decided before Mega Evolution actually happens. Thus, Mega Banette's Prankster will only be effective after the first turn, while a Chlorophyll Venusaur will still be likely to move first under sun the turn it Mega Evolves. This idea also applies to previous gens: e.g. in Doubles, if a Pokemon is paralyzed by a foe, its turn order won't be affected that turn.
- Ghosts cannot be trapped by any means.
- When used by a Poison type, Toxic has a No Guard-like effect, never missing even during semi-invulnerable turns.
- Powder moves, as well as the Effect Spore Ability, don't affect Pokemon with the Grass type, the Overcoat Ability, or Safety Googles.
- Sound moves, as well as the Infiltrator Ability, bypass substitutes.

EVEN MORE NOT BUGS (SM Mechanics)
- Dark types are immune to Status moves used by opposing Pokemon with Prankster.
- Unlike Gen 6, turn order is now decided after Mega Evolution, so, for example, Mega Pinsir will act on its 105 base Speed the turn it Mega Evolves rather than the turns after.
- Terrains only benefit grounded Pokemon. For example, Celesteela would still be hit by priority moves under the effects of Psychic Terrain.

NOT BUGS 3.0 (SS Mechanics)
- Weight-based moves (Heavy Slam, Low Kick, etc.) fails when used against a dynamaxed target.
- Heavy-Duty Boots is a held item that negate all hazards, so Pokémon using this won't take Stealth Rock damage or get poisoned by Toxic Spikes.


There are three types of damage: Move damage, residual damage, and direct damage.

Most abilities, moves, and items that affect damage will only affect one type of damage: either move damage or residual damage. There are zero effects that apply to direct damage. The only effect that applies to both move and residual damage is Heatproof.

Examples of move damage:
- damage dealt, during a move that hits, to the target(s) of a Physical or Special move
- includes static damage: Final Gambit, Seismic Toss, SonicBoom, and Counter
- does not include the secondary target of Flame Burst (which would be residual damage)

Examples of direct damage:
- hurting yourself in confusion
- damaging yourself during Substitute, Curse, Belly Drum, or Struggle (but not the damage to your opponent, if applicable)
- does NOT include other forms of recoil (which would be residual damage)

water and grass pledge doesn’t work together anymore, they doesn’t make the swamp and cut the speed

Not a bug, thats how it works in game (turn 1 I assume)

What? Who are you responding to?

2nd_Slash said:
What? Who are you responding to?
Click to expand...

It's an error from the validator, should have probably specified.

Original Color Magearna AND shiny magearna were released as rewards for completing pokemon HOME’s national dex. (The reward was originally shiny magearna, but changed to original color very soon after the release.). Therefore, they should be legal in national dex AG. Also, poke HOME changed the appearance of magearna’s shiny form. All of these problems are aesthetic, but they are bugs nonetheless.

On Gen 7 OU, if you search the pokemon "Shedinja" then click "Import/Export" then where it says sample sets. There is one called "Showdown Usage". When I click on it, it does nothing 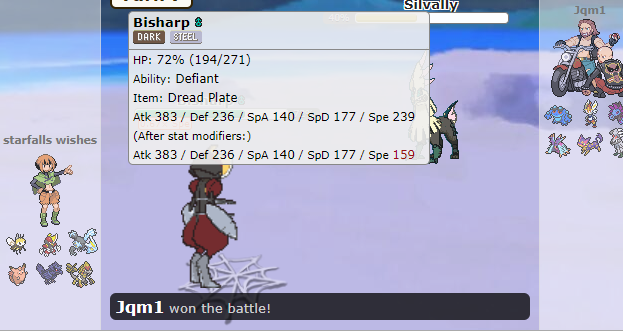 defiant isnt working on ladder
edit: I only have this problem with webs
Last edited: Feb 17, 2020

defiant isnt working on ladder
edit: I only have this problem with webs
Click to expand...

Zacian and Zamazenta behave differently in Balanced Hackmons and Pure Hackmons even though both formats are supposed to simulate the same on-cart behaviour. I'm not 100% certain that this is a bug, but at this point I am like...97.456% certain that it is (though I don't know which format's implementation is correct), so I'm posting it here:-

If this is somehow correct behaviour, I would very much appreciate any kind of explanation. Thank-you!

Before using Court Change (turn 5), the Aurora Veil is supposed to stay another 2 turns, aka should end turn 7.

The Aurora Veil successfully ends turn 7, but turn 6 it displays Aurora Veil (4 or 7 turns) instead of showing what it used to show before Court Change have been used.

I think this may have something to do with Baton Pass, because Umbreon stoped loosing HP when it used the move.

Perrserker's hidden ability Steely Spirit is not applying the 1.5x modifier to allies in doubles, only to itself.

Counter is supposed to "Deal damage to the opposing Pokemon equal to twice the damage dealt by the last move used in the battle." Counter will fail if "the last move used by either side did 0 damage and was not Confuse Ray, Conversion...Reflect" etc.

Unless the wording of the Smogon page for counter is incorrect, this would suggest that on move 38 of the replay above counter should have worked - explosion (killing starmie), followed by reflect and then counter.

Darmanitan-Galar-Zen can be selected in the Teambuilder, but in battle turns out to be Unovan Darmanitan (albeit with Zen Mode).

I tested it with both Suicune and Deoxys and it didn't work in either case. I then tested it with unaware Quagsire and pressure worked as intended. Then I tested it with cute charm Clefable (not in the replay) and pressure did nothing in that case. I'm not going to go through every Pokemon but I have established that, for whatever reason, pressure doesn't work on Clefable. Is there a hidden mechanic I'm missing?

I tested it with both Suicune and Deoxys and it didn't work in either case. I then tested it with unaware Quagsire and pressure worked as intended. Then I tested it with cute charm Clefable (not in the replay) and pressure did nothing in that case. I'm not going to go through every Pokemon but I have established that, for whatever reason, pressure doesn't work on Clefable. Is there a hidden mechanic I'm missing?
Click to expand...

Pressure only works on moves that target the Pressurer. Aromatherapy affects your party and Mega Kick was aimed to Deoxys.

MISSING DATA:
There are no specific details (obtainable from the '/dt cotton down' command line) regarding to what degree Cotton Down affects speed.
I get that we're waiting on Bulbapedia and Serebii to copy each other before we copy them (which is lazy imo) but it would be nice to know in the meantime, if we know and nobody has formally written it.

OPStellar said:
MISSING DATA:
There are no specific details (obtainable from the '/dt cotton down' command line) regarding to what degree Cotton Down affects speed.
I get that we're waiting on Bulbapedia and Serebii to copy each other before we copy them (which is lazy imo) but it would be nice to know in the meantime, if we know and nobody has formally written it.

Cotton Down is -1 Speed.

There isn't any such data for G-Max Pokemon height, etc. as far as I know in the games. Even if there were, it has no impact on battles so it's trivial information at best.