BLOOD RAINS UPON THE SKY. ALL IS LOST. THE VOTE TIMES HAVE ARRIVED.

vote for your three favorite submissiongs before may 16th!!!

The Black Knight (ToadBrigade)
Ariella Lu (self-vote)
Black★Rock Shooter (Pika Xreme)
EDIT: Okay, forget rigging the votes. I'm tired of the guilt that comes with it. (My votes are in their original state now; I promise.)
Last edited: May 16, 2020

I didn’t think you were allowed to subtract votes, or is Sonichu so bad that an exception is allowed?

Heavyweapons Mann said:
I didn’t think you were allowed to subtract votes, or is Sonichu so bad that an exception is allowed?
Click to expand... 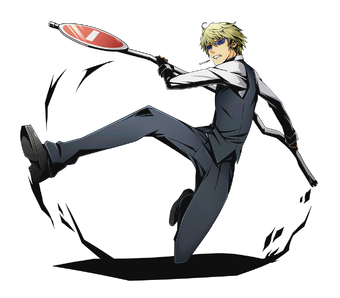 Congratulations to ToadBrigade, myself, and Gravity Monkey for winning with the Black Knight, Black Rock Shooter, and Shizuo "Doesn't Have Black In His Name" Heiwajima! Gravity Monkey has earned the title Christmas Comeback Crisis.

This is for characters who regularly wear hats (niceness optional). They don't have to always be wearing them, but it has to be a significant portion of the time - don't think you can sneak a character in for wearing a hat once or twice. Helmets, masks, etc. also count. Niceness of hat optional. Show your character fits the slate like so: **Oddjob**

This theme was suggested by Ninetales Dragons over Discord, and the slate ends on May 25th. Have fun! (Or don't.)​
Last edited: May 16, 2020

Reasoning: Smoker the White Hunter is a Marine officer and the Base Commander of G-5 Marine Base. Fighting and justified because they have the most fair and reasonable sense of justice in One Piece. Lugia because of his Smoke-Smoke Fruit, a fruit that allows the user to create, control, and transform into smoke at will. Moves are varied but mostly STAB, Normal, and Poison moves.
"Juvia lives for the ones that she loves! You've got to as well. If you have love in your life, then you must keep on living!"

Reasoning: Juvia Lockser is a Mage of Fairy Tail and is a former S-Class Mage of the now-disbanded Phantom Lord guild. And lover/stalker of Gray Fullbuster. Water type for obvious reasons. Drizzle because ever since her younger years, Juvia has had the ability to conjure rain, although she has no control over it, the rain appearing to merely be dictated by her emotional state. Until her fight Gray, she never even saw the sun, period. Rivalry because she is obsessed with Gray to the point of considering anyone who shows affection towards him a rival. And when Meredy threatened him, Juvia's resulting murderous intent scared even Erza. Logia because her body functions remarkably similar to a logia user. Movepool is full of Water attacks and Ice attacks from her connection and Unison Raid with Gray. Acid Armor from her liquid body. Attract, Draining Kiss, Charm, Play Rough, and Body Slam all represent things she wants to do to Gray.
Last edited: May 17, 2020

I’m pretty confused on how Chopper Ball changes forms. Maybe have it work so that it depends on whether Attack/Sp. Attack vs Defense/Sp. Defense is higher? 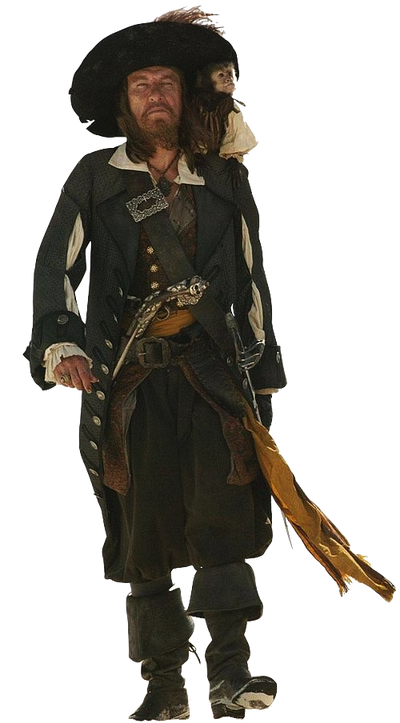 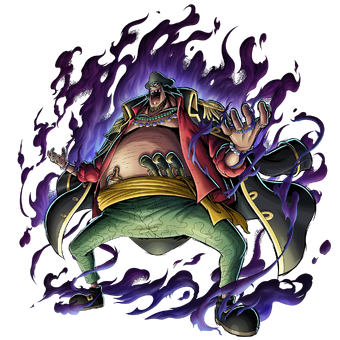 | 16 PP | This fails unless the user hit one or more Pokemon with a Dark-type Special move last turn. The Pokemon that were hit with the move are switched out.


Blackbeard @ Leftovers
Ability: Mold Breaker
EVs: 36 HP / 220 Atk / 252 SpA
Adamant Nature
- Seaquake
- Dark Matter
- Liberation
- Taunt
Reasoning: Blackbeard ate the Yami Yami no Mi, which allows him to create and control darkness. He sucks things into the darkness, and he can send them back out afterwards with Liberation. He also uses the darkness to negate Devil Fruit powers.

Blackbeard takes the abilities of Whitebeard's Gura Gura no Mi, allowing him to create vibrations. These vibrations in turn create massively powerful quakes. Quakes can even be generated in the air or sea.


Sabo @ Life Orb
Ability: Tough Claws
EVs: 252 Atk / 252 Spe / 4 SpD
Jolly Nature
- Dragon Dance
- Earthquake
- Close Combat
- Fire Punch
Reasoning: Sabo ate the Mera Mera no Mi, allowing him to create, control, and become fire. He generates large quantities of fire. If he is dispersed, he can reform. Sabo fights with dragon style martial arts, using dragon-themed attacks, like claws, which he reinforces with Haki. One of his attacks involves plunging claws into the ground and breaking it up. Sabo also uses a pipe as a weapon. 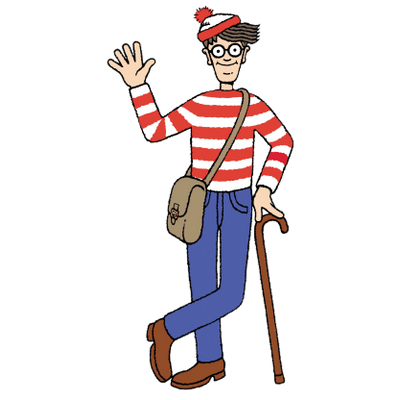 Waldo @ Leftovers
Ability: Where's Waldo / Technician
EVs: 252 HP / 4 Atk / 252 Spe
Jolly Nature
- S'more Keys
- Fake Out
- Circle Throw / Dragon Tail
- Will-O-Wisp / Substitute
Reasoning: Waldo is always hiding, usually in large crowds that sometimes feature lookalikes. He constantly moves from place to place without being noticed. He makes use of a large variety of items. His cane is one of them, which he can use to throw others, or bounce on like a pogo stick. He can use a flute to control a dragon. The new Where's Waldo? series features Wanderer Keys with different abilities, including a Grow Key, a Weather Key, a Pepper Key, and a Wave Key. There's the Slow Mo Key that slows things down, and S'more Keys that create marshmallows, chocolate, and graham crackers. 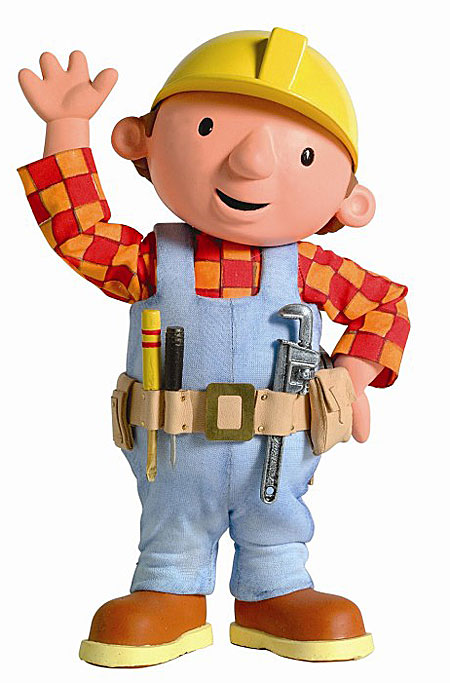 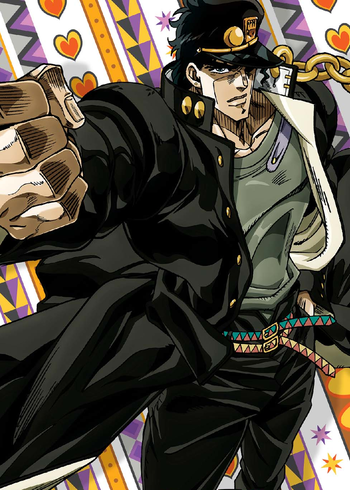 Pokemon: Jotaro Kujo
Type: Fighting/Ghost
Abilities: Iron Fist/Scrappy/Keen Eye
Signature Move: Star Finger
- Type: Ghost
- Classification: Physical
- Power: 90
- Accuracy: 100
- PP: 10 (max 16)
- Effect: If this move is used, the user cannot be immobilized by paralysis or infatuation. Has a high critical hit ratio.
Stats: 75/139/115/60/75/121 (Total: 585)
Notable Moves: Close Combat, Mach Punch, Bullet Punch, Shadow Punch, Meteor Mash, Comet Punch, Hammer Arm, Dizzy Punch, Mega Punch, Sky Uppercut, Focus Punch, Sucker Punch, Knock Off, Parting Shot, Focus Energy, Laser Focus, Calm Mind, Bulk Up, High Jump Kick, Jump Kick, Rock Smash, Brick Break, Zen Headbutt, Scary Face, Circle Throw, Storm Throw, Low Kick, Seismic Toss, Stone Edge, Earthquake, Aerial Ace, Acrobatics, Beat Up, Bulldoze, Taunt, Torment, Revenge, Reversal, Quick Guard, Leer, Fling, Superpower, Throat Chop, Thief, Detect, The World (see DIO)
Overview: Protagonist of the third part of Jojo's Bizarre Adventure, Jotaro is a delinquent high school student who gets involved in a race against time to save his mother from dying due to the presence of a certain evil vampire. Luckily for Jotaro, he has the power to take down anything that stands in his way, with his own Stand power, Star Platinum. Star Platinum is incredibly fast, powerful, and durable, with its preferred method of taking foes down being a good old fashioned pair of flying fists. Iron Fist and most of Jotaro's punching moves (and Close Combat) come from how Star Platinum fights. Jotaro also gets Scrappy, as his Stand allows him to punch ghosts. Keen Eye and Laser Focus come from Star Platinum's enhanced eyesight, and Jotaro's delinquent nature gives him many Dark type moves as well. Jotaro also gets Star Finger, a move where Jotaro focuses all of his energy into the tips of his fingers to unleash a simple yet effective attack. Finally, in the climax of Stardust Crusaders, Jotaro gains the power to use The World, as it turns out that Star Platinum and The World are the same type of Stand, which is also why the two have similar stats and the same two types (though in opposite order from each other). 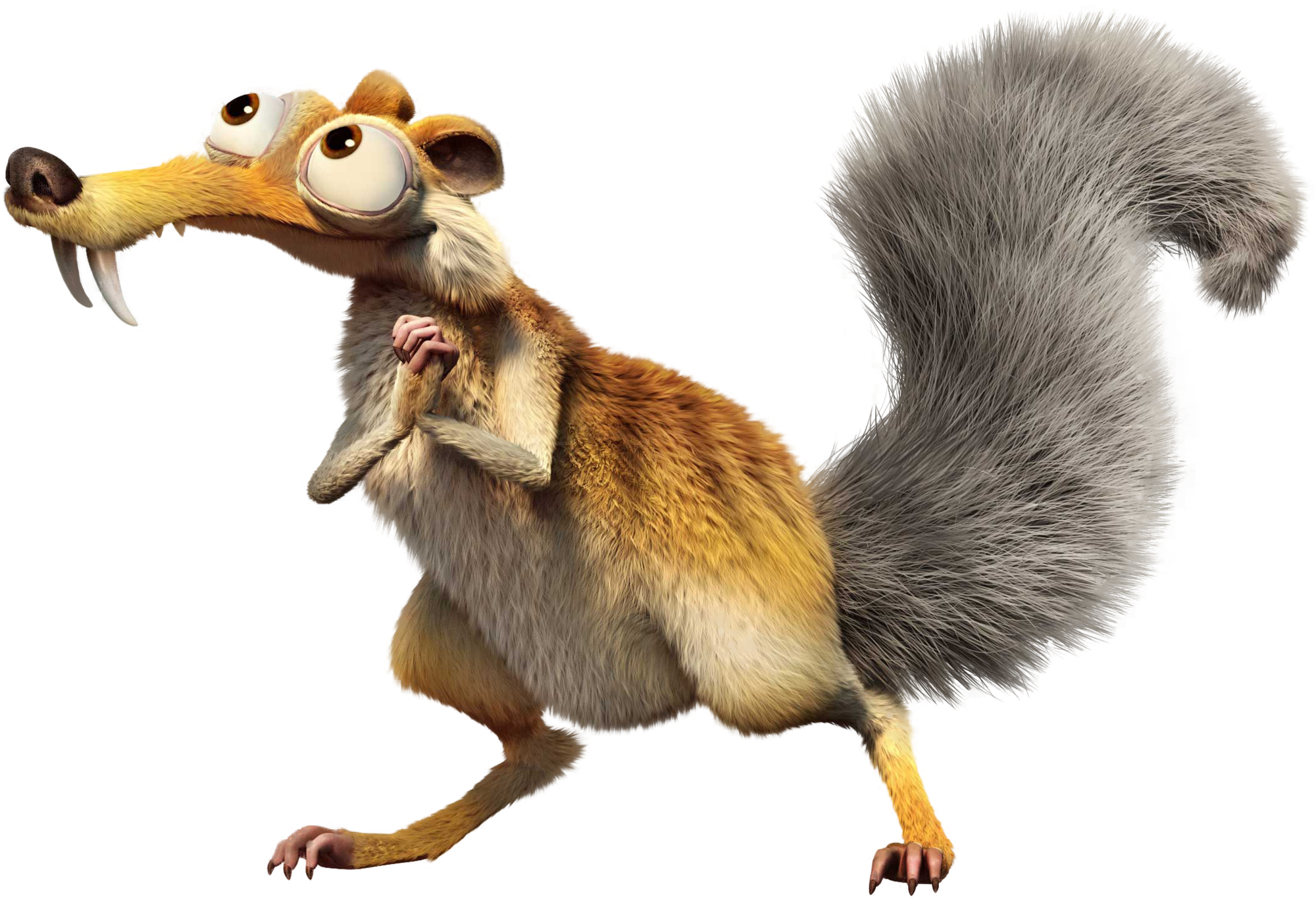 Disaquirr: If the user of this ability uses Bury Nut and it fails, one of the following moves will be used:

Reasoning: Scrat's character is that he always fails on storing his acorn and that triggers a big disaster. Disasquirr and Bury Acorn are there to reflect that. Scrat's high bulk is because Scrat is always being severely damaged but never dies. Hyper Voice is because he screams a lot, Bite and Crunch are because of his big mouth, Karate Chop is because he beat the shit out of some piranhas with karate-like moves, Body Slam and Return are basic moves that anyone with a body should probably be capable of doing, Stomp is because he stomps on the acorn to bury it, and ancient power is because he is from the ice age

Not the most competitive sub but I enjoyed making the concept of how this one works
Last edited: May 16, 2020 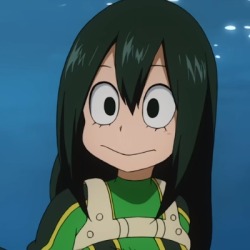 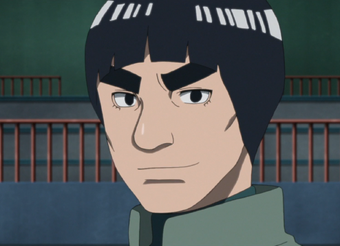 I regret everything. No bonus theme this time.

The slate ends on February 17th. Have fun!​
Click to expand...

Have we still not fixed the names for these?

Bmw6446 said:
Have we still not fixed the names for these?
Click to expand...

What do you mean? Sailor Moon was my favourite member of the Jedi Council.

And Dr. Doofenshmirtz is my favorite MHA character.

Bmw6446 said:
Have we still not fixed the names for these?
Click to expand... 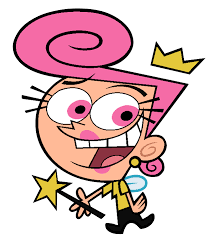 Boi has a Base, Mega AND Gigantamax form baby! (cuz he gets bigger lol) 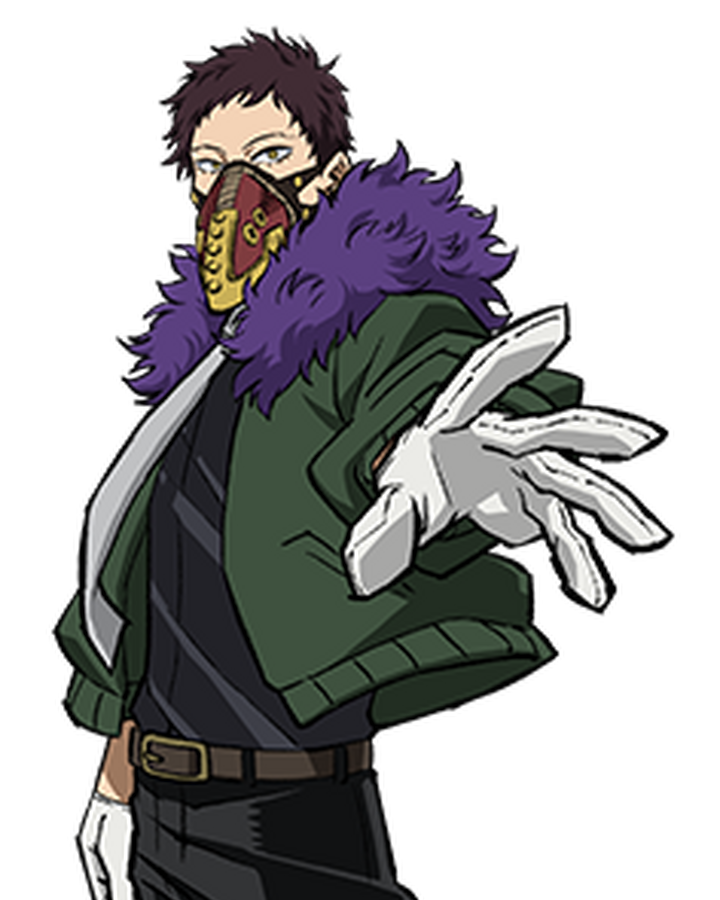 Ability: Regenerator / Poison Touch | Healer
Notable Moves: Poison Jab, Knock Off, Gunk Shot, Close Combat, Toxic Spikes, Spikes, Earthquake, Superpower, Stone Edge, Taunt, Nasty Plot, Dark Pulse, Snarl, Sludge Bomb, Confess*, Torment, Beat Up, U-turn, Bulk Up, Purify, Recover
Confess - Dark | Status | 8 PP | Forces the opponent to reveal their item and moveslots
Stats: 104 / 129 / 83 / 67 / 76 / 101 (560 BST)
Justification: Overhaul is a character from MHA and is the main villian of the first half of season 4. His quirk, Overhaul, allows him to disassemble and / or reassemble anything he touches, and his abilities reflect the various ways he uses the quirk throughout the series. Confess is a specifically a reference to when Overhaul fused with a character whose quirk has the same moniker. Spikes and Toxic Spikes represent how Overhaul reforms the ground into spikes to fight Lemillion and Deku. taunt references his tricky nature and what he does to his opponents constantly. Superpower because quirks are superpowers yadda yadda. 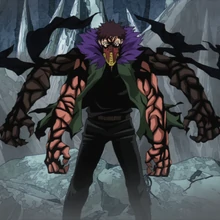 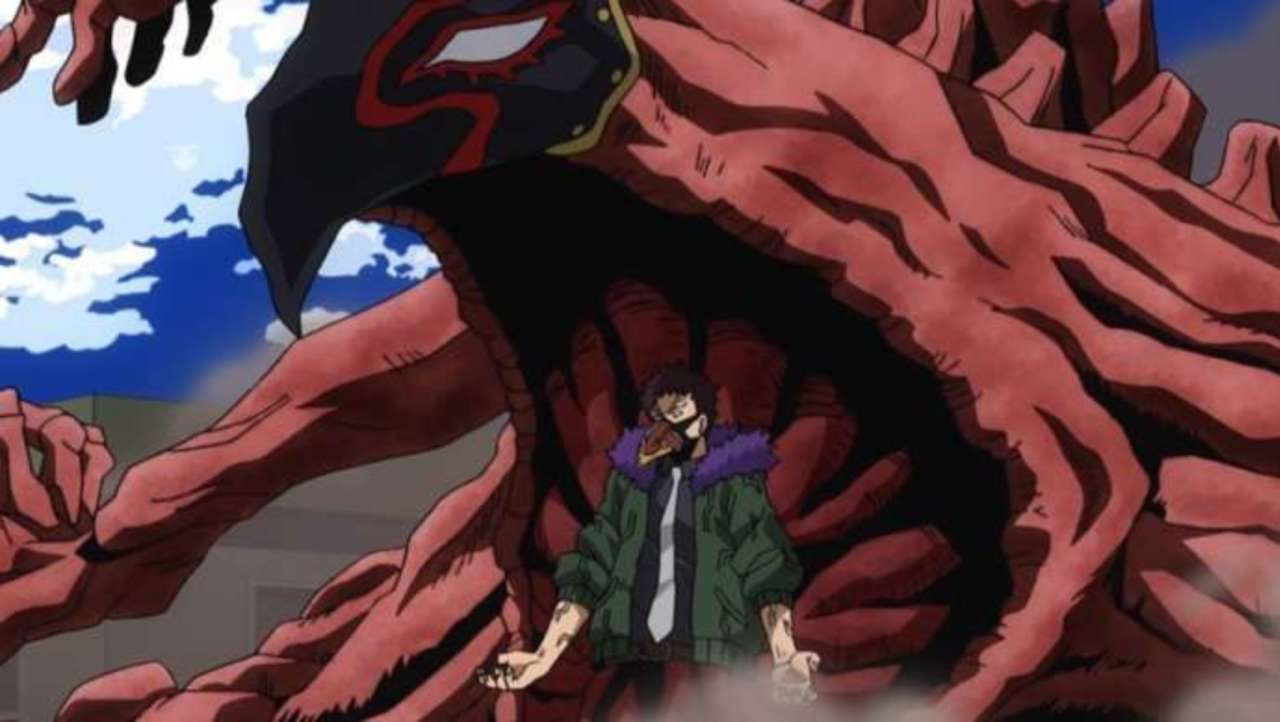 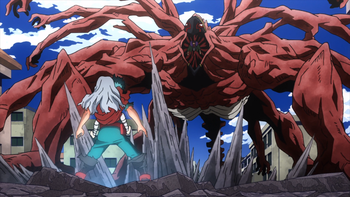 (size to Deku for comparison)
Name: Gigantamax Overhaul
G-Max Move: G-Max Life Drain | 130 BP | -- Accuracy | Heals the user of 100% of damage dealt to the foe. | Poison
Justification: Overhaul's final form used (briefly) against Infinite 100% Deku in the climax of the Overhaul arc. His G-Max move references the quirk of the person he fused with (who basically absorbs the vitality of his foes to get stronger). 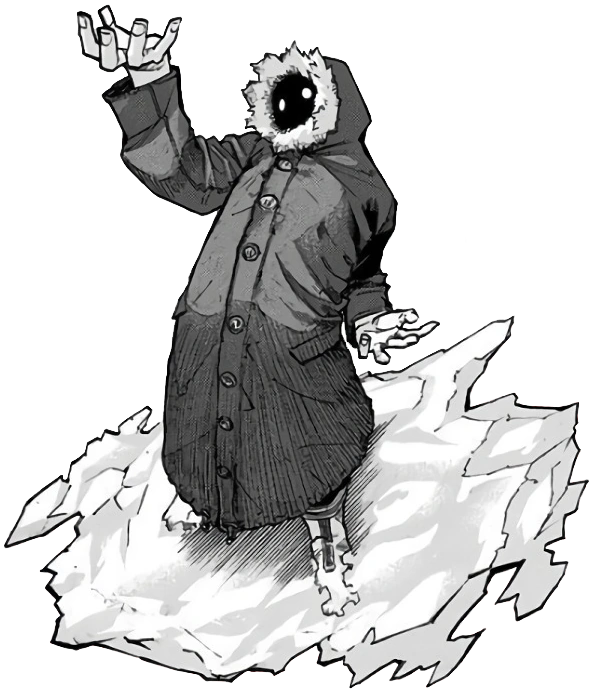