approved by the PU forum mods
OP stolen from the old thread and the UU version, with some changes made by myself 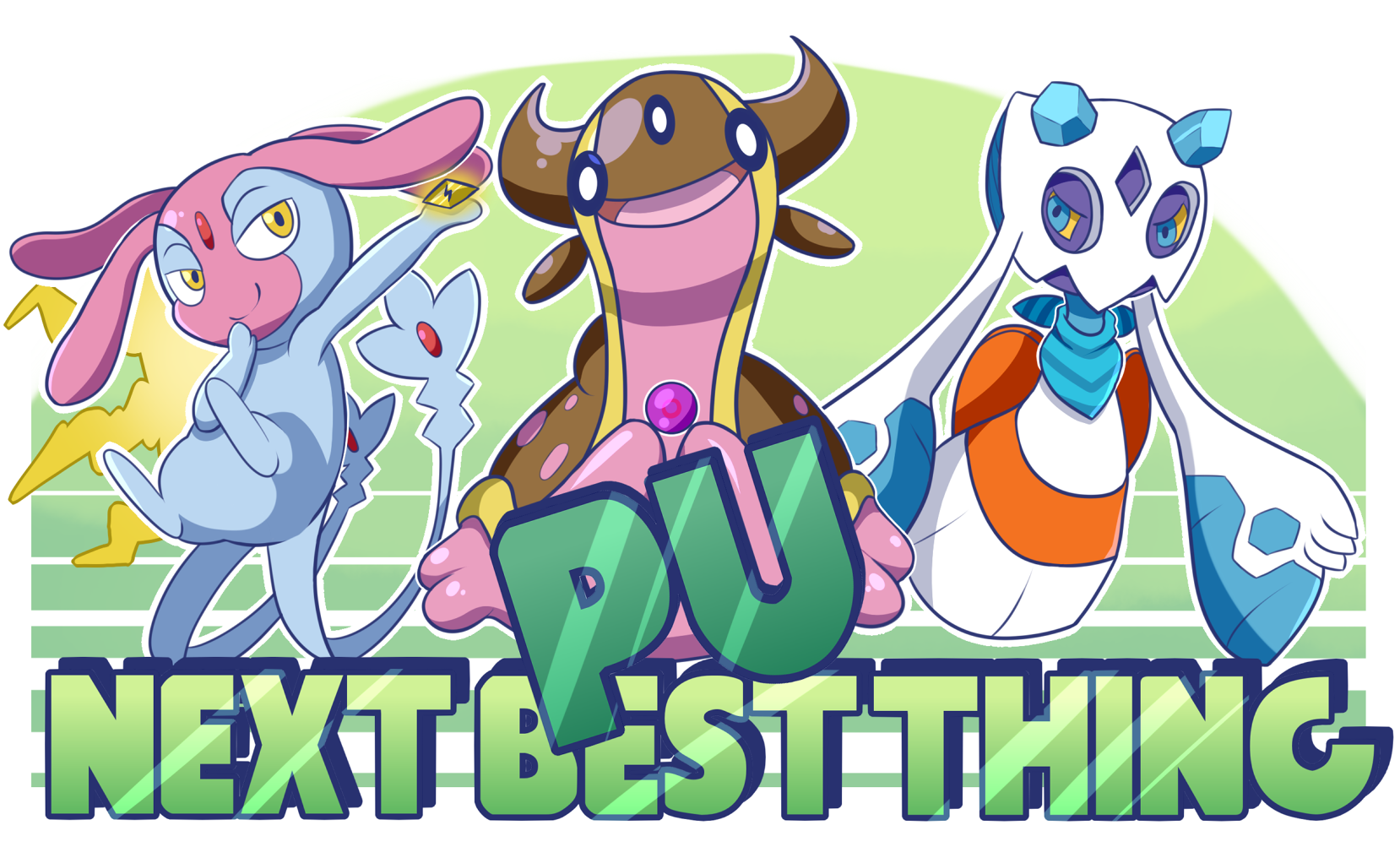 banner by BlueberryBlanket ​
Hello, and welcome to the newest PU Next Best Thing ! This project aims to discover sets for Pokemon in the PU metagame that may not be standard now, but actually work well enough to possibly become the new standard, or at least be quite effective. There are plenty of examples of new sets that have become just as standard as old sets or even overtaken them. As a community it is our goal in this thread to find new sets for established PU threats that may in time even be considered standard or at least close to it. If your favourite Pokemon is Basculin, don't worry, we'll cover even niche Pokemon to give them a chance to shine !

Each week I will choose a Pokemon on the Viability Rankings. You will have 4 days to come up with and post an original set for that Pokemon, along with an explanation of how the set works. In the 3 days after that, the community will vote on which set is the most creative as well as viable. By "original sets", I mean sets that are not already being given main sets on analyses (for Pokemon that do not have in progress analyses yet you will have to use your judgment on what is considered creative and uncommon enough to be worthy of a set here, you can send me a pm here, on Pokémon Showdown! or on Discord if you aren't sure).

When choosing a set to nominate, you should keep in mind how viable and how unique it is. Despite this project being about uniqueness, please refrain from posting overly gimmicky sets like Choice Specs Absol. However, your set should not simply be a standard set with a slight deviation either, such as Leftovers over Colbur Berry on Stealth Rock Mesprit, unless that change achieves something notable. That said, single move changes are generally okay as long as the new move does something specific that the normal set cannot do, such as breaking past a certain check or counter.

milk is a juice, spread the word

I know what you're thinking, and this set is technically viable. It's a mix between the Special Defog and AoA Skuntank sets that already exist but with a twist (Z-Memento). The aim of this set is to rack up as much damage with its STAB and break common walls/breakers then Z-Memento once it is low on HP. This set is essentially Z-Parting Shot but forces a switch on the opposing Pokemon, allowing you to setup. Skuntank has many sets that keep your opponent guessing but with this set, they'll never guess right and possibly lose multiple Pokemon because of it. Another thing this set has going for it is the two different instances to use the Z move. Consider this, if your opponent thinks you're about to Z-Memento he will stay in and switch out the next turn. However, you can counter this by going with Z-Dark Pulse and doing tons of damage. Now time for some calcs ;D.

They call me the kign of typos

This is a cool lure set I have used before(I run a lot more bulk on the original spread but this is fine). It lures in Aggron, Alolan Sandslash, and can even make Metang stay in on you thinking they can live a hit. You need to run Modest for the guaranteed OHKO on Aggron. It makes an excellent partner to Normal-types and Flying-types as most would assume it is just pursuit for the said Normal-type making it even more likly that they would go into there Steel-type, also just like the standard Acid Spray set it is still good for damage on Quagsire which helps things like Scyther and Oricorio-Pom-Pom which is something I think running Firium-Z doesn't do as well(you lose your STAB nuke because you need Z-Fire Blast to hit Aggron Hard enough Hidden power Fighting does this already letting you keep your Darkinium Z)

This is for BO teams that are trying to use Skunk in a more defensive capacity where it needs to helmet trade and check psychics/haunter/whatever but aren't using it as main removal because, well, you just lose to spikes long-term if it's supposed to be dying. Toxic instead can give it solid utility in not being ridiculously easy to switch into, on those kinds of teams I sometimes feel pressured that they have a completely free Skunk check in Gurdurr or Quagsire or Gastrodon or w/e and this set can definitely do some work. I only say it's limited to fat teams because normally you can't really give up one of your slots all that easily and this is where I've actually had the chance to run the set. 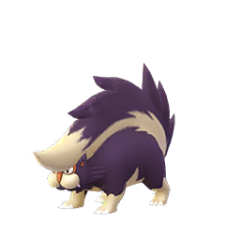 Credits to HJAD for this particular investment and to 2xTheTap for the general set.

I chose this set primarily for checking Lilligant. The Speed is for outspeeding Modest Jellicent, allowing you to still Pursuit trap it. The majority of the remaining investment is poured into bulk so it can take a +1 Breakneck Blitz from Lilligant. The Attack is just so Skuntank will have a little more offensive presence. In the case that you switch it directly into Breakneck Blitz, an additional Hyper Beam can kill it, but then the Lilligant has to recharge, which allows you to finish it off with almost anything. I would also like to add that it can also soft check things like Alolan Persian so it definitely is not only useful for checking one Pokemon.

This set aims to Badly Poison the opposing mon and wearing it down with a Venoshock afterwards. Venoshocks dmg output is doubled, when the opposing mon is poisoned / badly poisoned by eithr T-Spikes or a direct Toxic.
I've decided to go for Modest nature to have the raw power on all the special moves. Fire Blast is the coverage option for Steel Types, meanwhile Dark Pulse the second STAB.

Why does the gastrodon hold a LifeOrb in the Artwork ;_;

This set is designed for offensive teams. It was invented by a friend of mine in order to fix the weakness of Offense teams to opposing cheese like rain, trickroom and hail. The spread allows it to make subs that tank :
-carbink's moonblast (trickroom/stall)
-volbeat's uturn (rain)

Then it just keeps its sub intact and proceeds to toxic+stall out turns of cheese fields.

Other than that, the speed makes it faster than adamant kangaskhan. Sounds like a silly set at first glance, but if u dont have an spdef sandslash (or clefairy but who uses clefairy and mostly who sends clefairy on skuntank lol) ur team is gonna struggle a lot vs this cute dude.

Skuntank @ Darkinium Z
Ability: Aftermath
EVs: 4 HP / 252 Atk / 252 Spe
Jolly / Adamant Nature
- Sucker Punch
- Crunch
- Poison Jab
- Hone Claws​
Well, I was trying to find ways in which Skunk would be able to function as a more reliable physical attacker able to wallbreak without being limited to the Choice Band set. I ended up going for this Z-Hone Claws set that pretty much grants Skunk +2 Attack, notably making it just as strong as the banded set without it being limited to the first move the player clicks. With this you're able to 2HKO Sandslash-Alola with Crunch, and with the boosts, Skuntank turns into a slightly faster cleaner that can function similarly to Absol and Raticate-Alola without sacrificing the awful weaknesses or bad bulk of the last two.

Another way to alleviate the Fighting-type weakness is by going for Play Rough somewhere on this set, which notably 2HKOs Gurdurr at +2 but I couldn't choose which move to switch out, but that is definitely an option as well as Pursuit, which can be chosen depending on what your team requires, as well as being a great surprise factor to catch other Dark-types and Fighting-types that might want to switch in. Thank you for reading!
Last edited: Feb 25, 2019

So I actually used this set quite a bit when the meta had both Ferroseed and Gastrodon at the same time but it also works now that Alolaslash and Quag have risen a lot in usage. Specs might seem very lackluster at first considering Skuntank doesn't have the highest Special Attack, but it does have some surprise factor that also plays into how useful it was for me, mainly because Fire Blast and HP Grass are able to bop the aforementioned mons that very much don't mind switching into the common physical Defog Skunk. HP Grass can even 2HKO Mudsdale after a little bit of chip.

Say my days are numbered, but I keep wakin’ up

Is Lycanroc trying to Swords Dance against you? Is Carracosta or Omastar clicking Shell Smash too easily? How about Gurdurr trying for a free Bulk Up? Well Z-Snatch Skuntank is the answer to all of your problems! Not only can you steal stat boosts from the opposing Pokemon, you can even steal recovery moves from Gastrodon, Quagsire and Oricorio-G. Did I also mention the +2 Speed boost you get from using Z-Snatch which can turn Skuntank into a devastating late game cleaner?

This set is pretty nice as it allows Skuntank to threaten most hazards setters and not let them completely in for free. Ebelt is nice as Skuntank has a pretty large offensive movepool but Life Orb is also nice as it allows u to give up hp grass for Taunt. Cool set.

On a side note, I won't be here next week and KellyKafka has agreed to post the results and post next week's subject.
Last edited: Mar 1, 2019

The world is yours

Making Love Was Just For Fun...

Taskr is a beast so yeah he's got my vote! Z-Snatch FTW!

Ye, voting for that Z-Snatch set cause now I'll be paranoid bout that everytime I'm against a Skunk