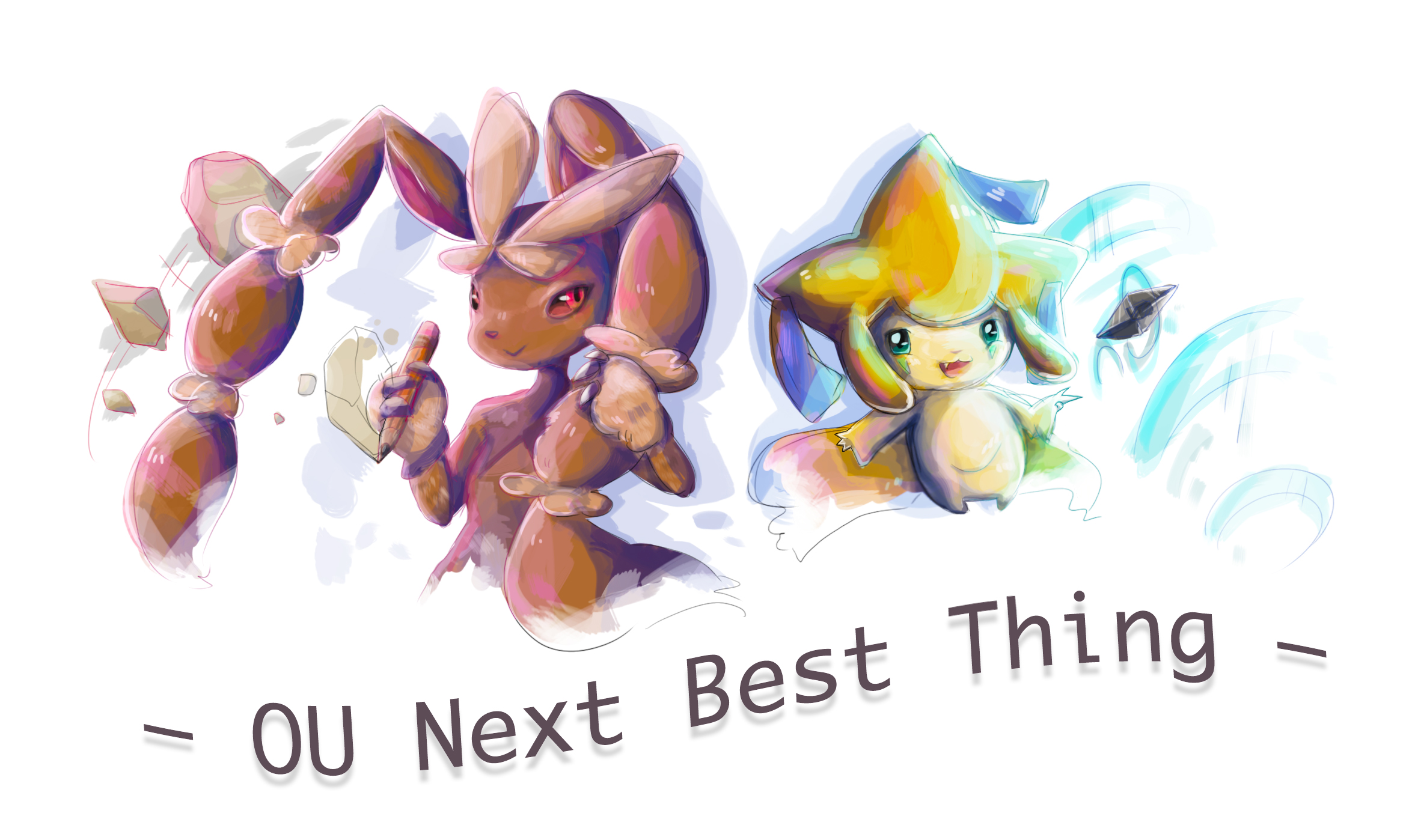 amazing banner by MamOwOswine | approved by Finchinator | OP adapted from last gen's version | hosted by Egor | co-hosted by Ruft
What is the Next Best Thing?
The Next Best Thing is a project where users search through the listed Pokemon's movepool and post about it. In your post, explain what is does and why it should be used over a standard set. Here are a few examples, courtesy of TPP, Anish and Finchinator, which can be found below!

click me!
Tangrowth by Finchinator
How does it work?
Every cycle a new Pokemon will be chosen for participants to create a new creative yet effective set, and this set should not be in progress of being written or already uploaded on the Smogdex. The participants will get 3-4 days to make their set and create their post. People may discuss the set posted during these days, the following two days there will be a vote to represent the most creative yet effective set. After the voting, the winner will have been announced and their post will be archived.

Hey guys, it's Egor again, and I continue to run the Next Best Thing from last generation! First of all, welcome my new co-host - Ruft! He will be helping me organize things here from now on. So, let the project begin!!!

The first our subjest is Dragapult! Blessed with one of the greatest offensive typings in Ghost, an unmatched Speed tier, and colorful attacking and utility movepool, Dragapult has quickly cemented itself as a top-tier threat! Dragapult is usually seen using sets like Choice Specs and Status Hex, but some more niche and even weird sets like Choice Scarf and Dragon Dance sometimes show up. Ok guys, show us your hot Dragapult stuff!

On another note cb is really bad and I can't really explain it so here's what I have instead:

Metronome Dragapult is an interesting take on Hex: first off, it heavily punishes passive play from the likes of Clefable and Sylveon by incrementing Hex damage quickly, and against other Pokemon that are passive to it, such as Body Press Corviknight, it can Substitute up on it, and spam secondary coverage moves. Thunder Wave is an alternate option to further cheese Fairy types into oblivion, and Dragon Pulse is if you need the secondary STAB for some targets (see: opposing Dragapult, Hydreigon)
Last edited: Jan 28, 2020

This set attempts to prevent the issues DD pult has with breaking through steels (particularly BU Corvik) via fire blast, allowing it to sweep even if corvik or ferro, which is also annoying to standard DD pult, is healthy. The other attacking move depends on if you'd rather lose to pex or fairies (phantom force is better overall). The EVs allow pult to 2hko SpD corvik after rocks and ohko ferro with fire blast, while the speed allows you to outspeed dug at +0.
Last edited: Jan 26, 2020

I am somewhat insane. This set is just fun but kinda stupid a lot of times out of not. Eject pack + Draco Meteor is just cool to give you momentum and QA + Sucker is just good priority to have on so that you can just clean up against potential scarfers who think that they can the jump on you.

A warlord once said "To trick the enemy, trick your ally beforehand". This set is meant to be played as the same as the Choice Specs variant, while hiding the ability to switches moves freely by not exposing it, unlike Life Orb. With the power of Expert Belt, it still manage to one hit defensive Ferrothorn with a Fire Blast, while still outspeed Choice Scarf Dracovish with the 421 speed. Thunderbolt is there for the likes of Pelipper, Toxapex and of course, Gyarados, which likes to abuse Choiced Dragapult to setup, which they will be so "shocked" when they found out it's not.

This thing is already a relic of a bygone era, and even though it's mostly outclassed by Grimmsnarl it has a niche in its access to U-Turn. It's a really fun set on HOs that rely on setup mons like Hawlucha to clean up, and also has some surprisingly solid mid game utility, like being able to OHKO sub Hydreigon regardless of whether it's already behind a sub or not.
DDarts can probably be replaced with like, Shadow Ball for better neutral coverage. I like having the extra punch, though.
Great to see this project back up and running again ^^

This is my spin on the Sub + Disable set. Double status is a cool technique that hinders all of the passive mons. With the lack of status removers in the meta outside of Clef, this can turn would be checks into setup targets.

This set does what it says, it does some damage with its STABs, pivots with U-Turn, and spams Thunder Wave brainlessly. Rather than try to handle its switchins with Fire Blast, Thunderbolt, Steel Wing, whatever the kids are running these days, Pult just cripples them or brings in something else for free. Remember, the best prediction is just clicking buttons.

First off, Eo gets full credit for coming up with this. I just have used it on a few teams myself since then. Air Balloon lets you hard counter almost all Conkeldurr, which is pretty huge in match-ups where you encounter it as otherwise you have to out-predict it in order to escape unharmed normally. This also helps you wall Hippowdon, most SR Kommo-O, and some Curse Snorlax (not most though). The main downside is that you will not have the passive recovery of Leftovers, but a lot of people are starting to run Spell Tag anyway (which someone should post, btw) and in the long haul you get Wish and Defog support on most teams in order to allow for longevity.

I don't think I really have to explain this one but, yeah, its basically a mix of twave + NP togekiss and KR cloy gone wrong. Double hax potential. Darts with rock wont do much but, beat up works. Add a twave into the mix and you can luck your way out of anything.

This thread got me thinking to try something out:

Been testing this on a stall team, it works well on certain things, not so great against others. It'd maybe be better with like a berry or something instead. It can beat some stuff that'd normally counter it though which is fun.

Rest Dragapult can take advantage of moreso bulky teams because when it gets statused by Toxapex as example it can rest its damage taken by the Toxic-Turns off in the long run and it can stay healthy, It can also Rest of damage it took during the long run of the game by direct-attacks.
Draco Meteor is its primary and Shadow Ball its secondary STAB to use, whereas the coverage move can be either Fire Blast to hit Ferrothorn and other steel-stypes such as Excadrill and Thunderbolt can hit Corviknight, Toxapex and Mandibuzz for super-effective damage.
Modest nature is choosen as it has a higher damage output and can have a better chance to get into a KO-range more easily. Leftis are there to give it some kind of longevity outside of the Move-Option in Rest.
Last edited: Jan 29, 2020

Ever choice locked into the wrong move on a bad prediction and lost the game because of it? Well say goodbye to miss click excuses and hello to gimmicky setup! Special Dragapult patches up the desperately lacking coverage that it oh so desires, however with a lack of special boosting moves, specs becomes the most reliable set for dealing consistent damage. Sub + Petaya berry alleviates the need to lock into one move and makes Dragapult a reliable endgame sweeper as if it never was. 12 HP evs get it to 320 hp allowing 3 subs to pop petaya berry. Timid nature if you fear the fish and modest if you're a man.

Hi, flawless creation here. Here's a very uncommon and underrated set that I have used on several teams that have allowed me to maintain high ladder (1850+) consistently.

Dragon Dance Dragapult isnt too common of a set, and the ones that I've seen usually don't run Life Orb + sucker punch. This is where this set shines. With an adamant nature, along with life orb, Dragapult actually hits significantly hard with its boosted base 120 attack and is a very potent late game cleaner. The first three moves are self explanatory, with sucker punch being incredibly useful as the 4th move. Sucker punch allows you to hit Aegislash before it can revenge weakened Dragapult with shadow sneak; it also prevents Choice Band Dugtrio & Cinderace from revenge killing you with sucker punch as well. Not to mention, it allows you to hit other Dragapult first if you're unboosted, as you're Adamant and will mostly likely be outsped by other + spe variants. This Dragapult hits extremely hard. Some damage calculations:

+1 252+ Atk Life Orb Dragapult Phantom Force vs. 252 HP / 0 Def Clefable: 386-454 (97.9 - 115.2%) -- 87.5% chance to OHKO after Leftovers recovery . High ladder is full of max HP and max Spdef Clefables, as players are desperate to have solid check to LO Nasty Plot Flash Cannon Hydreigon. Because a huge portion of them dont run any defense investment, +1 LO Phantom Force from this set actually OHKOes them from full. Obviously, the offensive LO ones also get OHKOed from this as well.

+1 252+ Atk Life Orb Dragapult Sucker Punch vs. 0 HP / 0 Def Aegislash-Shield: 231-273 (88.5 - 104.5%) -- 62.5% chance to OHKO after Stealth Rock. High ladder is infested with offensive Aegislash. The most common variants you will encounter are Choice Specs, Balloon SD, 4 Attacks LO, and Choice Band. All run 0 HP investment as they are all invested in max attack/special attack with max speed. All of these offensive variants unfortunately also have Shadow Sneak, which can be problematic as a max attack Shadow Sneak can do about 60-70% to you, not even counting CB/LO variants. This is where this set shines, as you can set up a DD, then when they attempt to revenge kill you with Shadow Sneak Aegislash you can actually sucker punch them first, kill them, and prevent yourself from getting revenge killed.

It's time to vote! It's great to see a wide variety of creative sets. Good job!
There are 13 nominations:

Remember, you can vote for one set but it can't be your own.
The deadline is Friday 31st of January.​