Ever played broken telephone (also known as "Chinese whispers"), where a group of people whisper a phrase down the line, and the final result is often completely different from the original? Well, that's the basis of this game, except with words and drawings instead.

If you'd like to participate in this round, sign up by posting in this thread and reading the rules below.

Reactions Contest Winner
In to win.

this is the golden age of something good I participate in you!

we're lost children of the sea

Telephone me up scotty

Jamming to the beat

Put me in, coach.

in lol this will be fun

Sign-ups are over now! Technically monomite signed up after the deadline, but I'll make an exception since I didn't post right after 6:00. Also, Tikitik has PMed me expressing interest in joining near the end of the round.

I've randomized the list of players and PMed the first player on the list. Don't forget to check your inboxes regularly!

Here are the results of Round 1!

I wrote:
Draw a well-known Smogon user getting in trouble. P Squared's wrote:
"A baby, a guy with stubble, and a kid are spooked by a flaming garbage can." Integer Mova wrote:
"A family of townspeople are running from the blazing podium." FellFromtheSky wrote:
"A burning opera house with its dignified patrons attempting to make a less than dignified escape." 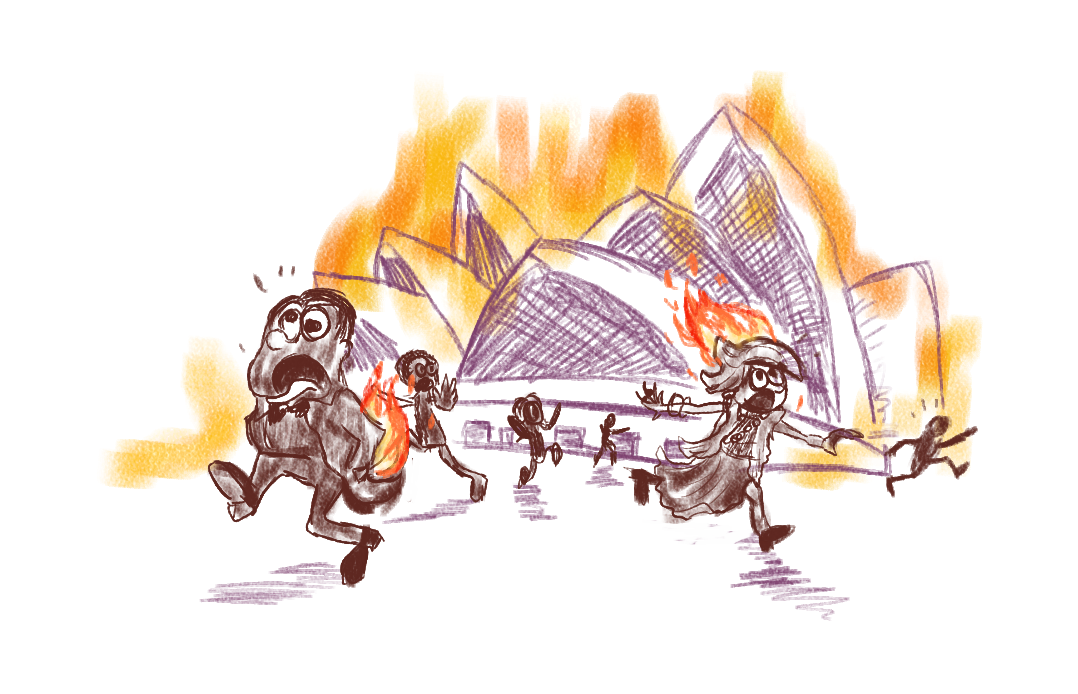 The Dutch Plumberjack wrote:
"I'm seeing a bunch of people running from an opera house." Most wrote:
"Monster with big teeth scaring away frightened villagers." Last but not least, Ssensenh concluded the round with this paragraph:
"rioting friends with pitchforks at a party scream for mercy as they flee from the animated pinch-pot monster towering over them, its gaping jaw lined with sharp teeth as big as the size of the friends' heads and its body wrapped snugly within a hot dog bread. a friend of the imminent pinch-pot monster looms in the distance."

And I just had to end the round there since Nico's description was perfect and I'll be busy for the rest of this week preparing for Toronto VGC 2017 (I love how the only thing that stayed consistent about this round was the freaked out people).

Oml. This was too fun and utterly hilarious princessofmusic. I love how I was able to introduce the opera house into the game. Haha! :>

ahh sorry for turning the opera house into a monster lol, this was rly fun ty!

This was quite fun to work with. How many more rounds are there?

Reactions Contest Winner
I love how TDP got the gist of the picture perfectly ... and then proceeded to leave out the single most important detail in his description, which in turn led the chain in a direction noone could have forseen. :'D

Absolutely amazing, how quickly we went from a simple burning barrel to a full-fledged maneating monster with teeth bigger than a human's head.
Last edited: May 9, 2017

free to be the greatest

Moderator
I just wanted to say that it's nice to see that all of you guys and girls are getting along so well and that you welcome opportunities to interact and collaborate with each other every now and then.
In my honest opinion I think that events like the "Picture Telephone" and the "Smeargle Studio's Annual Secret Santa" are considerably beneficial to the Smeargle Studio in the sense where they stimulate the beating heart of Smogon's artist community.

In other words, keep up the great work everybody!
I can't wait to see the results of the upcoming rounds!

FYI I drew WaterBomb and his two children dealing with a literal dumpster fire.

Layell said:
FYI I drew WaterBomb and his two children dealing with a literal dumpster fire.
Click to expand...