Grammar-Prose Team Queue: It's a Whole New World We Live In

Magearna's Mix and Mega analysis is ready for GP.

BW Tentacruel is ready for GP

BW Magnezone is ready for GP

also I am retiring this thread, I moved past gen analyses and in-game articles into the gen 8 forum just now so that we have all current forums under the same sub, which means that this one is p much entirely inactive at this point (until we get rid of it entirely) and there's no longer a need for separate queues

a major hater and a math minor

From December 2016 to October 2017, the queue received over 100 posts every month.
There are 223 posts in the queue from April 2017 alone.
Posts finally started slowing down starting in the summer of 2019.

Sunday was the most popular day for posts in the queue, with 707 / 4592 posts (15.4%), followed by Tuesday.
Wednesday was the least common day, though not by too much. 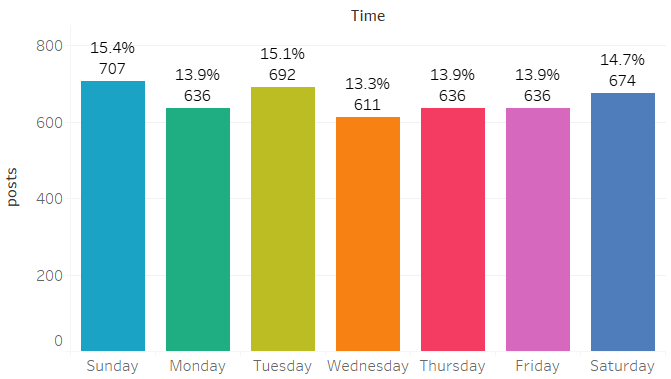 The most liked post in the thread is GatoDelFuego 's post announcing his retirement as GPTL, with 61 likes.

After that it's The Dutch Plumberjack 's post about their 2000th GP check in C&C, with 38 likes. (There are some stats there too!)


Data scraped with Python; minor processing done in R; graphs done with Tableau. I'll give a general shoutout to Smogon here for likely being a huge factor in me getting a job lol. Even with a graduate degree in statistics, I had essentially no work experience coming out of college and was probably not a particularly appealing applicant on paper. But I could talk about the posts I scraped from Smogon threads for various fun analyses and the signup graphs I made to show the huge spike in signups for OST 14, and I don't think it's a coincidence that the two places that ended up giving me multiple interviews were Twitch and a mobile gaming company lol.