a sky full of lighters ☆ So I didn't realize that shinny altaria was golden until after I finished and my little,bro said "pretty nice shinny altaria". :( I did use winter breeze for some of the yellowed colored effects. The rest was drawn,by me, or I used my own resources. Bummer said:
Oh DAISIES, need to try this out, just need to decide on which one I should pick. Just some additional yes/no questions tohugh:

Is it allowed to simply ADD another type to a mono-type?
Does a type recombination need to have have BOTH types replaced?
Click to expand...

1. If it's substantially different and interesting, sure why not :)
2. No, you can retype a dual-type to a mono-type if you want

It's lucidity. So clear!

I decided to go for the humorous route on this. All those contest accessories came in handy for me. For reference, this is what Hydreigon actually looks like.

EDIT: oh what fairy is real. Ok I guess this is fairy now. Ignore the label at the top. this was actually originally pkblizzard's idea and I wound up running away with it... How long is this open for and do the entry's need to be done digitally?
Thanks

Hollymon said:
How long is this open for and do the entry's need to be done digitally?
Thanks
Click to expand...

Entries do not need to be done digitally-- feel free to post any non-digital works.

Question: Must it be a completely new piece? I kind of want to re-draw one of the retypes I've done.

Sorry it looks a bit rushed

Yilx said:
Question: Must it be a completely new piece? I kind of want to re-draw one of the retypes I've done.
Click to expand...

For the piece itself, It needs to be something you drew/painted/etc after the topic was announced-- anything after may 18th is fair game. This isn't super-easy to verify, so just be courteous to other entrants with this one.

Concept wise, do anything. You may absolutely revisit an earlier retype, redo something old, re-illustrate an earlier concept, or anything along those lines.

Nobody asked this, but I'll say anyway--

If you do a piece for this thread and decide you want to do something else instead, no problem! You can post as many efforts as you'd like. You can only enter one piece into the poll, though, so just make sure we know which one to put up in the poll thread by the time the deadline rolls around.

Cool stuff being posted so far :) really glad to see all these entries! Why am I here?

It's still a polar bear (Electric-type Beartic). Why does Beartic have so few features?
My puns are as bad as my art. Why am I even submitting this :/

Sorry, I thought anteaters were real idk have an unfinished firetype swinub i guess 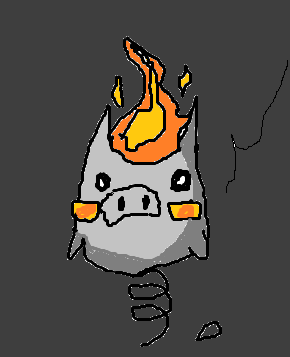 Lol man that's a Spoink, not a Swinub

Sorry, It's a bit rushed. Deadline is tomorrow so I kinda freaked out.

Wow, It's been a while since I contributed something. I was so busy with work; but things have calmed down and hopefully I can start being active again here on Smeagle Studios.

Anyone who's working on an entry, now's the time to finish it up quickly, because you have twelve hours left! Good luck n_n

Jamming to the beat she brings the rain